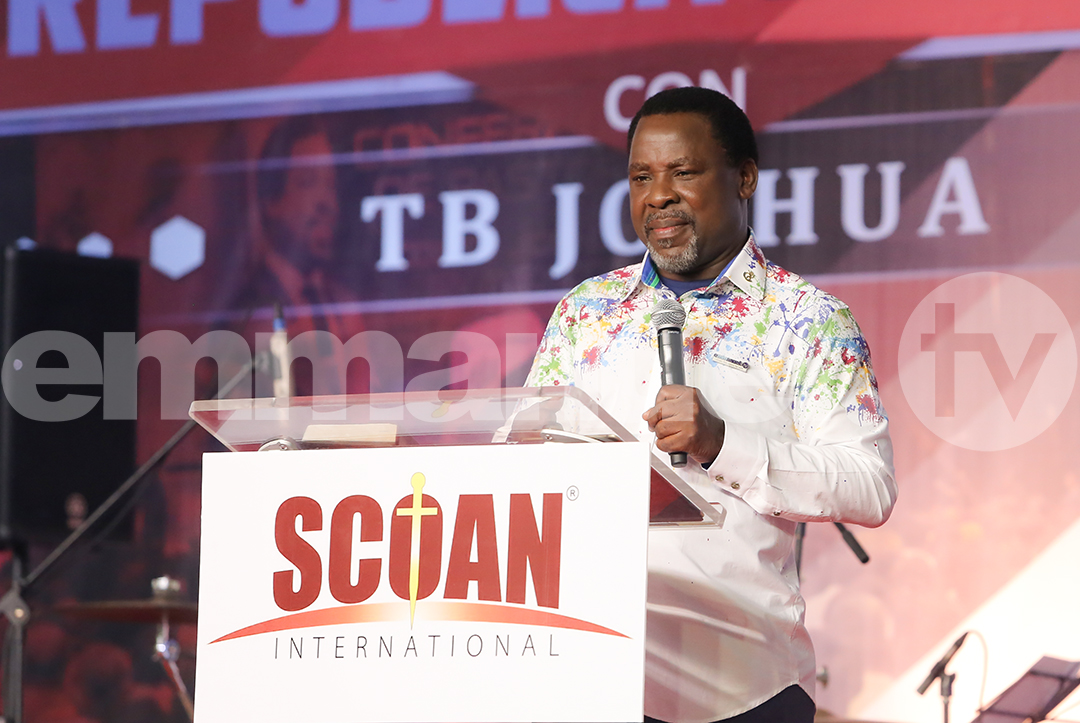 Prophet T.B. Joshua, under the leading of the Holy Spirit, mobilised huge human and material resources to the Caribbean nation of the Dominican Republic in late November 2017 for a two-day revival crusade for the entire nation as well as a one-day pastors’ conference for ministers of the Gospel. As would be expected, thousands trooped to the public revival not only from the Caribbean but also other parts of the world. Similarly, the pastors’ conference was a big opportunity to “kindle afresh the gift of God” in preachers of the Word. To the glory of God, thousands received healing, deliverance, breakthrough and salvation at the events.

He took his reading from 1 Corinthians 2:4,10-11 as he strongly encouraged participants to commit to serving God in Spirit in order to see the Word work wonders in their lives. He advised them to engage with God’s Word in an attitude of reverence and obedience. He said, “To be rooted, grounded in the Word, we need to search the Word and stand in reverence of it…. As we stand in reverence, the Spirit will be released. As we obey the Word, the Spirit will be released.”

Prophet T.B. Joshua further said that reflecting on the Word of God through the Spirit is a sure way to encounter the invincible power of Jesus Christ. In his words: “The Word takes the place of the unseen Christ. Meditate on it – it’s a visit with Him. The more we meditate on what we read, the more the Spirit acts on it…. I mean, the more the Word dominates our heart, the more it influences our conduct and character.”

Reading from Mark 16:18, Prophet T.B. Joshua spoke about how the Word of God brings about healing, deliverance and salvation. He said: “It is the Word that has taught us the value of the name, the authority of the name and our legal right of using the name Jesus Christ. God’s Word has priority over His name. We are saved by the Word. We are saved by the Gospel, which teaches us that Christ died on the Cross for our sin and rose from the dead.”

Prophet T.B. Joshua therefore advised the ministers to treat the Bible strictly as the spiritual book that it is, not as a secular document inspired by mere human wisdom. He said: “It is possible to know the Word and be sound in doctrine and never be converted…. It is not theory of the Word, it is not history of the Word that builds one up spiritually; we are only made spiritual by living in the Word and by the Word living in us. It is not only committing the Word to memory, which is valuable, but it is letting the Word become an integral part of our being.”

Testimonies Of Healing, Deliverance and Prophecies

At the end of the well-received sermon, Prophet T.B. Joshua went into the midst of the ministerial congregation to lay hands on every one of them. To the glory of God, many experienced a rekindling of the anointing while others received freedom from every form of ailment and spiritual bondage.

One of those who experienced healing was Yomaira, whose left arm was in a sling following a wrist fracture. Unable to work or do her daily chores because of the pain, Yomaira attended the event alongside her pastor husband, Abel. She also had a stomach ailment that made it difficult for her to eat at night, in addition to affecting her ability to sing.

After an anointed touch from Prophet T.B. Joshua, Yomaira received instant healing of her fractured hand and stomach. She said, “When the prophet prayed for me, I know that God touched me. From that moment, I didn’t need the sling anymore!” Pastor Abel said: “I am happy, content and grateful to God because He has brought peace and happiness to our lives.”

Pastor Cristián, an Argentinian Jew living in Panama, also testified that he had been at the Pastors’ Conference “because of what Jesus Christ has done in my life.” Cristian was referring to a mole that his doctors had feared might be cancerous. During the period that he was waiting for the doctors to give him their final verdict, Cristian said he engaged in fasting and praying and that Prophet T.B. Joshua appeared to him in the room to pray for him.

To God’s glory, on the day Cristian was to travel to the Dominican Republic, his doctors gave him great news: No cancer! At the Pastors’ Conference, God’s servant did lay hands on Cristian, who said: “Today the prophet prayed for me and the same thing that happened in my vision happened here! I didn’t know who T.B. Joshua was before and had never had any contact with him but this is what happened to me and I wanted to share my testimony.”

It was a story of healing and deliverance for Professor Walter, a nurse practitioner who is affiliated to the University of Miami and Florida International University. She testified about her healing from several health problems as well as her deliverance from the effects of witchcraft activities in the family. Professor Walter said that the witchcraft rituals had given her the spirit of anger and affected her career, in addition to preventing her from having stable relationships, including marriage.

Today she no longer threatens her husband with divorce, even as she now enjoys a peaceful heart, following a touch from God’s servant. She advised people to avoid taking their children to witch doctors.

Many were also located through words of prophecy during the Pastors’ Conference.

When the man of God said, “There is a woman there – she is bleeding. The bleeding has stopped now. She is there and was bleeding before she came here,” that word of prophecy was for Cristal, a citizen of the Dominican Republic, who had promptly come out to identify herself as she confirmed the prophecy in tears of joy, knowing that her problem was surely over. She said she had felt a movement in her stomach as the man of God mentioned her problem. “Thank You, Jesus!” she cried joyfully. During her testimony, alongside her husband and children, Cristal said: “Since then, my life has changed and I can see the power of God in my life. Thank You, Lord Jesus! Hallelujah!”

Rosanna from Miami, USA was also located via prophecy: “There is a woman there that will be going for an operation this week. She has been booked for an operation three times and tried to avoid it. Please come out; I want to counsel you. You will still go back to the operation; it will come out successfully. God will lead the doctor to do it.”

Rosanna confirmed that she had been booked three times for uterine fibroids surgery but had avoided it. A while later, she flew down to The SCOAN in Lagos, Nigeria to testify about how she had undergone a successful surgery in February 2018. Telling of how the prophetic word had brought deliverance to her from the torment of fibroids, she advised people to let their challenges bring them closer to God.

Another word of prophecy located Jennifer from the Dominican Republic. “There is a lady – you came here today prepared to leave your husband. You want to divorce but your husband loves you so much. But you still want to divorce. Please come out; the mind of God is very important before you take any action. Your husband is with you here…. I don’t want you to leave here and your husband will be disappointed that you have left home.”

Confirming the prophecy, Jennifer said: “I want to receive prayer for deliverance in my marriage.” Prophet T.B. Joshua then told her, “This is a marriage from God,” even as he reminded Jennifer about the problem of divorce that was affecting her family as a whole. With the prophecy, however, Jennifer and her husband, Robert, saw the Holy Ghost take over their union even as they committed to raising their then two-year-old child in an atmosphere of love.

There was also a word of prophecy for Patricia, a Guatemalan living in the USA: “A woman is here – your fibroid is coming out.” Patricia confirmed that she had been suffering from fibroids for the last two years. The fibroids had been pressing heavily against her bladder, causing her to wet herself anytime she coughed or exerted herself in any way, hence her need to use diapers always.

On the heavenly touch that she received in the mighty name of Jesus Christ, Patricia said: “When I felt the touch of the Holy Spirit through the prophet, I fell to the ground and I know that was the divine touch that healed me.” She then declared, “I am healed!” Patricia and her husband, Eduardo, chorused: “Thank You, Lord, for this miracle!”

Closing the proceedings, Bishop Cruz Lora thanked Prophet T.B. Joshua as well as the Emmanuel TV Team and Partners for sowing into the Dominican Republic without taking anything away or expecting anything in return.

Indeed, “Thank You, Jesus!” is a response from a happy heart and those were the words on the lips of all who attended The Dominican Republic Pastors’ Conference 2017 as they sang songs of praise in gratitude to God for all He had done.