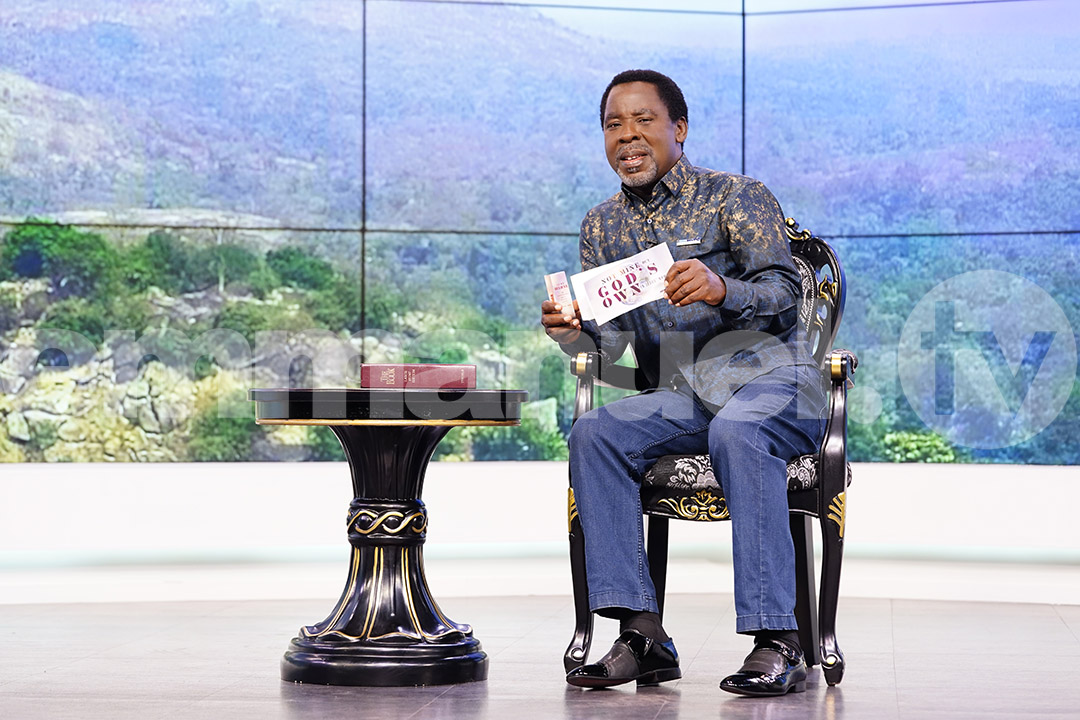 On Sunday, 24th January 2021, Emmanuel TV aired a special broadcast from Prophet T.B. Joshua concerning the New Anointing Water and Sticker. During that broadcast, God’s servant Prophet T.B. Joshua explained how the divine force in the New Anointing Water and Sticker may be activated. He started by telling viewers that it matters how they get the faith tools, which he said had been freely received from God and so were being freely given to people all over the world. “I give it to you freely,” he said, “for the salvation of your soul,” even as he advised recipients: “Give it to others freely as you have received – for the salvation of their soul.”

Prophet T.B. Joshua read from Mark 2:1-5 but he also cited Luke 16:15, Jeremiah 17:9-10, Matthew 7:1-5 and James 4:3. The man of God noted: “Jesus knows our disposition. He knows our nature. He knows our heart.” On that note, he warned people never to have any ulterior, selfish motive as far as the New Anointing Water is concerned. In his words, “Once any selfish intention or motive is involved – that is, if money changes hands in whatever way – the anointing in the water will go away, leaving only ordinary water.”

After urging viewers to leave judgment of people’s actions to God and to realise that “Jesus tests our heart to reward us,” Prophet T.B. Joshua again stressed, “Viewers, don’t be deceived. To get it to you costs nothing – no shipping or posting costs. The Anointing Water is God’s gift to us. What it costs to get to you is our own contribution.” Noting that “The level of our sacrifice will determine the level of anointing we enjoy,” the man of God declared that the greatest blessing in the Anointing Water is breakthrough in all spheres of life.

Regarding the COVID-19 vaccine, Prophet T.B Joshua advised people to not be discouraged by cases of adverse reactions caused by it. “No doubt,” he said, “there are many conspiracy theories surrounding this vaccine. However, my belief is that our governments are only trying to look for a way out of this very challenging situation, although there may be bad faith in certain quarters.”

Testimonies On The New Anointing Water

While giving his message, Prophet T.B. Joshua had mentioned that the New Anointing Water was on its way to different parts of the world, including South America, North America, Europe as well as the United Kingdom, the Russian Federation, Asia, and Africa. At many of the distribution points, God’s power manifested as people received a jolt just by touching the Anointing Water package. In many other cases, people received healing and deliverance as the water was ministered on them virtually and physically in the mighty name of Jesus Christ.

In South Africa, although Khensane had initially been led to the table where she was to pick her own package, she eventually walked back home unaided after receiving her deliverance and being healed of diabetes-induced blindness. “Thank You, Jesus! You have done it, Lord!” she testified. Also, after picking up her own package, another South African woman took off her moon boot and discarded her crutches after being healed of the foot problem that had been causing her difficulty in walking.

On her part, Caroline from South Africa received her healing from inability to walk due to neuromyelitis optica, a condition that had consigned her to a wheelchair for the last ten years. After the virtual ministration of the New Anointing Water on her, she was able to stand on her feet and walk again in Jesus’ name! “I am so happy!” she declared.

In France, medical doctor Benoit testified about his healing from a leg problem that had bothered him for the last ten years. His wife had ministered the Anointing Water on him and now he can tread boldly on the ground without feeling pain. Another France resident received his healing from arm pain after ministering the water.

Still in France, Timi testified to God’s power in the New Anointing Water. She had fallen under the power of the anointing after receiving her faith tools. “I know the end to all my problems and that of my family has come today. There is power of God in this Anointing Water,” she declared.

The story was no different for Joel, Theresa and Evelyn – all in France. Nigerian footballer Joel was healed of an injury he had sustained in 2016. He stomped heavily on the ground after a brief but vigorous jog on the pavement in front of his house. “As soon as I touched the New Anointing Water and Sticker, I felt a sensation in my body,” he recalled.

Theresa was delivered from demonic forces that had possessed her and threatened to reduce her to nothing in life. Brandishing her faith tools, she said: “As soon as I entered the room, I started feeling uneasy. As soon as I touched the table on which the New Anointing Water was, I just ‘flew off’.” She ended: “Thank You, Lord Jesus!”

Evelyn also testified alongside her husband Benjamin in France, of God’s power in the New Anointing Water. “I was always sick. If it was not my head, it would be my back or my legs – for over five years,” she recalled, praising God for freeing her from pain.

Two COVID-19 patients also received their healing through the medium of the New Anointing Water. While in a precarious condition at an ICU, Johan had the water ministered on him. Shortly afterwards, his oxygen level rose from 65% to 90%. Now healed, Johan testified tearfully, “God is alive!”

The second COVID-19 patient was Maseko, an advocate who had been in ICU and had been hanging on to life via an oxygen machine. After having the New Anointing Water ministered on him via the computer screen, however, he received vitality in his lungs and he could breathe again without an oxygen machine. Testifying about his complete healing, the South African said, “I can stand, stretch, do all things and go to the bathroom.”

Moreover, Gabil, an Azerbaijani living in Russia, had the Anointing Water ministered on him through the screen of his device. The power of God flushed out the poisonous substances that had been tormenting his life.

Mr Nzaou suffered from the problem of piles for 20 years and his wife also suffered from severe allergies. Following ministration of the New Anointing Water, the contrary spirit in Mrs Nzaou began to manifest and the name of Jesus exposed every darkness in her life, bringing an end to their past. Mr Nzaou testified that he no longer experienced the problem of piles just as his wife testified that peace had been restored in their marriage.

Finally, Patience from South Africa was healed of a severe nosebleed after the New Anointing Water was ministered on her via the phone. To the glory of God, her affliction is now a thing of the past!

The Accuser Pastor Who Found Grace

When he appeared in front of The SCOAN congregation, Pastor Gabriel cut the image of a true penitent. As a youth pastor and later a well-known preacher of the Word, he had spent much of his time in ministry condemning Prophet T.B. Joshua, whom he had joined senior ministers in describing as ‘the antichrist of our generation,’ forbidding his congregants from ever listening to any message from The SCOAN, much less visit it.

As time went on, however, Pastor Gabriel began to notice a withdrawal of God’s hand from not only his ministry but also his microfinance business, especially after marrying his wife. Afflicted on all fronts, he decided to retrace his steps to God, beginning with trying to find out if Prophet T.B. Joshua was a true servant of God. He said, “My prayer and fasting couldn’t help me anymore. I started looking for a man of God to help me.”

In disguise, then, he made his way to The SCOAN a couple of times and God’s Spirit located him and his wife, who was delivered of the python spirit that had troubled her all through the years and had heavily tormented Pastor Gabriel himself since he made the choice to marry her.

In his tearful confession, Pastor Gabriel sought God’s forgiveness even as he also requested Prophet T.B. Joshua to forgive and mentor him as he sought to return to ministry work. Pastor Gabriel recalled telling his wife, “What I said about T.B. Joshua is not true. That man is a true man of God.” He concluded: “The man of God, The Synagogue, Church Of All Nations – the place I said nobody should go – is the same place where I have finally received my deliverance!” To God be the glory! Emmanuel!