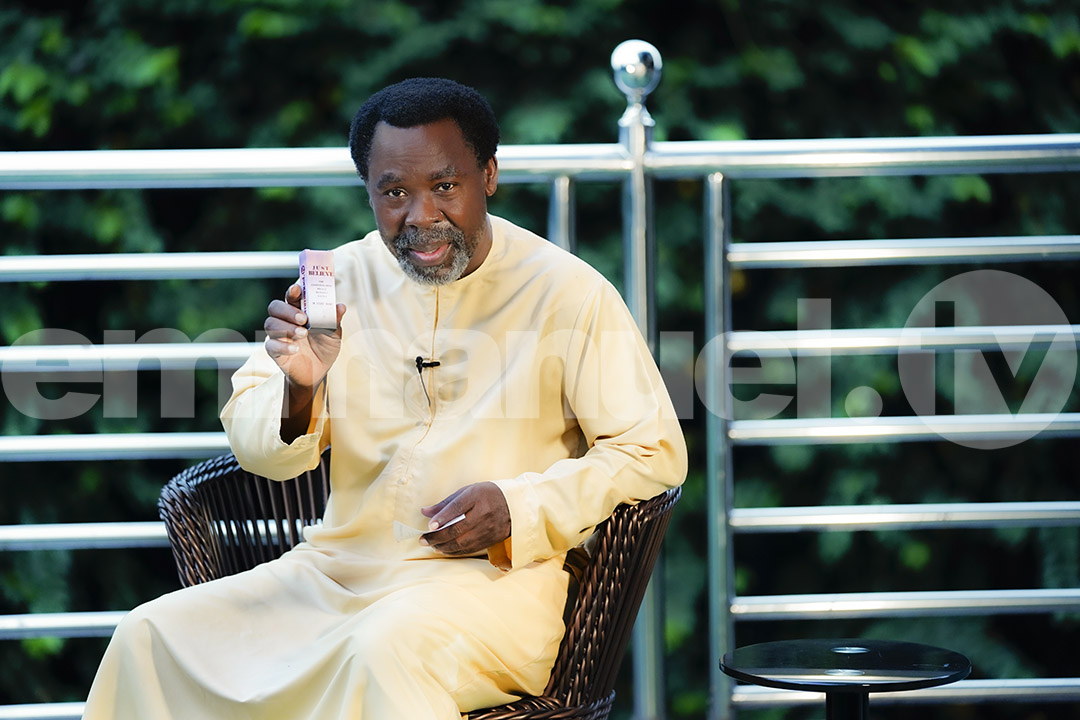 On December 31, 2020, God’s servant Prophet T.B. Joshua revealed the faith tools for the year 2021: the New Anointing Water and the New Anointing Sticker. After a long period of communing with God Almighty and seeking His face over the way forward, he had received Heaven’s mandate to demonstrate the efficacy of the faith tools on Emmanuel TV. After revealing the items via a personal message that he gave on the secluded Prayer Mountain, Prophet T.B. Joshua approved a special edition of The Emmanuel TV Distance Is Not A Barrier Interactive Prayer Sessions, during which two SCOAN evangelists ministered the water on those who had connected from all over the world. As a man of faith, Prophet T.B. Joshua had selected the two evangelists as a way of demonstrating that it is strictly the divine force in the New Anointing Water that brings deliverance, healing and salvation.

“Nature enhances spirituality,” Prophet T.B. Joshua had said as he began his short message to the world on the need for constant prayer and on the significance of the faith tools. He cited Daniel 6:10 on Daniel’s habit of praying three times daily, as well as the psalmist’s habit of praying seven times daily (Psalm 119:164) and Jesus’ disciples choice of praying on the first day of each week (Acts 20:7). He said, “This is what the Lord has led me to do for the challenges that are awaiting us in the coming year.” Speaking further, he disclosed thus: “This year is planting a seed that will be harvested next year. What this monster called COVID-19 has been destroying will be seen clearly next year.”

Given the increasing rates of poverty, divorce and other social problems, therefore, Prophet T.B. Joshua stated that “the Lord has given me the grace to make these faith tools.” He said the New Anointing Sticker, tagged ‘NOT MINE BUT GOD’S OWN’, was “for our protection and for all our belongings” and that the content of the New Anointing Water “is new every morning,” stressing that it has the power to heal every sickness, cure every affliction, solve every problem and bear every burden in Jesus Christ’s name.

Interactive Prayer Sessions: When Gideon Sought a Sign from the Lord (Judges 6:17)

For the day’s interactive prayer sessions, SCOAN evangelists were on hand to pray with people who had connected from the four corners of the earth. As the first set of people to have the New Anointing Water ministered on them via the virtual sessions, these people had firsthand experience of the self-activating power of God in a faith medium.

Among them was 58-year-old Selma from Namibia, who discarded her crutches and lumbar corset and knee braces after prayerful ministration of the Anointing Water.

Alicia from Barbados also took off her arm sling and vigorously exercised her left arm after receiving prayer for the disc bulges in her back. Now she can walk, bend and stand without feeling pain, in addition to being healed of asthma.

In South Africa, Franklin—married to Nombulelo, a South African—was cured alongside his wife and kids of COVID-19.

Similarly, 55-year-old Pamela from Uganda was excited to be rid of her lumbar spine problems and no longer needed her lumbar corset after the prayers.

Moreover, Nigerian professional footballer Elisha got his kick back after being healed of a stubborn knee injury that had affected the meniscus and ligaments in his right knee.

Other prayer recipients during the prayer session had linked up from Spain, South Africa, Mexico, South Korea, Sweden, Australia, Guadeloupe, France, and Guyana. Their problems included COVID-19, difficulty in walking, stiffness of the neck, rheumatoid arthritis and osteoporosis. To the glory of God, all of these cases were healed by the power of Jesus Christ in the New Anointing Water as people vomited the poisonous substances in their systems.

Similarly, it was relief and excitement for many all over the world as the second session began and the New Anointing Water was ministered from the Emmanuel TV Studios to people in Zimbabwe, the United Kingdom, Germany, Zambia, South Africa, the U.S., the Philippines, Lebanon, and Argentina, etc. After the prayers,

Zimbabwe’s Aletha no longer needed crutches for her knee injury, as it had vanished, just as she had been cured of her piles in the name of Jesus Christ.

Zambian professional footballer Hillary was not only healed of his knee injuries but was also delivered from the demon trying to cut short his football career with frequent injuries.

UK-based Kenneth, a pharmacist, was also healed of lumbar spondylosis and degenerative disc disease after the Anointing Water ministration; now he no longer needs a back brace. Kenneth’s case was similar to that of Germany’s Ernest, who was using a lumbar corset and knee braces owing to the problem of lumbar spondylosis.

Other cases were those of USA-based Polish national Janusz, who can now sit upright after his back pain disappeared, and the Philippine’s Janice, whose eye and back problems have now received divine attention.

Kolani’s problem of difficulty in breathing also vanished and she no longer needs her nebuliser.

South Africa’s Noxolo and Lawrence also received their healings from COVID-19 and have now recovered full use of their faculties, just like Fatimata in Lebanon, who was excited to be able to mark her birthday out of quarantine after her perfect healing in Jesus’ name.

Another South African, Monique, received her healing from wrist pain.

Elsa, from Argentina, was also healed of abnormal curvature of the spine, meaning she will no longer be needing her lumbar corset. Contrary to the doctors’ prognosis, Elsa is no longer a candidate of potential paralysis—to the glory of God!

As you may have seen on Emmanuel TV, the healings and deliverances from this special edition of The Distance Is Not A Barrier Interactive Prayer Sessions are indeed a sure sign from God that His awesome power dwells in the New Anointing Water and Sticker.