THE WAY WE MANAGE OUR POSSESSION - The Synagogue, Church Of All Nations - SCOAN - Prophet T.B. Joshua (General Overseer) Skip to content 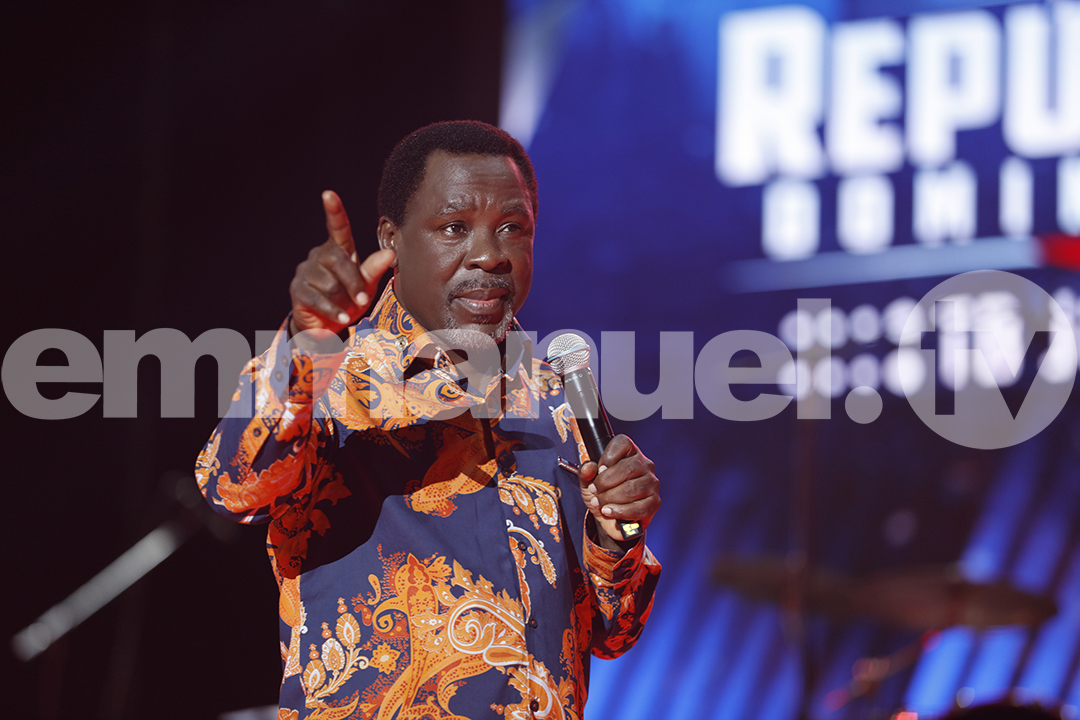 On the second and final day of the Dominican Republic Crusade With T.B. Joshua, which took place from 24-25 November 2017 at the Félix Sánchez Olympic Stadium, Santo Domingo, the island nation’s capital, thousands witnessed the power of the Holy Ghost transform lives and destinies within an instant. With their faith boosted by the divine evidence they had seen on Day 1, more people dared all odds and converged on the stadium on the final day, determined not to allow their own special blessings to pass them by. 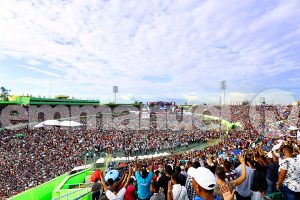 Divine transformation for a transvestite and male prostitute: That was the case of Antonio, a Paraguayan who shared his testimony at the Dominican Republic Crusade. From the age of six, Antonio had been assuming the identity of a female – wearing girls’ underwear and clothes and acting like one himself. Later, he graduated to doing drugs and sleeping with men. Besides being a transvestite, Antonio was also a stubborn unbeliever who ignored invitations to church services. However, God eventually arrested him when his sister prayed with his picture at the Paraguay Crusade With T.B. Joshua. He had scoffed at the idea of attending the crusade and insisted that he would not be joining his sister who had invited him.

While the mass prayer was going on, he suddenly felt a strong need to watch the live transmission of the Paraguay Crusade on YouTube and did so. That same night Antonio felt strange and vomited the poisonous substances in his system. Subsequently, he became a new creature in Christ! Not only did Antonio receive his deliverance from the evil spirit behind his warped behaviour, he was also financially assisted by T.B. Joshua and the Emmanuel TV Partners with the sum of $2,000 USD to support his new life in Christ Jesus. Hallelujah! 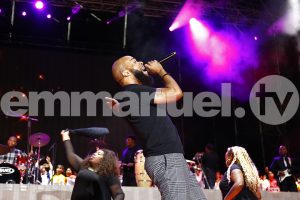 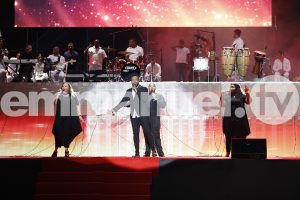 After a long  day of testimonies from Day 1 as well as praise and worship led by international gospel artistes J.J. Hairston & Youthful Praise and VaShawn Mitchell, alongside local artistes, the eager congregation excitedly welcomed God’s servant, Prophet T.B. Joshua, who fed them with soul food from the Book of Luke, chapter 16. In that passage, Jesus Christ gives a parable about a manager who is to be relieved of his position for having failed to properly manage the resources in his care. In like manner, the man of God observed, a Christian may end up mismanaging their resources if they do not follow certain divine principles. Giving his message title as “The Way We Manage Our Possession”, and subsequently also citing Mark 12 and Luke 3:7-14, Prophet T.B. Joshua emphasised the strong connection “between the way and manner we manage our possession and our salvation.” 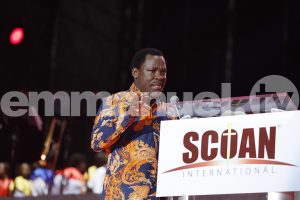 Essentially, the message encouraged Christians to lay up treasures for themselves in Heaven by paying less attention to worldly possessions while ensuring to make giving to the needy an integral part of their lifestyle. He said giving should not be done only when we have surplus and that there is great reward in giving when we have supposedly little. Citing the case of the biblical poor widow who gave her meagre all, God’s servant noted: “Someone is always there in need of us, no matter how little. Someone is always there in need of us, in need of you, no matter how little you have. If you say you are poor, you will be surprised to see someone who is poorer than you are. In life, there are always greater and lesser persons than we are – greater, lesser than we are.” 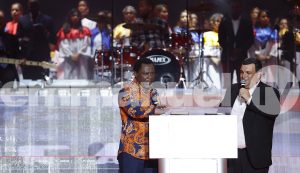 Prophet T.B. Joshua further stated that giving sincerely counts more than the worth of whatever is given, since Jesus Christ takes note of the state of our heart when we give. He said, “When you give to someone in a way that pleases God, someone is waiting to give to you too.” On how to give in a way that pleases God, he said it is by giving sacrificially, that is, when we have little. He also stated that, like prayer, giving should be done without a break. In his words, “If you know how much we need God in little things, we will know how much we need Him in big things.”

Based on this principle of sacrificial giving that is done cheerfully, the man of God urged the congregation to avoid “if onlys” and to render whatever little help is within their capacity at any point. He said that those who give excuses about having too little might end up not ever having more. He explained, “If you fail to part with little, which God has given you as a blessing, more may never come.” He then cited other bits of Scripture (e.g., Luke 19:9) in which Jesus urged people to share with their needy neighbours. He concluded: “Your help to the poor, to the refugees, to the widows, to the less privileged – see it as an assignment from God.” 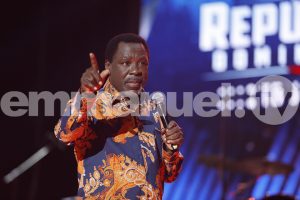 As Prophet T.B. Joshua says, the evidence of Jesus Christ is lives changed! And so, on Sunday, October 25, 2020, Emmanuel TV viewers again had their faith lifted as they watched the rebroadcast of Day 2 of the Dominican Republic Crusade With T.B. Joshua. During the healing and mass prayer sessions, many were freed from diverse illnesses and diseases and even many more were liberated from the spirit of self-hate, self-harm and suicidal thoughts due to depression and satanic nightmares. However, only a few of the testimonies can be highlighted here.

God’s time is the best for you to receive your own healing!” exclaimed Altagracia as she rounded off her testimony. Having fractured her spine, she had suffered agonising pain and could barely move around. A physical fitness enthusiast, Altagracia recalled that “it affected all areas of my life – my work, career and family.” 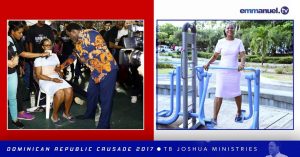 She said that despite using a lumbar corset she continued to feel debilitating pain every day. “I went to many hospitals without any solution,” she said. However, after an anointed touch by God’s servant, Altagracia returned to an active life. She happily testified, “The moment he prayed for me, I knew my problems were over. I can now move my body freely; I even used an exercise machine in my house.”

“Something went out of my body!” That was how Valentina described her own experience of God’s power during the healing session with Prophet T.B. Joshua. 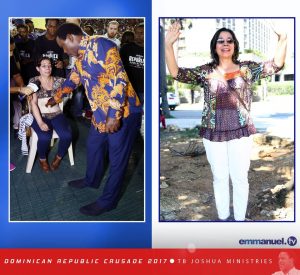 As a supervisor in her country’s Ministry of Education, Valentina’s job required a high level of vibrancy and energy, given her many daily responsibilities. However, the hernias in her discs were growing bigger and threatening to force her into premature retirement. “I couldn’t do my daily things, bend down or carry heavy things,” she said. “My job as a supervisor required me to travel long distances, which caused a lot of pain, and I had to use a special support for my back when travelling,” she added. Her powerful pain medication gave her only temporary relief. To the glory of God, however, she testified: “When Prophet T.B. Joshua prayed for me, something went out of my body! From that moment, I don’t feel any pain!” Valentina demonstrated her full recovery by exercising her body freely, without pain. She advised others thus: “Have faith and wait for God’s time; He can do the miracle.”

“I can now wear high heels!” Apparently, wearing high-heeled shoes had always been a source of delight for Julia. However, for the last five years prior to the Crusade, she had been unable to do so owing to pain from arthritis and spinal deviation that left her almost paralysed. 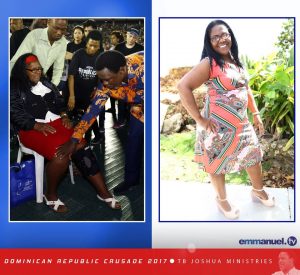 Instead of medical surgery in November 2017, she chose instead to have divine surgery with the Master Healer, Jesus Christ. She testified, “When Prophet T.B. Joshua touched me, it felt amazing. From that point forward, I started walking and running with ease; I can even wear high heels for the first time in five years!”

“A spiritual operation was taking place!” so said Amanda about her healing experience during the Crusade. She had had rheumatoid arthritis for nine long years. As her suffering increased, Amanda found herself less able to do her duties and eventually had to quit her job. 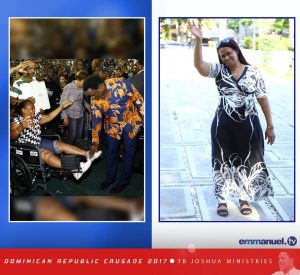 To go out, she had to use a wheelchair. Brought to the Dominican Republic Crusade by doting family members, Amanda encountered God’s awesome power. “I felt numb when the prophet prayed for me; it felt like a spiritual operation was taking place!” Immediately, strength from above fell upon her and she began to walk unaided. Since then, Amanda has moved from strength to strength as the devil’s hand of sickness has been removed from her life.

For Soraya, it was a case of total knee replacement surgery being cancelled. For 15 years she suffered pain from osteoarthritis due to knee cartilage damage and had to wear a knee brace constantly. “It got to a stage where I had to leave my work because the pain was too much,” she recounted. 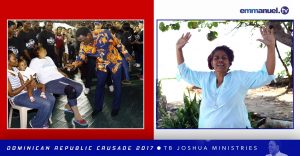 Booked for a total knee replacement, the Dominican decided to attend the Crusade with Prophet T.B. Joshua, which was scheduled for shortly before her surgery. Today, the rest is history! “When the prophet prayed for me, I felt the presence of God in an incredible way,” she recalled. In excitement, she exclaimed: “There is no more knee replacement now!”

It was freedom from scoliosis for Dominican dentist Catherine, whose daily life had been tormented by pain. “As a dentist, I could not stand for long to attend to people because of the pain,” she recalled. Despite her body brace, Catherine’s abnormally curved spine continued to be a source of bodily burden. 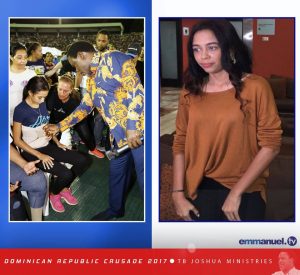 To the glory of God, however, she said, “When Prophet T.B. Joshua prayed for me, it felt like something was straightening my back.” That night, she slept very peacefully and by the following morning, all of the pain was gone! “I started to exercise myself, run and jump – things that were simply impossible for me to do before,” she testified.

“I felt fire in my ears!” Julio shouted after his healing from 13 years of loss of hearing. As a schoolboy, he had faced rejection from peers: “It was very frustrating for me because I was constantly straining to hear when talking with people.” Despite using hearing aids, his condition barely improved. 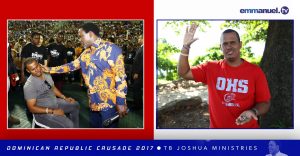 “When Prophet T.B. Joshua prayed for me, I felt fire in my ears,” the young man testified. He added: “I can now can hear normally and don’t have to shout like before!”

“I want to go to Nigeria because of T.B. Joshua!” Larissa exclaimed, unable to contain her excitement at witnessing the raw of power of God in her life. Decked in a neck collar, she had been in severe pain due to damage in her cervical area. 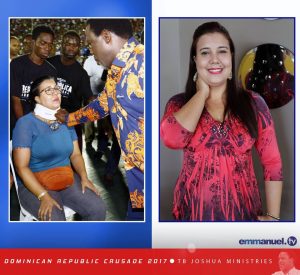 “There was no permanent solution from the doctors,” the young Dominican revealed. “During worship at the Crusade, I felt like a liquid was pouring on my neck and the pain started reducing,” she recalled. The Miracle Worker had obviously been at work! She added, “When Prophet T.B. Joshua prayed for me, I felt instant relief as the Holy Spirit’s power touched me.” Today, she remains in good health and high spirits. On the day of her healing, Larissa had expressed a wish: “I want to go and visit Nigeria just because of T.B. Joshua!” 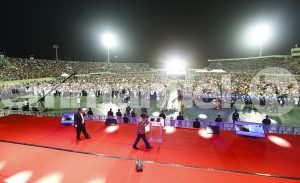 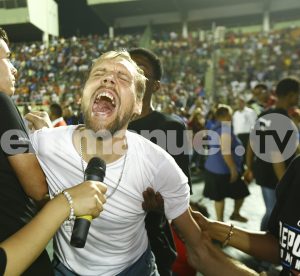 During the mass prayer, thousands were directly impacted by God’s power as they vomited blood and other poisonous substances in their system. 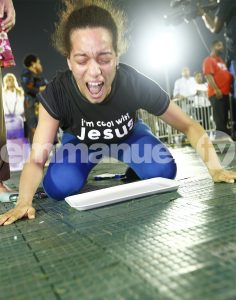 The contrary spirits in people also manifested and confessed before vanishing forever in the mighty name of Jesus Christ. 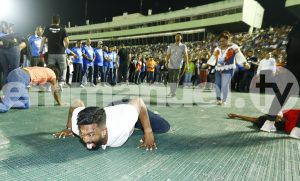 Indeed, the evidence of Jesus Christ is lives changed. Emmanuel!

A Gesture of Appreciation 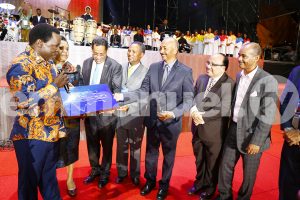