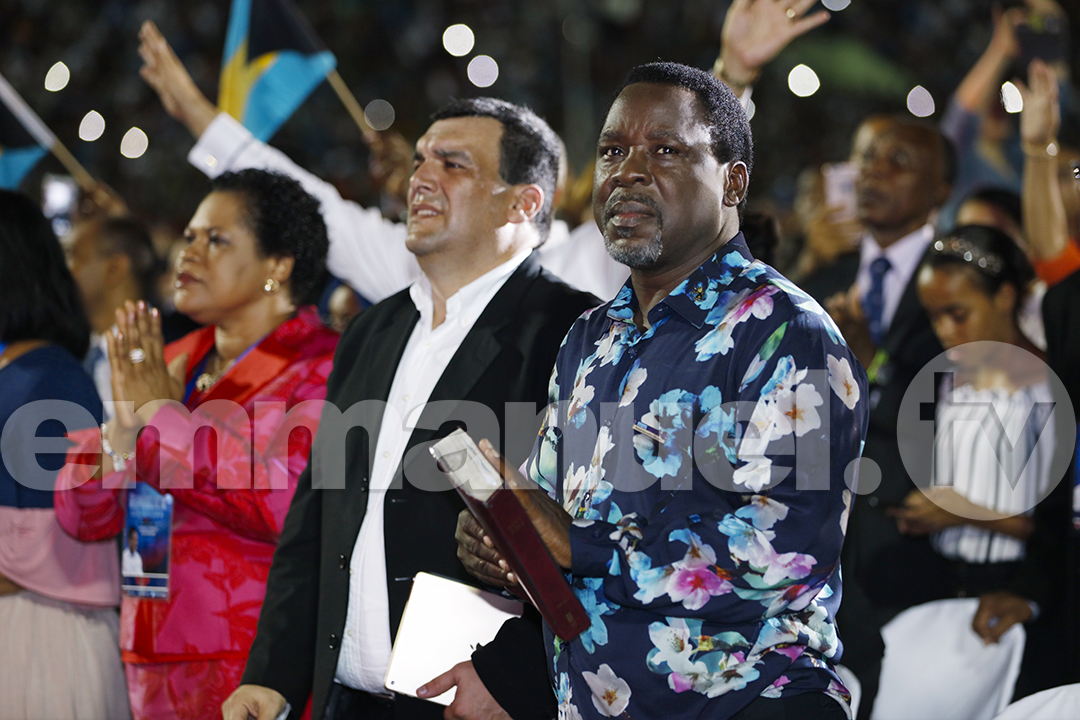 Towards the tail end of November 2017, precisely the 24th and 25th, a momentous event took place in the Caribbean nation of the Dominican Republic. At the epicentre of the epoch-making occasion was the Félix Sánchez Olympic Stadium, located in the country’s capital, Santo Domingo. That event was The SCOAN’s Dominican Republic Crusade, held under the inspiration and power of the Holy Spirit. Although held about three years ago, the profound impact of that life-changing crusade continues to reverberate across the entire Caribbean region and elsewhere.

To the glory of God, Emmanuel TV viewers had an opportunity last Sunday to watch over eight hours of faith-building footage from the crusade, since the live broadcast. Standing before a packed stadium of appreciative people who had come to witness power as of old as activated by their faith in the Word of God and the power of the Holy Ghost, God’s servant Prophet T.B. Joshua gave a simple but fundamental message on the essence of Christianity: “SEEK FIRST THE KINGDOM.” Before taking his proof text from Romans 5:1-8, the man of God reminded the people: “We are here as the Lord instructed. We are asking Him to cause us to be spiritually and mentally alert during this time of meditation and prayer.” The passage reminded Christians about justification through faith based on Jesus’ sacrificial death on the Cross.

Essentially, Prophet T.B. Joshua encouraged the people to keep their focus on the Kingdom of God, saying: “The first place we are to prosper in is in our spiritual life. Seek first the Kingdom. His Kingdom is a spiritual Kingdom, which we call salvation. Salvation is basically a spiritual rebirth.” Teaching further, he stressed the need to treat the Word of God as “an integral part of our being,” even as he added that “We are only made spiritual by living in the Word and by the Word living in us.”

Also quite fundamentally, the man of God urged the audience to amass only spiritual treasures by being committed to the welfare and well-being of others. According to him, “The reality of our salvation will be judged by our willingness, cheerful eagerness to part with our possessions for the good of others,” since “the beauty of life does not depend on your happiness only but what you can do to make others happy.” He noted that true contentment cannot come from the volume of one’s worldly possessions but from sacrificial charitable giving done in genuine service of God.

The man of God said, “To be born again is about contentment. Possessions and money alone cannot bring contentment; giving help to others can!” He also urged the audience not to sow to the flesh when he asked, “How many of us, after receiving your blessing today, will see the help of the needy, the poor, the widow, the refugee, as a priority over buying a new Jeep or building a new mansion?” He therefore advised them to sow to the Spirit in order to reap eternal life.

Prayer Line: When God Moved Mightily Among The People

God indeed moved mightily among the people during the healing and deliverance session of the crusade. As thousands were impacted by the anointing, only a few of the cases will be highlighted here as follows:

Aníbal, a Paraguayan who was born a man but lived most of his life as a woman received a mighty deliverance. His body pumped with female hormones alongside an operation to implant silicon breasts, Aníbal seemed content with his lifestyle, even legally marrying a man in Argentina. Following his deliverance in the name of Jesus Christ and the Emmanuel TV Team supported Aníbal to start a new life, sponsoring an operation he requested, to restore him to the original position in which God created him.

In the majority of the cases, people not only received their physical healing but also entered a new lease of spiritual ease in the mighty name of Jesus Christ, after vomiting the poisonous substances in their systems. Indeed, the evidence of Jesus Christ is lives changed.

During the mass prayer session, thousands were located by the anointing as the Holy Ghost overshadowed the arena. For example, the embarrassing fungal infection on Nayeli’s scalp vanished after she bled from the head during the prayers. Marisela also felt a divine touch and her severe back pain disappeared, causing her to discard her lumbar corset; similarly, Luisa and Deyanira received their healing from discal hernias and degenerated tendons respectively. For Lisete, Ashley and Carmen, it was deliverance from demonic forces causing depression, anxiety, hopelessness, nightmares and lack of focus, among others.

From Grateful Hearts: State Honours for Prophet T.B. Joshua At the close of events on Day 1 of the crusade, while giving all the praise and adoration to God Almighty for using His servant to minister healing, deliverance and salvation to their nation, members of the Dominican Republic Senate and Congress separately bestowed state honours on Prophet T.B. Joshua in recognition of his worthy contributions to humanity. Emmanuel!