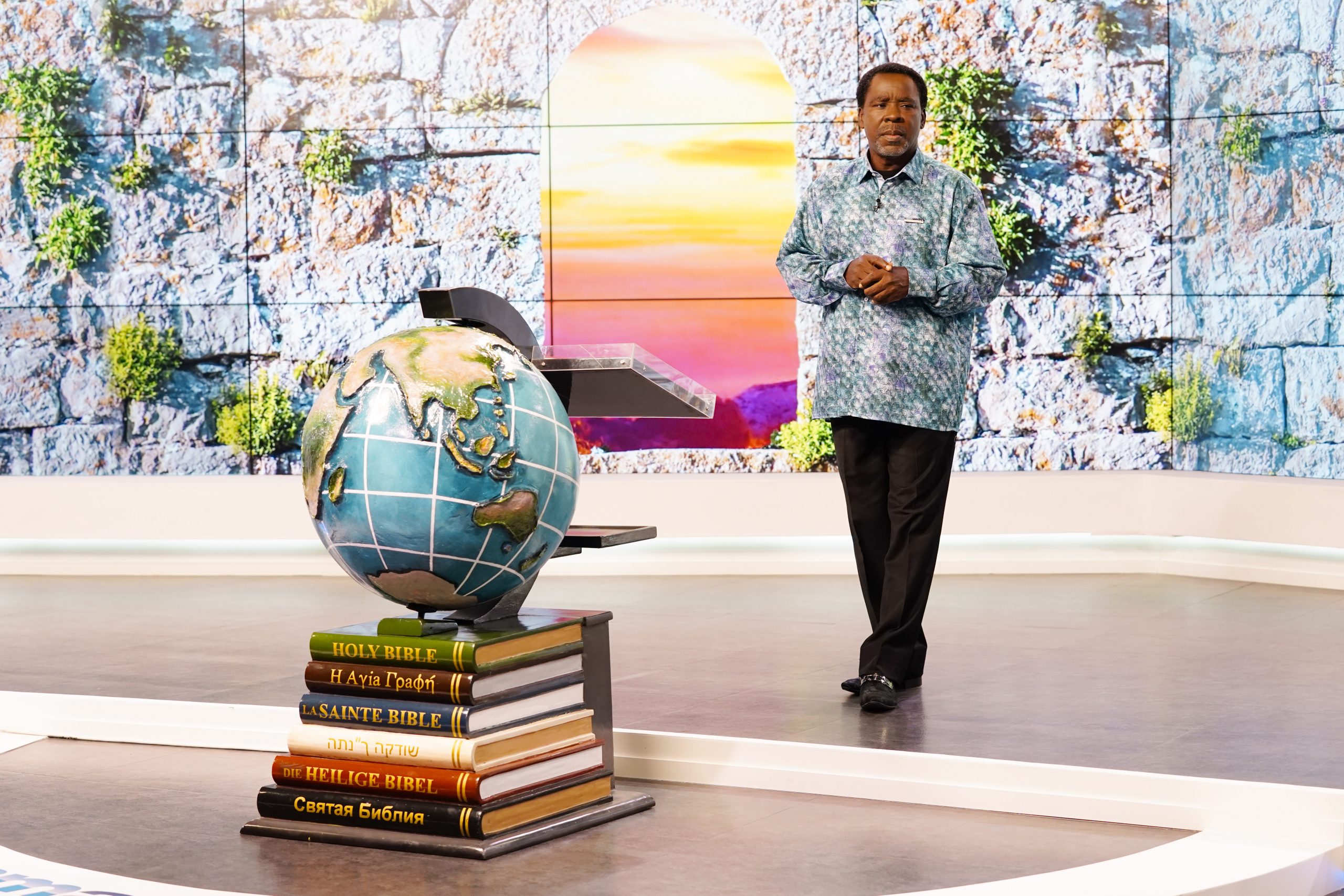 From the four corners of the earth, people of all races have continued to be impacted by God’s power through The Distance Is Not A Barrier Interactive Prayer Sessions. Not only have many received healing, deliverance and salvation in the mighty name of Jesus Christ, they have also become living proofs and shining examples of the capacity of faith and charitable works to shape human destiny in the light of God’s original plan.

On Sunday, Prophetess Angela introduced the prayer sessions with a short message on how to reach God through His Word, by His Spirit and have an extraordinary relationship with Him and with those around us. “God’s power,” she started, “cannot work in your life until your will is obedient to God’s will.” She reiterated the point that “it takes both God’s power and our genuine willingness to bring about freedom.” To back up her message, she cited John 5:1-14, Matthew 5:43-44, Luke 6:30, Matthew 18:21-22, James 1:22 and Luke 10:27. Angela noted that receiving from God can only happen when we commit to Him genuinely by letting our every action be guided by God’s Word and not living according to the dictates of a grudge-bearing, unforgiving world.

She therefore advised viewers to show true love as Jesus commanded. She said, “In Christ’s new doctrine, love has feet to move to the needy, the poor ones, the sick ones,” even as she added that “love has hands to help all without expectation.” Referring to the Beatitudes in Matthew 5, Angela explained that Jesus came to the mountainside and taught the people how to be kind, how to be forgiving and how to love. Thousands sat for days as Jesus taught them the law of God and how to have an extraordinary relationship with others. This is the extraordinary relationship that Jesus offers us today – through His Word and by His Spirit. Faithfulness to God, Angela concluded, is the only way to guarantee answers to our prayers, “for what we give or what we do is not as important as the manner and way in which we do it.”

It was indeed an intense series of sessions on Sunday as the Holy Spirit broke down all barriers of distance to locate people with healing, deliverance and salvation across the continents. Whether they were cases of COVID-19 or chronic conditions that had kept people bound in pain, the anointing shot through screens, knocking people down into states of brokenness and causing them to vomit the poisonous substances in their systems.

She also prayed for others suffering from afflictions such as: ulcerative colitis, hypertension, internal haemorrhoids, joint pain, addiction to eating ice cubes, lumbar spondylosis, osteoarthritis, asthma and pulmonary fibrosis, among others.

At the end of the session, the prayer recipients testified about their healing. Alexandra from Venezuela said she no longer had the desire to eat ice cubes, just as Trevor, a professional footballer from the Netherlands,

juggled a football for several minutes after being healed of a broken leg. Similarly, Stephanie in France no longer suffered from arthritis, while Papua New Guinea police detective Sim demonstrated his complete healing from an ankle sprain and whistling in the ears.

From South Africa and Botswana to Ghana and Spain, people vomited the root causes of asthma, spondylosis and other long-term ailments as they parted ways with medical devices such as lumbar corsets and knee braces.

In the second session, Prophet Racine prayed for people in Namibia, Zambia, Zimbabwe, India, Cameroon, the Philippines, Ghana and many more.

While Dr. Mulopw from Zambia, Rohit from India and Zimbabwe Member of Parliament Senator Dube were among those who received prayers for COVID-19,

others received prayers for a number of ailments, such as pre-hypertension, diabetes, herniated discs, sleep apnea, asthma and fracture. Once the prayers started, Elizabeth, who had pre-hypertension, thrashed on the floor before vomiting the poison in her system. Senator Dube danced in

gratitude to God as she shook off all her COVID-19 symptoms, while Latcha discarded his crutches after being healed of the double fracture in his right leg. Rogelio from the Philippines glorified God’s name for his healing from congenital asthma.

Indeed, the joy of US-based Cuban ophthalmologist Orlando knew no bounds as he claimed his victory over diabetes, sleep apnea and herniated discs in Jesus’ name.

Prophetess Anne also prayed for a large number of cases from all over the world. Jone in South Korea received prayer for difficulty in walking due to back pain caused by compression of his nerves. At the end of the session, he discarded his lumbar corset and back stretcher. On his part, Australia-based DRC national Charles received his healing from general fatigue,

restlessness, frequent urination and severe sleep apnea that had required him to depend on a breathing machine. Charlene in South Africa had been suffering from tonsillitis for three weeks but after falling under the anointing, she rose up and swallowed solid food again.

Also after the prayers, Phineas from South Africa received his healing from hypertension and disc problems; now, he no longer needs his lumbar corset. In the USA,

Malla could not hide her excitement as she was healed of numbness in her arm. Anne also prayed for COVID-19 cases such as Dr Ilunga in Swaziland, Ehis, Faith and Cletus in France, as well as Potso, Mthembu and Nomthimbu in South Africa.

Another interesting case was Argentinian rugby player Malena who was healed of a shoulder fracture and breathing problems while her fiancé, who had been filming her as she received prayers, also fell under the anointing and vomited the impurities in his system.

At the end of the fourth session, Ohashi, a Japanese, man shed tears of joy as he sat beside his little son. Ohashi had suffered a tendon tear in his left forearm while operating a machine at work.

The arm was kept in a brace. He said his son had asthma and short-sightedness. Ohashi became emotional at the instant healing he had just received in the name of Jesus Christ. It was also good news for Gloria, who after her healing, removed her lumbar corset and neck collar.

In Papua New Guinea, medical doctor Jonah equally received his healing from prolapsed discs which had caused difficulty in walking.

In Argentina, Daniella and her son Jeremias also sought prayers over chronic pulmonary asthma. No longer will mother and son be needing their nebuliser. Although initially off-camera, Daniella’s younger son Benjamin later came into view to testify of his healing from foot pain.

There were also testimonies from other prayer recipients in that session from Peru, Germany, and Argentina. Those who presented their COVID-19 cases before God included Frans from South Africa, Masoba from Botswana, as well as Gerald, Violet and Gloria from Zimbabwe.

In the fifth session, Prophetess Yinka prayed for COVID-19 cases from South Africa: Lilian, a Zimbabwean living in South Africa; Christiva and Deon; Esther, who was also hypertensive, and Thokozile.

During her testimony, Lilian was all smiles as she did things she had been unable to do earlier; her sister who had been handling the camera also disclosed that she was knocked on the floor by the anointing and that every ailment in her body had vanished. Prophetess Yinka also prayed for other cases, including difficulty in walking and evil attacks.

In particular, an aged, bedridden Peruvian woman, Carmen, was so energised by the force of the Holy Spirit that she could sit up on her bed and vomit the poison in her system. To God’s glory, she no longer needs the oxygen tank and breathing machine with which she had been managing her twelve years of autoimmune hepatitis, gastritis, sleep apnea, pneumonia, pulmonary fibrosis and heart failure, among other debilitating conditions.

Celestine, a Cameroonian, was equally joyful for his healing from six months of asthma and eight years of waist pain, while Charles removed his neck collar after the healing and to his amazement, passed out all the sickness in his system in the form of blood. On his part, Vladislav, a Russian prayer recipient narrated how he had felt an evil spirit depart from his body during the prayers. Gertrude in South Africa exercised her legs and arms excitedly after being healed of spinal tumour; to the glory of God, she no longer needs her crutches and lumbar corset, having vomited the poison in her system. It was also an exciting time in God’s presence for Emmanuel, who had torn the ligaments in his left knee while playing football.

While thanking God, the American resident drove a bicycle around the neighborhood. Also healed was Korpo, a Liberian woman living in the USA who was using a lumbar corset because of protruded discs. Among others who received a touch from Heaven was Gabriella, a young Nigerian living in the Netherlands who had asthma and allergies; she also had to use a wheelchair anytime she needed to move beyond a few metres. By the sheer grace of God Almighty, Gabriella will no longer be needing her wheelchair and adrenaline shots.

Exhortation on Giving: Love as the Greatest Virtue

In his message on giving in a manner that attracts God’s attention, Prophet Racine began thus: “Whether we plant or water, we are a team.” Continuing, he said,

“Faith brings man to God and love brings him to man,” given that our ability to love is what truly makes us human. Speaking further, Racine explained that faith works alongside other spiritual forces to bring about God’s purpose in human life (1 Corinthians 13:13), since faith (genuine righteousness) and love (acts of charity) must always go together. Noting that ministry starts with love for God, which then flows outwards to people, Racine stated that “what comes from the ministry goes to the ministry of giving to the widows, the orphans and the physically challenged.” Therefore, he encouraged viewers to share their blessings with those in need. “Let us join our hands together and help our fellow men, for the wound of one is the wound of all,” he said. To reinforce this point, Racine explained that true Christians must accept their every circumstance as a test or reward and that we must believe first before we see, not see first before we believe.