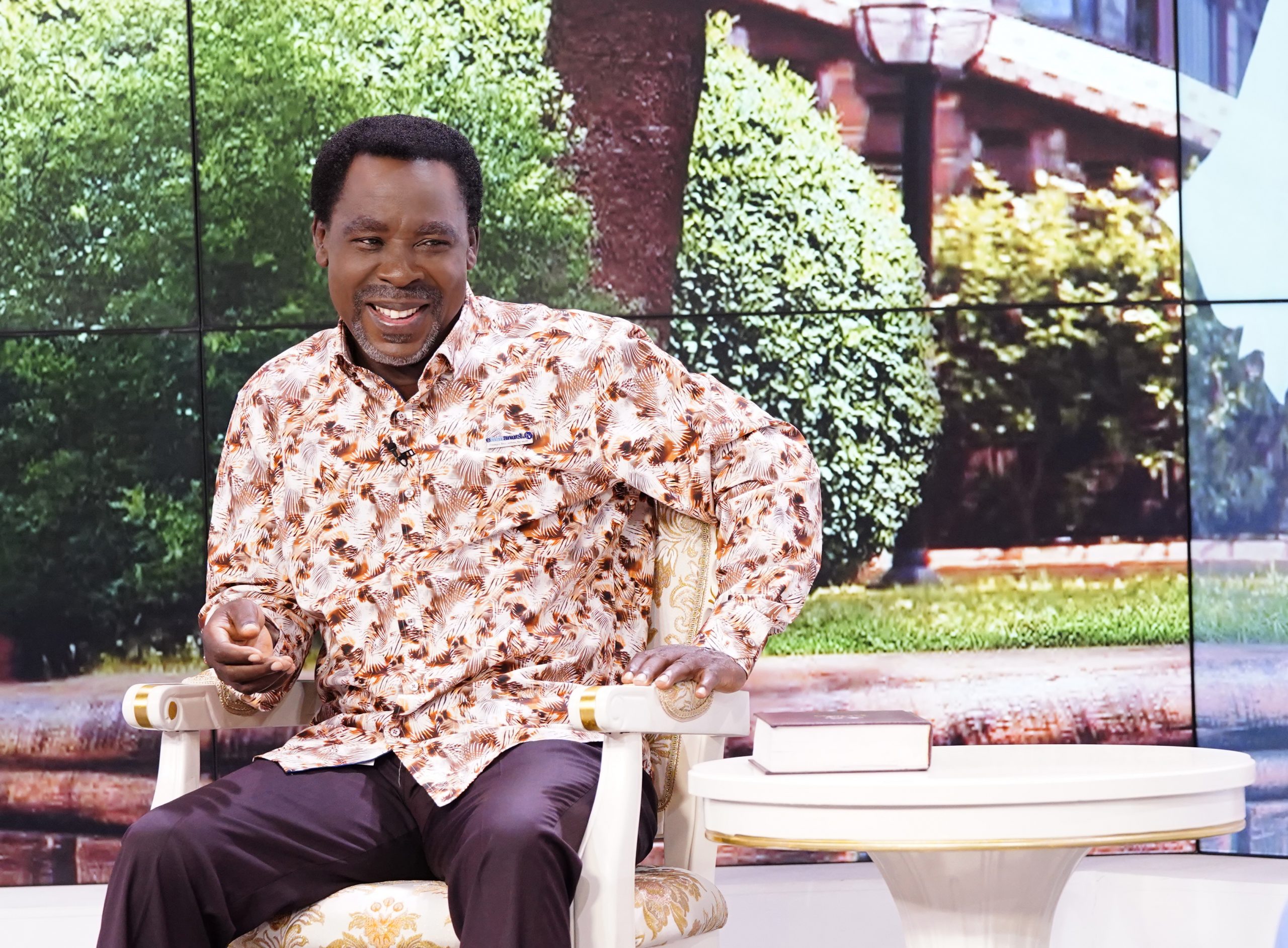 On Sunday, 13 September 2020, it was exactly six years and one day since The SCOAN Martyrs Of Faith went to be with the Creator of Heaven and Earth. As has been the tradition since that event, Prophet T.B. Joshua took time out to glorify the name of the Lord and to offer words of encouragement to not only the families of the Martyrs but also to all who have chosen to worship God Almighty in spirit and in truth. “Whether you die young or old,” he said, “no matter the nature of death, death is sure to come. What matters is the grace to continue living hereafter.” He therefore advised viewers to live each day as if it were their last by doing God’s will while giving to others and supporting them to find their purpose in life.

For his introductory message to the Distance Is Not A Barrier Interactive Prayer Sessions, Prophet Racine read from Mark 9:14-24, the passage in which Jesus Christ raised the issue of faith with the father of the demon-possessed boy – assuring him in verse 23 that “All things are possible to him who believes.” Racine explained that “Man can only have and exercise what he believes he has.” He went further, stating: “Faith makes us operate in the dimension in which God operates.” Racine observed that it is only when we log into that dimension that we will see that distance is not a barrier for God, adding that He is more powerful and majestic at distance.

Racine pointed out that prayer is taking hold of God by faith in preparation for claiming Jesus Christ’s promise of liberation from all forms of physical and spiritual affliction. “Faith,” Racine said, “launches us into the realm of the impossible because faith demands the impossible,” given that it is the connection between man and God’s Spirit.

Racine therefore reiterated the need for viewers to realise that God’s power cannot be limited by physical distance (Matthew 8:8). Elaborating on this, he said: “As it was yesterday, it is still the same today! If what was possible to the Centurion seems impossible to you, you need to find out what is restricting you. The only barrier between God’s promises and us is the level of our belief. That is why in similar encounters with those Jesus healed and delivered, he asked them probing questions: “Do you want to get well? What do you want me to do for you?” In coming to Jesus, you first have to acknowledge your need. If your action is genuine, the Holy Spirit will affect it.”

He then concluded: “As a genuine seeker, you are not called upon to look within yourself to see how much faith you have. You are called to look to God and take from Him the faith you need – the faith He’s prepared to give you right now.”

In faith, they received their healing from COVID-19

God’s limitless power was again on display as the ministers of God prayed for COVID-19 patients from all over the world. During each session, as anchored separately by Yinka, Anne, Angela, Racine and Chris, the prayer recipients experienced God’s powerful presence right inside their homes. Each minister started by offering prayers of forgiveness for the sick and ended by offering prophetic prayers for viewers.

Kristophine (Namibia), Philiswa (South Africa) and Cynthia (Peru) all testified to feeling better after the Holy Ghost impacted them during prayers by Prophet Racine. Glorifying God for their healing, they took turns to demonstrate how they could now do things they had been unable to do earlier.

As Prophetess Angela ministered, the Holy Ghost overshadowed Innocent in Zimbabwe as well as Nobhule, Christopher and Senyarelo in South Africa. Standing on the authority of the name of Jesus Christ, Angela commanded all traces of COVID-19 to be flushed out of their systems. After the prayers, they confirmed that they had recovered their senses of taste and smell, with other symptoms also having disappeared.

Prophetess Anne prayed for Mbatani and Lindokuhle in South Africa as well as Lilian and her two daughters in Canada. During the prayers, the power of the Holy Spirit fell upon Lilian’s son, who had been off-camera as he beamed his family to the world. The little boy fell to the ground and started vomiting the poisonous substances in his system. His mother later disclosed that he had been feverish. Indeed, the Spirit of God knows all things! To God’s glory, all the prayer recipients also received their healing after expelling the impurities in their systems.

God also performed wonders in the lives of Carol, Lesedi, Alain and Boitumelo in South Africa as well as Adiyr and Ainura in Uzbekistan and Muyaya in Swaziland. As Prophet Chris commanded their release from COVID-19 and other ailments, the Holy Spirit got rid of all poison in their systems. “You are healed for the salvation of your soul,” Chris reminded them.

Prophetess Yinka prayed for Nombuso, Londiwe, Thulani, William and Tshegofatso in South Africa as well as Regina in Canada. After the prayer, among the symptoms that had vanished were loss of the senses of taste and smell, coughing, headaches, loss of appetite, tiredness and general body pain. As God’s power surged through them, the people fell to the floor and vomited all traces of the virus in their bodies. In particular, Nombuso’s body shook uncontrollably as she received her healing and deliverance in the mighty name of Jesus Christ.

As Prophet Racine prayed for the people, including Donat from France, who had to use a crutch owing to a ruptured meniscus, the roots of sickness, disease and affliction in their lives were destroyed and they joyfully demonstrated their new-found freedom by exercising their bodies and doing the things they were unable to do before, to the glory of God, including Donat who, miraculously, was able to walk unaided!

Whatever the names of their diseases and spiritual problems – be it spinal problems, sleep apnea or a breathing problem, as was the case with Luis from Argentina, who was dependent on an oxygen tank – the prayer recipients all sensed the healing touch of God as every atom of sickness in their systems were flushed out as Prophetess Angela prayed for them, in the mighty name of Jesus Christ! Indeed, to God’s power, nothing is impossible as Luis discontinued the use of the oxygen tank after the prayer!

God Almighty rained His healing power upon those who had connected to the Interactive Prayer Sessions as Prophetess Anne prayed, in Jesus’ name. Amongst them was Josia from South Africa whose mobility was greatly hindered due to severe waist and shoulder pain and had to use a crutch, lumbar corset and an arm sling as supports. After the prayer, God’s mighty touch upon the lives of the people was so evident as they all glorified His name for their freedom from sickness, disease and affliction, and all supports were discarded, to the glory of God!

God proved Himself to be more majestic and powerful at distance as those who had connected to the Interactive Prayer Sessions from different continents all sang a new song after God’s mercy and favour located them through the prayers of Prophet Chris. One of them was Sam from the United States, who had battled the deadly sleep apnea for years and had to depend on the use of a CPAP machine. However, all this has become a thing of the past for Sam. Indeed, wherever you may be, Jesus Christ is reachable!

From sickness to good health, from sorrow to joy, from captivity to freedom! Such was the case of the prayer recipients after Prophetess Yinka prayed for them, in the mighty name of Jesus Christ. With sicknesses ranging from liver problems, cervical and lumbar spondylosis, asthma, the people, including Luis from Venezuela, who had a kidney, colon and prostate problem, all connected believing God for His healing touch and they all received their freedom! Walking aids such as crutches and lumbar corsets were all discarded after the prayer as the people glorified the name of the Lord for their healing.

Prophet Racine, in his address to partners all over the world, threw more light on the topic of tithes and offerings, and the church’s position on the matter. He stressed that though it is scriptural to give offerings and pay tithes as stated in Malachi 3:10, they must come from those led by the Holy Spirit. According to him: “Since we are not reminded to pray, it is the Holy Spirit that opens our hearts to pray. We don’t know how to pray. In the same vein, we don’t know how to pay tithes and offerings; it is the Holy Spirit that leads us. All acts of faith – praying, singing, dancing, worshipping, offering, tithing and fasting – are but acts of self-surrender to God.” Crucially, Racine said that all acts of faith “must come spontaneously from a willing heart, a willing spirit.” He made reference to Romans 14:5: “Let everyone be convinced in his own mind.”

Continuing his address, he stated, “Those who are led by the Spirit of the Father do things with all their hearts and are blessed of God.” In particular, he said that it is their conscience that prompts them to give.

Racine further stressed that giving only as led by God remains the guaranteed way for both the giver and the receiver to enjoy divine rewards for their actions. He said, “Without direction from the Spirit of God, if we give, we give of ourselves.” Therefore, he advised, “With all our heart, let us give what is pure, just and admirable,” for “the more we help, especially to further the Kingdom of God, the more God expands our coast.” Encouraging genuine partners to press on in changing lives, changing nations and changing the world, Racine ended thus: “Those who humble themselves under God have taken the best course to secure themselves.”