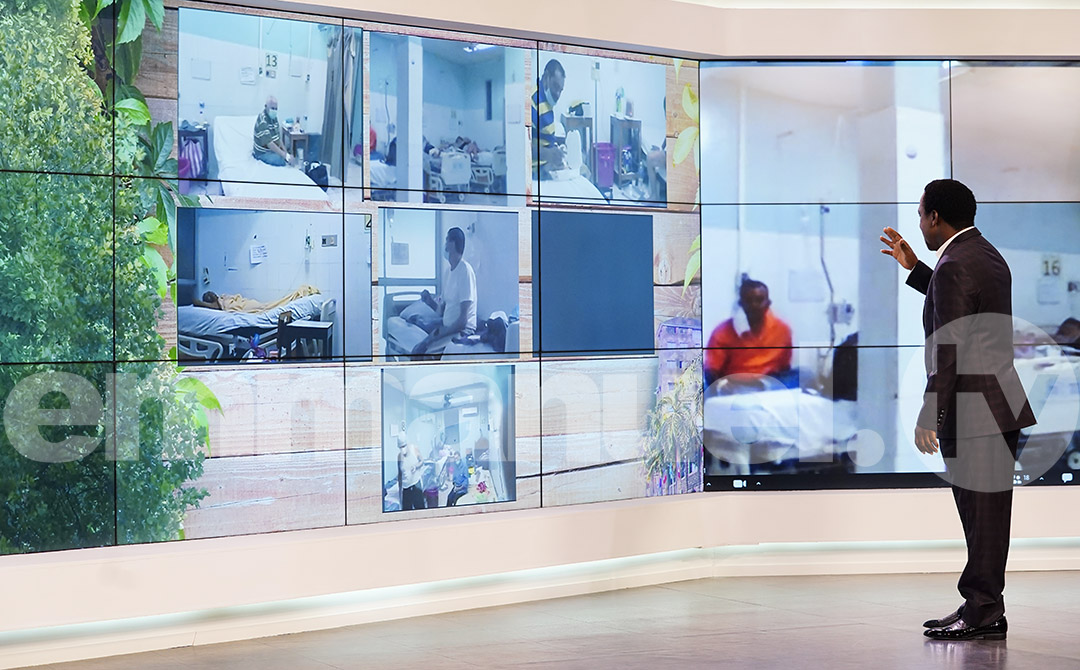 Some weeks ago, The Emmanuel TV Distance Is Not A Barrier Interactive Prayer Sessions took a special dimension. On that day God’s servant, Prophet T.B. Joshua, under the inspiration and guidance of the Holy Spirit, had prayed solely for COVID-19 patients at an isolation centre in the Central America nation of Honduras. That event, which was a demonstration of implicit faith in God’s unfailing power, provided yet another proof of God’s omnipresence, omniscience and omnipotence. In their various ways the patients had reacted visibly to God’s healing and deliverance power. Some vomited, some shook while some simply sensed God in ineffable ways. Whatever their reaction was, what mattered was that they had ultimately encountered God’s solution and salvation.

Now we present to you their testimonies of ease and relief as they were being discharged from a regional hospital in Honduras.

From the Horse’s Mouth: A Harvest of Testimonies

A face mask shielding his mouth and nose, in observance of COVID-19 protocol, Hermelindo began his testimony thus: “By the grace of God, today I have been discharged from hospital.” He then noted that the prayers of Prophet T.B. Joshua, in Jesus’ name, had been key to his and others’ healing and full recovery. Citing the Bible’s charge that people should believe in God and His prophets and thereby be prosperous (2 Chronicles 20:20), he described himself as “a living proof that God still works miracles and uses His servants as channels of blessing.” He, therefore, thanked Prophet T.B. Joshua and the Emmanuel TV Team while adding that the prayers gave him a new opportunity to live. “I had been in isolation with terrible symptoms,” he recalled, even as he thanked Jesus Christ for sacrificing His life on the Cross for humankind’s salvation.

Asked how he was feeling after being discharged, Francisco’s face lit up at once: “I am happy! God has been so good to me!” His arms raised in worship, he also said that he had had nothing but joy in his heart “since the prophet prayed for me.” Also vanished with his COVID-19 symptoms was the foot pain and numbness that had been troubling him. His arms still raised in praise of the Almighty, Francisco remembered: “When the prophet prayed for me, I sensed fire all over my foot and I was healed. The fire I sensed was the power of God.” He promised to keep watching Emmanuel TV and advised people to believe sincerely in God at all times. “I am going home in peace to continue my life,” he concluded.

Unable to hold back his emotions, Zacarías kept adjusting his face mask as he wiped his tears during his brief but intense testimony. “Today I have been discharged from hospital and I am going back home very happy,” he stated, thanking God for handing him a new lease of life. In a quivering voice, he said: “Thank You, Lord Jesus, for renewing my strength with Your power.”

Another testifier was Miguel, who, after announcing his excitement at being discharged to go home, glorified God for using Prophet T.B. Joshua to minister healing to the sick at the isolation centre. “I am very happy to be going back home,” he repeated.

On his part, Antonio began by thanking God Almighty for giving him victory in the form of a miracle. He also thanked Prophet T.B. Joshua and the medical, as well as administrative staff of the isolation centre. “Everything has been wonderful and I appreciate God Almighty,” he said. He equally thanked his daughter for supporting him throughout the period.

Suyapa was one of those who had vomited poisonous substances during the prayer session. Seated in a car on the day she was discharged, Suyapa looked pointedly at the camera lens and said: “I am so grateful to God for giving me another opportunity to live.” She further said she was delighted about going home to meet her children and grandchildren as well as the rest of her family. “Thank You, Jesus, for what You have done in my life,” she waved. For The SCOAN she prayed, “May God continue to bless your ministry so you will be able to continue saving souls for the Kingdom of God.” Supaya’s husband, Carlos, was on hand to escort her home. He thanked God that his wife was going home “healed in mind, body and soul.” He reminded viewers that humans are nothing without God Almighty.

With the warmest bear hug was 46-year-old Dunia greeted by a female relative as she walked out of the isolation unit on her way to a waiting car. “I am so happy to be going back home, for the glory and honour of God!” Describing Jesus as the Master Healer, she said she was returning home healthy and happy. She advised those afflicted with COVID-19: “You should seek God’s intervention and surrender all to Him. Jesus Christ is the Great Physician. Jesus can breathe life into you; give your life to Him and don’t be rebellious. Only Christ is our salvation.”

With palms facing outwards and raised to head level, Ángel said with a burst of energy: “Thank You, Jesus! I am healed from every sickness. Thank you, Prophet T.B. Joshua, for the prayer. I am filled with joy and strength. I am completely healed! God is with us, helping us.”

Like Ángel, Fatima had nothing else but an offering of praise to give the Creator of Heaven and earth. She said: “I was positive for COVID-19 but after the prayer of Prophet T.B. Joshua, I have been healed. I had difficulty in breathing but after the prayer I am able to breathe well again. Thank You, Jesus, for giving me a second chance!” She advised people to hold on to God and watch Emmanuel TV.

Another testifier, Silbil, also said she was happy to be going back home after being discharged. “Thank You, Lord! Thank you, Prophet T.B. Joshua, for the prayer.”

In the passenger seat of a small truck sat Eugenio as he testified of how the Lord lifted him from the bed of sickness. He declared, “All the glory and honour to Him! God is powerful! He is the only One we should seek.”

On his part, Kelvin gave his testimony right in his home. “I am so glad that now I am with my loved ones,” he said.

Alongside the testifiers, caregivers at the isolation centre also spoke of how God worked wonders in the lives of the patients. Ariel joyfully testified of the discharge of COVID-19 patients from the regional hospital after the prayers and that their full recovery had been amazing to the medical staff. He said: “We are grateful for the prayer session that took place here. Thank you, Prophet T.B. Joshua, for remembering Honduras!”

A nurse who described the patients as “like our family”, recalled how one of the patients had been shaking and vomiting during the prayers and got discharged the following day, likewise another patient who no longer needed her oxygen device after the prayer. “That,” she said, “is the evidence of the prayer through the power of the Holy Spirit.” She added, “God is Love and that is why all this has come to pass.”

Another nurse said, “Thank You, Prophet T.B. Joshua. We pray God will continue to bless you and that your mission will continue to grow.” Yet another nurse said she had seen evidence of the patients’ healing when they got up and either vomited or went to the toilet. “I witnessed the miracles take place during the prayer,” she added. One other nurse said that her father had in fact been one of the patients. “I saw him before the prayer but after the prayer he was so well!” she said. An assistant nurse also testified of the miracles she witnessed and was proud of her organisation. “I am filled with joy that God has sent His servant to this place to help us,” she ended. Truly, to God’s power, nothing is impossible.