SUCCESS STARTS FROM THE HEART - The Synagogue, Church Of All Nations - SCOAN - Prophet T.B. Joshua (General Overseer) Skip to content 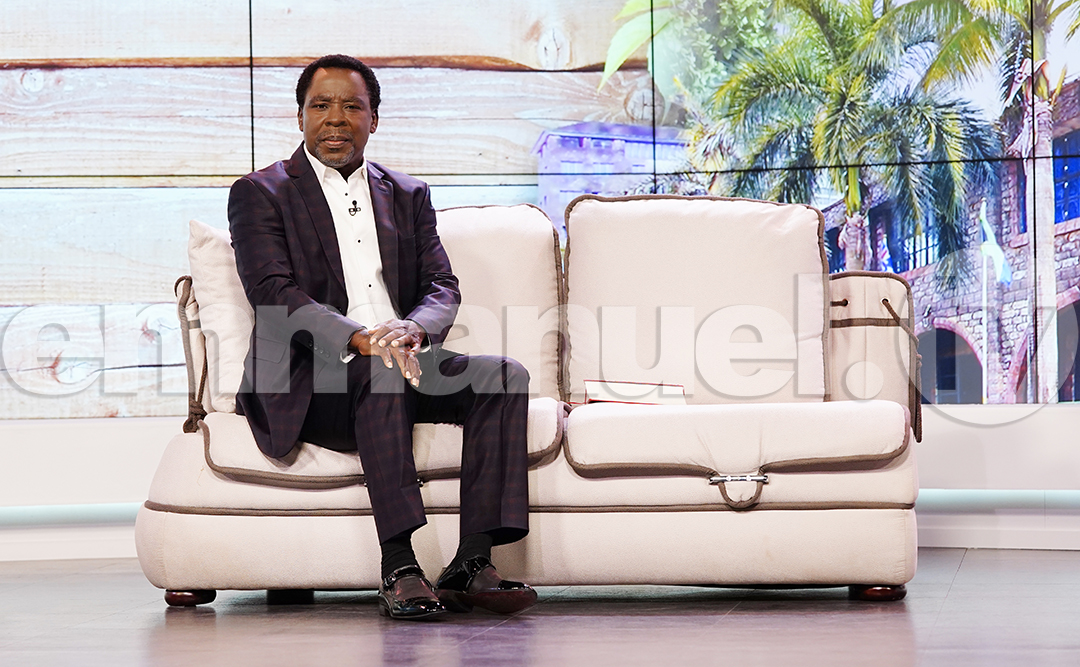 Prophet T.B. Joshua’s encouragement to viewers that distance is not a barrier to receive was clearly demonstrated as people from diverse countries received God’s healing touch during the Distance Is Not A Barrier Interactive Prayer Sessions.

Prophetess Yinka began by describing the Interactive Prayer Sessions as evidence of the transformative power of Jesus Christ that changes people’s lot from sickness to health, weakness to strength, captivity to freedom, faithlessness to faithfulness and from poverty to prosperity, among others. After encouraging viewers to prepare their minds for impartation by the Holy Spirit, she took her proof text from Genesis 1, reading from verses 1-3 and 26 – the verse about the making of humankind in God’s own image – and continued with her message titled, “Success Starts From The Heart”.

The woman of God explained that it is necessary to keep the heart active, alert and free so that it can easily contact God’s Spirit, which values love, forgiveness, patience, humility and obedience, among other virtues. She also stated that “Where the world and its inhabitants find themselves today is as a result of lack of genuine love and a genuine heart.” Given that “God measures our lives by our love for Him and for our fellow brother” (1 Corinthians 13:13), she further pricked viewers’ conscience: “If we do not love our brother whom we have seen, then how can we love God whom we cannot see?” Prophetess Yinka therefore urged Christians to always exercise faith in God who is omniscient, omnipresent and omnipotent.

The Power That Knows No Barriers

The interactive prayer sessions were another opportunity for many all over the world to directly experience the healing, deliverance and saving power in the mighty name of Jesus Christ. The ministers of God prayed not only for COVID-19 cases but also for other forms of affliction in people’s lives, such as destiny-thwarting spiritual attacks and debilitating physical conditions that cause social and economic stagnation. Be it COVID-19 or other issues, people reacted instantly and in different ways to the overshadowing of the Holy Spirit as He went to work on their cases.

While many vomited and felt heat all over their body, others appeared dazed during the prayers, eventually realising that their chronic symptoms had vanished. As they gave their instant testimonies in Spanish, English, French, Portuguese, Indonesian, Russian and other languages, the joy on their faces was clearly evident. Quite importantly, the ministers of God not only offered prayers of forgiveness with the prayer recipients but also advised them to maintain their salvation in Christ Jesus.

Among the COVID-19 symptoms that disappeared after the prayer session were sore or dry throat, blocked nose, headaches, chest pain, back pain, stomach pain, cold, fever, shortness of breath, loss of sleep, loss of smell and taste, excessive sweating, weakness of the body, pain in the spine, joint pain and cough.

In the first session, Prophetess Yinka prayed for Zimasa and his wife, Nontando, in South Africa, as well as for Joyce in Zimbabwe, and Bertrand and his family in South Africa. Zimasa said about how he had felt during the prayers, “I could feel the power of Jesus inside me and the COVID-19 symptoms disappearing.” Bertrand affirmed after sipping from a bottle of fruit juice to confirm recovery of his sense of taste: “When the Son of God sets you free you are free indeed.”

At the end of the second session, which was led by Prophet Racine, Hana in Indonesia confidently tapped her chest in the hospital bed and asserted: “There is no more coronavirus in my body because I have been healed by Jesus!” The other prayer recipients in the session were Noleen and Lucas in South Africa and kindergarten teacher Luiza in French Guiana.

In the third session, a Salvadorian family living in the USA also encountered God’s power over their COVID-19 symptoms. The family members were Santos (father), Mirtila (mother), Bryan and Javier (sons) and Glenda (daughter). The other people in the session were healthcare worker Benedicte in Swaziland, Cecil and his wife, Boitumelo, in South Africa, as well as Olasunkanmi, a young Nigerian living in Poland. All the people reacted powerfully to the prayers offered by Prophetess Angela in the mighty name of Jesus Christ.

Prophetess Anne led the fourth session, during which she prayed for Adriana and her husband, Jaime, both being Colombians living in Spain; Maggie and her husband, Eric, as well as their daughter, Jessica, in South Africa; Eddy with his wife and daughter in the USA; and Wilhemine and her nephew, Vilho, in Namibia. All of them had specific things to say about what happened to them during the prayers. For example, Jessica said her stomach no longer felt bloated and Maggie swung her arm around her body to prove the disappearance of one her own COVID-19 symptoms.

In the fifth session Prophet Chris prayed for Alexis in Chile, as well as for his wife, Marjorie, and their three children. He also prayed for Rethabile in South Africa, Jacqualine with her family (daughter Kelsey and husband Papega) in Botsawana and Thsimangadzo with her baby in South Africa. Alongside their COVID-19 symptoms they also received healing for other issues such as asthma, hypertension, prostate ill-health, menstrual cramps and uterine dysfunction, etc.

God’s hand also fell upon the people during the prayer sessions for general cases. The cases involved people from far-flung parts of the world such as Hong Kong, Zambia, the USA, China, Kazakhstan, Ghana, New Zealand, Suriname, France, Indonesia, Jamaica, Ukraine, Chile, Angola, and Nicaragua, among numerous other countries.

In Hong Kong, Pastor Lam asked for healing from heart, lung and brain problems while his wife sought healing from chronic constipation due to a dormant cancer. Gertrude from Zambia had an ankle fracture and multiple gallstones that had made her life miserable while Willy in the USA complained of spine pain due to a disc protrusion. In Kenya, Betty sought healing from osteoarthritis of the knees while Kandeh, a Sierra Leonean man in China, prayed to be healed of pelvic stiffness. There was also Hidat, an Eritrean living in the USA who had had asthma for 20 years, as well as Sergey, a Kazakhstani living in South Korea who had been bedridden owing to a broken hip bone. After prayers with Prophetess Yinka, the people testified about their healing one after the other. Emmanuel!

Prophet Racine prayed for the Kazakhstani family of Farida and Algerin over the problems of depression, nightmares and addiction to smoking. He also prayed for Mohammed in Ghana who was using a lumbar corset because of spondylosis; Josephine in New Zealand who had a heart problem for 29 years; Andres, a Cuban living in Suriname who had been addicted to drugs for three years; Marie in France who had osteoarthritis and sciatica since 2014; Hot in Indonesia who was suicidal because he had a lung condition causing severe difficulty in breathing; Layanda in Jamaica who had thyroid issues; Pally in India who had sinusitis, throat and back problems as well as the spirit of lust; and Nataliya in Ukraine who had muscular dystrophy.

Prophet Chris prayed for individuals and families in Chile, Hong Kong, Mexico, Angola, South Africa, Italy, and Nicaragua. Herma, a Colombian, had scoliosis, hypertension and severe hip pain, while her husband, Gabriel, had diabetes and body pain. Reymundo in Mexico was addicted to alcohol and had stomach, back and knee pain, while Hongkonger Wan Tim had severe constipation. Irene, an Ivorian based in Italy, had lumbar spondylosis while university lecturer Augusto in Angola was embarrassed by his severe stuttering.

There was also young Kgopotso in South Africa, who could not walk without a brace and crutches, as well as fellow South African Douglas with his wife and daughter, who had issues such as pneumonia, bronchitis, diabetes and hypertension. In Nicaragua, Martha reported problems with her kidneys and heart.

Conrrado in Mexico – severe pneumonia due to contracted lungs

Carmen in Mexico – haemorrhoids causing back pain and headaches

Evelyn, a Dominican in the Netherlands – spinal problem of 10 years

Fanny and Miguel in Mexico – 13 years of barrenness, as well as evil attacks headaches, numbness on right side and dizziness (wife – Fany), severe groin pain and sciatica (Miguel)

Manuel – lumbago and sciatica of 13 years, and haemorrhoids of over 20 years

Ema and Oscar, Estonians in the UK – barrenness, sinusitis and marital problems.

To the glory of God, all cases received divine attention in the mighty name of Jesus Christ.

A Message on Love and Partnership

In agreement with Prophetess Yinka’s assertion during her sermon, Prophet Racine started his partnership message by declaring: “We are living in a troubled world because we have failed to apply the fundamental solution: love.” Therefore, as part of efforts to make the world a better place for all, Racine advised viewers to be one another’s keeper by providing relief, ease or succour to those in need – even giving beyond our natural capacity. Loving people, he said, are never indifferent to the plight of others and always activate their spiritual eyes to see whosoever is in need.

Thus, Racine added: “We should learn to listen to our conscience; we should learn to listen to our heart. When we do our life will change. Our philosophy, our thinking, our ideas, our focus will change immediately.” Further, he cited Matthew 6:33 and noted, “When you care for the less privileged, you are caring for God.” Urging viewers to make themselves honourable vessels in God’s vineyard and beyond – not necessarily in terms of money only – Racine concluded: “A time to give is a time to pay a visit to the elderly, the widows, the widowers, the orphans, the less privileged in society and the physically challenged, even if they do not share the same faith as you.”