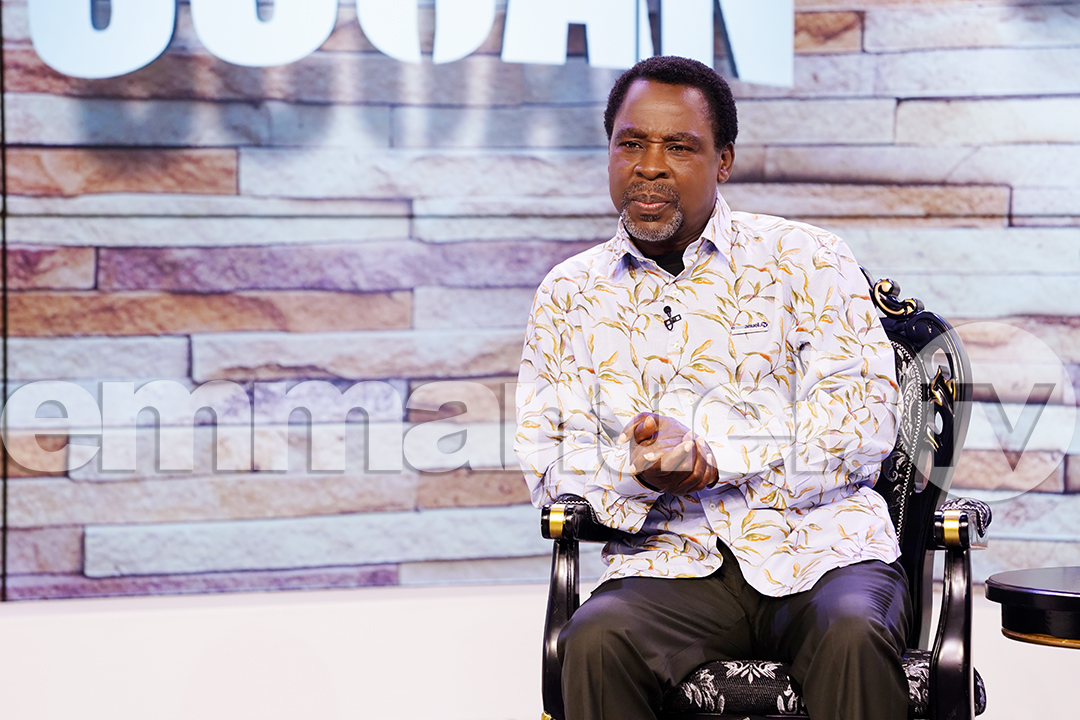 A few days ago, the ban on physical religious services was lifted as part of the staged easing of the COVID-19 lockdown. Prophet T.B. Joshua had however announced that the church was waiting to hear from God on when physical services would resume. He therefore advised people to keep watching Emmanuel TV.

Prophetess Anne’s sermon focused on the heart’s crucial role in prayer, being the contact point with God’s Spirit. She noted that some Christians fail to receive answers to their persistent prayers because they have allowed their heart to become a “realm of feelings and emotions occupied by the lures and cares of this world.” Anne’s message was titled “Self-Effort – A Wrong Attitude”, with the proof text taken from Psalm 66:18 (NKJV) – “If I regard iniquity in my heart, the Lord will not hear.”

Interpreting the bit of Scripture, Anne stated: “Sin not only destroys the success of our prayers but also ruins the spiritual privilege we have of God’s grace.” She then cited Romans 9:1 and 2 Corinthians 12:9 while stressing the need to secretly and openly “live right with God” and depend on the power of the Holy Spirit to help us avoid being “tormented by the desire to return to our bad habits.” Describing faith as “a vacuum that draws the anointing from Jesus Christ,” Anne advised viewers to prepare their hearts for a divine encounter during the interactive prayer sessions.

From all over the world, people connected to the Emmanuel TV Studios in Lagos, Nigeria, believing that distance is not a barrier to the move of the Holy Spirit. The minsters of God prayed for people with a diverse range of health challenges and life situations, including COVID-19, asthma, sleep apnea, cervical spondylosis and various forms of addiction. Below are highlights of their experiences as God’s power fell on them thousands of kilometres from the prayer location in Lagos, Nigeria.

Prophetess Anne began the prayer sessions with COVID-19 patients. From South Africa Dorothy, seated beside her husband Kennedy, called in over her painful symptoms. Also from South Africa were Dimakatso and her family, as well as Zandile, Temba, Kara and Joaner. Dimakatso also had hypertension and pulmonary embolism. From Colombia, Leidy complained about her dry cough, sore throat, headaches and other symptoms. Leidy’s husband, Milton, also requested prayers for his excruciating back pain. From Malawi, Maxwell also connected, just as Shamiso and Nelson from Zimbabwe.Once the prayers started, Zandile hit the floor and started vomiting the poison in her system. Leidy, Shamiso and Dimakatso – like Zandile – also coughed up substances. “Be free, in the name of Jesus Christ!” Anne commanded.

Thanking Jesus, all the prayer recipients confessed their new-found relief. “I can bend now,” Joaner said, even as she reported that her husband vomited while she was receiving prayers. “The sore throat is gone. I can smell,” Shamiso said, sniffing a bottle of apple cider vinegar. “I don’t feel any pain; I feel light,” Zandile declared. For the viewers, Anne prayed: “We command every affliction, we command every sickness to be flushed out by the fire of the Holy Ghost!” The session ended with a dance offering to the Lord by Leidy and Milton.

In the second session, Prophet Chris prayed for another set of COVID-19 patients. They were Enverin and Ilda from Albania, Stain from Malawi, Bikash from the USA, Anna and daughter from South Africa, as well as Stephanie, Josephine and Joyce from Nigeria. Others were Phindile and son as well as Monzanique and family from South Africa. “In the mighty name of Jesus Christ – be forgiven!” Prophet Chris prayed.

He thereafter prayed for the people’s release from affliction and bondage. Reactions to the prayers ranged from coughing and vomiting to shaking. “In the name of Jesus Christ, be released from that virus!” Prophet Chris further prayed. At the end of the session, the people reported that they were no longer experiencing symptoms such as cold, coughing, high temperatures, general body weakness, loss of sense of smell, shortness of breath, headaches, dizziness, sore throat and itchy nose, etc. Chris then asked them to confirm their healing. While some tasted fruit and sniffed at substances, others took deep breaths and exercised their bodies – to the glory of God.

Prophetess Yinka prayed for the next set of COVID-19 patients: Stephens, Emma, Tumelo, Peter, Busisiwe and Eric from South Africa, as well as Waleska from Honduras and Francis from Malawi. The woman of God told the prayer recipients about the need to let their hearts connect with God, urging them to let go of pain of the past. She began: “In the name of Jesus Christ, be forgiven!” Asking the people to vomit the poison in their system, Yinka added: “You sickness, you disease – I command you out of this body!”

Peter said of the effect of the prayer on his system, “Your word was like lightning in my body,” even as he displayed what he had vomited. Emma said she felt as if there was fire in her system while Stephens said he had regained his sense of smell. Others demonstrated their healing by tasting fruit or meat.

Finally, Yinka prayed: “Viewers all over the world, regardless of what your situation is in the natural, the way out for you has come, in the name of Jesus Christ!”

Prophetess Angela prayed for the Williams couple as well as Sinnah, Justinne, José and Lindelwa from South Africa. Also prayed for were Franciscar and family from Kenya, Malory from Colombia and Enrique with his family from Mexico. After the prayer of forgiveness, Angela prayed for release for all the COVID-19 patients in the mighty name of Jesus Christ. Instantly, many fell under the power of the anointing and vomited the poison in their system.

After the prayers, Sinnah took off her knee brace, which she had been using to support herself; on her loss of the sense of taste, Sinnah crunched on a fruit to also prove her healing from COVID-19. On his part, Enrique walked into the kitchen and prepared himself a snack of ham, cheese, bread and chili. Justinne and José also proved they had recovered their sense of smell and taste. “I know Jesus has set me free,” Malory said, having vomited during the prayer. The Williams couple equally reported feeling relief. For viewers, Angela prayed: “Be released from captivity, in Jesus’ name!”

Those healed of COVID-19 in South Africa also included the following: Marine, together with her daughter and granddaughter; Deborah, who connected from her hospital bed; Welcome and his mother, Felicia; and Alain.

God’s rain of healing also fell on George from Malawi, as well as Hugo and Raquel from Mexico. Hugo’s lungs had been battered by the virus and he needed a nebuliser and an oxygen tank to breathe. His wife, Raquel, also had to be isolated at home with him, as all the hospital spaces had been taken up.

Despite her own pain, Raquel cried, “I want God to raise my husband from this bed.” As he came into view, Prophet Racine assured the people, “God is more majestic in distance” even as he asked them to make heart contact with God. Once the prayers started, the people began reacting by coughing, vomiting and shaking under the anointing. As he brought the prayers to a close, Racine declared: “By the mercy of God, I can see you being healed!” He then asked them to confirm and claim their healing in Jesus’ name. Hugo, who had lain in bed earlier, was now on his feet. He said, “During the prayer, the strength entered me and I was able to stand up! Now I am healed to worship God again.” Raquel cried tears of joy as she reported her healing, a polythene bag holding her vomit on the floor. “Ah, it’s too much!” Alain exclaimed when he perfumed his wrist and sniffed at it. Welcome and Felicia also announced their freedom, just like George from Malawi. For the viewers, Racine prayed: “Be released from that sickness, in the name of Jesus Christ!”

The ministers of God also prayed for people suffering from different ailments and conditions. Prophet Chris prayed for a case of cervical spondylosis involving a Botswana-based Congolese medical doctor who also had kidney stones and diabetes. As well, Chris prayed for David in Australia who had numbness of the body, kidney problems and sleep apnea; Turkey-based Damilare, a Nigerian who had diabetes and piles; South Africans Nelly and her daughters who were addicted to eating soil, as well as her son who was addicted to marijuana; Yzidor from Canada who had severe back pain; and Eric from Dominican Republic who was under the bondage of nightmares and lust. To the glory of God, all of these mountains were levelled in Jesus’ name.

Prophetess Yinka prayed for Bupe from Zambia who had lumbago sciatica; Joselyn from Chile who had hypothyroidism; Yanmi and her family from India who had psoriasis, hormonal imbalance, coughing and wheezing; Guy from France who had broken his knee during karate training; Victor and his family from Algeria who had breathing and other problems while also under a family curse; Keila and her family from the USA who had poor vision and bone problems; Bibiana from Peru who had cancer and HPV; and Mamenne from Liberia who had difficulty in walking due to a herniated disc. At the end of the prayer session, there were clear signs that the people had come into a new lease of life, as those using walking and other aids as well as drugs parted with them forever.

Some of the other prayer sessions as handled by Anne, Angela and Racine are as follows:

South Africa – Eddy, who had asthma and was using a nebuliser, an oral spray and an inhaler; his wife Sarah, who had backache and calcaneal spurs, high blood pressure, heart palpitations and pounding headaches.

USA – Olga, who had spinal curvature and also suffered from cold spells.

France – Marie Jacqueline, who had scoliosis and felt like she had a weight on her shoulders and feet.

Norway – Yoni, who had multiple tumours.

Ecuador – Pastor Patricio, who had gastritis and spine pain, as well as depression, stress and anguish.

Nigeria – Kate, who had a stiff neck and relied on different neck collars. She also had high blood pressure, in addition to being addicted to pornography.

Chile – Laura, who had depression, family problems and skin issues.

USA – Roseline, who had spine pain and used lumbar corsets.

Paraguay – Elisa, who had asthma, sinusitis and anxiety.

Zimbabwe – Emely, who suffered pain from a slipped disc. Her children had asthma and knee pain.

Peru – Gonzalo, who felt strange movements in his body and experienced fear and anxiety.

South Africa – Suzelle, who was addicted to eating soil.

Argentina – Antonio, who had severe waist and wrist pain from a discal hernia.

Germany – Patricia, who had difficulty in walking due to arthritis.

Colombia – Gloria, who had a lung problem for 20 years, as well as severe headaches that made her body shake.

South Africa – Yve, a Congolese who was using double crutches and other aids as well as painkillers for his spinal cord problem.

Chile – Hector, who was suffering from panic attacks and feared being in enclosed or crowded places.

Costa Rica – Maria, who had asthma for 30 years, as well as her daughter, Melissa, who also had asthma, and her granddaughter, who had scoliosis.

Nigeria – Karen, who linked up over her asthmatic 10-year-old daughter, Mfoniso. Karen herself fell under the anointing as the prayers began.

As the ministers prayed in the mighty name of Jesus Christ, God’s power flushed out all the problems in the peoples’ lives one after the other. Indeed, God is more powerful and majestic in distance. Emmanuel!