DISTANCE IS NOT A BARRIER - The Synagogue, Church Of All Nations - SCOAN - Prophet T.B. Joshua (General Overseer) Skip to content 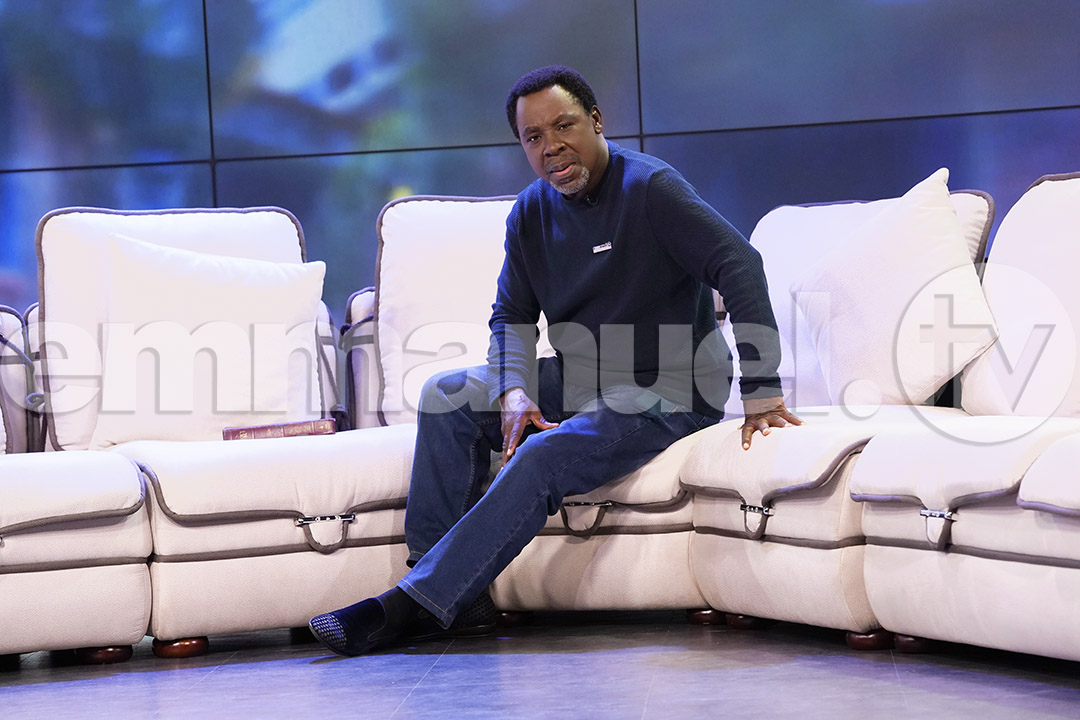 “God Knows All Men,” so sang the Emmanuel TV Choir in a fast-tempo energetic gospel funk. The song’s lyrics, composed by Prophet T.B. Joshua, reminds believers that “You can’t deceive God by the waving of your hands” or by “your fasting and your prayer” or other forms of outward show as true Christianity lies in the heart.

Another song performed during the virtual Sunday Broadcast of June 21, 2020 was the iconic “Spirit Pray Through Me”.

The service was a demonstration of God’s wonderfulness through distance. As recorded in the New Testament, there were a number of instances in which Jesus Christ showed that distance is not a barrier to the power of the Word to bring about healing to the sick, deliverance to the captive and salvation to the condemned.

For instance, in Matthew 8:5-17, the centurion demonstrated great faith when he told Jesus that all that was needed was Jesus’ pronouncement of healing on the centurion’s sick servant in Capernaum, and he was healed instantly despite being at home. In Matthew 15:21-28, the Syrophenician woman was persistent in calling for Jesus’ help over the life of her demon-possessed daughter. And as Jesus spoke the Word, deliverance was transmitted to a troubled soul that was far away. In John 4:46-54, when the nobleman met Jesus in Cana of Galilee, he displayed faith in Jesus’ capacity to heal his son who was back home in Capernaum.

Indeed, as it was in Jesus’ time, so is it today, for Christ did not say there would be no more healing, deliverance or salvation after His return to Heaven. As a reflection of this unqualified belief in the potency of the Holy Ghost, which activates the Word, The SCOAN, through the Emmanuel TV platform, initiated the Distance Is Not A Barrier – Interactive Prayer Sessions as a virtual medium for connecting with God’s children. And so, the ministers took turns to pray for Emmanuel TV viewers from across the world.

Ysmael Figueredo, a Paraguayan, had linked up from South America. As he interfaced with the Emmanuel TV Studios, he told Prophetess Angela about the challenges with his health. He said that in the last one year, he had been having severe difficulty with sitting down owing to muscle problems, piles and bloating. Before she prayed with Ysmael, Angela urged him to examine the state of his heart so that he could connect with the heavenly frequency. “We want you to know that distance is not a barrier to the move of God,” she told him. And as she stretched forth her hand towards the screen, God’s awesome power flowed through Ysmael. After the prayers, Ysmael shed tears of joy as he declared that he no longer needed the special cushions that he had been using to support his back while sitting. “Thank You, Jesus. I am free!” he exclaimed.

Angela also prayed for Dr Teodoro Bopa, from Equatorial Guinea. A specialist in Cardiology, Teodoro’s body had been battered by hypertension, diabetes, fatty liver disease, chronic gastritis, erectile dysfunction and vascular ectasia for the last 10 years. He was also facing marital issues with his wife. After receiving prayers covering every aspect of his problems, Teodoro claimed his healing in the mighty name of Jesus Christ. His wife also received prayers and the couple glorified God for restoring joy to their union.

Right there in their South African home, the Toona family received prayers in the mighty name of Jesus Christ. Mrs Toona had been confirmed to have COVID-19. She had an itchy throat and a dry cough as well as chest pains and a nagging headache. In no time, her husband also came down with the same symptoms. As Prophetess Yinka offered prayers of healing for the family, all of them, including the children, began to vomit poisonous substances as God’s healing hand fell upon them. Mrs Toona instantly testified, “I feel like my lungs have just opened up…I can breathe freely now!” Elated, the family glorified God as Prophetess Yinka declared the household free of every deadly virus.

Susana Díaz, from Costa Rica, also received prayers for her hip pain and arm lump. She had been unable to walk for long distances or engage in any form of physical exercise. In fact, anytime she raised her leg, her bones would make cracking sounds. Additionally, the pain in her arm always deprived her of sleep. After prayers from Prophetess Yinka, Susana received her perfect healing and she burst into a song of gratitude.

From Mexico, Adrián Gómez and his wife Mariana laid bare their problems. Both were suffering from an infection in their private parts that caused fatigue, weakness and rashes all over their body. They were also having issues in their marriage and were thinking of divorce. As Prophetess Anne prepared to pray for the couple, she asked them to make peace with God by letting go of all forms of grudges. After the prayer session, Mr Gómez said that he felt heat from his head to his toes and a burning sensation in his stomach. When asked if he still felt itching, Mr Gómez replied, “No, not anymore.” After feeling the power of God move, the couple claimed their healing and declared their marriage restored, in the mighty name of Jesus Christ.

Belgium-based Amon Evans had lived the last eight years of his life handicapped. Brandishing his official disability badge issued by the government, Amon explained that he had severe difficulty in walking owing to spinal compression and arthritis of the left knee. To ease his mobility, doctors gave him a knee brace; however, the brace did little to change his mobility status. In faith, Amon connected with the Distance Is Not A Barrier – Interactive Prayer Sessions and received prayers in Jesus’ name, which brought about instant relief. Upon checking himself, it was clear that the burden of his severe condition had been lifted and he could now move freely. To God be the glory!

For Sharon from Zambia, life while growing up was barely fun. As an asthma sufferer, she was always at risk of having an asthma attack, so she had to avoid many things that other children enjoyed. Many times she had to stay away from school, a situation that badly affected her academic performance. Because her breathing could fail at any time, Sharon always carried an inhaler. After narrating her issues to Prophet Chris, Sharon experienced the incredible when God’s power coursed through her body as she fell to the floor and began to writhe around. Along the line, the evil spirit behind the sickness in her life spoke out and was then cast out forever. When she got back to her feet, she confirmed that she could now breathe freely, after the family curse of asthma had been broken once and for all by Jesus Christ.

Prophet Chris also prayed for Inga, a Russian woman who had been experiencing pain owing to a lump in her throat. Inga could not drink cold water or eat ice cream without feeling terrible discomfort. Since 2009, she had developed allergies after her second caesarean section. To the doctors, Inga’s problem was incurable, so they advised her to take hormonal injections in order to prevent her throat from being blocked altogether. However, Chris informed Inga, “There is never a disease Jesus cannot cure,” just before praying for her. After the prayer session, Inga proved her healing by taking a cup of cold water and eating some bread. Crying tears of joy, she told the world: “I don’t feel the pain anymore. I feel very fine.” The evidence of Jesus Christ is lives changed.

Also from South America, Rebeca Cruz, a Bolivian, connected with the heavenly frequency as Prophet Racine prayed for her in the mighty name of Jesus Christ. Brandishing an X-ray of her right knee, Rebeca said that her knee problem had affected her back and that for the last two years she had been unable to walk normally. She could not dare to walk for up to ten minutes without feeling excruciating pain. She also had problems with her eyesight. As Prophet Racine was about to offer supplication on her behalf, he encouraged her not to hold offence in her heart. After the prayers, Rebeca confirmed her healing by flexing her knee joints.

Prophet Racine raised his voice in intercession over the case of Marie Amalaman, from Ivory Coast, who had been using a lumbar corset since suffering a herniated disc after childbirth in 2014. Doctors had told Marie that surgery could not guarantee her freedom from the pain in her spinal cord. As such, Marie could barely function at home or work. Before praying for her, Racine assured Marie: “Madam, to God nothing is impossible. God is more powerful at a distance but it all depends on the state of your heart.” He then called upon the name of Jesus Christ to flush out the pain in Marie’s body. In jubilance, Marie exercised her body energetically to demonstrate the perfect healing she had received immediately after the prayers.

In continuation of the virtual prayer session, the prophets and prophetesses individually prayed for the viewers and reminded them that the prayers were not time-bound.

Next up, Prophetess Angela, as an announcer, announced, “You are no longer in a position of sickness. Have your joy and walk!” after imploring viewers to consider the state of their heart before praying. She continued with a string of prayers commanding every spirit of addiction, depression and loneliness to be broken, in Jesus’ name.

During the prayer offered by Prophetess Yinka, she noted: “We all need to acknowledge the fact that we are empty vessels that need to be filled. If you do or say this with all your heart, the job is half done already. Jesus Christ is willing to fill you with His healing, with His deliverance, in Jesus’ name.”

Finally, as a messenger of Christ, Prophetess Anne proclaimed the message of good news that God Almighty can reach the unreachable places because time, space, distance, even elements of the sea and the air can be used as mediums for God’s power to reach whom He wills. She emphasised the importance of our hearts being prepared as she began to command out every demonic activity working through people’s minds, bodies and spirits, in Jesus’ name.

Accordingly, we encourage you to tap into the anointing that is available as you follow the Distance Is Not A Barrier – Interactive Prayer Sessions on Emmanuel TV. Indeed, better is not good enough, for the best is yet to come!