WHAT ARE YOU DOING IN SECRET? - The Synagogue, Church Of All Nations - SCOAN - Prophet T.B. Joshua (General Overseer) Skip to content 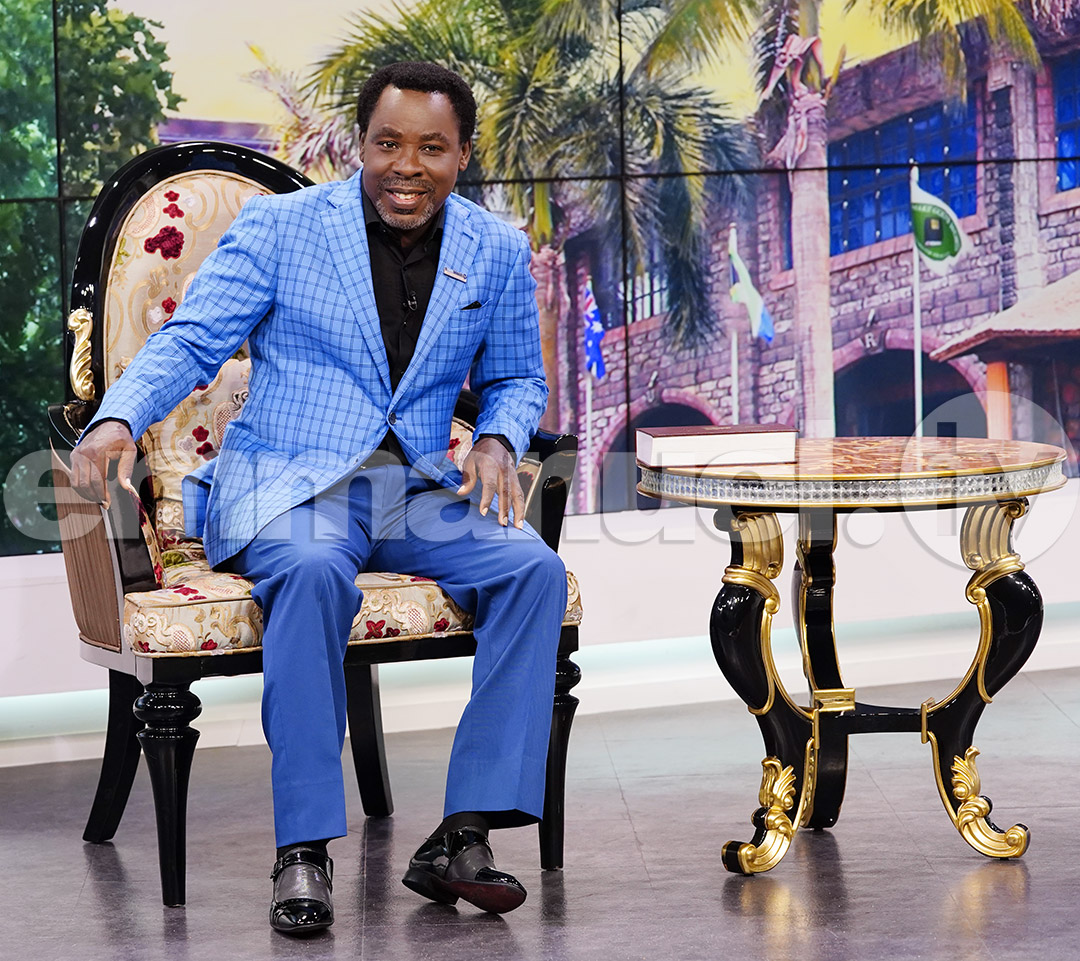 The SCOAN Sunday Broadcast began with songs of praise and worship to the Almighty God, the Alpha and Omega. With melodious songs composed by Prophet T.B. Joshua, the Emmanuel TV Choir welcomed the Holy Spirit who knows no barrier of distance or time. On the performance roll call of songs composed by God’s servant were “I Live To Worship”, “Loved By God”, “Flow From You”, “Yes Lord” and “No One Like You”.

The message focused on the indispensable role of the Holy Ghost in living the victorious Christian life. He asked: “How many of us seek the attention of the Holy Spirit before calling the name Jesus? How many of us seek the attention of the Holy Spirit while counselling, teaching, preaching, praying?” Prophet T.B. Joshua likened the Holy Spirit to the key to a closed door and to light in a dark world. “The Word will remain on our lips without the Holy Spirit,” he said. Putting it in another way, he said: “The Word will remain inactive, meaningless and oftentimes destructive without the Holy Spirit.” He therefore advised Christians to seek to please the Holy Spirit both in the open and in secret because whatever we do secretly and privately will determine what we can do in the name of Jesus. Holy Spirit is more interested in what we do secretly and privately. He further said, “The one you serve in secret, in private will stand to reward you in the open.” He concluded by saying, “We are more of His friend in the open but more of His enemy in secret and in private.”

In praying for the viewers, Prophet T.B. Joshua asked the Lord to fill them with His faithfulness, holiness, obedience, humility. “Fill them Lord, in the mighty name of Jesus Christ. Lord Jesus, strengthen their faith and trust in You. Oh Holy Spirit, think through them till Your ideas are their ideas,” he prayed. He also prayed for those that are sick that Jesus should strengthen them and touch their bodies with good health.

Yinka, Angela, Anne, Chris and Racine not only read the email testimonies but also had a studio session relating to Prophet T.B. Joshua’s message. Chris began by noting that the world has been engulfed in crises mainly because people have failed to be their brother’s keeper by not  extending a hand of genuine love to all irrespective of their social, religious or political affiliations.

Against the backdrop of Matthew 5:45 – “…He causes his sun to rise on the evil and the good, and sends rain on the righteous and the unrighteous.”

Chris said: “It is more pleasant to do good to the ungrateful than to do good to the grateful people, for then we have God as our Paymaster.” Urging people to help others without expecting anything in return, Chris said that “we begin to live a life of victory when those who pray for us are more than those who curse us, want us to die, want us to be destoyed, want us to fail.” He therefore urged viewers to put the needs of others before theirs and ensure to sow a seed of goodness every day.

Sharing their experience via video, USA-based Nigerian couple Mr and Mrs Brownie Isehenrien testified about the divine healing that their baby received only a few days ago. In the early hours of the morning, their child had suddenly suffered difficulty in breathing, accompanied with a sore throat and dry nose. Prior to that time, the child had not been eating well but the parents had been worried when they noticed symptoms that appeared to be those of COVID-19. In faith, Mr Isehenrien had gone on YouTube and dug up a prayer video by Prophet T.B. Joshua. As the video played, he laid the sick child on his chest and placed a hand on his laptop. Moments later, his body started shaking as the power of the Holy Ghost surged through it. After the prayer, the baby’s breathing and appetite returned to normal. To God be the glory!

From Malawi, Ms Idah Sekani shared another faith-building video testimony. Having graduated about two years ago in Agronomy, Idah had thought that she would by now have garnered useful industry experience or proceeded for further studies. However, that had not been the case. Why? Simply because, quite inexplicably, her institution had been unable to find her certificate. And that had meant that Idah could not secure employment or prove, beyond her framed graduation photograph, that she had acquired university education. Upon discovering Emmanuel TV, she decided to send a prayer request to Prophet T.B. Joshua. Within an hour and a half of sending the request, a text message knocked on Idah’s phone. Her certificate had been found! “Trust God, no matter your situation,” Idah advised.

From Zimbabwe, Olivia Chinake and her husband also sent in a video. For four years of marriage, Olivia had been unable to conceive. And there were two reasons for this. While she had hormnonal imbalance causing irregular menstruation, her husband suffered from a low sperm count. Doctors wrote off the couple’s chances of procreating naturally and advised In Vitro Fertilisation (IVF). Many pestered them and even advised them to consult witch doctors.

In faith, Olivia visited The SCOAN and received a touch from God’s servant Prophet T.B. Joshua. A couple of months later Olivia fell pregnant, to the doctors’ amazement. She later put to bed a baby girl whom they named Chinake (God with us). “Trust in God and pray together as a family,” she advised viewers.

For one testifier, it was a case of academic and career breakthrough. For years, the testifier had been seeking a scholarship for his doctoral studies until he started praying along with Prophet T.B. Joshua. One night, his wife dreamed that he had been awarded a scholarship by Prophet T.B. Joshua. In no time, the dream materialised and the man won a PhD scholarship to study Mechanical Engineering in South Africa. The testifier’s wife also dreamed that she had been at The SCOAN and one of the ministers had prayed on her travel documents. Shortly after, she joined her husband for permanent residency in South Africa!

Ruffina, a resident of the USA sent in an email testimony of her healing from sore throat and a neck lump. One night, she had been finding it hard to breathe and had feared that her end had come. Determined not to give up on life, she dove into virtual space and fished out a prayer video of Prophet T.B. Joshua. After the prayer session, divine ease fell upon her. By morning, she was delighted to find herself not only breathing well but also able to swallow effortlessly, as the lump had vanished. Hallelujah!

Anthony wrote in from Micronesia to testify about his brother’s healing from COVID-19. Although the rest of his family had succumbed to fear and had feared the worst, Anthony had placed his trust in God Almighty. As such, with his brother’s picture, he prayed along with Prophet T.B. Joshua and, to God’s glory, his brother has now tested negative for coronavirus. Similarly, Joseph Chokwiro wrote in from Zambia to inform the church that his cousin, a nurse, had also recovered from COVID-19 after he sent in a prayer request on her behalf.

In yet another COVID-19 testimony, 40-year-old South African registered nurse Sindisiwe told of how she and her colleagues had been spared from contracting the virus after being exposed to a patient. But there was more from Sindisiwe, who had begun watching Emmanuel TV only at the start of the lockdown. For years, she had been looking to secure permanent employment but employers had always overlooked her. However, not so this time, as God intervened in her situation. Since June 1, 2020, Sindisiwe has been a tenured registered nurse! To God be the glory!

Racine responded to a viewer’s observation on the matter of tithes and offerings. He said tithes and offerings are scriptural. He therefore explained that since they are things of the spirit, they must come from the heart. “God planned the world and the way different individuals can contribute to the well-being of their fellow brothers. Human society is built on this principle.  This means that a balanced relationship is a function of mutual giving and receiving, with each party being willing to make sacrifices when occasion demands. This is the symbiotic relationship that is approved by God where the people involved benefit or gain from one another.” He went on to say that the beauty of life does not depend on how happy you are but on how happy others can be because of you. “Somebody needs something you possess. It may be your love, care, money, strength or time. The value of God’s blessings is to change lives, change nations and change the world.” he concluded.