FEEDING ON THE LIVING WORD - The Synagogue, Church Of All Nations - SCOAN - Prophet T.B. Joshua (General Overseer) Skip to content 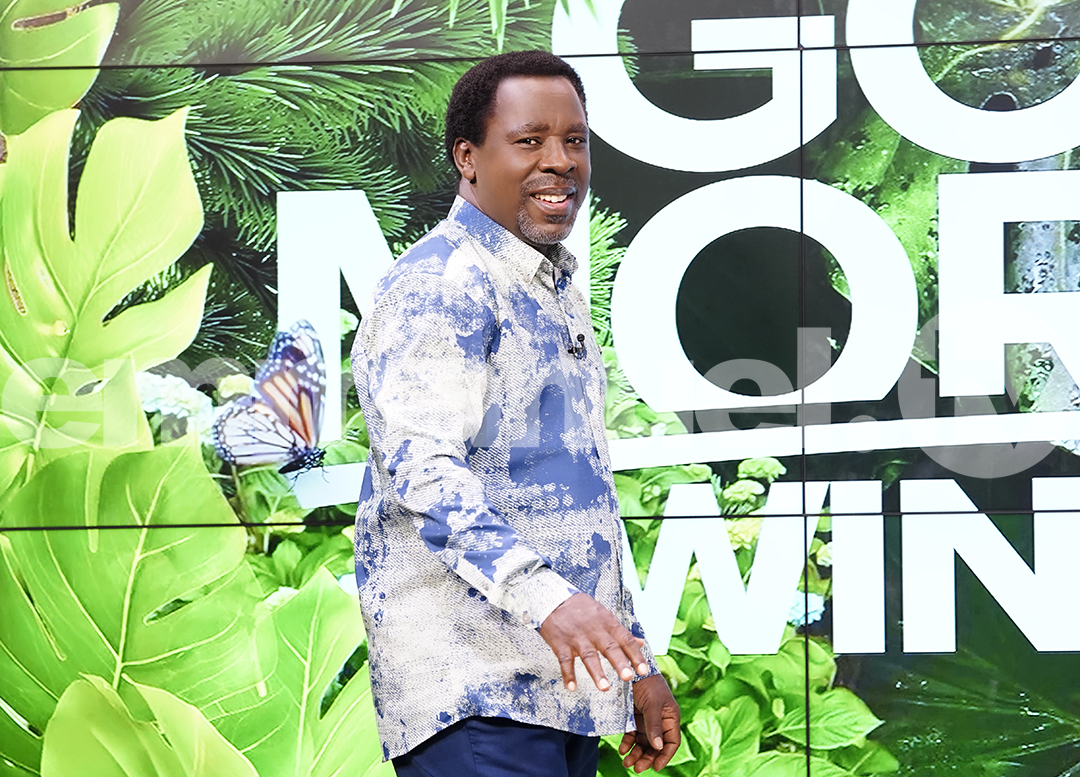 With a touching song titled, ‘Open My Heart’ The Emmanuel TV Choir opened the live Sunday broadcast from the Emmanuel TV Studios. The lively session of praise and worship continued with edifying compositions by Prophet T.B. Joshua, such as “I Will Be With You”, “Anointing”, “God’s Time” and “My Past Is Over”.

For his message, Prophet T.B. Joshua addressed questions from viewers. First, someone asked, “How do we compare meditation to reading the Word and committing it to memory?” To this, the man of God said: “Meditation is inwardly-received truth. It is feeding on Christ, who is the Living Word. Christ Himself is with us in the Living Word because Christ and His Living Word are one.” He added that while committing the Bible to memory may help in the worthy ministry of preaching the Gospel, it is more spiritually edifying to be raised not just on the letter but also the Spirit of God’s Word, belief in which helps to activate God’s power in the physical. This answer thus tied in with the second question, “How can the Word of God work through us?” In answering this question, the prophet quoted John 8:31-32 and James 1:22, two bits of Scripture that emphasise the need to internalise God’s Word and put it into practice. As such, he explained, “The more the Word of God we inwardly receive, the more we resist sin, the more we resist temptation.” He then added, “One may study the Word of God for years. If he does not act it, live it, he is not a doer of the Word.”

The third question was “How do you say, ‘Be healed!’ and there will be healing?” Prophet T.B. Joshua again reiterated the need to act, live or do the Word of God by de-emphasising mental assent, which is merely an intellectual way of engaging with the Bible, in order to imbibe the power of the Holy Spirit through the Word. “The Living Word in us is equivalent to Christ being in us,” he stated, even as he observed that attempting to invoke God’s power without the Holy Ghost’s help has been the cause of considerable misunderstanding and misinterpretation in the Church (1 Corinthians 12:3). As to the fourth question, “How do I resist sin – I mean, temptation?”, the man of God referred viewers to 1 Corinthians 2:4-5 and Psalm 119:99, 130. He further asserted that temptation can only be resisted through God’s Word and the Holy Spirit. In his words, “The Spirit makes us to know that believing is possessing. Because you believe, you receive. The instant you believe, the instant you receive.” God’s servant then prayed for light in the lives of viewers, after which he asked them to make prophetic declarations of freedom on their health and finances, etc.

Again, the studio discussion involved the ministers of God: Chris, Racine, Yinka, Angela and Anne. Using viewers’ questions directed to Prophet T.B. Joshua as their springboard, they addressed issues to do with the coronavirus disease and its management at personal and governmental levels. Regarding the matter of people testing positive again after being initially cured of the disease, they declared that COVID-19 would not stay with the world forever. According to Chris, “Everything that has a beginning must have an end.” To this end, he advised, people should refrain from stigmatising COVID-19 patients. Avoiding stigmatisation, he said, would help people to be more open about their coronavirus status. In his words. “We should encourage those that had COVID-19 to come back to society once they are cured and recovered. COVID-19 is a sickness just like any other affliction.” He thereafter prayed with viewers. “In whichever way COVID-19 affects you – be it physically, emotionally, financially, spiritually – I release you, in the name of Jesus Christ!”

Responding to the question on the rejection of some recovered COVID-19 patients by their relatives and friends, Angela strongly urged viewers to see sufferers as no different from people with hypertension or diabetes, for instance. She also advised government and medical authorities to always announce any underlying illness that might have led to the deaths of patients, instead of declaring coronavirus as the sole cause of death. Angela then prayed: “Whatever negative image COVID-19 has created in your life – be destroyed, in the name of Jesus!”

On his part, before praying for Emmanuel TV Partners, Racine spoke on the need to give from the heart – to the needy and to God’s Kingdom. “Giving for God’s sake is a thing of the Spirit,” he pointed out while urging current and potential partners to realise that giving without being asked is guaranteed to bless both the giver and the receiver. He told the virtual church: “When you know the will of God, you will give without conditions.”

After Yinka read a concerned viewer’s e-mail on her elderly parents’ unduly prolonged use of face masks, Angela presented Prophet T.B. Joshua’s advice to viewers to desist from using face masks that make it hard to breathe out and to use them only in places where they might be at risk of contracting the coronavirus disease, that is, in public. She read, “Breathing the same air in and out or not getting enough air while breathing – all of this can affect your health, cause headaches, fatigue and worsen existing health challenges.” She also read the man of God’s commendation of Lagos State Governor, Mr Babajide Sanwo-Olu’s efforts in containing the virus in the state. She prayed for viewers: “Begin to reason in line with God, in the name of Jesus!”

A number of e-mail testimonies were read by the studio discussants. Anne read one from a medical doctor in South Africa who shared how she was spared from the coronavirus disease by Prophet T.B. Joshua’s prayers, despite hundreds of people being affected in her area. Even though she has worked all through the pandemic, the medical doctor and her staff tested negative for the virus on May 16. Yinka read an email sent in on behalf of a mother and her daughter, both of whom were healed of COVID-19 after a prayer request was earlier sent by a relative. Racine read an email from Cameroon in which a man disclosed that seven of his family members, in both France and Cameroon, were healed of the coronavirus disease. He said he had used his family members’ pictures as a point of contact while praying along with Prophet T.B. Joshua on Emmanuel TV.

Angela also read an e-mail from a UAE-based Indian who testified of the healing of her non-believing friend after he prayed along during The SCOAN broadcast of May 17. A viewer wrote in from Abia State, Nigeria thanking God for healing her and her friend who lives in Osun State, Nigeria. While she was healed of a sore throat and swollen lips after praying along with the prophet and ministering the Morning Water, her friend got off the ventilator soon after his picture was used as a point of contact with God’s power via Emmanuel TV. He thereafter tested negative to coronavirus on his birthday, May 15. “I’m just so happy and I thank God. It was the best birthday present he could ever get,” she wrote. As the string of testimonies continued, Anne read one from Colombia in which Bibiana reported how her caregiver husband was the only one that tested negative for COVID-19 among a group of 30. She equally testifed of how God had healed her of the severe pain in her chest when she thought her time to die had come. Finally, Yinka read a double testimony from Beatrice, who lives in Ireland. Having tapped into the prayer for healthcare workers, Beatrice thanked God for keeping her caregiver husband safe from COVID-19. She also glorified God for saving her nine-year-old son from a potential spinal cord injury when he fell on his back as he tried to climb the stairs. Beatrice said she had ministered the Morning Water on her barely conscious son, calling down the Blood of Jesus Christ as she did so. “Prayer must proceed from and be accompanied by a lively faith,” Yinka concluded.