HOW TO OVERCOME COVID-19 - The Synagogue, Church Of All Nations - SCOAN - Prophet T.B. Joshua (General Overseer) Skip to content 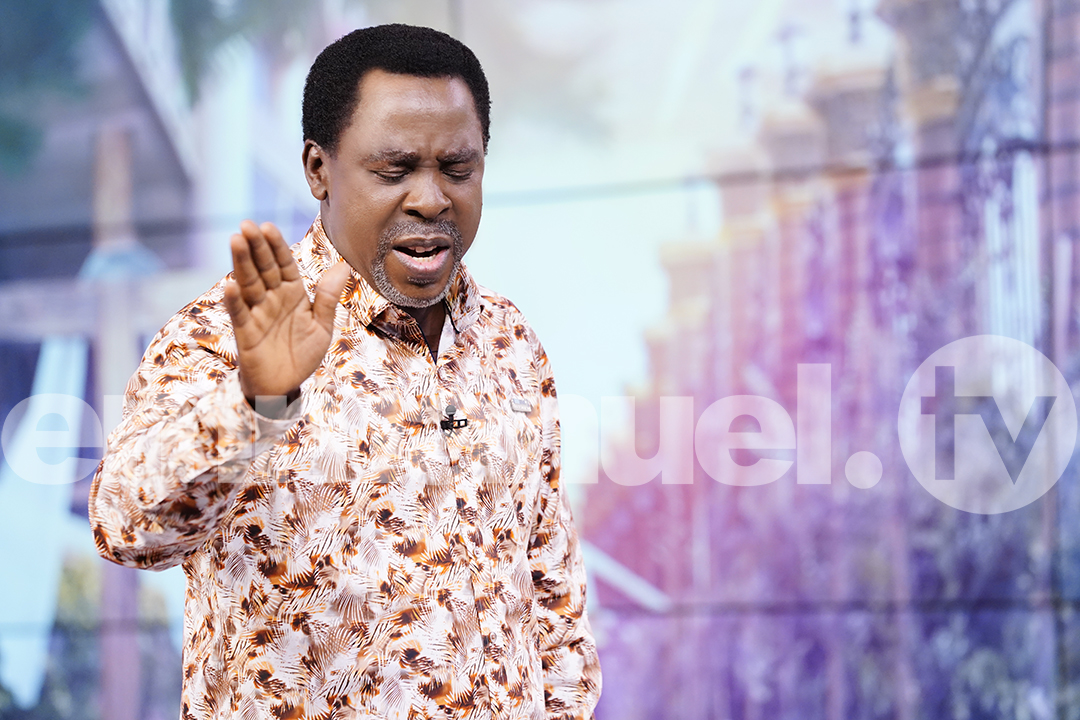 The Emmanuel TV Choir, on Sunday, 17 May 2020 set the pace for a soul-lifting praise and worship with a song composed by Prophet T.B. Joshua titled, “Welcome To My Heart”. With that song, the choir invited the Holy Spirit into the virtual worshippers’ hearts. Other compositions by the man of God followed, such as “I Bind My Body”, “I Press In To Touch You”, “I Love You Lord” and “I Will Dance Like David Danced”. As the session went live over the airwaves, millions across the world had yet another chance to worship God in the beauty of His holiness.

In an impactful studio session, Anne, Racine, Chris, Yinka and Angela discussed the key role that faith plays in receiving from the Lord while praying along with Prophet T.B. Joshua on Emmanuel TV. “Touching the screen has to do with the state of your heart,” Chris noted, adding that “you have to touch it with all of your heart for the salvation of your soul.” Yinka agreed with him but added that the same God-focused heart requirement is needed for reading the Bible profitably.

“Therefore, viewers,” she urged, “let your heart be at its best for God.” Similarly, referring to God’s promise in Psalm 37:4, Anne said, “If your action is genuine, the Holy Spirit will affect it. If you make God your heart’s delight, you will have your heart’s desire.” Continuing the discussion, Racine said, “These prayers are not time-bound; any time you hear these prayers on Emmanuel TV, the Spirit of God is maintained.”

During the question-and-answer segment, Angela read a mail from Germany in which somebody asked, “Prophet T.B. Joshua, what would happen if America truly cuts ties with China?” Taking over from Angela, Anne read out Prophet T.B. Joshua’s response as follows:

“America’s concentration is on big things while China concentrates on small things, e.g. manufacturing and agricultural goods – what developing nations need. Remember, 70-80% of the world are developing nations. What they need to grow, to live and to improve is what China is concentrating on. I think America should learn this lesson. This is what they should turn to.  China is using all these little things to get money from developing nations – making them the richest in the world. It is trade by barter.

It has made developing nations to see China as their hope. For example, a product in America may cost 500 and last, I mean be durable. The same product in China may cost 100 but not last – may not be durable. However, developing nations would still choose China’s products because such products are within their reach. That makes many nations to become debtors to China – even America.”

In response to the question, “How do we overcome COVID-19?” Angela took to the studio pulpit to address viewers. She began by stating that there are two ‘COVID-19s’ – the virus itself and the broader effects of the virus on people and their families. She explained that the effects include indebtedness, depression, suicide, murder, divorce, job loss, change in temperament, etc.

She said that particular ‘COVID-19’ is deadlier and more difficult to treat. However, she advised viewers to take solace in God’s Word in Ephesians 6:12, which helps us to understand that this second ‘COVID-19’ is a case of spiritual warfare. She thereafter prayed for the restoration of viewers in every troubled area of their lives. At this point, Chris stepped in and encouraged people to adopt a different approach in order to overcome COVID-19. He went on to say that people should desist from promoting the disease by choosing not to give attention to it. Talking less of the coronavirus, for instance, is a way of silencing it, Chris continued. On that note, he prayed that the voice, noise and pain of COVID-19 be silenced, in Jesus’ name!

Stating that God’s time is the best for assembling, Chris then called for seeking a way to strengthen the weak members of the body of Christ. In his words, “Those who are strong can join those who are struggling in whatever way, with whatever support.” Done with his message, Chris offered special prayers for unity in the church.

Finally, citing Matthew 25:45, Racine encouraged Partners to persist in sowing seeds of love to the needy, for “love has a language that transcends all languages, all barriers and all distance.”

He touched his screen – and bedwetting vanished!

Mr Stanley Mathotho, a Zambian, had been a bedwetter since childhood. He had tried all he could just to keep his sheets dry but the more he tried, the more he failed. Faced with such an embarrassing condition, Stanley began to have low self-esteem as he entered his teenage years. He could hardly mix with friends and always made sure not to sleep out, for fear of being discovered as a bedwetter. Although his parents and siblings were supportive, Stanley nevertheless ended up nursing suicidal thoughts. At one time, he was so committed to helping himself that for four nights he chose to keep awake just so he could avoid wetting his bed. One night, when he was about 17 years of age, Stanley came across the testimony of a fellow bedwetter on Emmanuel TV. Immediately, he decided he would exercise faith and pray along with Prophet T.B. Joshua. That night, as the young man prayed with the man of God, he felt something like an electric surge in his body. “It was as if something had just entered me,” he recalled, even as he became light and felt peace inside of him. But more was to come, as he later received prayers from Prophet T.B. Joshua in the dream. To Stanley’s amazement, night after night, he kept waking up on a dry bed. Since that glorious day six years ago, Stanley has not wet his bed! He therefore advised people to put their trust in Jesus Christ.

A Harvest of Covid-19 Testimonies

Unlike the case of Stanley Mathotho, who testified via a self-recorded video session, the studio discussants read emails from testifiers who recovered from the coronavirus. In the first email, a testifier from Russia said that his brother recovered from the virus within 10 days as he prayed along with Prophet T.B. Joshua. With his body battered by pneumonia and soaring body temperatures, the testifier’s brother had not been expected by doctors to recover as quickly as he had done. As such, the healed man could only tell them it was God’s work. In a testimony from Nigeria, one Ufuoma thanked God for not only healing her of the coronavirus disease but also protecting her four-month-old infant and other kids from contracting the disease through her.

In her case, Lucy from Malawi had earlier sent in prayer requests to The SCOAN over her uncle’s infection with the coronavirus disease and her own eye ailment. Days later, she wrote back to announce her uncle’s healing from the virus, as well as the disapperance of her eye problem. Lucy reported that she and her family had been praying along with Prophet T.B. Joshua. “Keep protecting us with your prayers,” she urged the Church. Indeed, distance is not a barrier to the power of God, the discussants agreed.

From Ethiopia, somebody sent in a testimony on the lemon water therapy as prescribed by Prophet T.B. Joshua. The testifier said that he had recovered from the coronavirus disease after heeding the Holy Spirit-inspired advice from God’s servant.

From the United Kingdom, a healthcare worker was glad to report that, following God’s mercy, the government no longer needed to use a health facility that had been earmarked for treatment of coronavirus patients. To the glory of God, Prophet T.B. Joshua had prayed for healthcare workers all over the world while at the Prayer Mountain and during the live Sunday broadcasts.

Writing from the United States of America, another healthcare worker reported receiving healing from the coronavirus, having contracted it in the line of work. Not only was the testifier himself healed but his pregant wife was also spared from the disease. He is now back to work.

There was also a testimony from a woman who had earlier sent in a prayer request on behalf of a friend’s sick mother in the US. Sharon said that she had sent a clip of Prophet T.B. Joshua’s prayer to her friend’s mother and that the woman was moved out of intensive care three days later, having regained strength. The woman has now been fully discharged from hospital. Emmanuel!