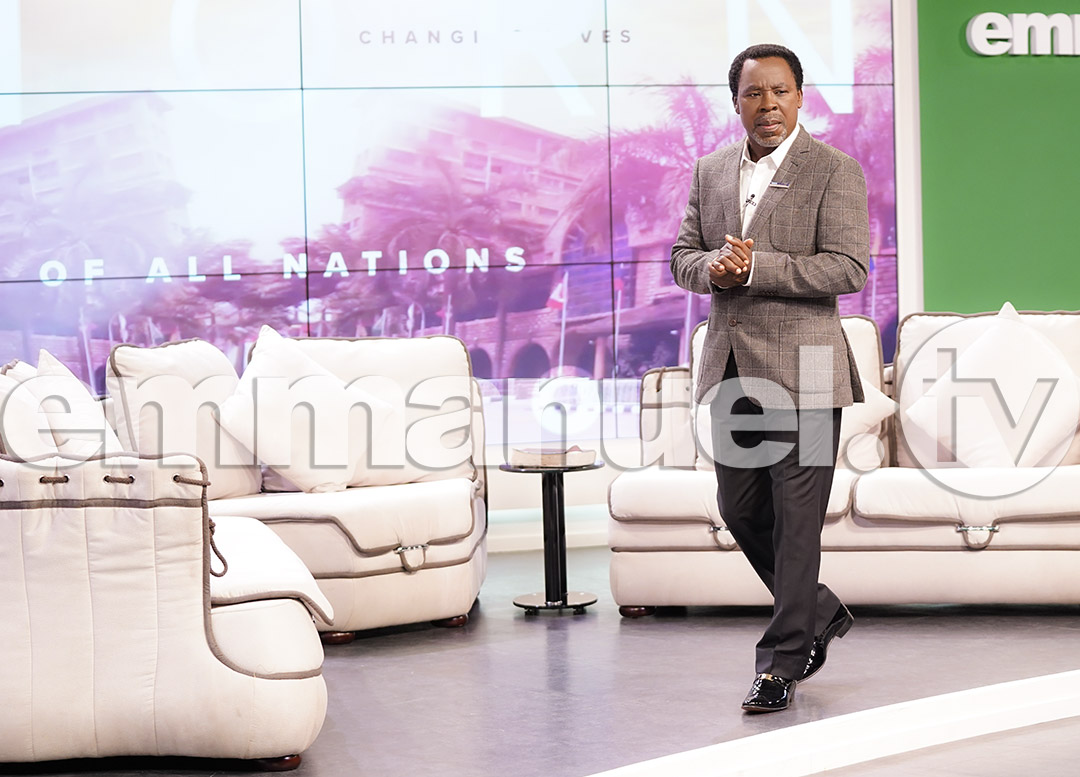 Prophet T.B. Joshua marked this year’s Palm Sunday with messages of hope and admonitions for viewers, world leaders and scientists in an interactive live broadcast from the Emmanuel TV studios. He also responded to questions sent by email from viewers all around the world. In one of his responses, he reprimanded world leaders for promoting panic and fear, adding that it is time for them to consider the plights of the displaced persons of the world who have been forced to leave their countries as a result of crises. Among these people are the Syrians and all other asylum seekers as well as illegal migrants. “This is an opportunity for our world leaders and scientists to look at the trouble spots of the world, e.g. Syria,” he said. He also warned of God’s impending wrath, if world leaders and scientists allow things to remain the way they are. He also promised to keep viewers abreast of further developments with prophetic updates while advising world leaders to hearken to the voice of God, as espoused in 2 Chronicles 7:14.

The man of God insisted that publicising the number of deaths caused by COVID-19 is uncalled for, bearing in mind its propensity to perpetuate fear and uncertainty. He also submitted that world leaders, our scientists know what they are doing, adding that the coronavirus pandemic was the outcome of an error in advanced technology. “The whole thing has to do with error, mistake in advanced technology. Now innocent people are dying, especially the elderly,” he said. The man of God bemoaned the unfortunate death of innocent people across the world, stressing that there is no acceptable excuse for the loss of human lives.

In another enlightening response, the man of God said he prepared for the lockdown, which he had prophesied would affect The SCOAN service, by putting up the new Emmanuel TV studios. He recalled, through video clips, how he had foretold the development on three different occasions – 24th February, 2019, 7th April, 2019 and 5th January, 2020. He also recalled the prophecy he gave about the nation, South Africa, since 2013, in which he had warned about a violent protest by the youth. Prophet T.B. Joshua added that, when it became clear that nothing could be done to avert the attack, the Emmanuel TV transmission centre, which was in Johannesburg, had to be relocated to Germany.

In consonance with his philosophy of little beginnings, the man of God gave a lucid response to a viewer whose mail sought an explanation as to how he weathered the storms of life in his ministry’s metamorphosis. “If I don’t know where I am going, I would have given up a long time ago. Are you talking about the persecution of your generation? Are you talking about the attacks there and then? Because I know where I am going; I know behind those attacks, there is a future. Everything big starts little. If something big starts big, it calls for concern.” He declared that there is time for everything – time to be born and time to grow, time to face persecution and time to reap the fruit of your labour. He added that any life that does not follow this process is bound to face obstacles.

And on whether he falls ill or not, the man of God observed that as a human, he sometimes experiences tiredness due to pressure of work. He however added that such a condition usually disappears whenever there is a task to be accomplished. “My outward part, the shell, sometimes falls ill but once it is time for assignments, I am relieved. When the assignments finish, the pain may reoccur”, he said.

Concluding, Prophet T.B. Joshua prayed for viewers all over the world: “I want to pray with you. Viewers all over the world, if we throw up our hands, God’s hands have room to work. Like a little baby who opens his arms, viewers, with all your heart, pray with me. In our heart, we are made to be like Jesus.” The man of God commanded all the chains of affliction, career failure, stagnation, marital and economic challenges to be broken, in Jesus’ name. “I can see chains breaking! This is not an idea; this is the reality. I can hear the sound of the chains! He has healed you, delivered you, restored you, redeemed you, saved you. Thank You, Jesus!”, he concluded.