THE HEART OF PRAYER - The Synagogue, Church Of All Nations - SCOAN - Prophet T.B. Joshua (General Overseer) Skip to content 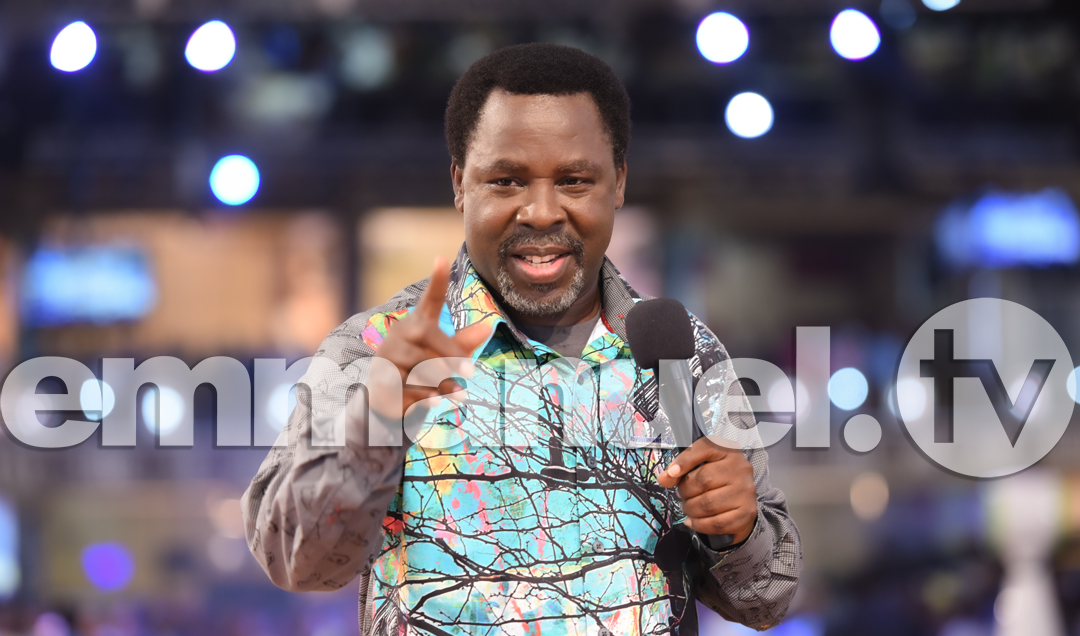 The praise and worship session was another opportunity for The SCOAN Choir to call down the host of Heaven, whose presence could be seen in the numerous cases of manifestation and vomiting of evil deposits that occurred during the singing ministration.

The day’s message was given by Prophet Chris, who spoke on the topic “THE HEART OF PRAYER”. He described prayer as “a relationship that exists between God and His children” that should be nurtured at all times, not only “in times of trouble.”

In a catchy turn of phrase, Prophet Chris said, “The heart of prayer is prayer from the heart,” adding that “Prayer of the lips should just be an overflow of the prayer from the heart” and that “Our situation should not dictate the direction of our prayer.” The proof text was taken from Ephesians 6:18 —“And pray in the Spirit on all occasions with all kinds of prayers and requests. With this in mind, be alert and always keep on praying for all the Lord’s people.” Prophet Chris also read from 1 Thessalonians 5:16-18 (NIV)—“Rejoice always, pray continually, give thanks in all circumstances; for this is God’s will for you in Christ Jesus.”

Prophet Chris explained that successful prayer always comes from a faith-filled heart that gives no room to offence, bitterness, resentment, revenge, pain of the past and unforgiveness, for which he cited Psalm 66:18. In his closing words, he urged congregants to pray continually in their hearts. “If you know how much you need God, you will realise there is nothing too little to pray over. You should acquire the habit of praying over little things, as well as big things,” he concluded.

After the ministration, satan’s kingdom was put into disarray as the prophetesses and prophets joined the congregation and viewers for the healing, laying of hands and mass prayer sessions.

“NOW I CAN LIFT ANY MOUNTAIN!”— MAN HEALED OF A STIFF NECK

Following an accident in 2009, Mr Timothy Ugban developed cervical spondylosis that caused him a stiff neck for 11 years. The Benue indigene had to depend on a neck collar to help ease his pain, in addition to physiotherapy sessions and drugs.

Although he had been managing to carry on with his condition over the years, sometime in February 2020 Timothy suddenly found that his spinal cord could no longer carry his head.” He rushed back to the hospital, where doctors prescribed further physiotherapy sessions and drugs. “I decided to discard medical treatment and seek spiritual help,”

Timothy said about his visit to The SCOAN two Sundays ago. He told the church last Sunday of how he had been unable to sleep for weeks. He also disclosed how an anointed touch had healed him. “Now I feel like a young boy and can lift any mountain,” he told congregants. Exercising his neck in all directions, Timothy flung away his neck collar and advised people to act in faith as they seek God’s face.

For ten years Ghanaian Mrs Cecilia Aluah suffered from degenerative disc disease and cervical spondylosis, a condition that gave her difficulty in walking despite her use of a body brace and an orthopaedic mattress. Consequently, the fieldworker had severe difficulty in performing her duties. “Please I want you to pray for me for Jesus to heal me of every sickness I’m having,” Cecilia appealed to Woman of God, Angela two Sundays ago.

“Thank You, Jesus; I’m healed,” she declared after the prayer, rising to her feet without the aid of her body brace. Last Sunday, the 42-year-old returned to church for her testimony. She told of how she had visited witch doctors to no avail and how she had been praying along with Prophet T.B. Joshua on Emmanuel TV.

“It was God’s grace that located me,” Cecilia said as she narrated how for three days she had felt as if some kind of stitching was going on in her body, after the anointed prayer. Saying that she can now do everything without any help, she advised people to take their problems to God.

“I COULDN’T WALK BEFORE; NOW I CAN WALK LIKE A KING”— MAN HEALED OF SPONDYLITIS

A school teacher from Kogi State, 57-year-old Mr Michael Adeleye received his freedom from lumbar spondylosis/ankylosing spondylitis two Sundays ago, after prayers in the mighty name of Jesus Christ.

“I took many medications, both herbal and medical, all to no avail,” Michael told the church during his testimony last Sunday. He told the church that he had felt reflex movements around his waist area as Prophetess Angela laid an anointed hand on him during the prayer session.

“To God be the glory,” he declared. No longer needing his lumbar corset, Michael displayed his healing to the church, saying, “I couldn’t walk before; now I can walk like a king!” He urged people to have faith in God.

DELIVERED FROM ADDICTION TO CHAIN SMOKING

The first time he smoked, Japanese Mr Maiki Ohashi was only 14 years old. From then on he became addicted, smoking about 60 sticks of cigarettes per day as he sought to feel good. Instead of feeling good, however, Maiki began to find it difficult to think clearly, making mistakes at work and at home. He would also cough most of the time, even as he began to have nightmares in which he was being chased around.

In 2014, having been introduced to Emmanuel TV by his wife, he had placed his hand on the screen as he prayed along with Prophet T.B. Joshua. For 30 minutes, Maiki recalled during his testimony last Sunday, the hand had suddenly stiffened. He thereafter fell asleep and when he woke up he had lost all interest in smoking. “That day I thrashed all the cigarettes in my house,” he reported. His work productivity improved and his employers now have more confidence in his abilities. “We cannot help ourselves; only Jesus can help us,” he advised the church.

WOMAN FROM UKRAINE HEALED AFTER VOMITING AT LIVING WATER SERVICE

During the Living Water Service of two Mondays ago, Prophet T.B. Joshua had begun the prayer session with the following words: “Let someone say, ‘Mercy! Son of David, have mercy on me. Let Your mercy speak for me; let Your favour speak for me. Mercy! Mercy! Mercy!’” And that mercy had indeed located Mrs Antonina Zhuzhuk, who had flown in all the way from the Ukraine, alongside her husband Dmytry.

Apparently, Antonina had prayed from the bottom of her heart as the man of God instructed, hence her vomiting of the evil deposits that had been in her system for years. For 20 years she had back pain owing to a herniated disc and for five years she had a swollen belly, which was always hard and painful. Despite eating very small portions of food, she had gained a lot of weight and her belly had kept swelling, causing her to burp always.

“We started watching Emmanuel TV three years ago and we realised there was hope,” Antonina said during her testimony on Sunday, even as she exercised her body to demonstrate her healing. Now she can eat well and no longer burps. She advised people to have faith in Jesus Christ. Dmytry expressed delight at his wife’s healing and told of how he himself was healed of a headache he had been experiencing for 34 years.

Another recipient of God’s mercy at the Living Water Service of two Mondays ago was Ghanaian Mrs Faustina Robertson, who was healed of a stiff neck caused by cervical spondylosis.

The problem had affected her life in many ways: She could not walk or sit for long; neither could she cook or wash clothes and she mostly depended on her husband and grandchildren for support. Her neck strapped with a collar, 63-year-old Faustina had climbed on The SCOAN Mountain of Prayer, where she lay as she made heart contact with God. Minutes later, she sprang up in excitement and flung off her neck collar in demonstration of her perfect healing in the mighty name of Jesus Christ.

On Sunday, during her testimony, Faustina told of how much pain she had suffered while the stiff neck lasted. “I suddenly felt the hand of God upon me,” she said of her experience on the Mountain of Prayer. And when she ministered the Living Water, she said, a hot sensation enveloped her neck. She advised people, “It is all about Jesus, the Author and Finisher of our faith.”

A Tajikistani living in Germany, Ms Fotima Ruzieva was also divinely impacted at the Living Water Service. She used to hear a constant clapping sound in her ears and this caused her severe irritation, as she could not easily communicate with people. Fotima also had difficulty swallowing due to a blockage in her throat.

However, after ministering the Living Water in her ears and drinking some of it, the 39-year-old felt divine relief and no longer hears the clapping sound in her ears, even as she can now eat and drink without any impediment.

In her testimony on Sunday, she said she had sought solutions at hospitals and prayer houses but to no avail. Fotima advised people to follow Emmanuel TV.

The family of Hon. Chibuzor and Mrs Patience Okanu recently experienced a double dose of God’s miracle at The SCOAN. At six months of pregnancy, Patience had been told that her child was not well-positioned. She had run to The SCOAN for prayers, after which doctors confirmed that the baby had taken the right position. She then had a dream in which she was told that she would lose the pregnancy at eight months.

She also had a dream in which Prophet T.B. Joshua assured her that the sky would be her limit if she overcame the trial she was facing. Before the pregnancy turned eight months, Patience ran again to The SCOAN for prayers. As at a fortnight ago, Patience’s pregnancy had become overdue. She ran again to The SCOAN for prayers in the mighty name of Jesus Christ. Once back home later that Sunday, Patience began to have contractions and by Tuesday her baby boy was born! Hon. Okanu thanked God for shaming the devil and his agents over his wife’s pregnancy, and as the couple promised to train up the child in the way of the Lord.

“I really want to be in the gap between you and your wife. Anybody that sees the two of you will think that things are in order. Things are not in order.” Those were the words of prophecy for the Igbineweka couple. During the prophecy, God’s servant T.B. Joshua had also asked, “Where is this boy?” To this, Mrs Mercy Igbineweka had answered, “He is in school.” “He is going to be great,” the prophet had assured her, even as he noted that the boy would be bald-headed.

All of the prophecies were confirmed by the couple. Last Sunday, Lt. Col. Igbineweka returned to church with his wife to speak about the prophecies. He disclosed that his 17-year-old marriage had been facing challenges, especially because of his wife’s health. He said he had been contemplating quitting the marriage and had in fact engaged in affairs, even though he didn’t want to engage in polygamy. He also spoke about his son’s mechanical capacities, even as he showed a picture of his balding son. Since the prophecy, the army officer disclosed, there is now love in the family. Teary-eyed, Mercy spoke of how her health issues had been a source of constant sadness, causing her to develop suicidal thoughts. Since the prophecy, she said, “Now I see my husband as a young man.” She advised people to seek God’s help for their marital and other problems. Lt. Col. Igbineweka advised intending couples to seek God’s guidance.