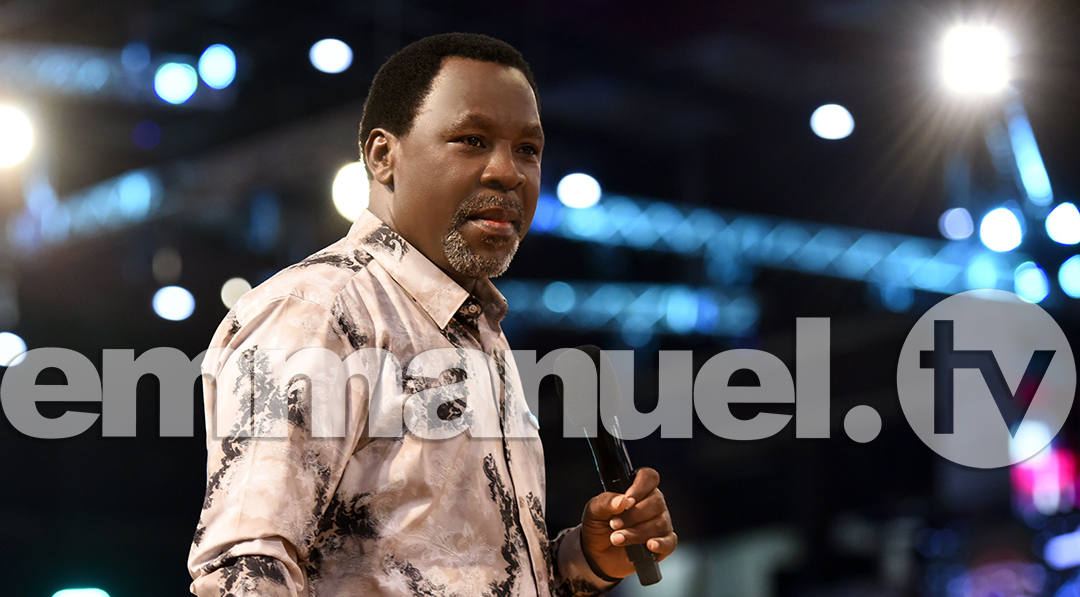 The living presence of the divine power of God was tangible in the air as The SCOAN Choir rendered songs of worship in the second Sunday Service for the year 2020. As they moved from song to song, the Holy Spirit overshadowed ‘The Arena of Liberty’ and congregants began to fall under the anointing as they walked into their freedom from disease, lack, indebtedness, disappointment and a host of other problems caused by the devil and his agent.

Prophetess Yinka described the New Year as “A NEW OPPORTUNITY”, a message which focused on the need for Christians to seize the opportunity of a new year to amend their ways before God and to change their behaviour towards others. She took her proof text from Ephesians 4:17-23 but also read from Matthew 26:41, Proverbs 15:33, James 4:10, 2 Chronicles 7:14, Galatians 2:20 and Joshua 24:23. Prophetess Yinka strongly encouraged Christians to engage in serious self-examination and “to maintain a steady focus in an unsteady world.” 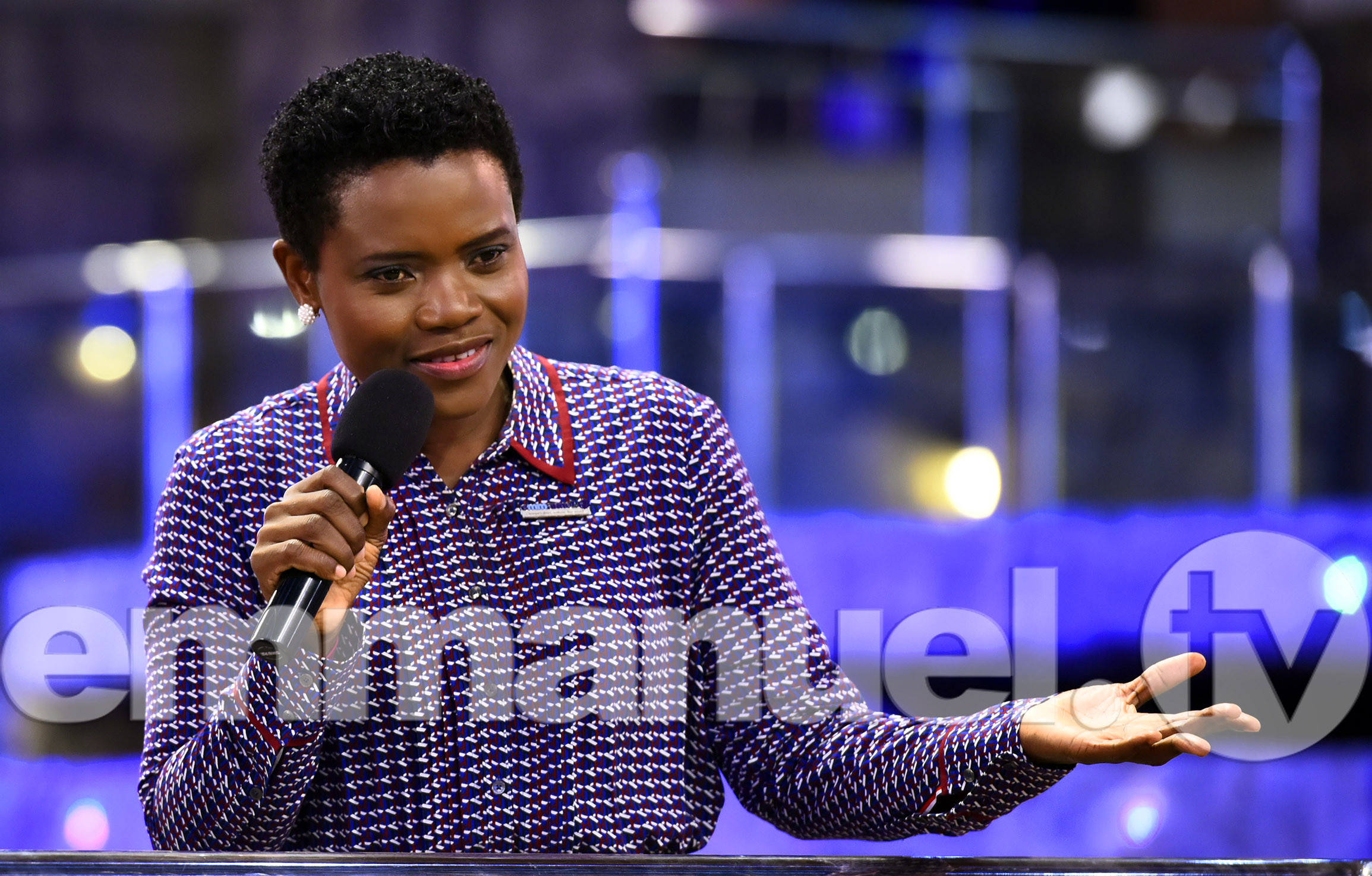 The woman of God told congregants that they had to live in humility and that they could not keep worshiping their old selves, since genuine Christianity comes out of conversion rather than mere conviction. Consequently, she added, our conduct must match our faith confession if we must enjoy God’s blessings. She also warned congregants to be wary about the challenges of the New Year and concluded by exhorting congregants to follow the good road to the good life by praying more, reading the Bible more and loving and helping others more.

After the message, the Lord worked wonders through His servants Prophetess Yinka, Prophet Racine and Prophet Chris. Again, the Spirit of the Lord moved in ‘The Arena of Liberty’ and many contrary spirits were chased out of the lives of God’s children. 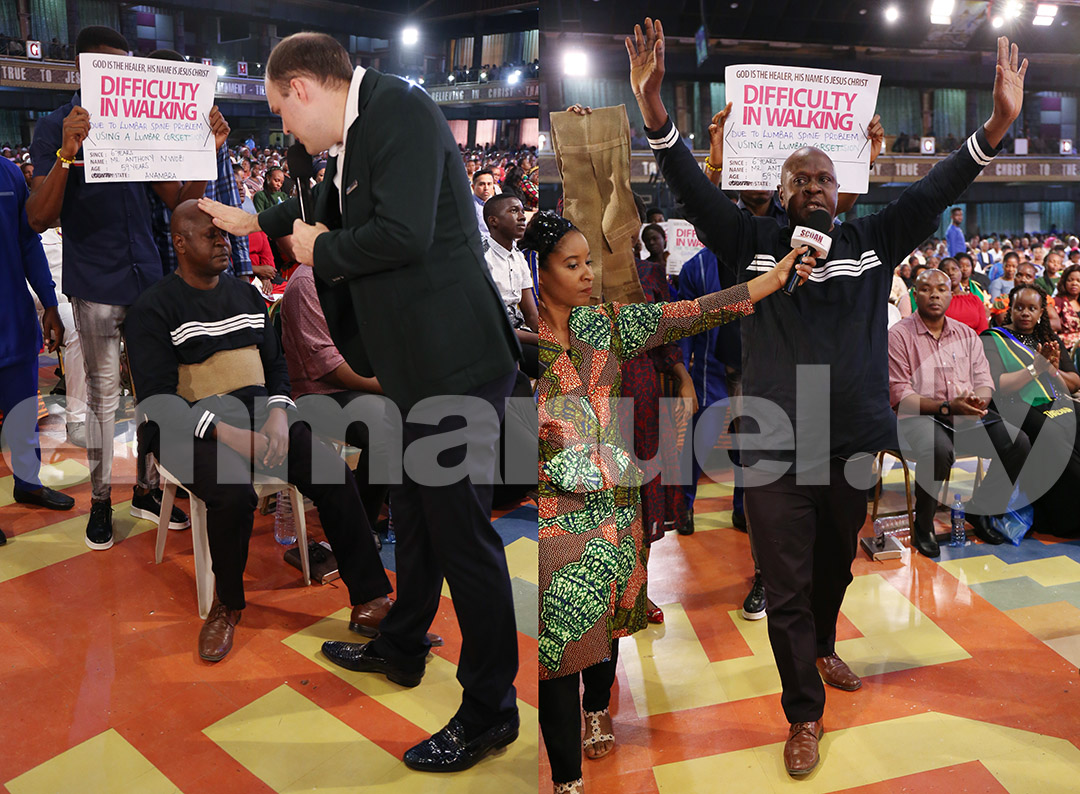 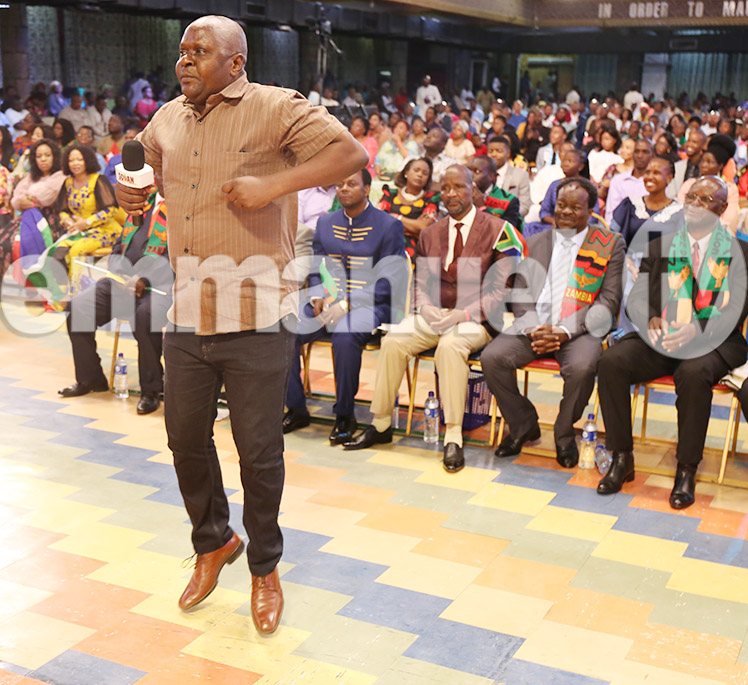 Fifty-nine-year-old Mr Anthony Nwobi, from Anambra State, had suffered from difficulty in walking due to a lumbar spine problem. Despite undergoing an operation, he failed to get the relief that the doctors had promised him. With his lumbar corset, Anthony managed to get very little relief, so he took his problem to God Almighty. Two Sundays ago, at The SCOAN, he received prayers in the mighty name of Jesus Christ. In his testimony on Sunday, Anthony told of how he had gone to different places in search of a solution to the excruciating pains all over his legs. In one of the places he went, they managed to extract some cowries and metal objects from his left legs but the pains simply moved to another part of the leg. “I always felt as if I was standing on hot iron,” he told the church. “Jesus Christ is the Healer of our wounds,” Prophet Chris assured Anthony as he prayed for him during the Sunday Service. “Right now, the root cause of that pain – be exposed, in Jesus’ name!” Chris decreed. After the prayers, Anthony stood up and walked steadily and painlessly again, after six years! He told the church, “I could not walk long distances without feeling pain but since last Sunday I have regained strength in my body,” he disclosed. Anthony showed evidence of his healing by jogging on the aisle and exercising his waist and lower limbs. He advised people to have their motto as, “God! God! God! and “Christ! Christ! Christ!”

THE “IRON WOMAN” IS NO LONGER UNDER BONDAGE OF NUMB FINGERS 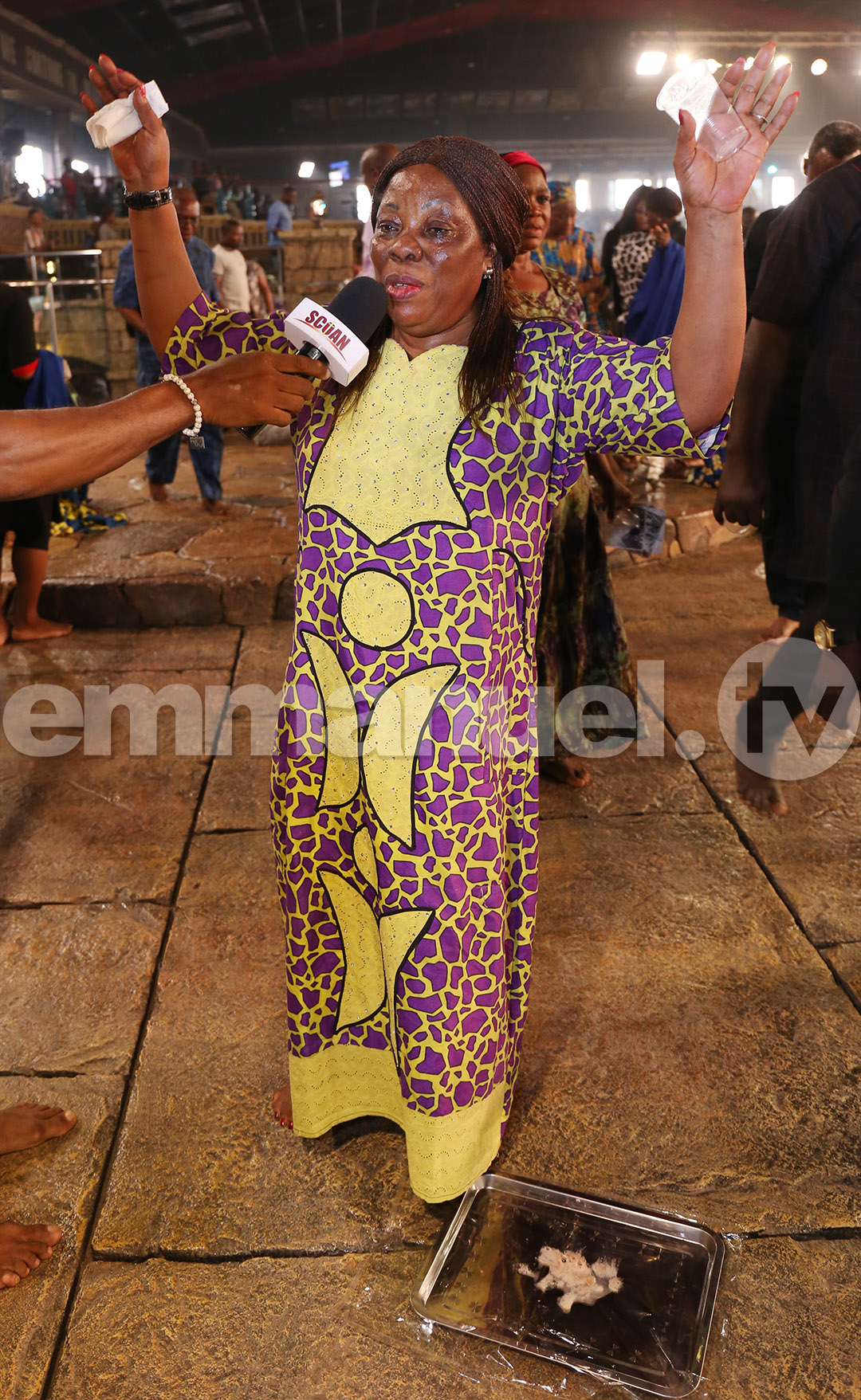 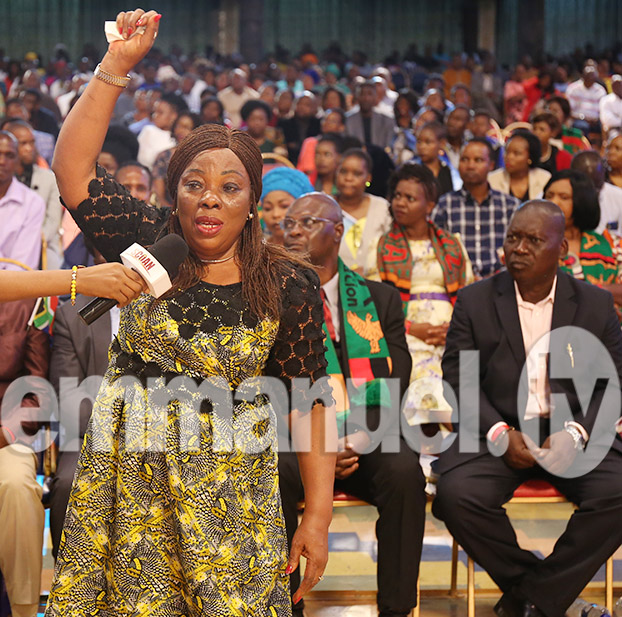 When she attended The SCOAN Living Water Service two Mondays ago, Rivers State-based Dr Daba Boyle had been suffering from numbness in her fingers, a condition that would have naturally degenerated into bilateral neuropathy. A retired pharmacist who understood the nature of what she was experiencing, Daba would always exercise the fingers of her right hand to keep the blood flowing to them. The condition prevented her from standing or moving for long periods. Before stepping on The SCOAN Mountain of Prayer that Monday, Daba had expressed firm belief in God’s capacity to heal her. After communing with God on the Mountain, she started to vomit the evil deposits in her system. Moments later, she proceeded to drink the Living Water and minister some of it on her shoulders, face, hands and legs. And that was the end of her pains. In her testimony on Sunday, Daba said she had refrained from taking drugs since they would cause dependency and lifespan reduction. “When I climbed the Mountain, I felt something move in my sacrum, the last bone on the spine,” she added. Full of joy that all the pain and numbness had disappeared from her body, Daba thanked God for saving her from potential Parkinson’s disease. “I prefer divine healing to use of drugs,” she said, urging people to put God first.

DIVINE DELIVERY OF BABY MUNACHIMUSO AND HEAVENLY CURE FOR FIBROIDS 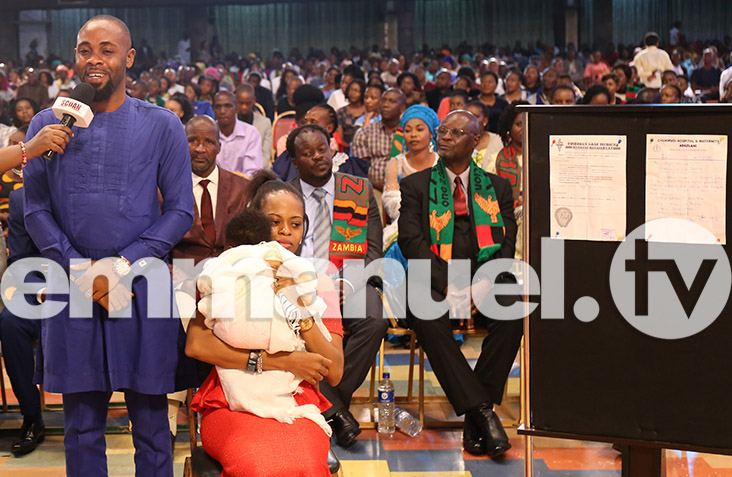 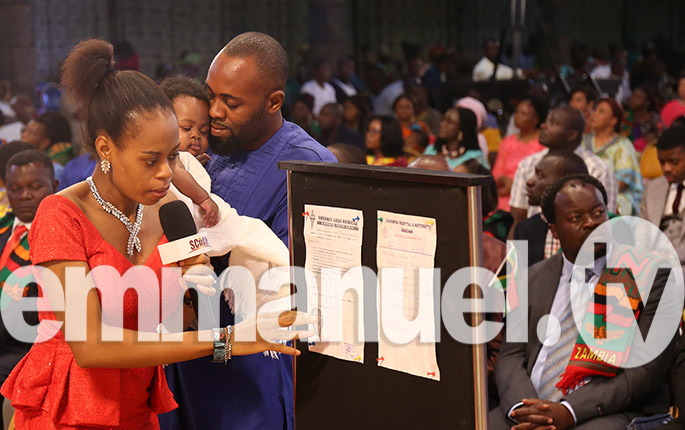 Because she had multiple fibroids, Anambra State indigene Mrs Okoye experienced several complications during pregnancy. She and her husband ran from pillar to post, until it took Mrs Okoye’s South Africa-based sister to direct them to The SCOAN. During a Sunday service sometime ago, the demon in Mrs Okoye manifested as Prophet Chris laid an anointed hand on the heavily pregnant woman. During the following day’s Living Water Service, Mrs Okoye also received a divine touch as she stepped on The SCOAN Mountain of Prayer. Her doctors had declared that only by an operation would she be able to have her baby and get rid of the fibroids. Even then, the doctors made clear, she had only a 50-50 chance of success. Undeterred, the couple chose to pray along with Prophet TB Joshua on Emmanuel TV. “During one of those prayer sessions,” Mrs Okoye reported, “dark smoke came out of me, then another one.” Afterwards, she became light and began to feel labour pains. At the hospital the following morning, the doctors claimed they could see neither the womb nor the baby. However, Mrs Okoye rejected the report, like her husband. Immediately, Mr Okoye called one of the SCOAN prayer lines. While the prayers were going on in the mighty name of Jesus Christ, the baby started to come out and Mrs Okoye’s blood pressure normalised. To the glory of God, the baby popped out with little or no push, leaving the medical personnel surprised. What was more, further examination showed there were no more fibroids in Mrs Okoye’s womb! Mr Okoye said his wife had started to shake as the prayers went on over the phone. He advised men to be particularly close to their wives during pregnancy, while his wife advised women to have total faith in God. 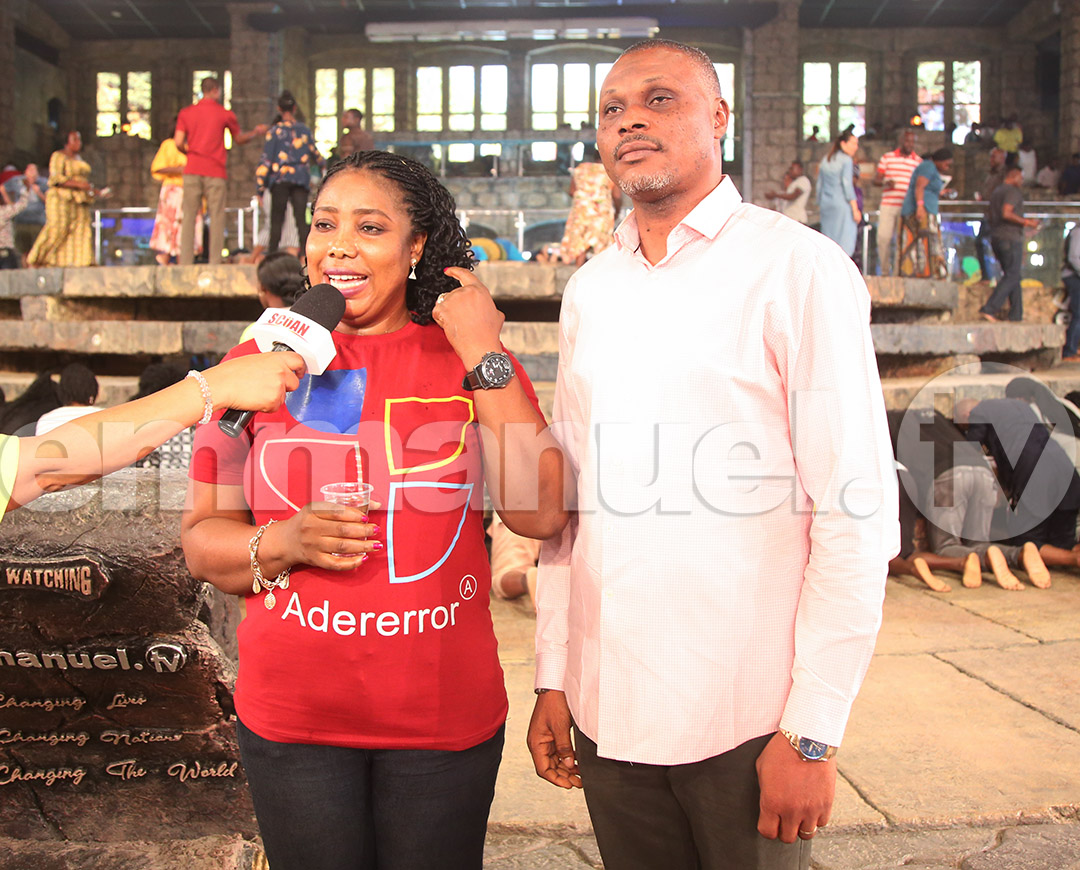 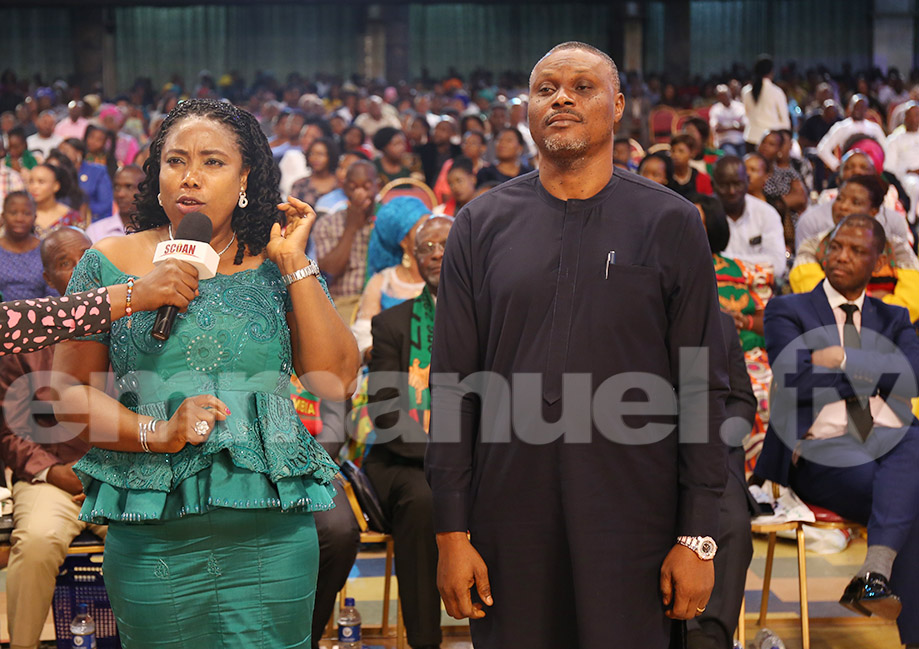 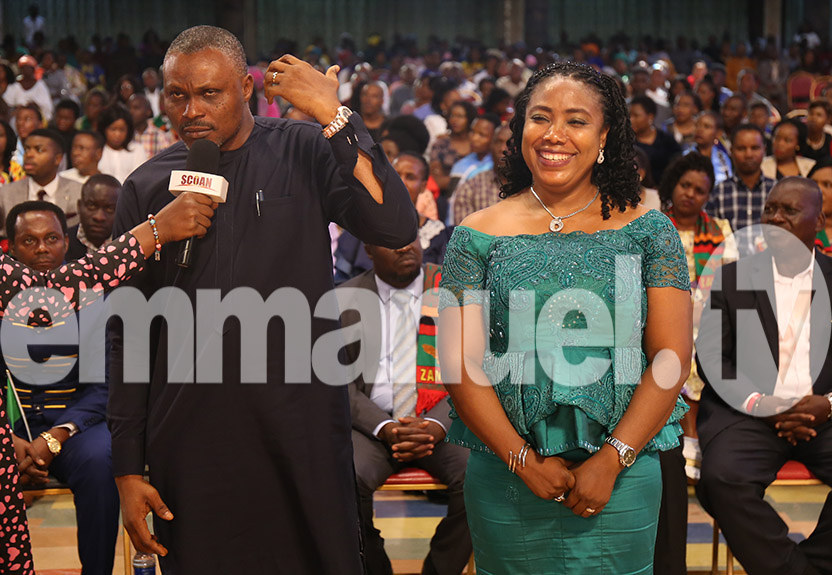 Abuja resident Mrs Deborah Benedict said during The Living Water Service of two Mondays ago, “What brought me to The Synagogue, Church of All Nations was my left ear – I used to have serious pain inside. And when the pain comes, if I hit my head I will be hearing a noise inside. The pain became very severe. When I climbed the Mountain, I went to take the Living Water. I decided to pour it inside the ear that was disturbing me.” Immediately, she felt a stinging sensation in the ear that forced her to scream. As usual, she tapped her head but the “trailer noise” of over one year was no longer there, just as the pain had disappeared. In their testimony last Sunday, Deborah and her husband, Gabriel, glorified God after sharing details of how the hearing problem had tested their faith. The Sunday before her healing, Deborah had thought of giving up on God about her healing but her husband had encouraged her to keep believing. So, during her time on the Prayer Mountain, Deborah had asked for God’s mercy and favour, declaring, “Today is my day!” After prayers on the Mountain, she fetched the water and ministered “just a drop of it” in her left ear. “It felt as if an operation was going on,” she recalled. Now, she can receive phone calls from the left ear and no longer feels pain there. In his contribution to the testimony, Gabriel declared about The ‘Arena of Liberty’: “Indeed, God is here! Indeed, God is working in this place! Indeed, God exists in this place!” “Just believe – and receive,” Deborah advised.

It was instantaneous healing for 47-year-old Mrs Vera Okwudibia, who suffered for eight years from ovarian cancer that caused her to have a swollen stomach, making her look heavily pregnant. The cancer rendered her virtually helpless, as it affected her breathing and made her perpetually weak. As such, she relied on her husband and children for help to do things. As God’s servant Prophetess Yinka prayed for the root cause of Vera’s problem to burst, the ailing woman truly felt something burst in her. Immediately, she went to check herself in the restroom and found that blood and other poisonous substances had come out of her. Vera pressed on her stomach and stretched her body even as she told the church that she is no longer in pains. “Now, people will no longer be wishing me a safe delivery,” she stated. “Thank You, Jesus!” she cried.