A MAN AFTER GOD’S OWN HEART - The Synagogue, Church Of All Nations - SCOAN - Prophet T.B. Joshua (General Overseer) Skip to content 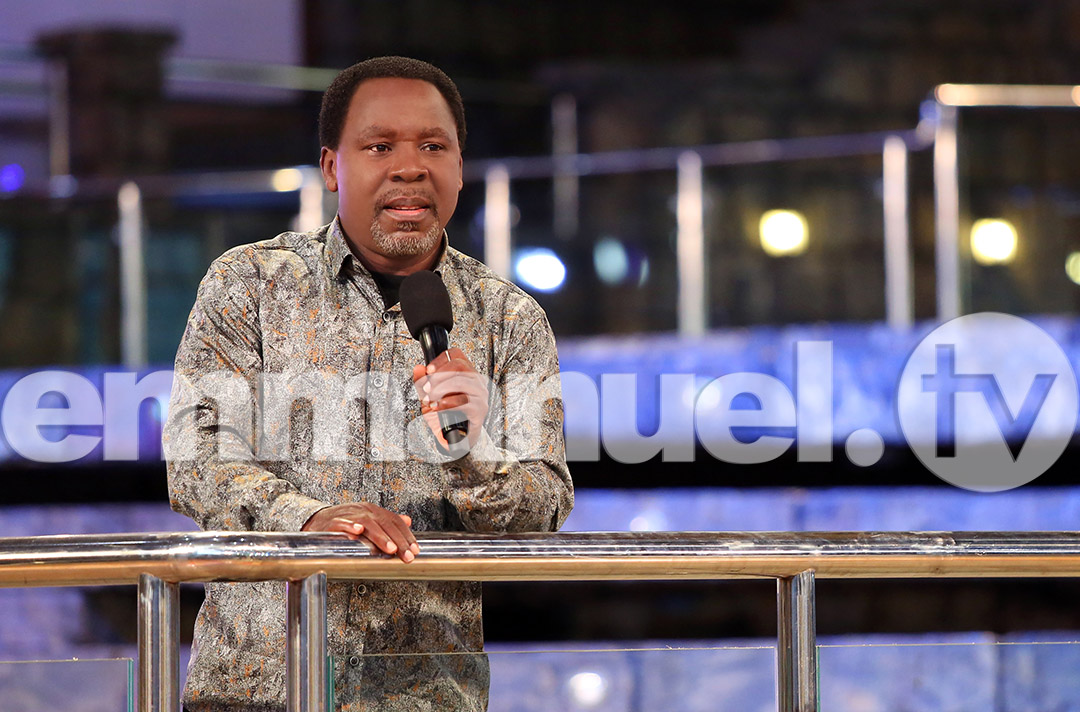 The SCOAN Choir started by urging the weak to confess strength, then they blessed the name of the Lord before asking the Ancient of Days and the Lion of Judah to come forth and “take us in as we surrender to the will” of Oluranlowo, our Helper at all times. Indeed, the praise and worship session prepared congregants’ hearts to receive from the Lord yet again. 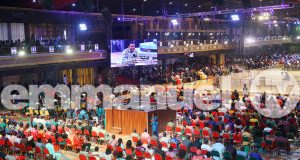 Prophet TB Joshua began his exhortation on an interactive note, asking a number of congregants to respond to the question, “How do we know God?” After receiving several different answers, the man of God added: “We know God by the way He speaks. The way He speaks represents His heart.” He stated that “God’s promises are only recorded in the Bible and without God’s promises, our faith is not real faith. He referred the congregants to the Book of Romans 10:17 which says that faith comes through His Word”.

To this end, Prophet T.B. Joshua stressed the need for us to have a right standing with God so that we can receive answers to our prayers. Finally, he again asked congregants to show love to those who despise them, even as they pray in the name of “Jesus in the power of the Holy Ghost.” 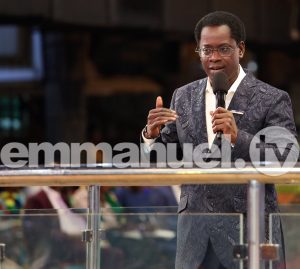 Prophet Racine gave a message titled A MAN AFTER GOD’S OWN HEART, citing the passages Matthew 15: 8, Acts 13: 22, Galatians 1: 15-17. He began by noting that many tend to fall into the error of appearance, wherein they focus on the physical attributes and skills of those professing to know God, instead of the focusing on the heart, which is the real person since it is “the seat of desire, will, emotions, wisdom, knowledge, conscience and moral character.” For anybody to be used by God, Prophet Racine explained, they have to be melted first, then remoulded into a divine vessel and get filled with the Holy Spirit.

Prophet Racine added that the battle between the flesh and the spirit is the reason why some people are still followers in God’s kingdom when they have actually been called to be leaders. He then stated that “Our way of thinking, our way of life needs to be reformed to suit Christ’s purpose for our lives,” since God makes us useful in His Kingdom by melting and refining us “through tribulation, through trials, through temptation.” As such, he concluded, “The impact of those trials on ourselves separates us from impurities, separates us from pride, arrogance, anger, resentment and causes the character of God to grow in our lives.”

Mr Clemence Gyato’s testimony, last Sunday, was yet another confirmation that Jesus never said there would be no more miracles and healings. Two Sundays ago, he had at last visited The SCOAN, having been watching Emmanuel TV for quite some time. 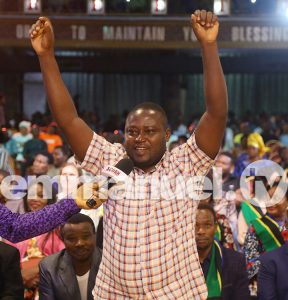 For the last five years, the 45-year-old had been afflicted with the problem of a stiff neck due to cervical spondylosis and multiple disc prolapse. The condition prevented him from doing his business effectively. Moreover, he could not carry out his research activities as a doctoral student. Doctors suggested surgery to him but they also warned him about the risk involved. To help himself, he massaged his back with hot water bottles but got more pain in the process. With a swollen neck locked inside a neck collar, Clemence searched for a solution in different places, including the homes of native doctors. One thing had stood in the way, however: his lack of belief in miracles. 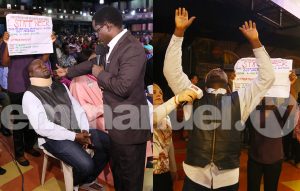 However, having watched on Emmanuel TV God’s miraculous healings taking place in the lives people, he decided to come to The SCOAN. After prayers in the mighty name of Jesus Christ, the Ghanaian witnessed God’s power at work as he received his perfect healing. Before closing his testimony, he advised people to stop doubting God’s power.

AN END TO NINE YEARS OF PAIN FROM LUMBAR SPONDYLOSIS

“I believe, in the mighty name of Jesus Christ, my problem will be solved forever,” so had Ms Anna Labojo declared as she prepared for her divine appointment two weeks ago. A former Human Resources Assistant with the United Nations, Anne had been forced to retire early due to the problem of difficulty in walking, a condition that had resulted from lumbar spondylosis.

For about nine years, she had suffered excruciating pains, which she described as feeling like having boiling water on the feet. With no relief from her lumbar corset, the 62-year-old had managed to make her way to The SCOAN. 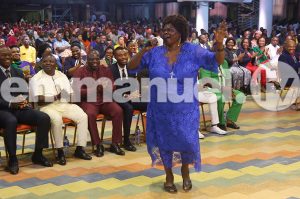 As the prayers progressed, in Jesus’ name, Anne fell under the anointing as Prophet Chris declared her free from suffering. “Oh, my God! Now I’m free!” Anne had exclaimed in tears after she returned to her feet. Last Sunday, Anne told the church that she had started following Emmanuel TV in 2016 and had been practising forgiveness,as taught by Prophet TB Joshua. She said she had immediately felt light when she stood up after the anointed touch, and that her daughter had also fallen under the anointing back home in South Sudan. Anne advised people to expect God’s touch wherever they are, since nothing is impossible for Him.

“MY STRENGTH AND ‘FRIENDS’ FAILED ME BUT GOD PROMOTED ME!” SAYS TOP CIVIL SERVANT

As at 2013, Nigerian civil servant Mr Oguoma Mbanugo was a Chief Education Officer in the Nigeria Police Force Education. By 2016, he was due for promotion to level 15 as Assistant Director. He put in what he believed was his very best, yet he failed the promotion examination. 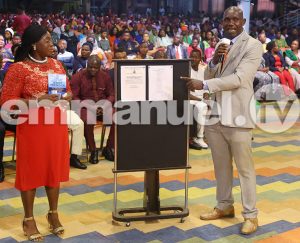 Much to his chagrin, his subordinates overtook him and he began to feel frustrated, mindful of his retirement date. His strength had failed him. In 2017, he tried the examination again.

He was advised to seek out somebody who could help him influence the process. He did – yet he got no promotion. His ‘friends’ had failed him. Mr Oguoma Mbanugo then ran to The SCOAN and received the New Morning Water, after prayers from Prophet T.B. Joshua. Before writing the examination again in 2018, he ministered the Morning Water and surprisingly, among close to 200 people, Oguoma emerged as the best candidate! He and his wife Prisca advised people to believe in God.

MATTHEW MOVES FROM DRUGS TO JESUS!

Last Sunday, alongside his younger brother and parents, Matthew Wilson testified about his deliverance from drug addiction. Constant use of marijuana and nicotine had led the young American to drop out of school. He had also become disrespectful and nasty towards his family, even as he constantly nursed negative thoughts and isolated himself. 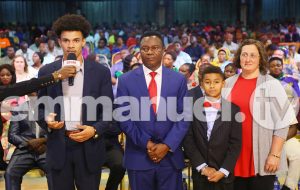 Owing to the effects of the drugs, he began to feel his throat close up and his chest tighten, leading to anxiety and depression. Unable to stand the situation anymore, Matthew’s dad decided that the family should visit The SCOAN for prayers – and they did so two Sundays ago. After prayers in the mighty name of Jesus Christ, Prophet Chris pronounced Matthew free from the spirit of addiction. “I felt free. 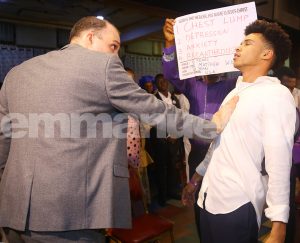 I want to thank God for delivering me,” Matthew said about the effect of the prayer. Confirming that Matthew had indeed become “a changed person”, his family testified on Sunday that he is now focused on reading the Bible and relating with family. Matthew advised the youth to turn to God and to avoid drugs.

“IT WAS FAVOUR UPON FAVOUR FOR ME!” SAYS MAN WHO MOVED ZERO TO HERO

As a child, Taniuanashe Chadoka had dreams of becoming a pilot. Because dreams are easier to have than to realise, Taniuanashe had almost given up on his ambitions when there seemed to be no way. For seven years, he faced extreme suffering in the United Kingdom, where he had thought he would easily fulfill his ambition. With no valid papers, he managed to get only menial jobs that made his life miserable and forced him to live like a pauper. One day,  Taniuanashe came across Emmanuel TV on the Internet. After watching numerous sermons, healings and deliverances, his faith rose just as his love for God soared. One night, he dreamt of Prophet T.B. Joshua asking him to follow him. As the man of God took him into the church, Taniuanashe woke up. A few days later, he decided he would leave the UK and go to The SCOAN. 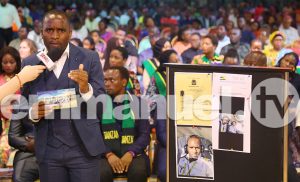 Resisting discouragement from people, he came to The SCOAN and received prayers and the Good Morning sticker. Back home in Zimbabwe, Taniuanashe started a poultry business upon which the right hand of God fell. The business did so well that the young man soon came into money. Then he rekindled his childhood ambition after visiting his family in South Africa. He enrolled for pilot’s training in a Johannesburg flight school. After the first stage of training, Taniuanashe received help and favour from known and unknown people and he managed to finish the course in record time. 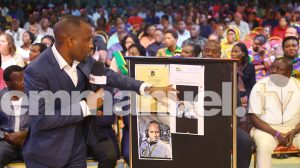 In fact, five months before he finished, Taniuanashe had been offered a job as a flight instructor at the training school. As such, he became the school’s first African flight instructor since its establishment in 1981. Along the line, Taniuanashe also got a request to come to Tanzania for training as a commercial pilot. Before going there, he prayed for God’s favour, making the Good Morning sticker his point of contact. To God’s glory, he got the job – and he is now living his dream! Taniuanashe advised people to follow their dream and to put a demand on the anointing.

HEALED OF ANUS CANCER OF 15 YEARS

For 15 years, 37-year-old Mr Eric Tovor had anus cancer, which was a constant source of pain and embarrassment. To defecate, he had to use a special drug. Moreover, he could not wear bright colours, which would have easily exposed his frequently bloody behind. As the pain kept increasing, Eric began taking an overdose of the drug. Always wary of using the toilet, he would starve himself for days. 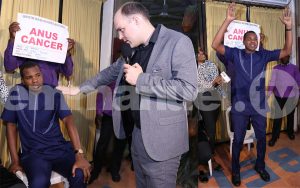 After exploring numerous avenues for a solution, he decided to visit The SCOAN two Sundays ago. Testifying last Sunday, Eric said that as the man of God approached him for prayers, he began to feel persistent punching in his anus. After a touch from the prophet, Eric felt his pain disappear altogether. 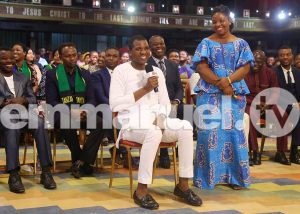 He said he now spends only few minutes in the restroom – instead of the over two hours it used to take him. Eric’ wife said her husband now eats not only three times a day but also adds meat to his meals. Eric advised people to take whatever challenge they have to Jesus Christ.