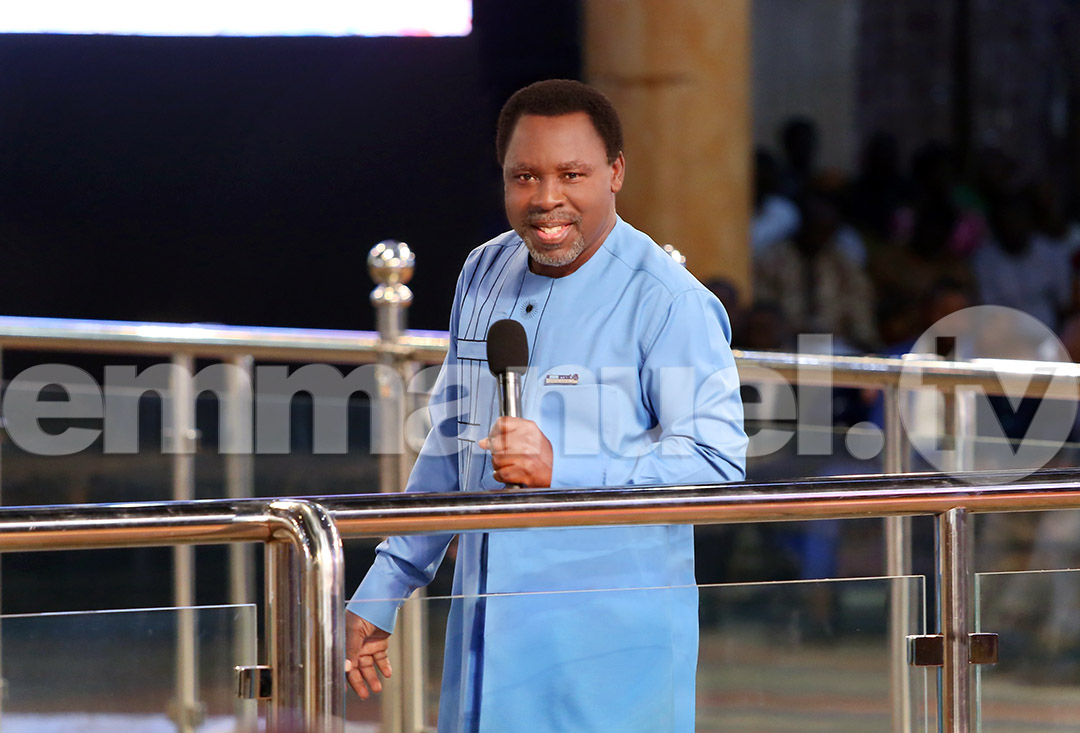 The SCOAN Choir began on a note of brokenness, asking the Lord to fill theirs and the people’s emptiness with His love, joy and peace to a point of overflow. They also asked the Son of David to have mercy on them and the congregants, even as they called for His unceasing favour. Once the Choir finished welcoming the Holy Spirit into “The Arena of Liberty”, worshippers began to witness God’s power ministering to their diverse situations.

In a very frank message titled FAITH OR BELIEF MEANS TRUST, Prophet TB Joshua addressed four key questions about faith. First, he asked, “How do we live out our faith?” For answer, he quoted Hebrews 11:1 and explained that living out our faith means keeping the focus on God no matter our situation or challenges, believing that He is working out the answer. Second, he asked, “What is faith?” He answered by noting that faith is about being able to make heart contact with God, not about outward show that comes from mere sense experience. In other words, faith is believing even without having seen. For the third question, he asked, “How is belief formed and strengthened?” Reiterating the idea that faith or belief means trust in God, he said that faith “is formed and strengthened when we hear the truth of God’s Word,”.

Finally, he asked, “How does faith grow?” Prophet TB Joshua answered by stating that faith grows when a Christian diligently seeks the Lord, studying to show himself or herself approved by God. He said that a Christian should engage with the Bible as the mind of God, rather than as mere literature. More importantly, he said, a Christian should read the Bible and pray with forgiveness in their heart in order to activate the potency in God’s promises. Anchoring the entire message on 2 Corinthians 5:7 – “For we walk by faith, not by sight” – Prophet TB Joshua assured the church, “True Christians, true believers, never run out of faith when life becomes difficult. The same faith that brought them to Jesus, will keep them.”

“SINCE THEN, IT HAS BEEN WELL WITH ME!” – WOMAN HEALED OF DIFFICULTY IN WALKING

Last week, 64-year-old Mrs Florence Wami received God’s touch at The SCOAN. For 15 years, the Rivers State indigene had suffered from difficulty in walking due to lumbar spondylosis and arthritis of both knees. Constantly, she felt pains all over her body, especially her waist and knees, which had become deformed. Searching for a solution, she had visited hospitals in both Rivers and Lagos states but all to no avail. Upon discovering Emmanuel TV, she became sensitised to God’s healing power. Two weeks ago, she attended The SCOAN Live Sunday Service. There, she got a chance to pray on the “Mountain of Prayer”, in the mighty name of Jesus. “Since then,” she said, “it has been well with me.”  No longer using her lumbar corset and knee braces, Florence glorified God’s name as she testified about her healing. Demonstrating her healing to the church, she advised people to believe in God’s healing power.

“I DIDN’T COME HERE TO MAKE A MOVIE!” – WOMAN HEALED OF A STIFF NECK

“Man of God, help me. I have stiff neck due to cervical spondylosis. My right hand cannot work and I cannot sleep. I sleep seated.” Those were the words of the Zambian Mrs Judith Nabanda, two Sundays ago, as she explained her problems to Prophet T.B. Joshua, who then instructed that she be assisted to climb on The SCOAN Altar for prayers. After a heart contact with God there, Mrs Nabanda took off her neck collar and began to relish her newfound freedom. Testifying in church, the inventory specialist said her problem had begun in August 2019, when she suddenly woke up with a sharp, stabbing pain in her neck. At the hospital, doctors found that her neck nerves were damaged. Three days later, three of her fingers became numb. She took further tests and the doctors found that her discs had moved out of shape, hence the need for surgery. Wary of the surgery, Judith asked the doctors to give her one week. While watching Emmanuel TV, she decided to visit The SCOAN for prayers. At “The Arena of Liberty,” she got a chance to pray on the “Mountain of Prayer,” where she received her perfect healing. She said she felt a cold sensation on her neck, just as something seemed to have gone out from behind her neck. Indeed, it was instantaneous surgery for Judith. Now, she sleeps peacefully, feels no pain and can write and hold things with her fingers – things she could not do before. Urging people not to disparage the healings taking place at The SCOAN, Judith advised people to look up to Jesus for help.

Bewilderment! Astonishment! Excitement! Those and several similar emotions rang out in Mr Yaw Alexander’s spontaneous outbursts two Sundays ago as he bounced on his backside on The SCOAN Altar. Beside himself with joy for several minutes, the Ghanaian university lecturer and former government official, remained excited and voluble.

Still struggling to contain his excitement, Yaw declaimed to the audience as he kept bouncing on his buttocks: “This is unbelievable! I can’t believe it, because I couldn’t sit like this!”

It was in that condition that Yaw had attended The SCOAN Live Sunday Service a fortnight ago and got the chance to pray on the “Mountain of Prayer”. He said that as he started praying there, “something just melted within my anus – everything just vanished!” Then, in reference to himself, Yaw laugh-cried in ecstasy, “Can this person be going for surgery? Look at the surgery man!”

On Sunday, Yaw returned to church with his family comprising his wife, a daughter and two sons. His testimony was even more dramatic than it had been on the day of his healing, as he gestured melodramatically and spiced up his testimony with Pidgin English expressions. He told of how his condition had hampered his duties as a lecturer, of how he had declined the suggestion of an operation by four prominent Ghanaian surgeons and of how he had prayed with an empty bottle of the New Morning Water.

Yaw also told the church of a dream in which the Spirit of God, through the image of Prophet T.B. Joshua, rescued him from the grips of evil marine forces. When he woke up, he told his wife, “I am no more going for surgery.” Then he asked his family to prepare for The SCOAN.

And the rest is now history!

Yaw ended his testimony by advising people to stop the campaign of calumny against God’s servant Prophet T.B. Joshua. His wife advised people to accept that the power of God is upon The SCOAN.

For one and a half years, 22-year-old Mr Bamidele Adesina had a stiff neck due to cervical spondylosis, which also caused his eyes to ache. Unable to get relief from his neck collar, the young man sought a divine solution at The SCOAN two Sundays ago. After rolling upon the altar while making a heart contact with God, Bamidele unhooked his neck collar and jumped into the air a few times, turning his neck left and right to confirm his healing. In his testimony on Sunday, he said he had suddenly felt a cold sensation run through him while he called upon the Son of David on the “Mountain of Prayer”. “Now I can sleep well and no longer feel pains,” he told the church. He advised people to believe in God’s ability to answer prayers. Bamidele’s younger brother, Alfred added that family members now sleep all night without any worry about Bamidele. Alfred said, “I now believe there is a God in Heaven.”

WOMAN HEALED OF DIFFICULTY IN WALKING, SON CURED OF BED-WETTING

Five years ago, Mrs Vida Konlan, then aged 33, had come to The SCOAN with the problem of difficulty in walking due to a spinal cord injury. Relying on a lumbar corset and knee bandage, the seamstress could neither do her job nor care for her three children, as she had chronic headaches and back pain. Unable to afford further medical costs, the family had decided that Vida should visit The SCOAN for prayers. After prayers in the mighty name of Jesus Christ, Prophet T.B. Joshua gestured to Vida to get up and walk. And she did, to the glory of the Lord! Last Sunday, Vida was in church to testify about the permanence of her healing since then, even as she disclosed that she now has a fourth child. Earlier, on September 27, 2019, she had attended The Special Living Water Service, together with her son, who had the problem of bed-wetting. Her son also testified of his deliverance from the spirit of bed-wetting after beseeching God on the “Mountain of Prayer”. Vida and her son advised people to believe that God can solve all their problems.

Following The Special Living Water Service of September 27, 2019, as well as other “Mountain of Prayer” sessions that have been held at The SCOAN in the past few weeks, we wish to encourage you to send in your own testimonies as well. May your faith be lifted to another level in Jesus’ name.