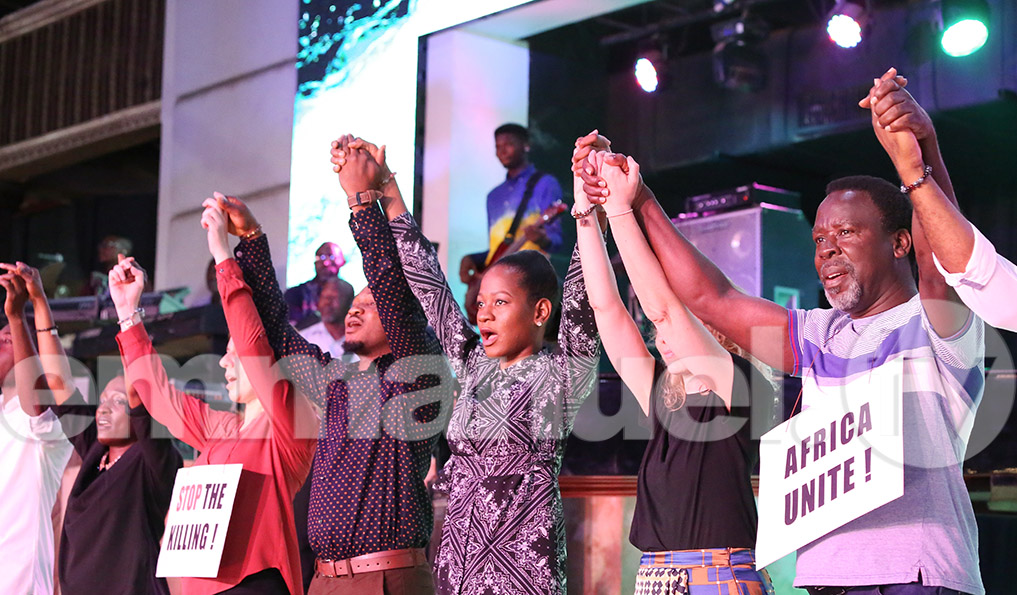 Under the leading of the Holy Spirit, Prophet T.B. Joshua appeared on the stage with The SCOAN Choir on Sunday the 8th of September 2019. He decided not to talk but to express his feelings and those of like-minded Africans and the world at large through a special composition urging Africa to unite in love and solidarity. Let us stop the killings. Let us welcome one another. “Africa, Unite!”

Let these words resonate in your heart and in your prayers as you join Prophet T.B. Joshua in prayer for Africa.

“There is neither Jew nor Gentile, neither slave nor free, nor is there male and female, for you are all one in Christ Jesus” (Galatians 3:28). As a Christian, you are a member of the body of Christ. Christ is the Head and the common centre of our unity. All His members are dear to Him – big or small, minute or noble. This truth was demonstrated live on Emmanuel TV as people from different races, different nations, different backgrounds came forward to testify to how the unifying power of Christ Jesus set them free – spirit, soul and body.

FROM ISRAEL – HEALED OF DIFFICULTY IN BREATHING
Marian Nwoye, an Israeli woman born and raised in Nazareth, grew up with the debilitating health challenge of asthma. She found it difficult to socialise or participate in sports as a young child. As she grew older, the music career she built and the reputation she gained as a well-known soloist in Israeli social and religious gatherings was greatly affected. She was placed on various medication but received no relief and was then sentenced to the use of a breathing machine. After her marriage, the problem became something of a nightmare for her husband, who had to ensure every night that she did not fall asleep without her breathing machine.

Discovering Emmanuel TV on YouTube, she began watching with rapt attention. When she heard that Prophet T.B. Joshua was not only coming to hold a meeting in Israel but directly in her hometown of Nazareth, she believed Jesus of Nazareth would set her free. In the Amphitheatre of Mount Precipice, Prophet T.B Joshua prayed for her in Jesus’ name and her lungs instantly cleared and she could breathe normally, without pain. Since that day, she testified that she has stopped using the breathing machine and can now participate in all of her desired activities.

Mr Nwoye further testified that apart from his wife’s healing, he also received healing from a severe spinal problem and he is now able to live without the aid of a lumbar corset. The elated couple advised all to have faith in God and give their all to Him.

FROM BOTSWANA – DELIVERED FROM A STRANGE ADDICTION
A strange encounter at the age of 10 led Miss Keamogetse Shirly on a destructive journey of addiction. While preparing to eat one afternoon, a man entered the room where she was and swallowed a piece of raw meat in front of her, winked and said, “This is how we do it”.

From that instant, Miss Shirly was addicted. She began to crave raw meat, claiming it tasted sweet like chocolate and that she savoured the smell of the blood. She ate it in secret anywhere she could get it. Soon after this addiction took hold of her, she began to experience a snake-like movement in her stomach, coupled with severe health crises and stagnation in every stage of her life. After 19 years of addiction, she began watching Emmanuel TV and witnessed the deliverance of others who were also held in the grip of addictions. She decided to make her way to The SCOAN to seek her deliverance. As she received prayer at The SCOAN, an evil spirit within her began to manifest and she was set free. In that very moment she took up the raw meat one more time, only to discover that the smell repelled her and the taste to her was now bitter. She went to the restroom and urinated poisonous substances that had been deposited in her system.

She could not hold back tears of joy as she testified of the Lord’s goodness in her life. She said she now finds cooked meat extremely appetizing and she no longer craves raw meat. Her system has come back to normal and she is no longer in pain. The curse of addiction was broken with just a touch from Jesus Christ.

FROM NIGERIA – FAILED VISION PERFECTED
Miss Sophia Enebeli, a vibrant young lady from Abuja, Nigeria, came to The SCOAN Living Water Service wearing glasses “meant for a 90 year old” she explained. She had battled a severe eye problem since she was a child, beginning in primary school when she began to complain that she was not able to see things written on the board. Her sight worsened to the point she could not identify people who entered the room or who came to stand next to her, even if they were close family members whom she knew well.

The optometrist was shocked when he first examined her and prescribed very thick-lensed glasses. These she wore for years until she came to The SCOAN Living Water Service last Monday. After praying on The SCOAN Altar, she collected the Living Water and immediately removed the glasses to pour the Living Water in her eyes. She blinked, looked around and suddenly began to shout, “I can see!” Rushing down from the altar, she began to point to people in the congregation, describing from afar what they looked like and what they were wearing. She then took a sermon and began to read from it, word from word. All of this was done with the glasses no longer over her eyes but held tightly in her hand. Calling on the congregation to join her in thanking God, she stated, “I’m so happy that God has healed me!”

She testified on Sunday that it had been one week since she had received her healing and she is truly liberated in Christ Jesus. Mrs Ebere Hart, Sophia’s mother, corroborated the testimony, adding that she no longer has to guide her daughter when she goes out as Sophia can see everything on the road ahead of her and is no longer in need of her constant supervision. She advised everyone to trust and submit totally to God for only God can restore sight to the blind.

CHRONIC BLEEDING AND BEDWETTING END WITH A WORD OF PROPHECY

Intimated by the Holy Spirit last Sunday, Prophet T.B. Joshua prophesied that there was a woman in the congregation bleeding, stating that something had burst out from her and declaring that the bleeding had stopped. Mrs Jessie Esinam from Ghana raced out to confirm the prophecy, saying, “It was as if a tap had been turned on in my body”. She confirmed that she had been bleeding for several years non-stop and that as the man of God spoke those prophetic words, she felt the blood rushing out. Making her way to the restroom, she was ecstatic to discover that after the burst of blood, all bleeding had stopped. For the past one week, she has been completely dry, a testament to the transforming power of Christ’s Word.

The Esinam family further testified that not only did the mother’s chronic bleeding stop with that prophetic word but the son’s continual bedwetting also came to an abrupt end. The young Esinam testified that he had been wetting the bed since he was a young child but for the past week, he had woken up each morning to a clean and dry bed. Both mother and son glorified God this morning in front of a packed congregation as the father of the house, Mr Esinam, beamed with joy at the deliverance Christ had wrought in his family.

ON THE MOVE AGAIN – HEALED OF CHRONIC ARTHRITIS

Movement had become a battle for Mrs Queen Ideozu from Rivers, Nigeria as severe chronic arthritis took over her knees and her life. Slowly and increasingly, she found it painful to lie down on or get up from her bed each night and morning. Once lying down, she found it almost impossible to sleep as she constantly felt something poking her. It got to a point she could barely walk and occasionally had to crawl to the restroom. Her business and career began to suffer as she suffered to go to work and attend meetings. She took various treatments without remedy and was recommended a kneecap replacement surgery by the doctors, which she flatly refused. When she had enough, she decided it was time for God to take over. She attended last weeks’ Living Water Service and prayed on The SCOAN Altar.

She testified, “As I was walking towards the mountain on the altar, I started feeling something in my knees”. The entire congregation witnessed as she stood up spritely from the top of the altar and began to dance and run with delight. One week later, she was still dancing as she could not hold back her joy at Christ’s perfect healing. Shouting a great big hallelujah from the bottom of her heart as she concluded her testimony, she advised people to hold on to God, who alone wields all power.

Before another could come to testify, the ministers of God took to the altar and began to minister Christ’s power of healing, deliverance and salvation. As chains were broken and bonds loosed throughout the auditorium, a rapturous outpouring of praise was lifted to God Almighty – He “…who was, and is, and is to come” (Revelation 4:8). And our testimonies continue.