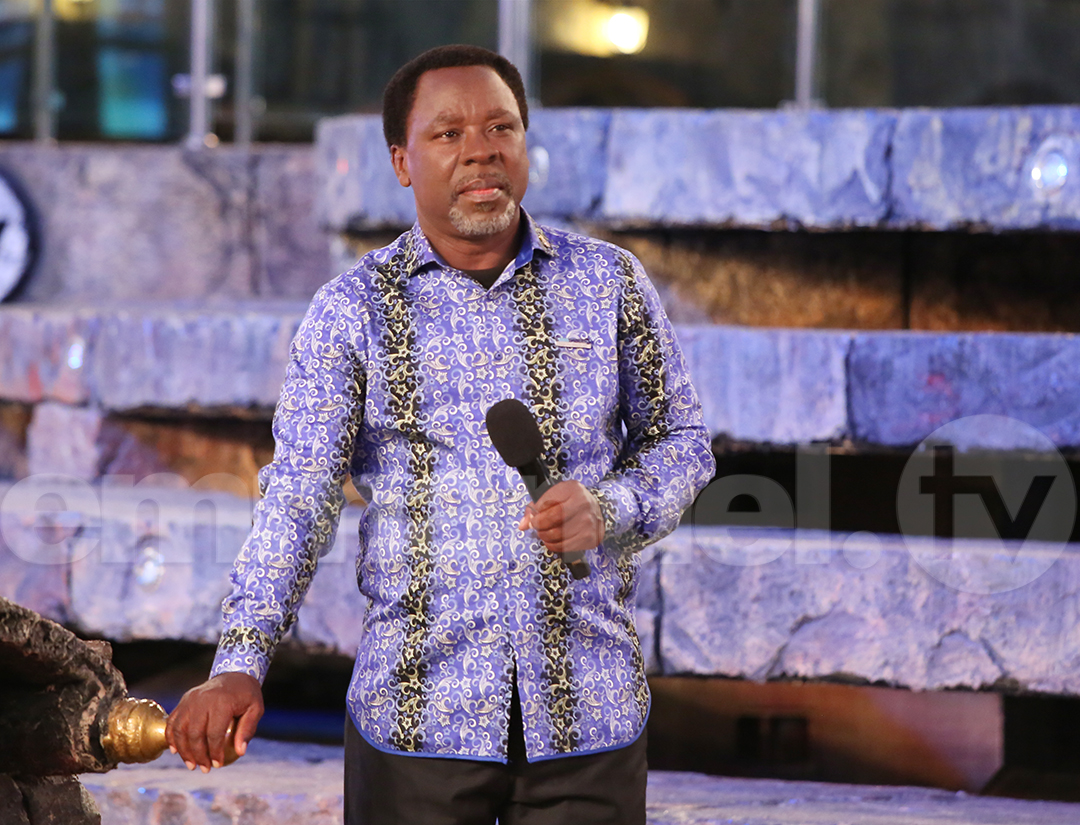 Our hearts were drawn closer to the Spirit of God more and more as the words of this anointed song, composed by Prophet T.B. Joshua, rose from the lips of The SCOAN Congregation and Emmanuel TV Viewers. As they joined together from around the world, honouring God and surrendering all to Him, the Spirit of God fell afresh and chains of bondage were disconnected, evil spirits manifested and were cast out and the seed of sickness and disease was flushed out.

In this anointed atmosphere, Prophetess Yinka took to the altar and delivered an encouraging message titled, “YOUR SETBACK IS FOR A COMEBACK”. After identifying two categories of people – those who choose to wallow in self-pity when facing hard times and those who choose not to be overwhelmed by their trials and setbacks – she likened our challenges to temporary stops on the journey to our divine destiny. She demonstrated how many have allowed their setback to rob them of productivity and the joy of life, failing to discover that their challenge is a tonic to their success in life. In her words, “Whatever challenges you may be passing through, I want you to know that it is not a full stop but a comma in the sentence of life”.

With this uplifting word, she moved to the Prayer Line and began to minister God’s healing touch to those afflicted with various sicknesses and diseases. Stretching forth her right hand in the power of God, she proclaimed healing and deliverance, in Jesus’ name and Christ’s result followed – the lame walked, the bound were loosed and the oppressed were set free. Prophet Racine and Prophet Chris joined her and they began to move through the length and width of The SCOAN Auditorium, ministering in the power of the Holy Spirit.

Heaven continued to rain down as Prophet T.B. Joshua stepped onto The SCOAN Altar. Reinforcing Prophetess Yinka’s message, Prophet T.B. Joshua exhorted the church to “HONOUR GOD IN TRIALS”. As he read from James 1:2-4, 2 Corinthians 12:7 and Job 23:10, he pinpointed the essence of trials in the life of the Christian. Describing trials and challenges in health, career, family and other areas of life as tests of faith that help us to mature spiritually, he urged Christians to not murmur, complain or lament when problems come but to use such occasions to grow their relationship with God. “Don’t try to escape them; they are tests to mature you.” He said they should honour God before men by adopting a cheerful attitude in good and hard times for “As Christians, trials, affliction and temptation are meant to shake our faith and nothing more”. He concluded with this bold proclamation: “After this message, I believe, you will be bold enough to face your challenges with joy and hope”.

Stepping then into a time of prayer, Prophet T.B. Joshua ministered the delivering power of Jesus Christ over individuals, nations and the world at large, ministering in prayer and prophecy. Individuals rushed forward to confirm the prophetic messages and share their testimonies of how God had answered their prayer with a miracle.

AN END TO EIGHT MONTHS OF BLOODY MISERY

Imagine being unable to share a hearty laugh. Imagine being condemned to wearing only dark colours when you are a lover of bright colours. Imagine not being able to take soft, fizzy drinks even when your taste buds badly crave them. Imagine having to swallow drugs upon drugs while doctors struggle to discover your problem. Imagine constantly feeling weak and dizzy due to constant menstruation for eight months! Well, that was the story of Miss Peace Ewelu, a security officer from Cross River, Nigeria – until a fortnight ago when a prophecy located her at The SCOAN. “There is a lady there – right now you are bleeding as I am talking. Please come out.” Those were the words of the Holy Spirit speaking through Prophet T.B. Joshua during The SCOAN Sunday Mass Prayer. Having identified herself and shown her medical documents, Peace went to the restroom to confirm the bleeding. Peace said that by the time of the prophecy on Sunday, she had changed her pad three times already. But that was the end of her problem, as the prophecy had ended her suffering. She then wiped herself with new tissue paper and no longer was she bloody. Testifying on Sunday, Peace said, “At times I shed tears – maybe it’s tears of joy,” speaking about her freedom from unceasing bleeding. “In God’s own time He makes all things beautiful,” she advised those seeking divine help.

FOR MOTHER AND DAUGHTER, IT’S FREEDOM FROM ALL FORMS OF ARTHRITIS!

In June 2019, on the insistence of her mother, Ms Fiona Barretto attended The Emmanuel TV UK Revival. She was one of the hundreds of people who received healing, deliverance and salvation at the well-attended event. Diagnosed in 2011 of rheumatoid arthritis, Fiona also had fibroids, asthma and osteoporosis. After prayers from the woman of God, Fiona parted ways with her cocktail of ailments, crying, “Thank You, Jesus!” She could now cook and drive and do so many other things, including helping her visiting ailing mother at home in Buffalo, New York, USA. Encouraged by the miracle, Ms Fiona made arrangements and brought her 80-year-old mother, Ms Ermelinda Barretto to The SCOAN for her own healing. She had had osteoarthritis of the knees since turning 60 years old and had been unable to move without her special socks and walker. After the prayers, however, the Tanzania resident can now walk unaided, bathe herself and use the toilet on her own. The doubly blessed mother and daughter advised people to forgive their offenders while praying to God in faith.

A CIVIL ENGINEER GETS HIS NECK BACK!

A once well-off civil engineer, 43-year-old Solomon Odang had suffered pain from a stiff neck for 12 years. The origin of his problem was a fall from a tree when he was 10 years old. Over the years the effects of the fall increased to the point Solomon could barely function at his job. He patronised various spiritualists and medical doctors but even with treatment was advised not to lift heavy objects, including carrying his children. Despite the constant use of a neck collar, he began to lose sensation and strength in his limbs. A doctor friend frightened him when he said, “You might end up with a stroke”. No longer able to fend for his family, Solomon once thought of suicide. A friend assisted his visit two weeks ago to The SCOAN where he received instant solution from Jesus Christ. “I felt a sensation of freedom and peace as the man of God prayed for me,” Solomon testified last Sunday. He then demonstrated his perfect healing by turning his neck and bending his frame to different degrees. “God’s mercy will bring you freedom,” he advised his listeners.

“In the name of Jesus Christ, the passage is open!” So declared Prophet T.B. Joshua as he prayed for Mrs Ngozi Nwachukwu during The SCOAN Sunday Service of two weeks ago. Mrs Ngozi had been unable to have intimacy with her husband since a miscarriage the previous year as her vaginal muscles kept contracting, making even urination painful. Any night her husband tried to meet with her, ‘offended’ evil spirits would later violate her in her dreams. “I even took traditional drugs, yet no solution,” Ngozi told the church on Sunday. Her husband then suggested The SCOAN. Having watched Emmanuel TV before, Mrs Ngozi believed firmly that her very presence on The SCOAN grounds would end her problem. She was delighted to be located through prophecy. As instructed in the prophecy by the Prophet, she went to the restroom and urinated an unusual coloured liquid. She later testified that she and her husband were able to meet successfully after the prophecy and are now a happy couple. “Hope in God and seek His face,” Mr Nwachukwu advised couples around the world.

It was easy to tell that a very deep and positive impression had been made on Pastor Samson Nyangu, who had come all the way from Zambia with a severe liver problem that seriously affected his health and ministry. He had lost his appetite, felt pain in his stomach and experienced irritation at night. He could not carry out his pastoral duties by visiting his members for counselling. With his medication having failed to give him any relief, Pastor Nyangu visited The SCOAN two weeks ago for prayers. As Prophet T.B. Joshua declared, “You devil, remove your hand from my people!” the pastor felt something snap in his stomach and he started vomiting. What came out was a thick mass of blood and poisonous substances – the evidence of God’s right hand in the pastor’s life. It was in memory of that moment that he sang thus: God of T.B. Joshua/He has done it for me/He will do it for you/He will do it for us/I came with sorrow/With tears of sorrow/I am going back to Zambia/With tears of joy. He advised ministers of the Gospel to humble themselves and seek help from the Lord.

Two weeks ago the delivering power of Jesus Christ manifested across three generations of one family as two teenage children, their mother and grandmother were set free from the curse of bed-wetting. Mrs Jenette Yula, a Cameroonian based in Canada, had visited The SCOAN for prayers with her kids. As the man of God laid hands on her and her children, a demon within her reacted forcefully, exposing its evil plan of family destruction, before being finally subdued. That night, all the beds stayed dry as grandmother, mother and children saw confirmation of their deliverance. On Sunday, when they returned to The SCOAN, they glorified God for rescuing them from the satanic bondage that had been shaming them. Mrs Jenette testified that while the demon held sway, her husband refused to share a room with her and she was unable to sleep over at friends’ homes for fear of wetting their bed. The demon, which used to appear as a spirit husband in many forms, also prevented Jenette from receiving favour and promotion. Having experienced God’s awesomeness, she advised people to have faith in God and keep watching Emmanuel TV.