FORGIVENESS IS NOT AN OPTION - The Synagogue, Church Of All Nations - SCOAN - Prophet T.B. Joshua (General Overseer) Skip to content 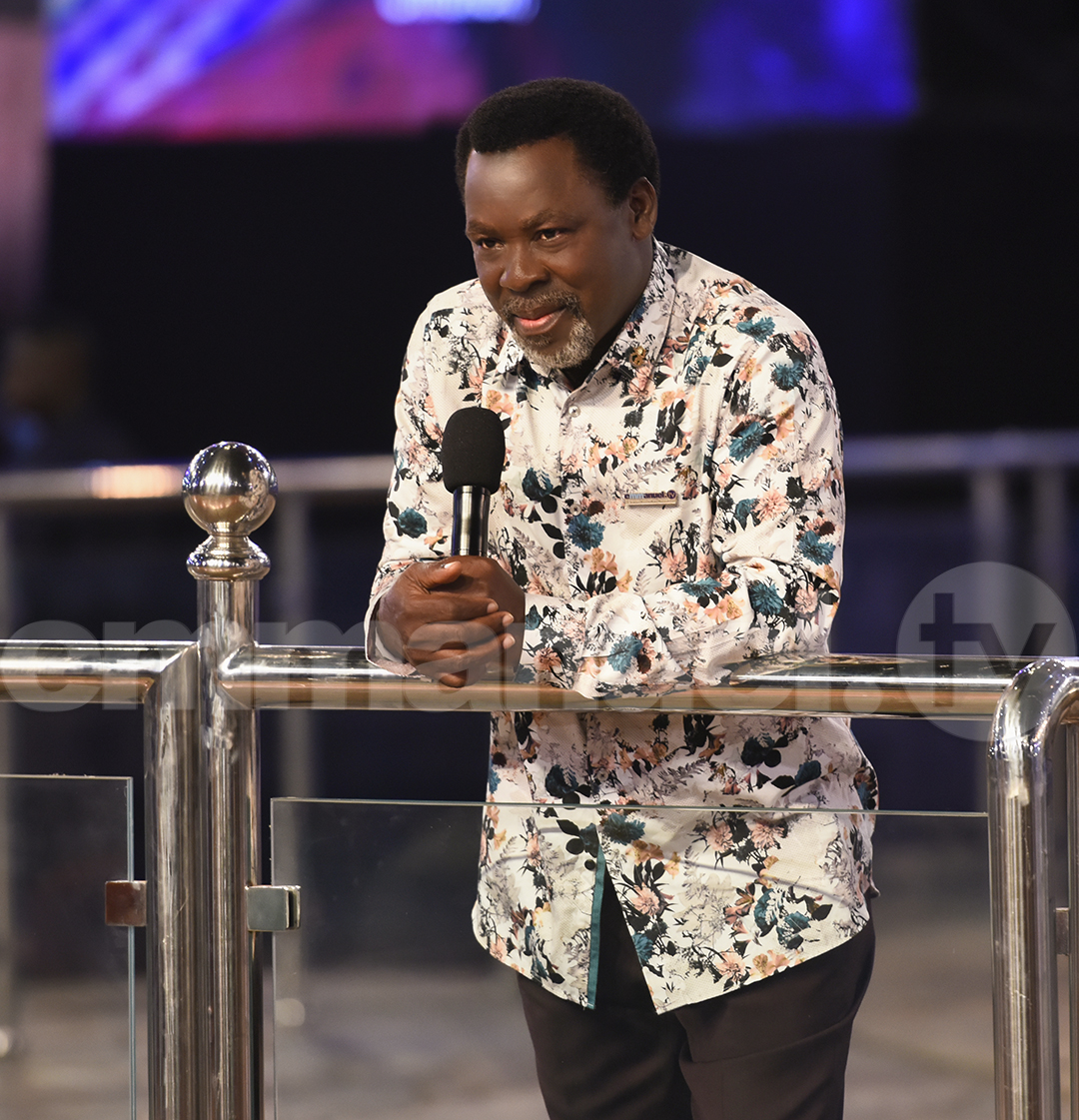 It was a feisty singing session on Sunday as The SCOAN Choir gave a virtuoso performance that got worshippers dancing with holy abandon, swaying to a medley of worship songs with inspired rhythms, melodies and lyrics.
Prophet T.B. Joshua was in a very expansive mood when he joined the congregation on Sunday. He delivered a message titled FORGIVENESS IS NOT AN OPTION. Reading from Matthew 18:21-22 and Colossians 3:13-14, he exhorted the people yet again on the need to let go of offence. He stressed that it was important to identify the barriers between oneself and God. He also said that it was necessary to maintain the essentials of life set on the believer’s table by properly handling the matter of whom we have offended and who has offended us. Forgiveness, he insisted, is the source to the freedom that God desires for us, regardless of whether we are the offender or the offended. He noted that God simply commands us to forgive and that “Forgiveness is not an option,” he concluded. After his ministration, he prayed with the people and prophesied on their cases as led by the Holy Spirit.

Prophet Chris gave a message titled DON’T GET STUCK IN A STOPOVER, taking his readings from Genesis 37, 39-45 as well as 2 Corinthians 4:17. He likened the challenges faced by Christians to transit points meant to connect them with their destinies, and advised them not to get stuck there. He told the worshippers that as Christians, whatever they might be passing through “is part of the events arranged and designed by God to usher you into your destiny.” He therefore assured them thus: “If you know this truth…, you will not get carried away by your challenges, you will not get so caught up in your challenges, you will not allow your situation, your challenges, your troubles to mislead you or deceive you.”

BOY RESCUED FROM BRINK OF BLINDNESS

Last week, Dr Arthur Nwashindi and his wife Mercy were at The SCOAN to testify of the Lord’s goodness in the life of their little boy, Arthur-Prince, who had been diagnosed with glaucoma, a condition that could lead to total blindness. Their child had been complaining about short-sightedness and occasional loss of vision. Disturbed, the Nwashindis booked a Monday appointment with a surgeon in Lagos. However, they had stopped over at The SCOAN for prayers the Sunday before. After a touch by Prophet T.B. Joshua, the following day they took the boy to see the doctor, but not before they had been queried by their son on the necessity of honouring the doctor’s appointment. To cut the long story short, after comprehensive tests, the specialist issued a clean bill of health for Arthur-Prince. Thanking God for the miracle, he said, “Now I can see clearly.” “There is no impossibility with God,” Dr Nwashindi said. On her part, Mrs Nwashindi said, “We should solely depend on God, for He has the final say.

Two weeks ago, Mr Emmanuel Semadio had come to The SCOAN with the problem of a stiff neck due to cervical spondylosis and cervical spasms. An administrative officer in managerial capacity, he could not do his work effectively owing to severely limited mobility. Despite his neck collar and drugs, he had been unable to free himself from pain. After prayers in the name of Jesus Christ, however, he got his perfect healing. “The power of God touched me,” he testified on Sunday, turning his neck to demonstrate his healing. “Run to Jesus,” he advised people.

TRIPLE FIBROIDS FLUSHED OUT AFTER PROPHECY

“There is a woman that’s having triple fibroids; right now it’s coming out,” so prophesied Prophet T.B. Joshua during the Mass Prayer two Sundays ago. The prophecy had been for Mrs Augustine Aziagbenyo, a Ghanaian, who had identified herself after the man of God spoke. Afterwards, she went to the restroom and, to God be the glory, the fibroids had indeed been flushed out of her system. “God’s time is the best,” she told the church. Also testifying on Sunday was her husband, who also urged people to trust in God.

Mr Andrew Akhabue, a Lagos resident, had been travelling when his driver found that the car radiator had overheated. Joining the driver to check the engine, he had boiling water splash over him as the radiator burst suddenly. After weeks of medical attention, Mr Akhabue’s injuries remained very painful and he could not walk properly. It was in this condition that he visited The SCOAN three weeks ago. As Prophetess Yinka prayed for him, in Jesus’ name, Mr Akhabue felt a surge of divine heat in his burnt thighs. Moans of pain escaped his lips but those were going to be the last time he would feel the pains. “After a while, there was something like cold water poured on that spot,” he said of his experience after the prayer. Within days, the wounds on his thigh dried up and Mr Akhabue no longer feels pain and can walk perfectly. To God be the glory!

It was clear that these Colombian sisters were besides themselves with joy as they testified on Sunday. The Monday before, they had attended The SCOAN Living Water Service – and that had marked the end to 25 years of gastritis and fibromyalgia for Maria Mosquera and to insomnia and hypertension for Betty Murillo. Once Maria took the Living Water, the power of God struck at the root cause of her problems and she vomited a large amount of a blackish substance. “I felt light afterwards,” she reported. Also gone was the severe pain that had prevented her from lifting her right shoulder. On her part, Betty can now sleep like a baby, with her insomnia and hypertension gone. The Switzerland residents advised people to have faith in God and watch Emmanuel TV.

WIND OF DEAFNESS BLOWN AWAY!

Four years ago, Mr Daniel Lumisa, a Congolese special-needs teacher based in Canada, had been playing a game with his students when an ill wind suddenly blew into his left ear. By the time the eerie sensation was over, his students’ voices had become like a distant echo. Soonafter, he discovered he had totally lost his hearing. At work, they granted him three months of compassionate leave. Then he returned to the doctors, who told him he would need hearing aids. After six months, he returned to work but they still insisted he would not be able to teach. As his treatment progressed, so did his condition worsen. Mr Lumisa then took his case to God, visiting The Arena of Liberty two weeks ago and receiving prayers in the mighty name of Jesus Christ. Since his healing, he has been able to hear clearly without his hearing aids. He advised people to seek Jesus Christ for their healing.

After her marriage, Mrs Happiness Chinweoke had been unable to fall pregnant due to blockage of the fallopian tubes. Instead of panicking at the doctors’ diagnosis, she continued to pray along with Prophet T.B. Joshua on Emmanuel TV, even buying baby clothes in faith. During a Sunday service at The SCOAN, Prophet T.B. Joshua prophesied about her condition: “There is a woman under the gallery. There is something inside you; it is not fibroid but it has burst. It is coming out in the form of bleeding”. The man of God then asked her to go and check herself in the restroom. She did so after identifying herself before the congregation and indeed, blood substances had come out of her, just as the man of God had prophesied.  In no time, she fell pregnant. On Sunday, she came to testify in the company of her husband. The couple advised people to have faith in God.

“LORD, PLEASE, JUST BRING MY KIDS FOR ME!”

She was 14 years old when the spirit of lust and rebellion overpowered her. Years later, the Ghanaian Rosemond had emerged as unrepentant prostitute who felt no qualms about drugging or attempting to kill her children when they hindered her work. She also connived with male partners-in-crime to rob her ‘clients’. In the process, she had four children and the Nigerian fourth baby father asked her to marry him. He brought her to Nigeria. But he gave up the idea when his family objected. Not knowing what else to do, she reported herself to the Holy Spirit at The SCOAN. There, she received prayers in the mighty name of Jesus Christ. After the prayers, Rosemond suddenly developed a deep love for her children, asking to see them and be allowed to show them love. Before ending her testimony on Sunday, she prayed that women who are still living the kind of life she lived in the past would change their ways.

FOR THE MUGYABUSOS, IT’S A BABY GIRL AFTER 11 MISCARRIAGES!

It was nine years of agony for the Mugyabusos eleven pregnancies ended up being miscarried. It was a peculiar situation as each miscarriage occurred in the fourth month of pregnancy! According to Mrs Mugyabuso, the miscarriages occurred after an evil woman appeared to her in the dream. In 2017 they had come to The SCOAN, where they received prayers in the mighty name of Jesus from Prophet T.B. Joshua, as well as The New Morning Water. On the night of that same day, Mr Mugyabuso saw Prophet T.B. Joshua in his dream assuring the couple that their problem had been solved. They returned to Tanzania, continuing to pray and minister The New Morning Water. This time, the pregnancy made it to term! Last week and they came to The SCOAN with their baby girl to testify of God’s goodness! The couple advised people to focus on God no matter the situation they are in.

BUT FOR DIVINE MERCY, A SURGICAL ERROR WOULD HAVE KILLED HER!

When the pregnant Mrs Cynthia Lavoe had gone to the hospital on the 18th of April 2018, she had been hoping to return home with a baby. But after three hours of energy-sapping labour, she had had to leave for home with nothing but surgical stitches on her belly. Her baby had died in the womb and the doctors had had to evacuate it. Three days later, Mrs Lavoe and her husband, Samson, began to notice that something was amiss, so they returned to the hospital. However, the tests revealed nothing even though the woman continued to feel severe pains even as her stomach swelled and fluid flowed out of her stitches. As designed by God, a friend gave one of the Good Morning Stickers he had received at The SCOAN to Mr Lavoe, who handed it over to his wife, urging her to pray with it and place it over her stomach. That night, Mrs Lavoe had a dream in which somebody told her that something had been left in her stomach during the surgery. In the morning, she returned to the hospital and as the nurses dressed her wounds, one of them noticed something unusual sticking out of the stitches. She pulled at it – and it turned out to be a surgical gauze! The gauze which was forgotten by the surgeon in her womb during evacuation of the dead baby, had soaked up fluid and had been causing damage in her system. The couple testified on Sunday that Jesus is the Master Healer and urged people not to joke with the Good Morning Sticker and other faith tools.