SON OF DAVID, HAVE MERCY ON ME! - The Synagogue, Church Of All Nations - SCOAN - Prophet T.B. Joshua (General Overseer) Skip to content 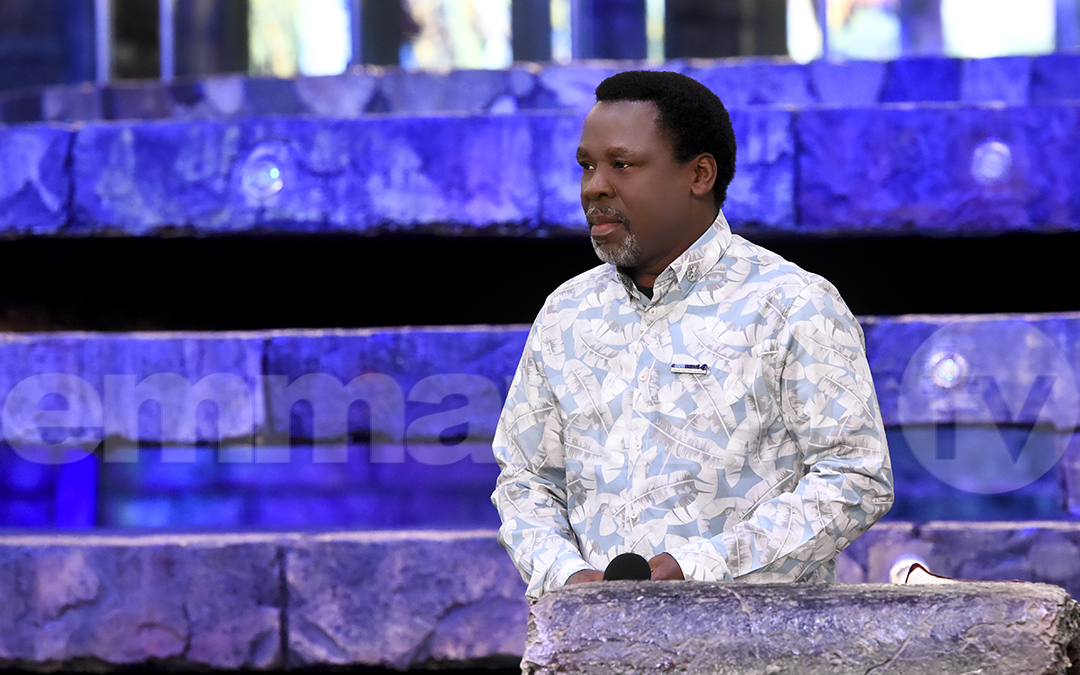 The SCOAN Choir welcomed the Holy Spirit into the Arena of Liberty, asking that He fill the people with His presence and take control of the service. Several divinely inspired numbers after, the SCOAN ambience had become Spirit-filled as the people made heart contact with God.

In her message titled YOUR DOUBTS ARE UNRELIABLE, Prophetess Yinka stressed the need for Christians to show unwavering faith in God’s ability to see them through every situation. She said it was important to focus on what God has already done for us instead of burdening our faith by worrying about the things we think we are yet to get from Him. Backing up her message with Bible references such as Genesis 3, Matthew 6:25-34, Matthew 14:28, Numbers 11:21, Judges 6:37 and Mark 8:17-21, she warned the congregation about allowing satan to put them in a vulnerable situation owing to doubt. She said, “Whatever situation you may be facing, don’t doubt your faith but doubt your doubts because they are unreliable.”

By the time Prophet T.B. Joshua climbed on the Altar, The Arena of Liberty had been saturated with the aura of the Holy Spirit, with many worshippers having received healing, deliverance and salvation during the healing and mass prayer sessions. The man of God further prayed with the people, prophesying into their lives as the Holy Ghost beamed a light on the root causes of problems. He admonished them on the essence of praying to God with a sincere heart, crying, “Son of David, have mercy on me!” since no one is righteous. Prophet T.B. Joshua said, “Prayer is often a wonderful revealer of the heart.” He therefore asked the church to “approach God with a humble, dependent and unpretentious attitude of the heart.”

When her suitor had first started to ask for her hand in marriage, Joy Ukwu had been more interested in furthering her education in nursing and building a career. However, following persistent pressure from her friend and family members, she found herself agreeing to marry the man, whose family she never met. His family never showed up for the engagement or the wedding. The man had claimed to be a pastor who needed to marry a woman like Joy so his ministry could flourish. However, three months after, the marriage was over and the man had showed her a different side of him, threatening to kill her and her unborn child. That was the situation two Sundays ago when Prophet T.B. Joshua mentioned her case during the Mass Prayer. For the past 14 years, the absent husband and father of a 14-year-old has not been heard of or seen since he walked out of the marriage. Since his mysterious disappearance, he has been intruding in Joy’s dreams threatening to kill her. To the glory of God, after the prophecy by the man of God, Joy has received her total freedom from the ghostly presence. Emmanuel!

FOR THE ADJEIS, THE CAUSE OF BRONCHITIS, EPILEPSY AND ANGER IS UPROOTED

Two weeks ago, Mr Charles Adjei had visited The SCOAN with his wife Janet and their seven children. The Germany-based Ghanaian family had flown in from Germany, their current base. Their immediate petitions to God concerned the cases of bronchitis and epilepsy being suffered by two of the children. As they sat for prayers, however, the Spirit of God located the root cause of the family’s problem: There was a spirit tormenting the children’s mother, who had met her husband in the course of her work as a trafficked sex worker in Libya and Italy. After the spirit in her manifested before vanishing forever, Prophet Racine prayed for both children and they received their perfect healing, in the mighty name of Jesus. Since their mother’s deliverance and their own healing, the children have come into a new lease of life – no longer needing their drugs and other medical aids. A third child in the Adjei family also received a miracle, as an expired ear implant fell out of his ear on its own, although the doctors had been planning a surgery.  A former pimp himself, Mr Adjei advised people not to consider travelling to Europe through the Libyan Desert. On her part, Mrs Adjei glorified God for also saving her from the spirit of anger; she advised women to desist from prostitution and not to feel shame in confessing their sins and turning to God.

She was what could be called a wayward wife with an incredibly doting husband. Try as much as he did to please her, Mr Michael Njoku could not quite get his wife Francisca to focus on him, as she was lost in the fantasy of social media affairs. Despite sending her to school, renting her a flat and furnishing it and buying her a car, Mr Njoku’s wife still could not bear the sight of her husband, cheating on him with different men, including one of her teachers at university. A fortnight ago, however, Mr Njoku’s patience was rewarded as the Spirit of God fell upon his wife, with the spirit in her manifesting. He had been convinced that her problem was spiritual. Mrs Njoku had herself requested that the family visit The SCOAN. Today, the mother of two now has full affection for her husband and she no longer seethes with anger, desire other women or watch porn on her phone. Also things of the past for Francisca are dreams in which she used to be chased by dogs and have sex with men. She advised people to have faith in God and not be ashamed to confess their shameful actions. Mr Njoku advised people to follow God’s leading on the issues in their lives.

For Mrs Talatu Ubale, divine healing came a week ago as Prophet T.B. prophesied about her case during the Mass Prayer. She had suffered from the torture of having an object move around her swollen stomach, causing her severe pains. She had gone to different places in search of a solution but her case had remained the same until a fortnight ago. Mrs Ubale confirmed that, as the man of God had prophesied, something had burst in her stomach during the prayers, after which she went to the restroom and passed out a thick bloody substance. “Now my swollen stomach is a thing of the past,” she testified in church on Sunday. She advised people to run to God for solutions to their problems.

DELIVERED FROM THE OCCULT AND SPIRIT OF ARMED ROBBERY

For Mr John Okon, a Nigerian from Akwa Ibom State, deliverance from the occult came last week through a prophecy from Prophet T.B. Joshua. For eight years, he had been a member of a cult into which he had initiated others. He would have dreams in which he saw himself engaging in armed robbery, something he also did in real life. Since the prophecy two weeks ago, Mr Okon no longer desires to keep company with his occult friends or dream of engaging in armed robbery. He advised people to keep good company only.

HEALED OF SEVERE SHORTNESS OF BREATH

It was a spectacular Mass Prayer healing for Mr. Cabangani Ndlovu, a New Zealand-based Zimbabwean who had come to The SCOAN in faith two weeks ago. As he prayed along with Prophet Racine, Mr Ndlovu suddenly found himself bleeding from the nose. It had started with a trickle but soon became a little pool of blood. Yet, this was no case of life-draining blood loss; Mr Ndlovu was in fact receiving his healing from shortness of breath, an affliction he used to experience mostly in the morning. Moreover, he used to suffer a severe headache at least twice a week and his neck would feel heavy. “I haven’t felt any trace of any headache and I sleep like a baby now,” Mr Ndlovu testified of his experience since his healing. He advised people to cast their burdens upon Jesus.

For Mr David Agbhame, it had all seemed like fun. The young man had simply wanted to make money and get by in life. However, he had done it the wrong way, seeking succour in the laps of women old enough to be his mother. At 21 years of age, he had married a woman in her fifties, having taken a blood oath with her. Three years later, the marriage packed up. Perhaps not fond of his freedom, Mr Agbamhe soon got entangled with another older woman, this time someone in her sixties. When that relationship ended, he eventually married a woman within his own age range but the affairs with older women continued and he lacked affection for his wife. It was in church two Sundays ago that Prophet T.B. Joshua had prophesied about Mr Agbamhe’s case, asking him to surrender to God. As he identified himself, Mr Agbamhe confirmed the prophecies about his affairs and his inability to satisfy his wife sexually. A day after, at The SCOAN Living Water Service, the spirit in Mr Agbamhe manifested once he stepped on the Altar. Since his deliverance, he no longer dreams of old women. “I now see my wife as a beautiful woman,” he testified on Sunday. Mrs Agbamhe said she also received deliverance from the spirit of anger. The couple advised people to have faith in God and attend a living church.

Twenty-three-year-old, Mr Godwin Agbonson suffered from stomach poisoning. The hospitals could do nothing for him; he couldn’t eat solid food and he couldn’t finish his education owing to the grievous pain from the condition. However, after the Holy Spirit overshadowed him during The SCOAN Living Water Service on Monday, Mr Agbonson began to vomit thick blood, to the shock of those around him. Feeling no more pains in his stomach after vomiting, Godwin called for food and for the first time in 23 years, he ate a full meal of rice and meat. “That was the first time I ate normally, like a human being,” he told the church. One of the two older brothers who accompanied him to church also received healing from a stomach ulcer. The brothers advised people to have faith in Jesus Christ.