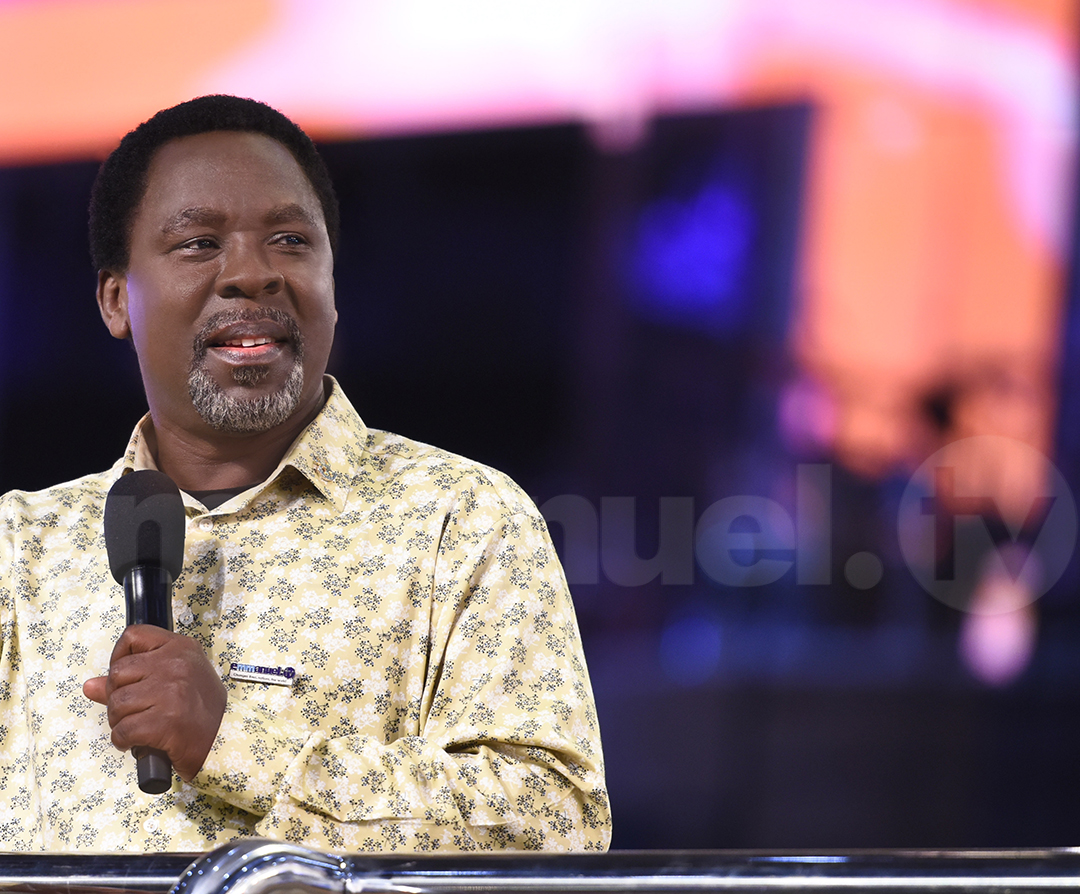 It was clearly another divinely inspired worship service on Sunday as The SCOAN Choir’s supplications ascended up to Heaven. Such was the power of the singing ministration that many among the congregation began to receive their healing and deliverance right then, vomiting the satanic deposits in their systems.

Prophet Racine began his sermon titled: “THE KNOWLEDGE OF THE TRUTH” by assuring the congregation: “Your fear will disappear; your trouble will be settled, in the mighty name of Jesus Christ!” He continued, “The greatest problem we have in the world today is that people serve a God they do not know”. Reminding the church that there is no explanation to God’s works, he advised them to instead focus on knowing the truth about any action of the Spirit. Racine cited Scriptures such as John 4:22, Psalm 103:7, John 8:31, 1 Samuel 28, Acts 16:14 and John 1:43-47 as he sought to build the people’s faith. Distinguishing between sense-knowledge truth and revelation truth, Racine spoke against confessing the Word of God by mouth but denying it in action.

Stepping towards those in the congregation sick and afflicted, he implored Christians to “believe the impossible and receive the incredible”. Speaking the name of Jesus Christ, Prophet Racine stretched forth his hand in prayer and the impossible happened – those bound with walkers, crutches, lumbar corsets began to walk, those with neck collars began to move freely, those with various ailments and diseases began to confess their liberty as they received a touch from Heaven.

As the congregation rejoiced in the goodness of the Lord manifest in their midst, Prophet T.B. Joshua entered the altar. Before going into the prayer and prophecy session, the prophet taught the church the importance of saying, “Thank You, Jesus” all the time. He said that cultivating the habit of saying, “God bless you” and “Emmanuel” to others will help us to chase away the devil and his agents. In his words: “Greet all your friends everywhere, ‘God bless you. Emmanuel!’ You will see many people will be running from you and many will be coming to you. You need good people, you need inspiring people, you need people that can help you…not friends that are dividing and subtracting”.

Continue to cultivate this Godly habit as you witness, through this medium, the hand of God at work in The SCOAN auditorium. A million thanks are not enough for what Jesus Christ is doing but from our hearts we cry, “Thank You, Jesus!”

“If you are ready to receive, Jesus is ready to touch your case today,” so Prophet Chris told Mr Festus Okey as he prayed for him two Sundays ago. The Imo indigene had prostate issues and difficulty in walking due to lumbar spondylosis. More tragically, he had been a bed-wetter all his life. Unable to continue bearing the pain all over his body, he took his case to God at The SCOAN. After the prayer, he stood up and walked without any feeling of pain whatsoever and one week later testified that the childhood affliction of bed-wetting is now over. On Sunday, he returned to church to share his joy with God’s people. Thanking God for healing him, he urged everyone to trust in God.

FOR THE FIASHIDES, THE FLAME OF LOVE IS RE-IGNITED AS DEMONS ARE BANISHED

For Engineer Samuel Fiashide and his wife Georgina, it was the dawn of a new day in their marriage a fortnight ago, when they received their deliverance at The SCOAN. It was sometime in 2012 that Mr Fiashide had a dream in which he felt something enter him. It was the spirit of backwardness, suicide, joblessness, disease, anger and marital strife and those curses began to manifest in his life. On her part, Mrs Fiashide suffered attacks by a spiritual husband who made her life miserable. This bondage came to a stop and the couple was finally set free after prayer in the mighty name of Jesus Christ at The SCOAN. “No more nightmares and now I breathe well,” the Ghanaian engineer testified on Sunday. Of the demons that had tormented her, Mrs Fiashide said, “Now, they are far away from me…Keep trusting in God; He will surprise you,” she advised the congregation.

NO LONGER A SLAVE TO LUST

The spirit of lust and prostitution had seized hold of her, driving Miss Atser towards the precipice in a bid to destroy her destiny. She had engaged in same-sex affairs just for the fun of it even while selling her body to men and uploading her sex videos online. She had visited a witch doctor who slept with her before giving her charms to aid her in the job of prostitution. As time went on, she found that her modelling career was taking a nosedive, as she focused only on satisfying her flesh. Urged by her grandmother to visit The SCOAN, young Miss Atser had found her way to church two weeks ago and today after her powerful deliverance, her life is no longer the same. “Seek first the Kingdom of God; prostitution is never the way out,” she advised the youth as she shared her radical transformation – from the inside out.

Mr Frank Gogo began his testimony by telling the congregation he hoped their faith would be boosted by his story. By the time he was done, it was clear to all that the right hand of God had indeed fallen upon him. The estate agent, who had no formal education, had been struggling to sell off the properties in his care. Despite all he did, potential clients kept deserting him, sometimes at the very point of payment. He came to The SCOAN, received prayer and went home with the Morning Water. After praying and ministering the Morning Water for some time, he had a dream in which he saw the man of God hand him a big fish.

He noticed things started changing in his business and today, he is the owner of multiple businesses including a lucrative tilapia business and several luxury cars. “You need to clap more,” he told the congregation as he showed off some of the blessings he has received since his breakthrough. “I came from a poor family and didn’t finish my schooling,” he stated. “Sometimes I think I am dreaming,” he added. Speaking of the Morning Water, Mr Gogo said: “This is the master of any problem you have – an atomic bomb”.

Mrs Nicoline Ngwei, a Cameroonian, was ill; she lacked energy and would vomit anything she ate. She went to see her doctor, who diagnosed her of a “very critical” kidney ailment and sent her to a specialist. Believing in God’s healing power, the mother of five took her life in her hands as she turned to God in prayer. As she began to minister the Morning Water, she prayed thus: “Oh God, take more of me and give me more of You. Thank You, God, for making me whole again”. In faith, she returned to the specialist who examined her and declared her kidneys healthy again even as he expressed his surprise at the healing. “Now I can do all things,” she said. She advised people to use the Morning Water in faith so that they can receive their own testimonies.

Sitting in her seat at the end of the service, she contemplated leaving without letting the church know about the blessing she had just received. The Holy Spirit, however, whispered her case to Prophet T.B. Joshua, who asked her to identify herself. “There is a woman here; you are bleeding.” The woman in question was Mrs Falnyi Chinda, a Nigerian from Adamawa who had suffered from bleeding for over five years. Advised by her in-law to visit The SCOAN for prayer, Mrs Chinda was in church two weeks ago and the prophecy located her after the Mass Prayer session. Announcing that the power of God had set her free, she exclaimed that she is now free from the bleeding and advised all people to depend on God.

“NOW I’M FREE FROM THE STIGMA OF BED-WETTING!”

“There’s a woman there; when you sleep you find yourself wetting the bed. Come out. It’s not your fault; it’s a family problem.” That was the word of prophecy for Miss Ethel Machipisa who had been bed-wetting for 15 years. Two weeks ago, she had received her deliverance during the Mass Prayer at The SCOAN Live Sunday Service. While testifying this Sunday, she revealed that her cousin was also a bed-wetter. The problem which had isolated her from people and made her lose her self-esteem, was now a thing of history as Miss Machipisa told the church on Sunday that she had not bed-wet since her deliverance. She advised people around the world to never lose hope in God.

When they kidnapped him last week, the abductors of Edo-based cab driver Mr Paul David had believed they would make no less than five million naira off his family. They made their demand clear when they contacted Mr David’s family two Mondays ago, around 5:30pm. But they were so, so wrong! They hadn’t realised that their captive was a relative of Partners of Emmanuel TV based in Germany. Contacted for help from Nigeria, they put a call through to one of the Emmanuel TV Prayer Line numbers. The word from the Lord was this: “He will be released”. True to the prophecy, by Tuesday, Mr David has become a free man again and not a cent was paid as ransom! “If you believe in God, nothing will shake you,” Mr David told the congregation. Having panicked at some point during the abduction saga, David’s brother advised people to avoid losing faith and to focus on God, not fear. Let us appreciate God for all He has done, all He is doing and all He is about to do – He is about to do more than you could imagine!