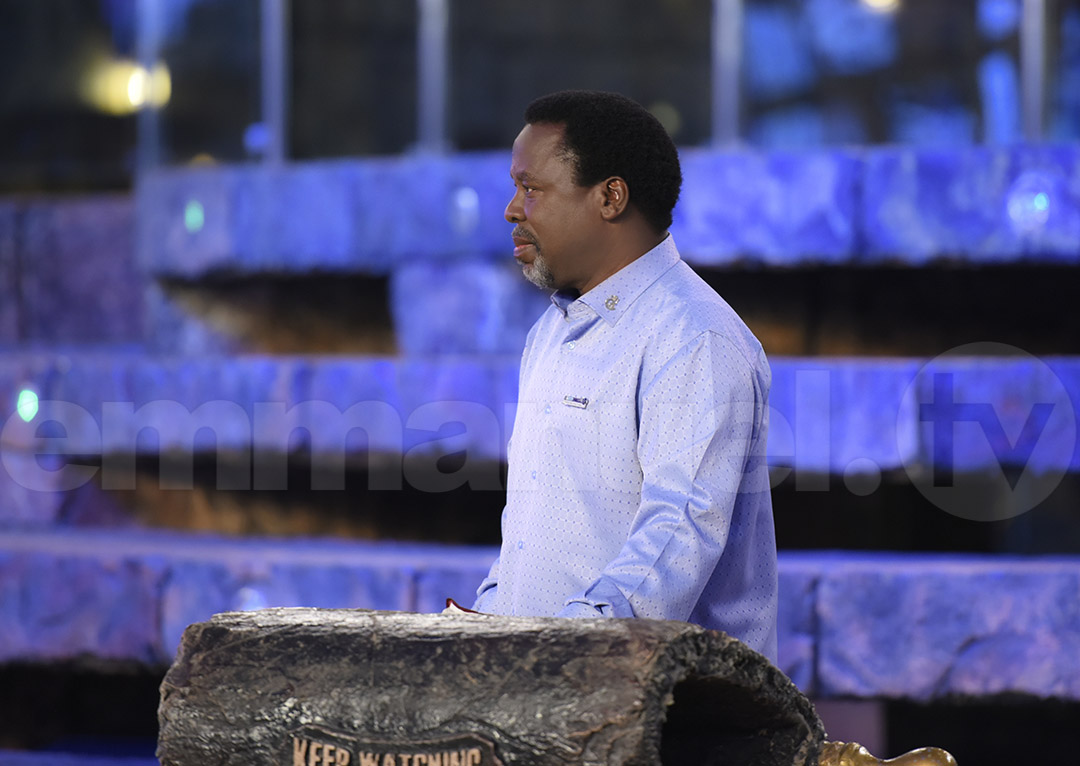 After calling for God´s will to be done in theirs and the lives of the congregation, The SCOAN Choir urged everyone to enter into God´s presence with all of their heart, laying down their burdens before His throne of grace. Who on earth, they asked, could have imagined that Jesus of Nazareth would lay down His life to rescue mankind?

After the praise and worship session, Prophet TB Joshua joined the congregation. He exhorted them on the need to show love to those who hate them and to quit indulging in self-pity and self-righteousness. He thereafter prayed for them in the mighty name of Jesus Christ, giving words of prophecy to deliver the captive, heal the sick and save souls.

In a well-illustrated message, Prophet Chris spoke on ‘Damage Control’, taking readings from John 10:10, Ephesians 4:26-27,31-32, Galatians 5:14-15, Luke 6:29, Mathew 5:25, Romans 12:18 and Hebrews 12:14. What all these scriptures have in common is the need for Christians to imbibe the virtues of forgiveness and tolerance, realising that no person is perfect and that the key to gaining God’s promised blessings is by refusing to be satan’s captive through holding grudges. In his words, “Everyone has been wronged and everyone gets it wrong,” hence the need to avoid the “self-inflicted wound” of harbouring offence.

“IT WAS A NEW ME THAT STOOD UP FROM THE GROUND!”

For seven years, Madam Chidinma Ohuakanwa, a Nigerian, suffered from a stiff neck, stiff hands, back pain, headaches and high blood pressure due to cervical spondylosis.

Expectedly, the problems made it impossible for her to lead a normal life at home and in the office. With her medications, neck collar and physiotherapy sessions unable to bring her relief or help her sleep at night, the Abuja resident took her friend’s advice to seek divine healing at The SCOAN. Two weeks ago, she visited and received prayers in the mighty name of Jesus Christ. “It was like a current ran through my whole body,” she said of her experience during the prayers, adding: “It was a new me that stood up from the ground.” During her testimony last week, she prayed for God’s blessings for her friend who introduced her to Emmanuel TV.

“THIS IS THE MEANING OF ‘GOOD MORNING’!” SAYS MAN HEALED OF SLEEP APNEA

For Mr Ted Bobier, a 55-year-old Canadian artist, God manifested Himself in a mighty way two weeks ago. Afflicted for 20 years with sleep apnea, a dangerous condition that could have taken his life at short notice,

Mr Bobier had come to The SCOAN seeking God’s face. As the woman of God prayed for him, he felt the Holy Spirit overshadow him as he began to vomit uncontrollably, his body shaking vigorously as he fell on all fours. Once he got back on his feet, Mr Bobier gave thanks to the Master Surgeon, Jesus, who had healed him perfectly. Testifying on Sunday, he told the congregation of how he had been sleeping without his breathing machine since his healing. He declared, “This is the meaning of ‘Good Morning’!”

It was a spinal cord problem that made it difficult for Mr Ikwueze Ikechukwu to walk. A Nigerian resident in Lome, Togo, he had tried numerous hospitals and medications and medical aids, including a lumbar corset, which rather worsened his condition.

“It made me to lose hope in life,” he told the church last week during his testimony. His Lagos-based fiancée had advised him to seek divine help at The SCOAN, since his problem had in fact followed a dream attack. In faith, he had visited The Arena of Liberty a fortnight ago and God’s unfailing power had restored his spinal cord to normalcy, after prayers by the woman of God.

“I received my healing instantly. My body is so light,” he said while exercising to demonstrate his perfect healing. He advised people to trust Jesus for their healing at any living church.

BLEEDING ENDS AFTER WORD OF PROPHECY

Hers had been a case of constant bleeding that had defied all known medical solutions. The Ghanaian Mrs Patricia Amewugah had been one of the recipients of blessings at The Arena of Liberty two weeks ago. For the past three months she had been bleeding and had attended The Sunday Service in faith, believing her condition would be mentioned. As he took to the altar and led the congregation in prayer, prophecies began to flow and the case of Mrs Amewugah was opened. As the prophecy was spoken Mrs Amewugah’s heart jumped and she quickly stepped forward to confirm the words of prophecy. As instructed by Prophet TB Joshua she went to check herself and found the bleeding had come to an end. “Speak to God and ask Him to locate your case”, she advised people.

He was a con artist, specialising in parting marriage-seeking women from their hard-earned money. He would bait them on social media and defraud them of huge sums after meeting them in person. However, he wasn’t acting alone; he had the support of charms – a ring and some liquid given to him by a witch doctor– with which he hypnotised his victims. He would wear the ring on a finger and place drops of the liquid on his tongue. Sometimes he took as much as 10,000 thousand dollars from his foreign victims.

Tired of earning his living this way, Mr Sylvester George visited The SCOAN for deliverance, removing the ring from his finger and putting it in his pocket as he stepped into the church. The word of prophecy located him as Prophet TB Joshua ministered. On Sunday, he returned to church to testify of his new life in Christ. He advised fraudsters to realise that God’s own gifts are the best and most long-lasting.

When she was a child, together with her siblings, she used to taste of the blood of animals sacrificed to her family idol. Little did Miss Joy Ndak know that the ritual was going to affect her in later years. Now 30 years old, Miss Joy had been a bed-wetter for the past 25 years, like her siblings.

The condition has made it hard for her to settle down, as prospective husbands leave her once they discover her problem. To the glory of God, she received her healing two Mondays ago, at The Living Water Service. There, the contrary spirit in her had exposed itself before being expelled for good. In her testimony last Sunday, Miss Ndak told the congregation that she had not bed-wet since her deliverance. She therefore advised everyone to seek the face of God for their deliverance.

Miss Edith Nsowaa, a Ghanaian, suffered from hepatitis for years. Owing to the disease, friends and family deserted her. In trying to find a solution, she exhausted her resources and had to fend alone for her young Norwegian-born son.

Besides her hepatitis, Miss Nsowaa also suffered stagnation in life. To raise money, she had tried to sell off a piece of landed property but nobody was willing to buy even at the incredible giveaway price she was willing to accept. She took her case to God. After a visit to The SCOAN, she started ministering The Morning Water. Soon, she secured title documents to the land after many years of futile application to the land authorities.

More importantly, she received her perfect cure from hepatitis even as her son has now been granted the Norwegian citizen’s privileges that he had earlier been denied. Before ending her testimony on Sunday, she advised people to place their faith in Jesus rather than fellow humans.

AND THEY NAMED HIM ‘ISRAEL’!

It was just a few days after ‘The Nazareth Meeting with TB Joshua’ (June 23-24, 2019). Helen Muyiwa, a youth member of The SCOAN, had received one of the anointed T-shirts used for branding the event. When word reached Helen that her older sister, Omolara Owolabi, had been in labour for over a week, she rushed down there with her T-shirt.

“Do you believe God can do it?” she asked Omolara. “Yes,” Omolara answered. “Then wear this,” she urged her, in the mighty name of Jesus. Meanwhile, their mother had decided she was moving Omolara away from the hospital, which had insisted on surgery. Within two hours of wearing the T-shirt, Omolara began to feel her baby bob up and down in her womb.

Pronto, they moved to another hospital and in minutes, her baby boy was out. And they named him ‘Israel’! Omolara told the church: “With God, all things are possible!”

PARTNERS IN CRIME SET FREE FROM SPIRIT OF FRAUD AND PROSTITUTION

Two weeks ago, Peter and Chidinma had attended The Sunday Service as a prospective couple. The duo had first met in Nigeria when Peter inducted his partner into an international prostitution ring, making her swear to an oath of allegiance.

Before the event that forced them to have a change of heart and return to Nigeria in hopes of getting married, they had collaborated on many shady schemes in which they extorted money from immoral men after setting them up in Dubai hotel rooms. Having escaped jail in Dubai, unlike her colleagues in the trade, Chidinma agreed to start a new life with Peter, who had been asking to marry her.

As Prophet TB Joshua ministered during the service, the Holy Spirit prompted him to mention their case. After their confessions and testimony today, Chidinma advised girls like herself to embrace God and not get rich quick schemes that only lead to shame, prison and ultimately an early grave.