DISCOVER THE MYSTERY OF GRACE - The Synagogue, Church Of All Nations - SCOAN - Prophet T.B. Joshua (General Overseer) Skip to content 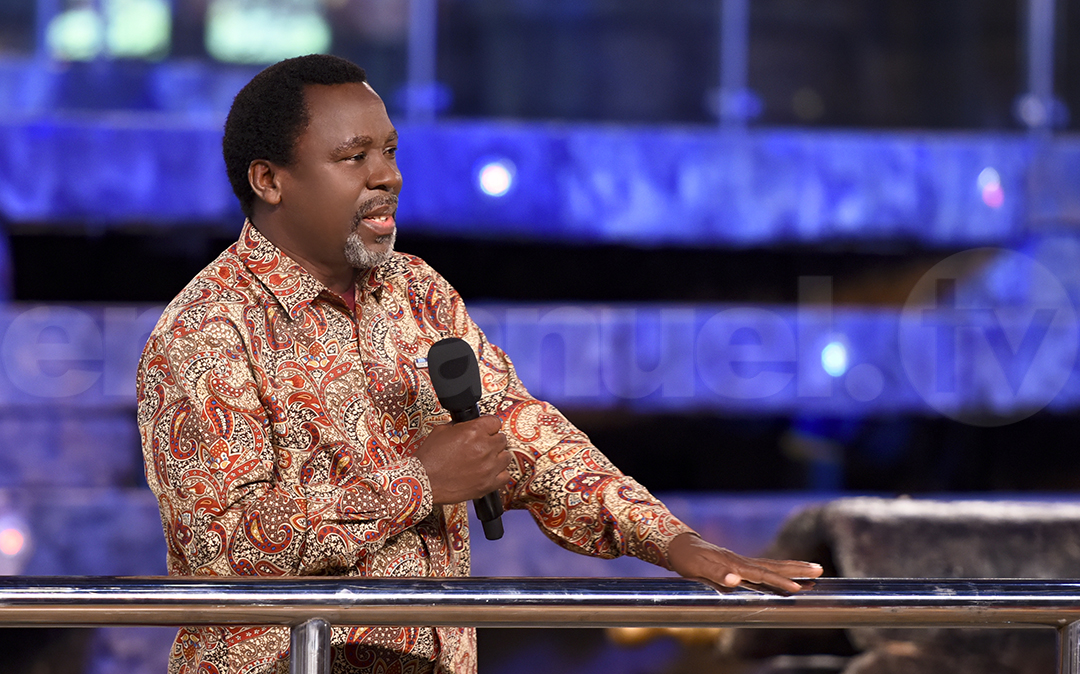 Whatever fear tomorrow may hold, the divinely inspired songs composed by T.B. Joshua comforted those present in The SCOAN congregation that there is no reason to murmur or fear because they have Jesus. As the worship set the scene for the King of kings, the healing and saving power of Jesus began to rain on everyone and the Seraphim descended into the midst of the congregation to work wonders, to the shame of the devil and his kingdom.

Appearing on The Sunday Service altar for the first time in a couple of weeks after the meeting in Nazareth, Prophet T.B. Joshua thanked the people for their prayers and support. As he prayed with the church, he also sent out words of prophecy under the power of the Holy Spirit, thus breaking the yokes in the lives of the afflicted. He also shared a vision with them about his country, Nigeria, asking them to pray for President Muhammadu Buhari. These were his words:  “I am here to share a vision I had two weeks ago concerning my nation – Nigeria – the heartbeat of Africa. Let us pray for our government and President Muhammadu Buhari. There is no perfect man on earth. Ask God to protect and fill him with wisdom enough to lead this nation. In my vision, I saw the Seraphim coming down with rain. This rain comes with freshness and calmness. Nigeria, let us pray!”

For her message titled ‘The Mystery of Grace’, the woman of God, Yinka read from the proof text Judges 11, the passage about Jephthah the Gileadite, who was kicked out of his father’s house because his mother had conceived him in harlotry. As the story goes, Jephthah was later called upon by the elders of Israel to lead them in war against Ammon. After achieving victory for the Israelites, Jephthah, the rejected son of Gilead, later became their leader. With this story, Yinka showed how God uses the foolish, illogical things of this world to prove His wisdom, as expressly stated in 1 Corinthians 1:27. She also cited the story of Joseph in Genesis 37 and of Moses in Exodus 2 to show that only we ourselves can derail God’s plans for our lives by giving in to despair and loss of focus. She said, “What you give your attention to can either keep you in the will of God or take you out of it.” As such, she added, our response to trials and temptations will determine whether we achieve God’s plans for our lives. She therefore urged the congregation to see unpleasant situations as God’s way of bringing out the best in them; that, she said, is the mystery of grace (Romans 8:28, Ephesians 1:3,7-11). “Control your character if you cannot control your circumstances,” she concluded.

Her convulsive trembling could have frightened anybody not familiar with the workings of the Holy Spirit in The Arena of Liberty. Once the Holy Spirit was done dealing with the evil spirit in Miss Nambata Amwele, however, she regained her voice and composure and her first words were of gratitude to God, who had freed the Namibian from a 23-year yoke of uncontrollable urination. As tears rolled down her cheeks, she sobbed, “I’m light! I’m light! I was so heavy. Thank You, Jesus!” In the last three years especially, Miss Amwele had faced extreme cases of embarrassment as her bladder would suddenly fail her right in front of people. Bizarrely, during those years she never once wet herself during the night. However, part of her affliction included hearing a hissing sound in the morning, constantly feeling heavy and being troubled by a spiritual husband during sleep. In her bid to cope with the condition, she would eat heavily and take a lot of fizzy drinks, leading to a bloated stomach. Tired of it all, she decided to seek divine intervention.

After participating in The Monday Living Water Service last week, Miss Amwele received her perfect deliverance, in the mighty name of Jesus. At the service, she had wet herself publicly for the last time as the Holy Spirit expelled the root of her affliction. Since then, no more has she heard “the tick” that used to open up her bladder. During her testimony on Sunday, she advised people to see Jesus as the only Healer, no matter their illness and no matter how unworthy they might feel.

Seventy-two-year-old retired Nigerian Colonel Enameden Inyang had come to The SCOAN with the problem of difficulty in walking due to severe lumbosacral spondylosis and disc prolapse. For the past four years, the once active senior citizen had been forced to wear a lumbar corset. He also had diabetes and a painful swelling in his right shoulder. Believing in God’s healing power, Colonel Inyang had trudged down to The SCOAN, where he received prayers in the mighty name of Jesus, having lost all hopes in medical options, including daily physiotherapy.

After the prayers three weeks ago, he received his perfect healing and can now drive a car and move all parts of his body effortlessly. “I started developing unnecessary weight because I could not move myself,” he had said of his condition prior to the healing. As he concluded his testimony on Sunday, he advised people to trust in God Almighty and depend totally on Him.

Two Mondays ago, Cameroonian Miss Noella Ajiah had come to The SCOAN barely able to see without her glasses. As a child in primary school, the resident of Kuwait had had a dream in which somebody had plucked out her eyes and taken them away. When she woke up, she told her mother, who dismissed the dream as inconsequential. However, the little girl later started having severe problems with her sight; she began to feel a severe strain in them, leading to bouts of nagging headache. To help ease her pain, doctors gave her different medicated glasses, yet she never felt better. Her eyes felt so painful and itchy that she once demanded to have them removed so that she could have peace. Unable to read long phone texts and other written material, since she had ‘triple vision’, Miss Ajiah bore her problem of “refractive error” for the better part of her 31 years. The veins connecting her eyes to the brain having weakened, she had to permanently rely on glasses and eye drops. “Immediately I stepped on the altar, I fell and I cannot remember what really transpired but I know I manifested,”

she said of her experience at The Monday Living Water Service two weeks ago. Indeed, what had happened was that the evil spirit in her had thrown itself on the altar floor as it cowered from the Holy Spirit. For the first time in years, Miss Amwele walked for minutes without her glasses. It was indeed a surprise to her as she sat for over an hour without her glasses, seeing very clearly and feeling no pain or headache. “I feel fresh air inside my eyes – no more pus,” she testified on Sunday, showing a new medical document confirming her perfect healing, in the mighty name of Jesus. She advised people to take spiritual revelations seriously and to lean on God, the only One that can set them free.