ANOTHER SPIRIT-FILLED SERVICE AT THE SCOAN - The Synagogue, Church Of All Nations - SCOAN - Prophet T.B. Joshua (General Overseer) Skip to content 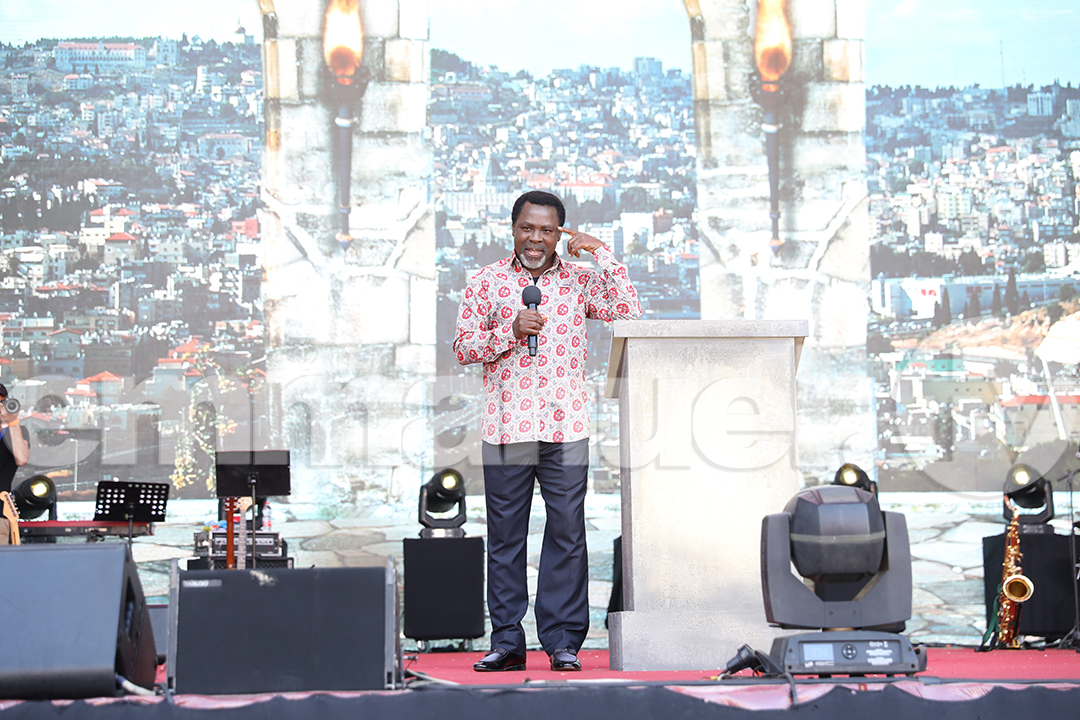 It was another cool Sunday morning in the city of Lagos. Inside The SCOAN, it was an even much cooler ambience as The SCOAN Choir extolled The Almighty Father through songs of praise and worship. From far and near, people had come to present their cases to God. “Son of David, have mercy on me. Let Your mercy speak for me. Your divine favour, locate me”, the choir sang, beseeching God to rain His shower of blessings on the congregants and viewers all over the world.

Being the Sunday after The Nazareth Meeting, the congregation got another chance to watch recaps of the event, seeing more clearly how the Spirit of God had saturated Mount Precipice, the location of The Amphitheatre venue of The Nazareth Meeting With T.B. Joshua (June 23-24, 2019).

“Whoever does not love does not know God, for God is love.” Those were the words of Prophet T.B. Joshua as he ended his message on the first day of the two-day event. On both days, astonishing faith-building miracles were recorded as the man of God prayed for attendees at the event in the name of Jesus Christ, casting out demons and paving the way for healing, breakthrough in the lives of the people. Indeed, the mighty name of Jesus Christ worked wonders in the lives of the people as evil spirits tumbled and thrashed about on the floor before fleeing. At the sight of the man of God, one negative spirit cried, “I am afraid of you!” Expectedly, the evil spirit was consumed by the fire of the Holy Ghost.

HEALING FOR THERESA EKADI, DELIVERANCE FOR HER  10-YEAR-OLD DAUGHTER 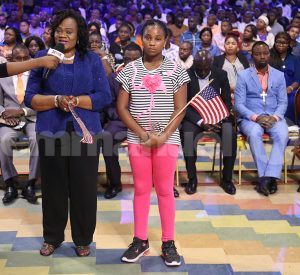 Late in 2018, Ms Theresa Ekadi was climbing down the staircase in her home when she briefly missed a step. By the time the 60-year-old regained her foothold on the floor she had torn a muscle behind her right knee. The following day she visited the doctor, who examined her and prescribed pain killers as well as a knee brace and walking cane. However, the US-based Nigerian decided she would take her case to God as all human efforts to get rid of her problem had failed. 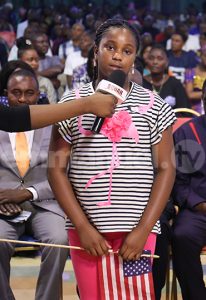 And so, on the 9th of December 2018 she attended The SCOAN Sunday Service, in the company of her 10-year-old daughter, Amanda. As Prophet Chris was about to pray for Ms Ekadi in the name of Jesus Christ, the Holy Spirit nudged him to prophesy about Amanda, whose mother admitted to be having “behavioural issues.” After deliverance prayers for Amanda, the prophet said prayers of healing for Ms Ekadi, who promptly stood up and walked without her aids. On Sunday, over six months after the prayers, Ms Ekadi and Amanda returned to The SCOAN to testify to God’s wonders in their lives. Since her healing, she has been able to move around painlessly and without assistance from Amanda, who herself testified to how God rescued her from bad company and behaviour. While Amanda advised the congregation to accept there is no problem God cannot solve, her mother urged parents to seek divine solutions for the issues in their children’s lives rather than screaming at them. 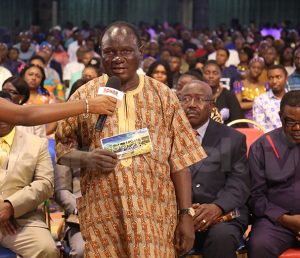 Last Sunday, while Mr Michael Otulugbu was making his way to church, armed robbers waylaid the bus in which he was riding with 14 other people. Rather an uncommon event in that area at that time of day, what might be even more surprising is the fact that the robbers singled him out for ‘protection’: They decided they were not going to take anything from him even as they dispossessed every other passenger of their money and personal effects, shooting some of them in the process. A recipient of the anointed Good Morning Sticker, Mr Otulugbu glorified God before the congregation for making the sticker a shield for him in time of danger. As he ended his testimony, he encouraged receivers of faith tools at The SCOAN to believe in the divine anointing upon the materials so that they can enjoy God’s blessings.

TESTIMONIES FROM THE NAZARETH MEETING WITH T.B. JOSHUA

BACK TO GERMANY WITH LIGHT! – MR HUNN REGAINS HIS SIGHT 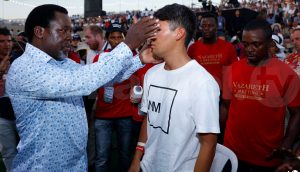 “I wanted to be delivered. I asked God to deliver me. And it just happened as I believed. It’s so great to experience that. Now I can see and there is no pain anymore.” 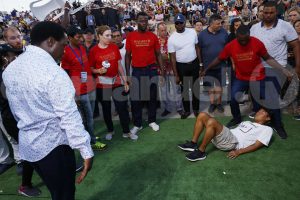 Those were the testifying words of Mr Hunn, who attended The Nazareth Meeting from Germany. His left eye had been swollen and painful and he could see nothing of the lovely sights of Nazareth. After prayers from Prophet T.B. Joshua, who wiped the ailing eye twice, Mr Huun regained his sight, to the glory of God. “Trust God; Jesus is the answer,” he advised. 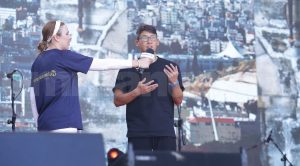 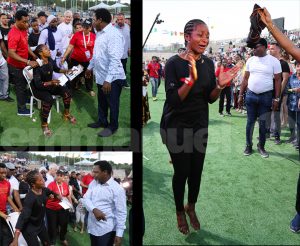 The ebullience in Cyndi Oliver was obvious as she testified after receiving her healing from rheumatoid arthritis. Three years ago, the UK-based property developer had developed cysts in her knees and could no longer engage in the intense workouts that she so much enjoyed. When the fluid behind her knees built up again after a first operation, she decided to take advantage of The Nazareth Meeting and receive prayers in the mighty name of Jesus. 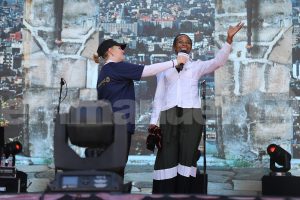 “I was completely healed,” she testified excitedly on Monday as she displayed her former walking aids. She urged people to believe in God’s anointing and to exercise faith. 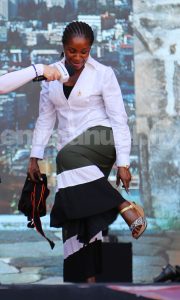 I NO LONGER NEED CRUTCHES TO WALK! 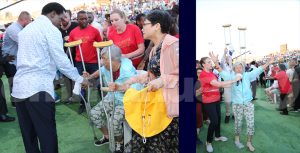 Li Gul Chua from China testified of the miraculous healing she received during the Nazareth Meeting With T.B. Joshua. According to her, for 6 years she relied on the use of crutches to walk. After Prophet T.B. Joshua prayed for her, she began to walk without the use of the crutches. 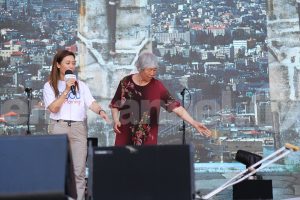 PASTOR HEALED OF A STIFF NECK OF SEVEN YEARS

Mrs Michelle Roos, a South African pastor living in the UK with her fellow pastor husband, also enjoyed the healing power of the Lord at The Nazareth Meeting. For seven years, she had suffered severe pains from cervical spondylosis leading to stiff neck. “When we got here, I could not move; I had to sleep standing up. I could not move my neck to the right; it was completely locked,” she told attendees as she testified after her healing. Speaking of the effect of the prayer, she continued, “I felt the power of God straightening and aligning my whole body.” 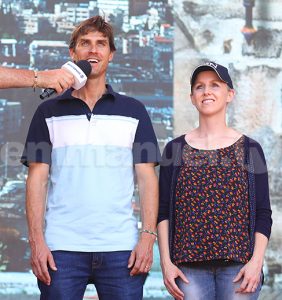 While her husband advised people to make God’s Word the standard for their lives, Mrs Roos urged them to have faith and understand that distance is no barrier to receiving healing and deliverance.