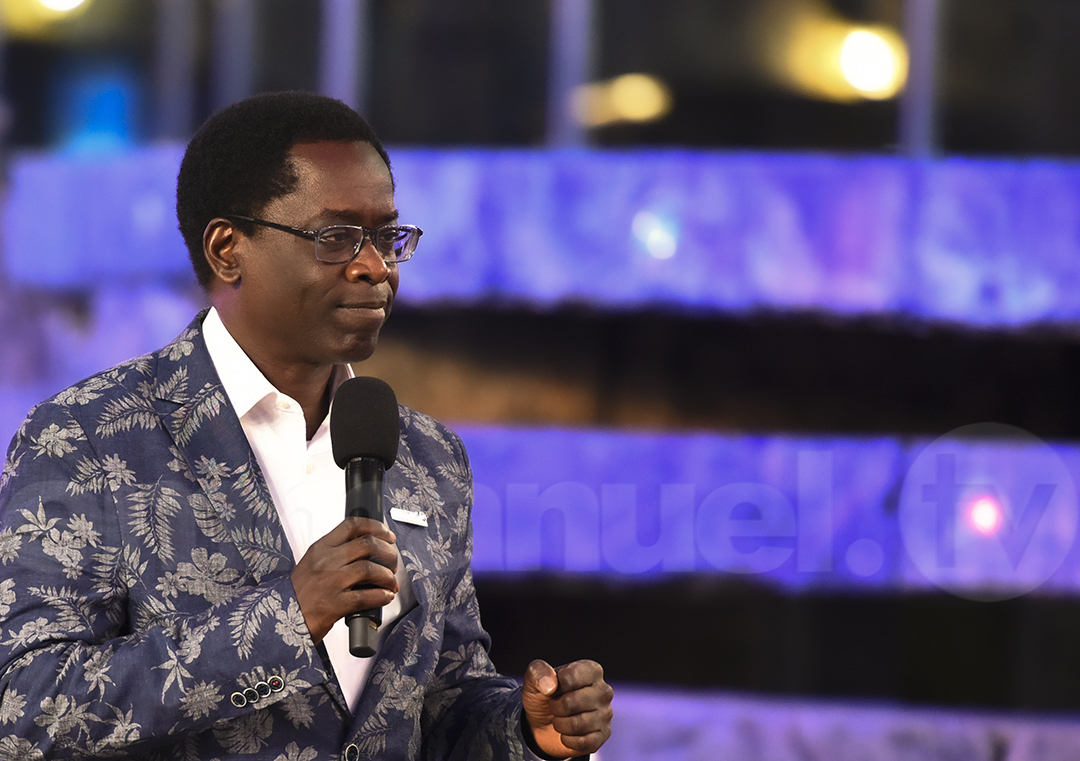 “Holy Spirit breathe in me,” so sang The SCOAN Choir as the worship session went into full swing, sending the congregation into a quiet frenzy of Spirit manifestation. As the Holy Spirit carried on with the work of sanctifying their hearts and acting in the people that their works may be holy, the ground was prepared for yet another Spirit-filled Sunday Service at The Arena of Liberty. 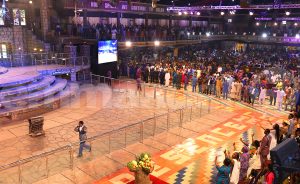 In a message titled TAKE HEART, Prophet Racine quoted Exodus 14: 13 and other biblical passages to back up his teaching on the need to overcome fear. Prophet Racine told the congregation to realise that “fear is a thief of faith and hope” that “paralyses our potential by weakening our determination and willpower, preventing us from taking important decisions.” Before ending the sermon, Prophet Racine called for a faith-building song interlude, after which he told the congregation on the need to develop their relationship with the Holy Spirit. Thereafter, he went into the healing session and the Lord showed Himself mightily in the lives of worshippers.

From Warri, Delta State, Nigeria, Mrs Ejiro Egbo came to The SCOAN in search of divine healing for her stiff neck owing to a motoring accident. Doctors had given her a neck collar to help the neck heal but she felt little or no relief. She was unable to do any work and could not even carry her grandson. 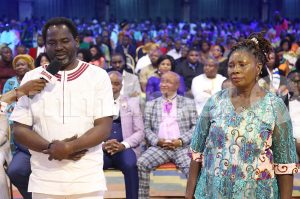 The vice principal had a miserable time as she waited in vain for a medical solution. As she received prayers in the name of Jesus Christ, she said, “I had a shock and was free”. Afterwards, the 56-year-old parted ways with her neck collar and moved her neck freely for the first time in a long while. Accompanied to the church by her son, Mrs Egbo demonstrated her perfect healing on Sunday as she turned her neck in all directions, stretching her limbs energetically. “Come to God for your healing and deliverance through our Lord and Saviour, Jesus Christ,” she advised people. 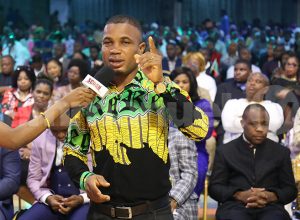 In a bid to bring reproach to Mr. Christian, the devil afflicted him with the spirit of compulsive stealing. “This thing started when I was child,” he said in confirmation of the prophecy by man of God, Prophet T.B. Joshua. According to him, he used to wake up in the middle of the night and pick a piece of meat from the soup pot, causing the soup to go sour. On one occasion, he again fell for the devil’s antics, as he stole from his very trusting employer, who promptly sacked him. In so many other ways, the spirit of stealing kept embarrassing him as he mixed with bad company. Two Sundays ago, however, he decided to take his case to God. At The SCOAN, a word of prophecy located him as Prophet T.B. Joshua mentioned his case during the Mass Prayer. After coming out, he received his deliverance. Testifying in Church on Sunday, Mr. Christian thanked God for freeing him from the bondage of stealing and “funny dreams”. To God be the glory! 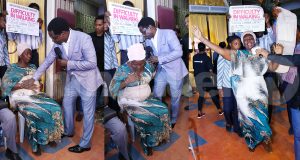 “I cannot wash; I cannot bend – my children have been helping me. I want Jesus to deliver me.” Those were the words of Mrs Paulina Awini, a Ghanaian who suffered excruciating pains from a disc prolapse that made it difficult for her to walk. 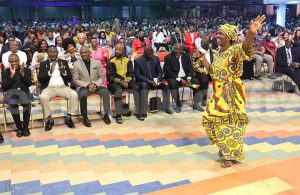 With a lumbar corset for support in the last one year, Mrs Awini managed to bring herself to The SCOAN for prayers, in the mighty name of Jesus. After prayers from Prophet Racine, she received divine strength in her limbs and regained the power to walk again without pains. During the Sunday Live Service, she testified about the awesome anointing that delivered her from all pain. “Worship only Jesus Christ of Nazareth,” she advised even as she exercised her body to show her perfect healing. 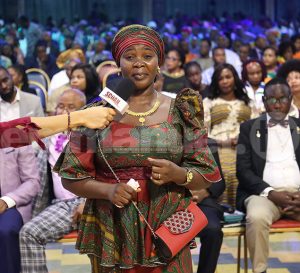 “There is a sister there – you have this urge for animals.” The word of prophecy indeed rang through in the case of Mrs Naomi Dauda, from Borno State, Nigeria. The woman came out to confirm the prophecy, explaining that she used to play fondly with dogs during her teenage years. She would place the dogs on her private part and in dreams she would also see men sleeping with her even as she barked in her dreams. During her years of courtship, the young woman kept experiencing disappointments with her partners. In marriage, she had an unsettled home as the spirit of anger made her consider quitting her marriage. “When I came here last week, I was praying, having been fasting,” she testified in church on Sunday about her expectations from God as she worshiped at the SCOAN on the Sunday she received her prophecy. After the prophetic message was given, she was delivered. During her testimony, she said she now has affection for her husband and sleeps like a baby. She testified that she is now completely free! She advised women to go close to God in order to ward off ‘spiritual husbands’. 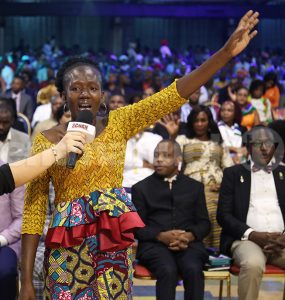 It was also a prophecy that located Mrs Gifty Awini. “There is a woman that is bleeding right now, wearing red,” Prophet TB Joshua had declared during The Mass Prayer. In fact, it was the Holy Spirit that had located the Ghanaian among The SCOAN congregation a fortnight ago. Confirming the prophecy during her testimony in church last Sunday, she said she had been bleeding for the past six years and had relied on diapers to help soak up the blood. The blood came with pains in the abdomen, she added. “God, do not let me go back the same,” Mrs Awini had petitioned her Creator during her first service at The Arena of Liberty. She received her freedom through the power of prophecy, in the mighty name of Jesus. She advised people to trust in Jesus Christ, the Saviour. 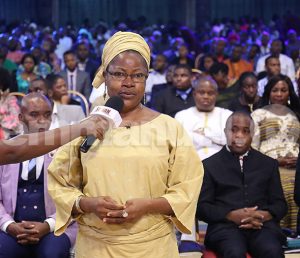 During a Live Sunday Service, Prophet T.B. Joshua prophesied about a lady, Mrs Tinubu, with the problem of bedwetting. “The Lord has touched you today,” the man of God had declared after the prophecy. Mrs. Tinubu identified herself openly. During her testimony on Sunday, she told of how bed-wetting had made it difficult for her to mix freely with people. She said she did not keep friends or go out owing to the shame of her condition. Since the word of prophecy, she testified, bed-wetting has become a thing of the past, to the glory of God. “Run to Jesus and pray,” she advised people seeking God’s hand upon their lives.