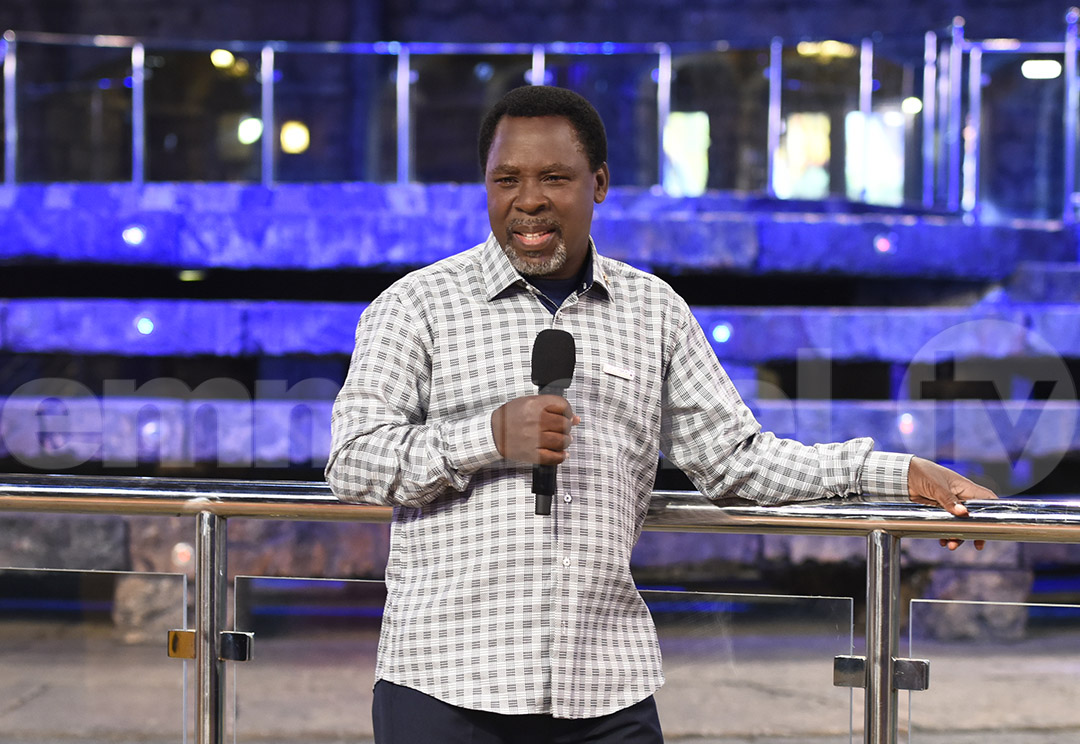 The SCOAN Choir sang at full throttle as they dug into their reservoir of God-glorifying songs. No sooner had they begun than the heavenly forces joined the congregation as manifestations of Spirit presence took over.

In the light of his upcoming 56th birthday on June 12, Prophet T.B. Joshua told the congregation and viewers that nothing would please God more than for them to show love to the sick and needy, especially people not previously known to them. Stating that obeying God’s commands is the way to show we love Him, the man of God advised the people to seek out those languishing on the sickbed and not only show love to them via giving but also to cultivate genuine friendship with them. The prophet said that doing good to the helpless would be a worthy legacy to hand over to one’s children. “You need something to pinch you, to bother you for the glory of God,” he said about the nature of sacrificial giving, which leads to being able to “live above human destruction”. Reading from John 14:14-15, he restated the need to demonstrate love for God, which requires us to help those in need at all times, whether or not we know them. “Love is life; life is love,” he concluded. 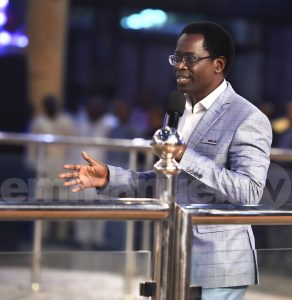 Prophet Racine spoke on “The Power of Faith”, asking the church to acknowledge God’s grace in their lives – in songs, words and purpose. With his proof text taken from Romans 10: 6-17, Prophet Racine stated that faith must be seen as a spiritual issue, a force that grows in man’s spirit, with all Christians having the capacity to activate the power in Jesus’ name through faith confessions, as recorded in Luke 10: 19. The reason, he noted, why some Christians don’t receive from God is that it is possible for one to be “a man of prayer but perhaps not a man of faith.” He added, “Prayer is not right if it doesn’t spring from faith.” Failure to release love and forgiveness to our neighbours, Prophet Racine further noted, will short-circuit the power of faith in our lives (Galatians 5:6). Summing up the connection between love and faith, he said: “We service our faith by loving those around us.”

His case was already deemed hopeless, from a human perspective. However, Mr. Emperor Akpalakpa trusted in God for his healing, even though his employers had let go of him on account of his illness. For nine months, he kept coughing up blood as cancer cells ate up his lungs. To prevent his lungs from collapsing, Ivorian doctors had injected the Nigerian twice a day, yet there was no improvement. Returning to Nigeria, Mr. Akpalakpa received the same treatment but the doctors eventually diagnosed him of lung cancer. “You have three years to live, maybe five,” the doctors told him soberly. Alarmed at the news, the 30-year-old ran to God at The SCOAN, trusting he would be healed once he stepped into the church two Sundays ago. As the Mass Prayer was ending, Prophet T.B. Joshua declared the anointing on any person still experiencing affliction. 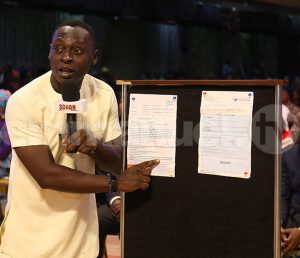 Immediately, Mr. Akpalakpa was struck by the anointing and he began to vomit gooey substances mixed with blood. “Immediately, I felt relief in my chest,” he testified. The vomiting continued for the next two days, he added. To confirm his healing, he returned to his doctors, who declared him free from all signs of lung cancer and asked him to return to church to give thanks to God. Declaring himself now ready to marry and raise a family, the Nigerian from Bayelsa State advised people to realise there is no disease Jesus cannot heal and that distance is no barrier. “Jesus is alive and real in The SCOAN!” he screamed.

When Mrs Sandra Oloyede developed what doctors later found out to be cervical spondylosis, she had thought it was something that medicine could handle easily. She turned out to be very wrong. Despite receiving drugs and a neck collar, her pains never eased; in fact, they became worse, making her life miserable and rendering her unable to care for her children. 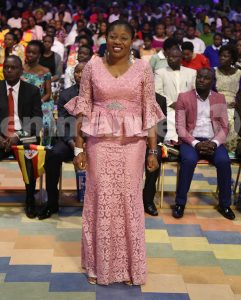 The doctors advised her to see a neurologist. However, her mother, who had been taking care of Sandra’s children, advised that she visit The SCOAN. After prayers, the 39-year-old resident of Delta State, Nigeria received her perfect healing. Beaming with excitement during her testimony on Sunday, Mrs Oloyede turned her neck in all directions as she asserted her healing, in the mighty name of Jesus. She advised people to realise that Jesus is the perfect Healer.

AFTER 7 YEARS OF STAGNATION, A PROFESSOR’S BLESSINGS CAME IN TORRENTS! 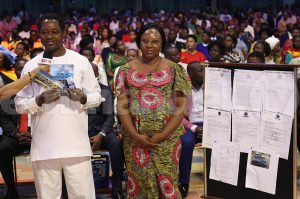 As of today, Benedict Mbam is of a professor of computer science and provost of a college of education in Ebonyi State, Nigeria. Before he received the grace to attain this height, however, the academic had suffered career stagnation for no less than seven years. Having reached the position of senior lecturer in 2004 at Ebonyi State University, he was supposed to have become a professor just about six years later. In reality, by 2012 he was still a senior lecturer, even though he had all the requisite qualifications. He decided to seek God’s help. After receiving prayers as well as The Morning Water and Anointed Stickers, he returned home. Only a few months after, the then Dr. Mbam was appointed Director of Academic Planning, a position meant for professors. The next year, 2013, he moved to a federal university, where he was appointed Head of Department and later that same year appointed professor. In 2014, his former university also declared him a full professor. In 2015, he got elected as Dean of Applied and Physical Sciences at the new university. In 2017, he also got elected to the Governing Council of the university and became a member of two powerful university committees. This year, 2019, Professor Mbam was appointed by the Ebonyi State Government as the Provost of the Ebonyi State College of Education. Thanking God for what He has done, Professor Mbam testified that he is now more devoted to God. He advised people to have faith in God and run to him for solutions to their problems.

FREED FROM THE PAINS OF KNEE ARTHRITIS AND DISC HERNIATION

Mrs Catherine Ereyi, a Nigerian living in the USA, had visited The SCOAN for divine healing for disc herniation and arthritis of her left knee. For 12 years, she had explored all medical avenues to no avail. 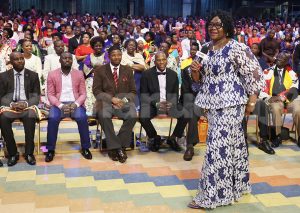 With her work requiring constant driving and climbing of staircases, Mrs Ereyi struggled through her pains, many times crying on her bed while watching Emmanuel TV. Last Sunday, God’s anointing located her as the man of God touched and prayed for her, in the mighty name of Jesus. After the touch and prayer, she said, “I got up and became very light.” She added during her testimony on Sunday, “You can see my gait is better now.”

DELIVERED FROM UNCONTROLLABLE URINATION AND BEDWETTING AFTER WORD OF PROPHECY 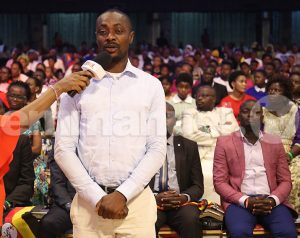 Six years ago, something happened to Mr. Abraham Ugbede, a Nigerian living in South Africa: Suddenly, he could no longer control his urination and started bedwetting every now and then, so he started using pads, to save himself from embarrassment. Two weeks ago, he visited The SCOAN and the Holy Spirit spoke on his case through Prophet T.B. Joshua. After the word of prophecy and prayer, Mr. Ugbede received his perfect healing. On Sunday, he testified to the Lord’s power in his life. He told of how the condition had prevented him from getting married, even as he confirmed that his urination has now normalised and he no longer bedwets. He also said that his blood pressure has also become normal. “Don’t allow your focus to be derailed and God will meet you at the point of your need,” he advised the congregation.

“YOU CAN’T UNDERSTAND BUT GOD IS MY WITNESS!” 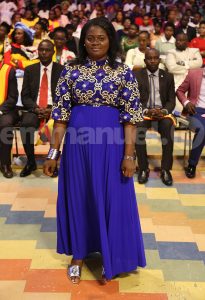 Miss Jennifer Kobo used to bleed and experience pain until two weeks ago, when a word of prophecy located her as Prophet T.B. Joshua prayed for the congregation in The Arena of Liberty. For three years, the Benue State indigene had lived with the discomfort of her condition until she received her healing during the Mass Prayer. “Oh, God, forgive my sins!” she had pled as the prayer session began, her body hurting as the blood gushed out. “You can’t understand but God is my witness,” Miss Kobo testified as she ran out of words to express her gratitude to God for healing her. She advised people to seek God’s forgiveness as they approach Him to heal, deliver and bless them.

Mr. Clement Mbeh, a Nigerian from Cross River State, had woken up on the 2nd of July 2018 with severe discomfort in his stomach. He dashed to the toilet but could hardly get anything out. He ran to his doctor, who sent him for a test. It turned out that his prostrate had been enlarged. The PSA measurement –  a diameter of 25.7! He was advised to fly down to India immediately, lest his case become cancerous. 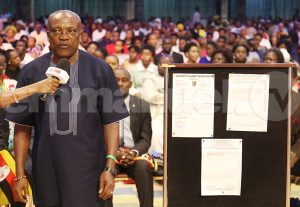 However, in the company of his children, Mr. Mbeh chose to visit The SCOAN in late July. To them he had declared his healing after a touch by Prophet T.B. Joshua, in the mighty name of Jesus. Upon returning home, Mr. Mbeh went for another test and, to his amazement, the PSA had shrunk back to a diameter of 4.4! “I have no more pains in my abdomen and I urinate freely now,” he declared during his testimony last Sunday. He advised people to trust in God, with whom everything is possible.