LOVE FOR YOUR NEIGHBOUR - The Synagogue, Church Of All Nations - SCOAN - Prophet T.B. Joshua (General Overseer) Skip to content 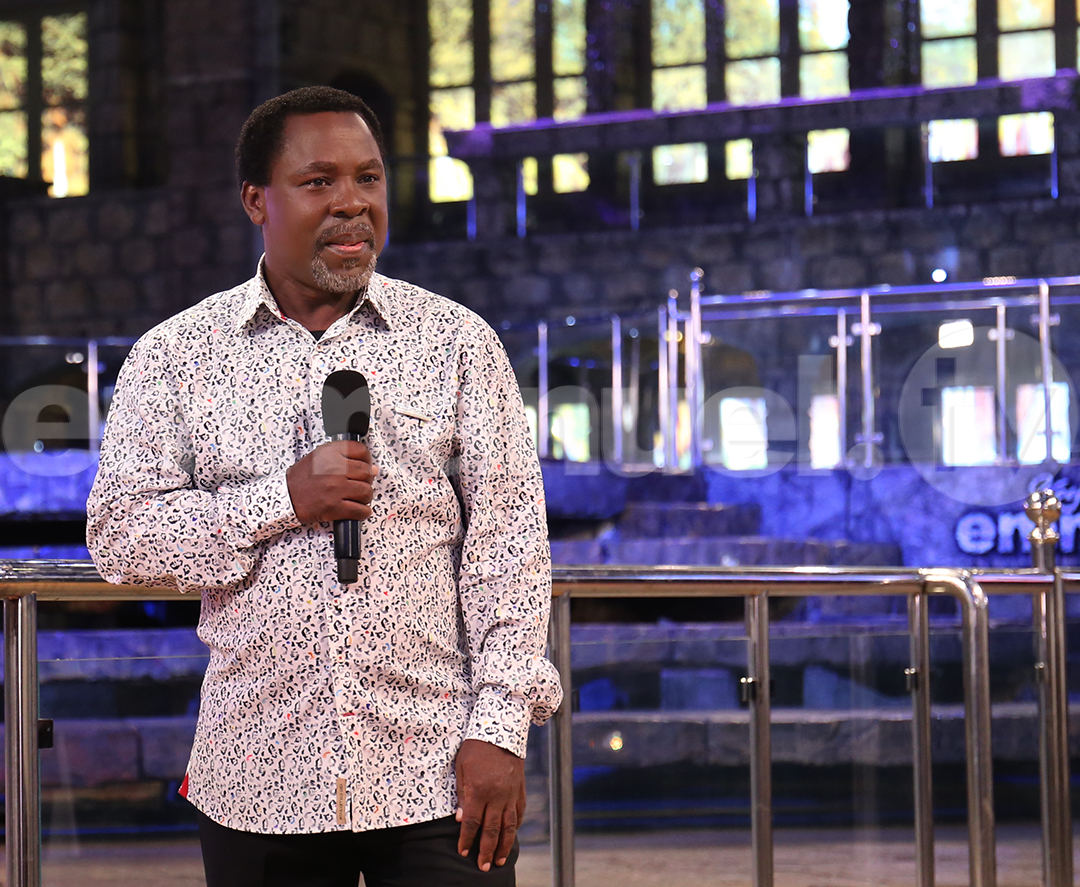 Less than 24 hours after God moved mightily through the flyDSA Arena in Sheffield, UK delivering captives, healing the sick and uplifting His children in The Emmanuel TV UK Revival, dawn broke on The SCOAN Sunday Service. The anointing flowed in torrents as The SCOAN Choir called down the Heavenly host with songs praising Yahweh and the congregation got a boost to their faith as they watched footage from the revival. The forces of Heaven showed no mercy to the forces causing pain, sickness and setback in the lives of God’s children as Prophet T.B. Joshua ministered in the power of the Holy Spirit throughout the course of the service.

The man of God spoke calmly and truthfully to the congregation as he entered the altar. Thanking God for glorifying His name during the one-day revival in the UK, Prophet T.B. Joshua noted that, even though a prophet may have no honour in his own home, The SCOAN has been given the commission of promoting love throughout the world. “Love for your neighbour meets hindrances, breaks down all barriers, dissolves prejudice, misunderstanding and suspicion.” Quoting from 1 Corinthians 13: 13, he explained that genuine love for our neighbours is expected if we profess love for God. “If you have all knowledge and ability but have no love, you are nothing. You cannot love God without loving your neighbour… If you love many people but there are some you do not love, that is discrimination in love – your love is nothing.”

“Let us love one another, irrespective of religion and race. Let us love one another, for love comes from God.” Such love, he said, will manifest in our showing care for the sick and needy, even as we give of our time and resources to others. “How many of your neighbours are on your daily prayer list?” he asked reflectively, adding, “It is when you begin to value your neighbour that you can value God”.

The man of God stressed the need for us to show compassion to others and avoid being selfish in our thinking and actions. In particular, he said it would be more fruitful to give to the truly needy than to people from whom we can gain something material in return. “What you do to your neighbour will determine whether your deliverance will be permanent. If you are healed here of affliction, it is not yet over. What you do to your fellow man out there will determine whether your healing will be permanent.”

Prophet T.B. Joshua then led the congregation and viewers of Emmanuel TV into the realm of prayer, releasing words of prophecy to those seated around the congregation and delivering a power prayer of freedom to the captives. “You cannot leave here and remain the same,” he professed. “Receive your deliverance, in the name of Jesus!” The presence of God moved tangibly through the congregation as people were loosed from the bonds of satanic attack and healed from their sicknesses. Indeed, it was a service like no other as the anointing arrested every negative spirit in the arena of liberty and brought light to the lives of those connected by faith to Jesus Christ.

Be encouraged in your faith as you share in the testimonies of lives transformed in the arena of liberty: 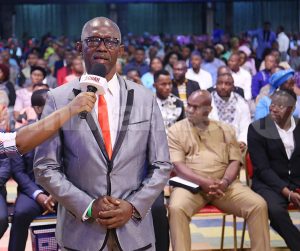 “The problem that brought me to The Synagogue, Church Of All nations is the problem of a stiff neck due to cervical spondolysis,” said Pastor Alan Kwesi, a Ghanaian. Ten years ago, he said, he suffered an accident that caused him excruciating pain. After their diagnosis, the doctors had ended up giving him a neck collar and several medications to ease his pain. For 10 years the pastor had borne his condition until he could take it no more. Although a man of God himself, he thought it wise to seek God’s face through other servants of His. At The SCOAN he received prayers in the mighty name of Jesus. Said he during his testimony on Sunday, about how he had felt during the prayer session, “It was as if something was massaging my neck, something like an ice pack”. Continuing, he said it was “as if the prophet knew exactly where I was feeling the pain because he held me there as he prayed for me. I became free afterwards,” Pastor Kwesi said, thanking God. Now, he can carry out the work of preaching even more effectively, as he has now been delivered from the lumbar problem that he believes was a family yoke. 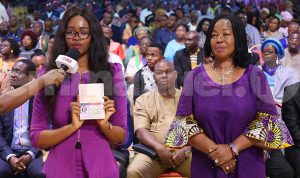 “What is your business with medicine?” the prophet had asked her. “I’m a doctor,” she answered, somewhat in amazement. Then he told her he could see that her ambition was being thwarted. He later prophesied victory for her, in the mighty name of Jesus. That was in February 2019. To confirm the prophecy, medical doctor Amaka Omenyi returned to The SCOAN last Sunday, with her mother, to testify to the Lord’s goodness in her life. “I needed a breakthrough in my life, especially in my career as a medical doctor and also for personal deliverance,” she stated as she began her amazing testimony. She spoke of how she had failed several times in the past as she sought to go abroad for specialist training in internal medicine. For one reason or another, she kept facing rejection from the schools, despite sending in hundreds of applications. As a fan of Emmanuel TV, her mother’s favourite channel, she believed she would soon receive her own miracle. It was in that spirit that she had come to the arena of liberty in February. True to the man of God’s prophecy, Dr Omenyi’s admission application was successful this time, as she was admitted to begin her specialist training at an institution in Pennsylvania, USA. Just last month, she got her US visa without any hassle, to the glory of God. After her three-year training she will emerge as a consultant in internal medicine. Rejoicing, Dr Omenyi advised people to go to a living church for solutions to their problems, realising there is no challenge that God cannot help them to overcome. 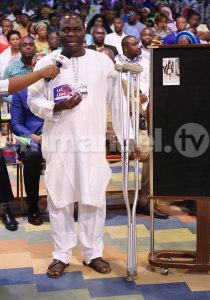 Mr Victor Maliki is a Nigerian aviation engineer. While at work, he suffered an ankle dislocation that left his right foot dangling. After bandaging his legs, doctors handed him a pair of crutches to enable him to walk. Concerned by his condition, a friend gave Engineer Maliki one of The SCOAN anointed stickers – the Let Love Lead Sticker. Using a rubber band, he held the sticker in place around the hurting ankle. To his amazement, he began to feel sensations around the foot as it moved on its own accord. Soon after, he slept off on a mattress at work. Waking up, Engineer Maliki was oblivious of the fact that he had been using crutches only a few hours earlier. His ankle had gone back to position and he could walk and exercise his body without needing the crutches anymore. During his testimony in church on Sunday, he advised everyone to seek God for solution to their problems. 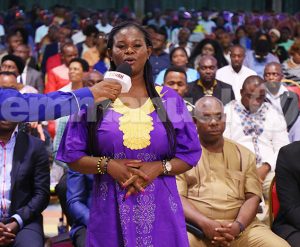 Three years ago, Ms Naomi Maduakolam had admired the apparent glamour that reflected in her friend’s way of life so she asked her the secret to her flashy lifestyle. Her friend’s answer: prostitution. That was how Ms Maduakolam began her journey into the ‘world’s oldest profession,’ sometimes servicing up to five men a day. Their meeting points? Brothels and nightclubs all over Nigeria. During one of her night outs, a ‘client’ had drugged her and taken away her phone and other possessions. As she woke up about 48 hours after, she realized she could have easily been used for ritual purposes. From then on, she felt the need to quit the business but her flesh had become too weak to resist and her material needs weighed heavily on her mind. Well, last Sunday, at The SCOAN, God located her through a word of prophecy from His servant, T.B. Joshua. As ordered by the Holy Ghost, the prophet urged Ms Maduakolam to come out and renounce prostitution. After a bit of hesitation, she did and to the glory of God, she came to testify in church last Sunday, thanking God for renewing her mind. She confirmed that she no longer had the urge to engage in prostitution and her lust for material possessions was a thing of the past. She advised people bound in the bonds of prostitution to follow her example, quit the addictive lifestyle and follow God.

As we appreciate God for His mighty works in our midst, we remember the Words of wisdom spoken through His servant, “God gave you fitness because of people who are not fit. God raised you because of those who are on the sickbed. Until you extend your love to people like that, you cannot live beyond human destruction.” May His Words penetrate deep into our hearts and overflow in our actions, in Jesus’ name.