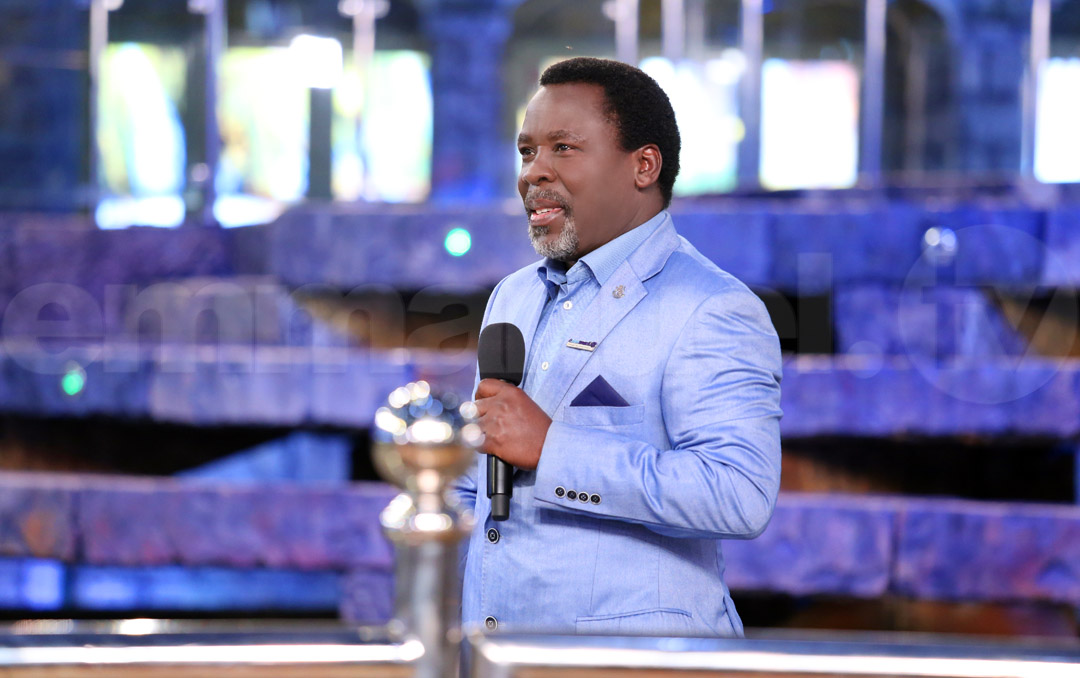 ANOTHER SUNDAY OF SOUL-LIFTING MINISTRATION, AMAZING MIRACLES AND INSPIRING TESTIMONIES

The SCOAN Choir began their ministration by urging the congregation not to fear or murmur since our Lord Jesus is always with us. Exalting the Creator of Heaven and earth, they asked Him to rain His power of healing, deliverance and freedom on the church. And the Lord did so in a mighty way indeed!

Man of God, T.B. Joshua radiated God’s grace and anointing as he stepped on the altar. As directed by the Spirit of God, he spoke a few words of exhortation to the church on the need to believe in God’s infinite capacity to heal, deliver and bless His children. Thereafter he proceeded to the healing session, before the laying on of hands. And God again moved mightily among the congregation. 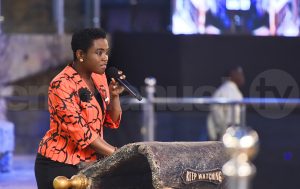 In her message, Yinka advised the church to STOP FIGHTING THE WRONG BATTLE. She read from Psalm 51:3-4, Luke 18:9-14, 2 Corinthians 7:10 and 2 Chronicles 7:14 and the thrust of her message was that Christians should stop blaming others and focus more on their standing with God. She encouraged the church to flee from sin and to admit their wrong so that they can break the barrier between them and God. She then told them to ask for divine mercy and release from sin’s power, the conditions for obtaining God’s mercy.

Four years ago, Mrs. Maria Ifeanyichukwu was about to fly back from Abuja to Los Angeles, California, USA when she got injured on the escalator. 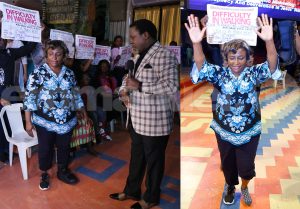 When she arrived in America, doctors gave her a moon boot because of her fractured ankle, informing her she would need surgery if her ankle bone failed to heal within four weeks. It didn’t – and in fact a year ago she fell into a pit, further aggravating the ankle pain. She refused surgery, having been following Emmanuel TV on YouTube and encouraged by the mighty works of miracle going on in The SCOAN. She then came to the church two weeks ago. After prayers in the mighty name of Jesus, she instantly received her healing.

On Sunday, she came before the congregation to testify of the Lord’s goodness, having parted ways with her moon boot. Demonstrating her healing by moving swiftly on the aisle, she advised people to seek God first and see Jesus Christ as the answer to their problems.

DELIVERED FROM SPIRITUAL HUSBAND AND SPIRIT OF BEDWETTING

Her mother had been ‘married’ to a spiritual husband whose remnant food she used to give to her real-life children. Little did young Vivian know that by partaking of that meal she herself had become a wife to her mother’s spiritual husband, who further afflicted her with bedwetting. However, Vivian’s day of deliverance came a fortnight ago when she attended the Living Water Service at The SCOAN. 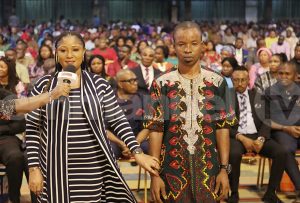 After stepping on the altar and drinking of the Living Water, Mrs. Vivian Orlando was arrested by the Holy Spirit, who exposed the spiritual husband that had been tormenting her and she received her deliverance. On Sunday, she told the church of how she had told off the spiritual husband when he had come to threaten her with death that same Monday night. Since then, she said, she has been free from his grip and no longer bedwets. She encouraged people to seek the face of God for divine solution.

Forty-six-year-old Haitian nurse Mrs. Ermithe Bornelus had been deaf for 25 years. The condition affected her work severely and she could barely communicate with colleagues. She also had asthma and an object moving around her body. 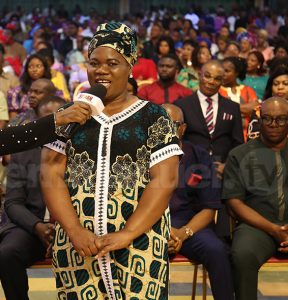 In time, Mrs. Bornelus lost her sense of balance, not being able to detect the source of sound despite her hearing aid. Having been told by her doctors that surgery would achieve nothing, she ran to God. 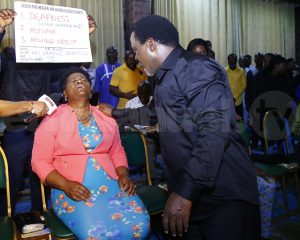 At The Arena of Liberty two weeks ago, she received prayers from Prophet T.B. Joshua in Jesus’ mighty name and her deafness vanished! Testifying last Sunday, she told the congregation how God had also flushed out the moving object in her stomach, in addition to healing her of asthma and arthritis. To God be the glory! 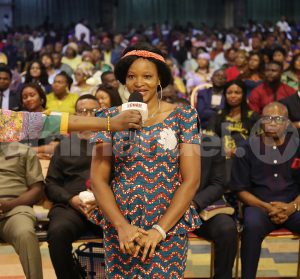 For 12 years, Mrs. Tchandikou Damba, a Togolese, had suffered the shameful problem of bleeding. She had kept it a secret, although there had been occasions when strangers noticed her stains. In church two weeks ago, the man of God, T.B. Joshua, had spotted her and the Spirit of God had prophesied healing to her. “Go and check yourself,” he told her. She did and to the glory of God, the abnormal bleeding had stopped. During her testimony on Sunday, she thanked God for the grace available at The Arena of Liberty, The SCOAN as well as for the hospitality she enjoyed from the church. Her advice: “Don’t live without Jesus!”

HE RECEIVED HIS HEALING AT ‘THE FREE HOSPITAL’! 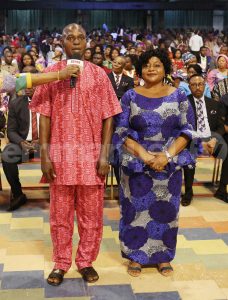 The doctors had diagnosed Mr. Aluga with osteoarthritis of the hip, knee and spine and they had told him he would be needing three million Naira for a full knee replacement surgery. However, the 57-seven-year-old Taraba State indigene had a believing sister who had promptly rejected the surgery suggestion, assuring him she would take him to a hospital where he would not have to pay any money. She was talking about The SCOAN. In search for a solution, he had visited many herbal and medical doctors all to no avail. 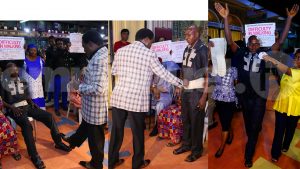 And when he eventually made his way to The Arena of Liberty, he experienced God’s touch. Not only did he receive his healing, he also got a word of prophecy from Prophet T.B. Joshua concerning a land. The prophet told him he had stepped on poison on the land and that his scrotum was being affected, making it hard for him to urinate. Since his healing, he has parted ways with his lumbar corset and he can walk again without any pain. On Sunday, he praised God for his healing and advised people to believe in God’s healing power.

MRS TSE WUN TING IS DELIVERED FROM SPIRIT OF DIVORCE, DEPRESSION AND SUICIDE 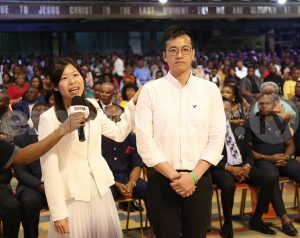 Mrs. Tse Wun Ting, from Hong Kong, had found herself troubled by the spirit of divorce, depression and suicide. Although she had a loving, caring husband, she always felt unloved and despised by people and would threaten to divorce her husband. She knew something was wrong and that it required a spiritual solution, so she sought God’s face at The SCOAN. 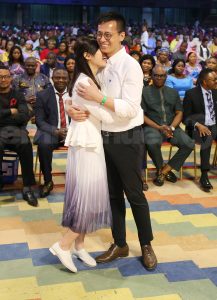 After prayers, she felt a newness in her person and by the time she returned home she had become a changed person. No longer was she worried about what people thought of her or did to her and the thoughts of divorce and suicide had vanished totally. Mrs. Ting’s husband advised people to follow God and not go for divorce. On her part, Mrs. Ting advised people to leave their problems to Jesus. 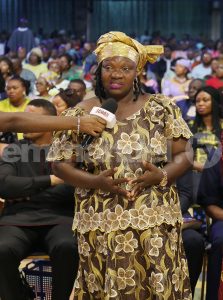 Last week at The SCOAN, a word of prophecy had located Mrs. Theodora Emelia, a Sierra Leonean: “Something strange happens to you; you suddenly find yourself bedwetting at night,” the Spirit of God spoke through the man of God, T.B. Joshua. Confirming the prophecy, Mrs. Theodora said the condition had brought backwardness, poor health and shame to her life. It was even beginning to affect her marriage, as she and her husband would quarrel over every minor issue. For years, she had managed to hide her problem from people but one day her secret leaked into the hands of a God-believing aunt, who thereafter took her to The SCOAN for prayers and she received her deliverance not only from the spirit of bedwetting but also spiritual husband. 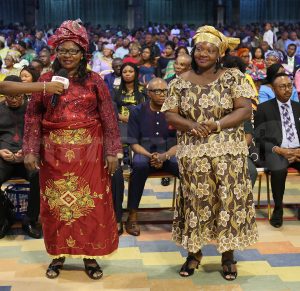 Mrs. Theodora’s aunt advised people to seek God at The SCOAN, while Mrs. Theodora herself admonished people that no problem is bigger than God.

YOKE OF INFERTILITY BROKEN AFTER MINISTRATION OF NEW MORNING WATER 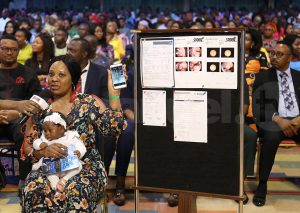 Mrs. Nomsa Melekwe, a South African married to a Nigerian, had realised that her problem of infertility was more spiritual than medical. She took her case to God after she had failed to get pregnant four months after a surgery meant to remove her ovarian cysts and clear her tubal blockage. The doctors had also found water in her ovaries. Blessed with the New Morning Water after her visit to The Arena of Liberty, Mrs. Melekwe began to pray earnestly as she ministered the Morning Water consistently. And God heard her cry, as she fell pregnant even though doctors had said she would need another surgery to help improve the quality of her eggs.The Melekwes had been encouraged by the testimonies shared on Emmanuel TV. Today, to the glory of God, Mrs. Melekwe is the proud mother of three-month-old baby ‘Ogechi Praise Melekwe’. During her testimony on Sunday, Mrs. Melekwe said she had been shocked when her doctor confirmed her to be pregnant, adding that even the doctor herself was surprised. “I’m carrying my testimony today,” she said while advising women having similar experience to take their case to God.

Mr. Francis Obuseh, a 44-year-old, had burst a blood vessel in his brain, leading to a partial stroke. He had suddenly found himself unable to walk anymore as he made to climb the stairs into his home after a jogging session. 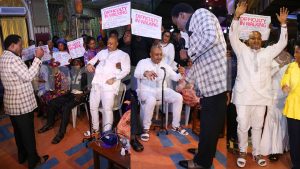 Unable to move without a walking aid, Mr. Obuseh became a burden to his family, especially his wife, who had to abandon her business and take up all his responsibilities. In faith, the couple came to The SCOAN. Before praying for him, Prophet T.B. Joshua had given words of prophecy on Mr. Obuseh’s life, all of which he confirmed as he testified in church on Sunday. 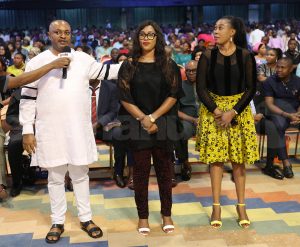 Although already given up for a hopeless case by friends, Mr. Obuseh had refused to give up on God and he eventually received his healing. Mr. Obuseh advised people not to fear but go to God in faith. On her part, Mrs. Obuseh encouraged the congregants and viewers all over the world never to give up on God.

NIGERIAN BUSINESSMAN BACK ON HIS FEET AFTER SPINAL MUSCLE SPASMS 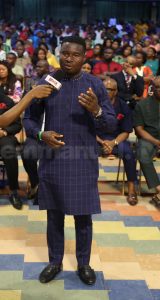 Thirty-eight-year-old Mr. Chinedu Eneoko, an Abuja-based Nigerian from Enugu State, had suddenly been struck with spinal muscle spasms as he was about to go for a holiday in December 2018. A businessperson, Mr. Eneoko had been unable to do his transactions effectively, as his lumbar corset offered minimal comfort. He took his case to God at The SCOAN, where he received prayers from the woman of God after which Mr. Eneoko was healed instantly. Testifying in church on Sunday, he glorified God as he narrated how he received his healing. After demonstrating his perfect healing, he advised people to exercise faith as they approach God for solution to their problems.