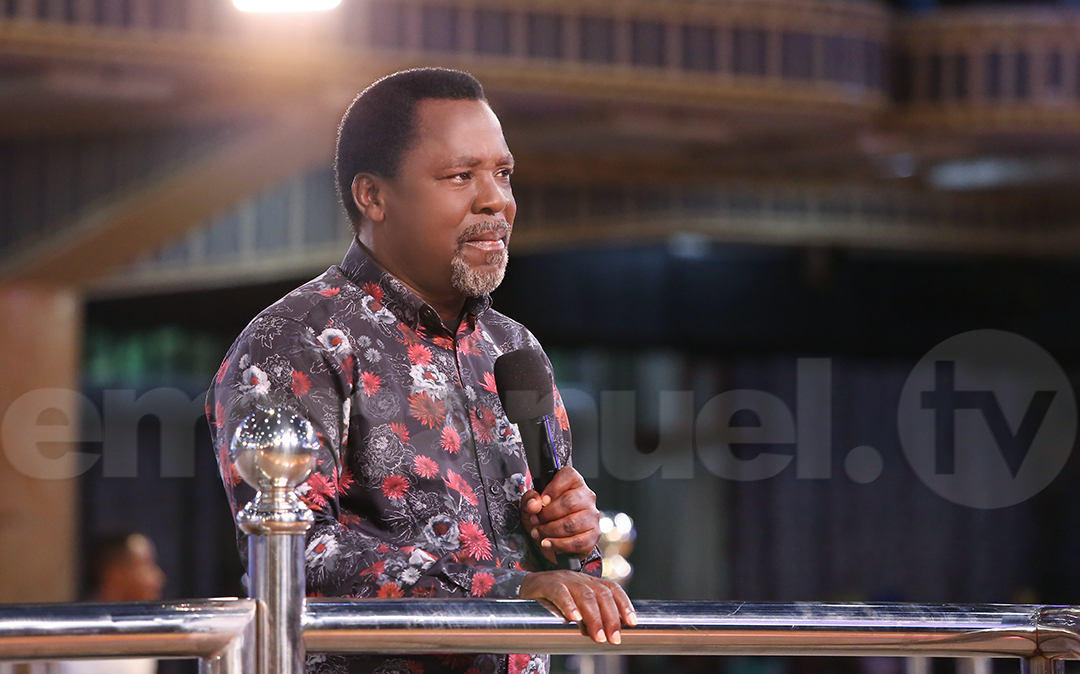 It was Easter Sunday, so The SCOAN Choir began with a song celebrating Christ’s victory over death. And as undeniable manifestation of the power of resurrection, The Arena of Liberty flowed with the anointing of deliverance, healing and blessings.

“We are living in the end times,” Prophet T.B. Joshua began his Easter Sunday message entitled FEAR CHANGES FOCUS, adding, “and there is a manifestation of the spirit of fear all over.” In a highly interactive sermon in which he later asked some worshippers to sum up their understanding to him, the man of God read from Luke 22:39-43, the passage in which Jesus asked for “the cup” to pass over Him even as He asked for God, the Father’s will to be done. 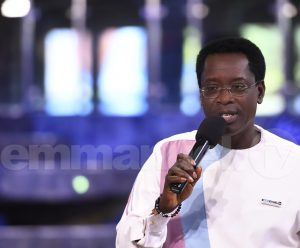 He said, “The good news is that we have a Friend, the Holy Spirit, who can help us to fight this monster called fear”. He cited the case of our Lord Jesus Christ, who received strength from the Holy Spirit while in the Garden of Gethsemane. After illustrating how fear tends to rule our hearts and prevents us from reaching our full potential, the prophet asked worshippers to find out God’s will in their lives in every situation.

Racine spoke on the topic, A LIFE ANEW. Citing the Book of Romans 6:4-8, Racine spoke extensively on the power of Jesus’ resurrection noting that “to be born again, you must first die with Christ and resurrect with Him.” He noted the importance of breaking the link with our past and dwelling on the future, hence the reference to Lot and the man at the pool of Bethesda, among others. Racine therefore urged the congregation: “Each time you want to focus on your future the devil is already there, always there to remind you of your unworthy past in order to provoke your guilt, your fear and to hinder your future. Don’t look back.”

“IT WAS LIKE 20 BREAKTHROUGHS IN ONE!” SAYS MAN HEALED OF EPILEPSY 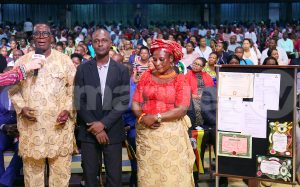 A Nigerian from Edo State, Mr Nosa Ikhimiukor, was all smiles when he came to testify of the Lord’s goodness in his life, accompanied by his parents. In 2005, as he matriculated, he suddenly found himself experiencing epileptic seizures, sometimes having as many as five of them in one day. Exasperated about his condition, the doctors suggested he opt out of school but his father refused the suggestion, urging the doctors to help alleviate his child’s suffering. 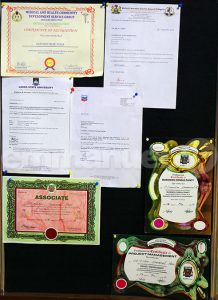 Mr Ikhimiukor’s seizures always left him depressed and in pains. Shamed by his condition, he kept to himself as he battled the aftermath of nightmares. One day, a friend told him about Emmanuel TV and the young man tuned to the channel. Seeing a case like his on TV, Mr Ikhimiukor resolved to attend The SCOAN. While there, God’s power fell on him as the man of God, Prophet T.B. Joshua prayed for him and he received his instant healing. Several months down the line, Mr Ikhimiuokor is still basking in the total freedom from epilepsy which the Lord had granted him. He has since regained his vibrancy and vitality. He has also begun to witness amazing career breakthrough. Now released to him are the professional certificates which the medical council had withheld from him because of his condition. Also released to him are his certificates in business consultancy and project management. He has also received certificates of recognition from renowned organisations. He advised people to believe in God.

HE ONLY WANTED A CHILD BUT GOD GAVE HIM MUCH MORE! 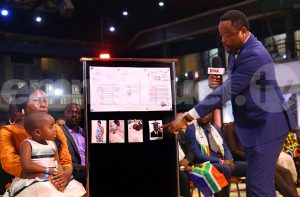 Mr Manuel Okomo, an Equatorial Guinean, had come to The SCOAN because of the problem of infertility. For eight years, his wife had been unable to fall pregnant, so the couple sought God at The SCOAN, with the wife’s brother also tagging along. As God had designed it, the three of them received a touch from Prophet T.B. Joshua, in Jesus’ name and as they returned home, good things began to happen in their lives. First, Mrs Yolanda Okomo conceived in the same month she visited The SCOAN and had a baby girl nine months later. Second, Mr Okomo witnessed incredible career elevation as he was appointed medical Director of his country’s largest teaching hospital. He was also appointed on the board of the largest international bank in West Africa. Third, his in-law, who accompanied them to The SCOAN that fateful day got a university scholarship in Barcelona, Spain and graduated as the best student in his set. Fourth, Mrs Okomo also got a reputable job. Testifying during The SCOAN Sunday Service, the Okomos, clutching their ‘miracle’ child Rebecca, advised people to have faith in our Lord, Jesus Christ. 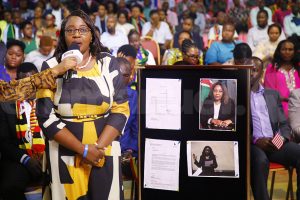 In 2014, when she came to The SCOAN for prayers, Mrs Elsie Nghikembua, from Namibia, had been battling with career stagnancy. This much was revealed to God’s servant, Prophet T.B. Joshua, who prophesied that the woman had been getting passed over for promotion at her workplace. Though due for a promotion in her organization, Mrs Nghikembua was surprisingly ignored when an opportunity showed up. Although she continued her work diligently, she suffered a high level of opposition in the system. She finally threw in the towel in 2016 when it was evident that she had no career future in the said company. she then applied for a position as Election Commissioner. Before submitting her application, she ministered The New Morning Water which she had received during her visit to The SCOAN on her documents. To the glory of God, she was one of the five selected for the position by the Namibian president. Again, in 2018, she submitted her application for the position of Assistant Director of Operations in the University of Namibia Business School. She again ministered the New Morning Water and she emerged as the successful candidate among close to 400 applicants. Before ending her testimony,  Mrs Nghikembua informed the church that she had first been to The SCOAN in 2009, with her husband. She testified that, on returning home, they were blessed with a daughter who will be turning nine years old later this year. She advised people to keep their eyes fixed on Jesus and He will see them through.

DELIVERED FROM SEVERAL YEARS OF BEDWETTING! 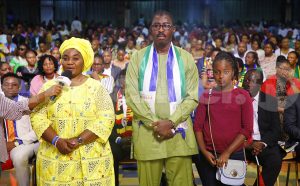 For a good 42 years of her life, Mrs Ernestine Williams was a bedwetter, something she had been battling with since she was seven years old. A Sierra Leonean living in Kenya with her husband, Mrs Ernestine had had to live with this embarrassing situation until last week, when she received her deliverance, in the mighty name of Jesus, at The SCOAN. Regarding the prophecies she received from the woman of God, Mrs Williams confirmed that her late grandmother had been a worshipper of marine spirits and that she was named after her grandmother. She also confirmed that her sister suffered the same problem of bedwetting. Concerned about her daughter’s condition, Mrs Williams’ mother had taken up the matter, visiting spiritualists in Guinea together with her daughter, all to no avail.

Since her healing last week at The SCOAN, Mrs Williams has literally kept a clean sheet, just as her spirit husband has been banished forever. Glorifying God for her healing and thanking her husband for not abandoning her even though he had discovered her condition before marrying her, she advised people not to ignore their partners and to run to God for solutions to their problems. On his part, Mr Williams said, “My wife’s strengths far outweigh her weaknesses; I do not reject her.” He urged people not to judge their partners’ character but to find out God’s reason for bringing them together. 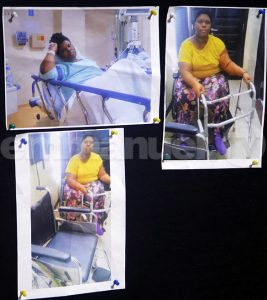 A few months ago, Miss Gloria Tagoe, a 21-year-old Ghanaian living in Qatar with her mother, had suddenly found herself afflicted with the problem of bilateral deep vein thrombosis of the lower limbs. The condition left her unable to walk without the aid of crutches and a special pair of socks. Despite seeing medical experts, Miss Tagoe did not get better and had to drop out of university in Ukraine. At a point, she couldn’t breathe and had to be placed on oxygen owing to a blood clot that reached all the way to her lungs and at a point, she was totally bedridden. 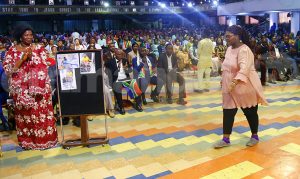 Needless to say, she couldn’t bathe herself not to talk of cook her own meals. Her mother decided to bring her to The SCOAN. After prayers from the woman of God, in the name of Jesus Christ, Miss Tagoe stood up and walked again for the first time in a very long time. As she took her first steps again, her mother exclaimed in excitement, screaming thanks to God in utter joyousness. Testifying in church the following Sunday alongside her mother, Miss Tagoe told of how her healing had started even as she began watching Emmanuel TV right in her country of residence. She walked around on the aisle as she shared her testimony with the world. She advised people to have faith in Jesus Christ, the Healer.