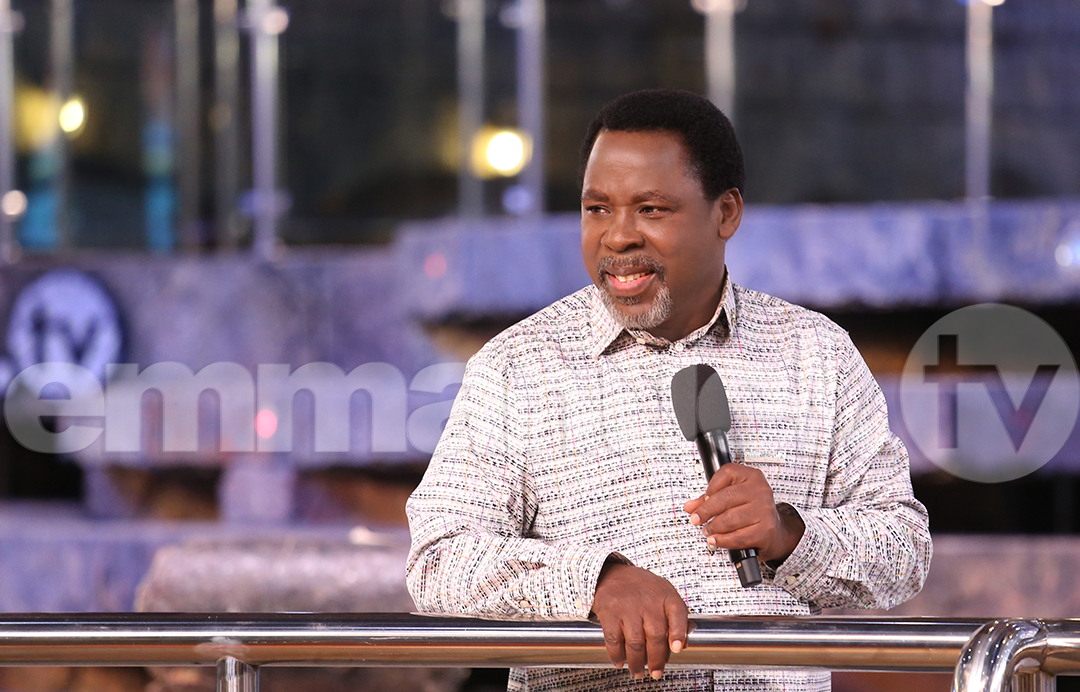 The SCOAN Choir began the service on a mellow worship tone: “Holy Spirit breathe in me/That my thoughts may be holy/Holy Spirit act in me/That my words be holy.” As the lyrics sank into the hearts of the congregation, the Spirit of the Lord came down to dwell among them. And as God’s power rained down on the worshippers, healing, deliverance and blessings were commanded on them. 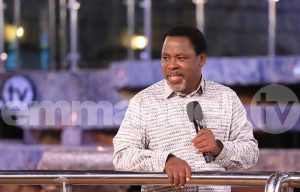 In his sermon titled, The Holy Spirit Never Works Alone, Prophet T.B. Joshua taught yet again about the need to make our spirit act on the Word of God. Reading from Romans 10:9, he paid special attention to the idea of declaring with our mouth and believing in our heart so that we can attain salvation, the only guarantee to maintaining our deliverance, healing and blessing. The prophet said, “Our heart is the contact point, the communication point between the material and immaterial worlds.” Consequently, as true Christians we are denied the right to hold offence against others since holding offence will prevent us from having a free heart. Emphasizing the importance of maintaining a free heart, the prophet said, “The Holy Spirit never works alone. His activity is always in cooperation with you”. Equating man’s heart with his spirit, Prophet T.B. Joshua said our heart will be useless as an instrument for contacting the Spirit of God when we lack the Spirit’s leading as sanctioned by the Scriptures. He therefore urged the congregation to ask God for the grace not to be ignorant of their faith even under pressure of temptation, affliction, sickness or disease. He also prayed for God to make them channels of light, love, justice, humility, obedience and faithfulness. 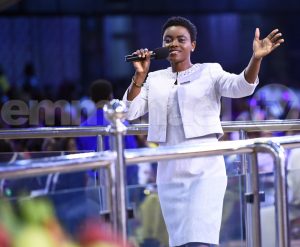 In her own Palm Sunday message, entitled ‘Living above the Senses To Conquer’, Yinka began by noting there are two sides to life: the natural and the spiritual. The natural, she said, is the realm where people’s responses to their situation are informed by what they see, hear or feel – that is, the senses. The spiritual realm, she noted, is where man is required to look beyond his senses, no matter his situation. With her proof text taken from Mark 5:36-41, Yinka identified the lack of faith in the Word as the reason why many fail to receive from God, why they are unable to enter into their “revival, renewal and redemption.” She also illustrated her message with Acts 17:28, Matthew 21, Genesis 3:12, Psalm 8:2, 2 Kings 5:9, John 11:39 and 2 Corinthians 4:16. In summing up her message, she said: “If you are ruled by the Word of God then you will live above your senses. All you need to do is begin to feed yourself with the Word of God in your heart.”

AFTER ONE YEAR OF SEVERE PAIN, NIGERIAN QUEEN WALKS AND STANDS UPRIGHT AGAIN

Mrs Titilayo Babalola, the wife of HRM Abraham Babalola, a traditional ruler in Ekiti State, Nigeria, had come to The SCOAN seeking God’s mercy for her condition of difficulty in walking owing to degenerative arthritis of the spine. 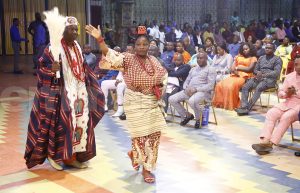 For over a year, the Queen had been unable to stand upright or sit properly, and even the slightest movement was torment for her. 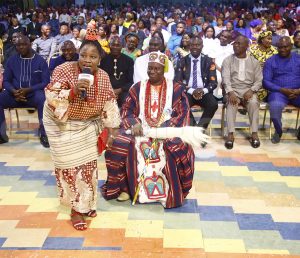 As such, she constantly needed help to drink water, eat and bathe. After prayers by man of God TB Joshua, the Queen rose to her feet and stood upright once again. While testifying in church alongside her husband, Mrs Babalola could not hide her excitement as she showed off the pace in her feet and the nimbleness of her gait. She advised people to have faith in God and to believe He will answer their own prayers as well.

WOMAN DELIVERED FROM 27 YEARS OF BEDWETTING AND MARINE SPIRIT BONDAGE

Since her teenage years, 46-year-old Mrs Rosemary Ejiofor, a Nigerian residing in Capetown, South Africa, had been under the bondage of a stubborn marine spirit which felt entitled to her life and destiny. He would appear to her in street corners, asking her to come to him. 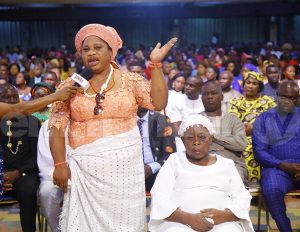 Native doctors tried all they could to sever her ties with the spirit but to no avail. The malevolent spirit always made her sick and even afflicted her with bedwetting once she secured admission to university. The spirit also ruined Mrs Ejiofor’s thriving restaurant business in Capetown and made her lose affection for her loving husband, who showed understanding all the way and paid for her trip to The SCOAN. After a touch by the woman of God, in the mighty name of Jesus, Mrs Ejiofor found the evil spirit in her confessing before departing from her life forever. During her testimony in church, Mrs Ejiofor spoke joyfully about her liberation from the marine spirit even as she thanked God for rescuing her from the bondage of bedwetting.

AFTER FOUR YEARS OF WRONGFUL DETENTION, BUSINESSMAN IS CLEARED OF ALL CHARGES AND RELEASED FROM PRISON

When, on the night of November 6, 2014, Chief Augustine Nwamba had gone out to the bar to celebrate the news that the ship carrying his best friend and business protégé’s cargo had just set sail from China, he did not know that night was going to be the beginning of his journey to prison for the next four years. 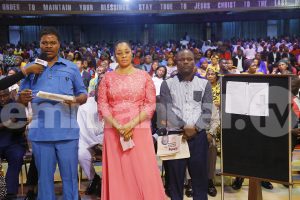 While Chief Nwamba’s friend was returning home that night in another car, he was shot and killed. Detectives suspected foul play on Chief Nwamba’s part, so they picked him up for interrogation and charged him to court for murder, together with those with whom he had gone out that night. Incarcerated while the trial lasted, Chief Nwamba faced the prospect of being sentenced to death if found guilty. In prison, Chief Nwamba had access to Emmanuel TV and, encouraged by the testimonies given at The SCOAN, he called one of The SCOAN prayer lines and stated his case.

Asked if he committed the crime, Chief Nwamba said he did not and the voice on the other end told him he would be freed soon if that was the case. To the glory of God, the court case suddenly turned in Chief Nwamba’s favour and he regained his freedom on March 15, 2019! Testifying alongside his wife and another friend who was also incarcerated with him over the case, Chief Nwamba advised people not to celebrate their success in worldly places. To God be the glory!

20 YEARS BLEEDING STOPS AFTER PROPHECY
When she turned 13 years old, Miss Princess Nongauza began to experience bleeding. At first she thought it was normal but the bleeding persisted as the years rolled by. She then resigned herself to fate, consoling herself that it was hereditary since her mother had also had it. Despite taking different pills to stop the bleeding and her normal period pains, Miss Nongauza felt no relief.

Now in her 30’s, the South African took her case to God. Last week, at The SCOAN, she received a word of prophecy about her condition. After Prophet TB Joshua prayed for her, he told Miss Nongauza to go and check herself. She did, and found that she had blood had dried up. 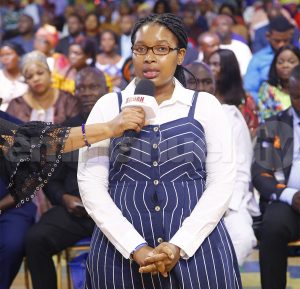 Testifying in church the following Sunday, she told of how the condition had made her lose self-confidence, as she always had to carry pads and visit the toilet constantly. “When the prophet touched me,” she said, “I felt a burning sensation and fell down.” Today, Miss Nongauza’s bleeding is gone for good. She advised people to see God as the only answer and not to tolerate abnormal situations in their lives.

PROPHECY BRINGS DELIVERANCE AND HEALING
Forty-eight-year-old Mrs Keamogetse Pelesane, from Botswana, sought God’s face over difficulty in walking due to degeneration of the lumbar spine; she also had a fractured wrist.

To help her, doctors gave her a body brace and a wrist brace, yet the last four years of her life had been filled with pain, moodiness and frustration. She came to The SCOAN. Once Prophet T.B. Joshua touched her, Mrs Pelesane began to thrash around vigorously as God’s power surged through her. 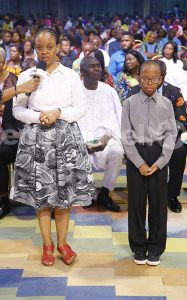 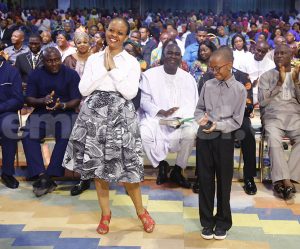 She also received a word of prophecy on an evil attack which used to force her to engage in pleasuring herself, leading to an injury in her private part. She confirmed the prophecy. Accompanied by her son during her testimony in church, Mrs Pelesane spoke passionately and excitedly even as she exercised her body energetically before the cameras. She urged the people of God to pray in faith all the time.

MEDICAL DOCTOR DELIVERED FROM SPIRIT OF SUICIDE
He is 42 years old and a medical doctor based in Kano State, Nigeria. Looking at him from the outside, one would not be able to guess that, deep down, he was suicidal. But the signs were there: the persistent moodiness, the need for isolation, the dysfunctional personality, the insomnia, the unending talk about death etc. Just two Wednesdays ago, he had tried to take his own life by hanging. 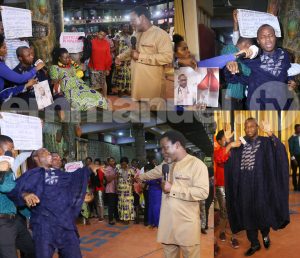 However, he was restrained by a voice which asked him to touch the TV set, which was tuned to Emmanuel TV. That was the story of Dr Oshiorenua James before he visited The SCOAN last Sunday. As part of his affliction, Dr James had the ability to see into the supernatural realm: at markets he would see spirits walking upside down and placing burdens on the heads of normal people. When the Edo State indigene, who was seated close to the door, felt the fire from Prophet TB Joshua who was praying for the person beside him, he tried to bolt but the power of God restrained him. 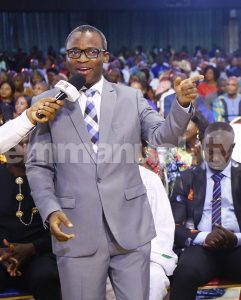 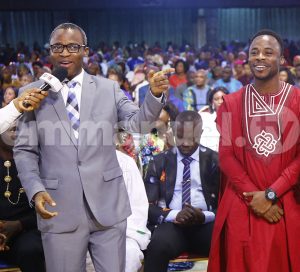 As words of prophecy located Dr James, three other worshippers were also arrested by God’s Spirit, which neutralised the powers of the serpentine spirit ruling their lives. Accompanied to the church for his testimony by his mother, brother and sister, Dr James narrated how he had experienced depression right from his medical school days and how the serpent had prevented him and his family from making headway in life. Since his deliverance, Dr James now sleeps peacefully and no longer sees strange things in the market or hear evil voices asking him to kill himself. Concluding his testimony, he urged the church to pray against the spirit of suicide among medical practitioners. He also advised doctors against neglecting the spiritual angle to illness.