THE MISINTERPRETATION OF NATURAL TALENTS AS SPIRITUAL GIFTS - The Synagogue, Church Of All Nations - SCOAN - Prophet T.B. Joshua (General Overseer) Skip to content 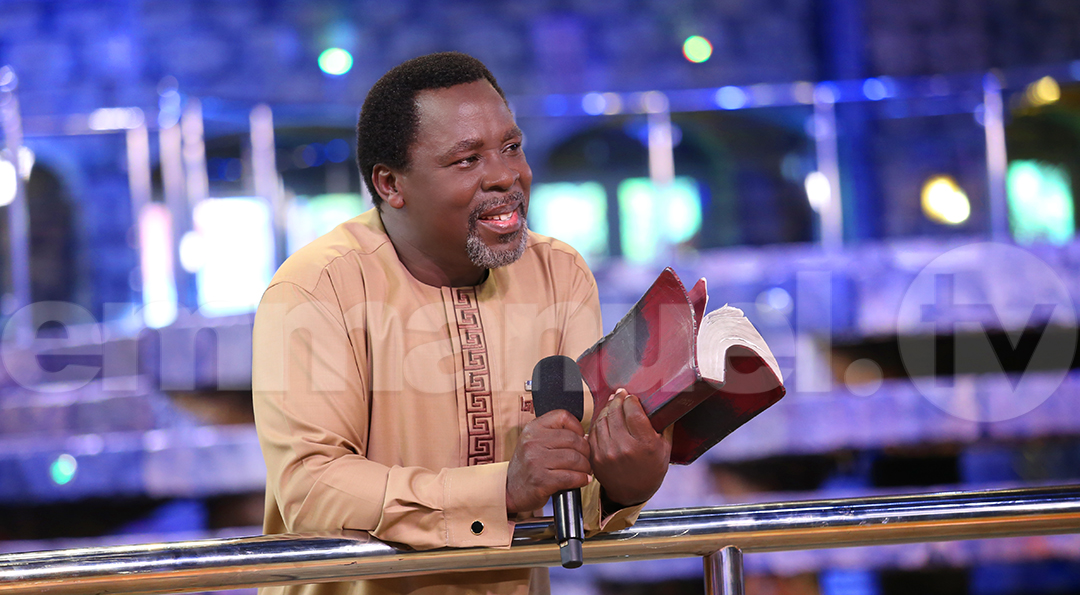 To kick off the service, The SCOAN Choir welcomed the presence of the Holy Spirit to come and dwell in The Arena of Liberty. Thereafter, they thanked God for His awesome and unexpected favour over the lives of worshippers. Having acknowledged God’s hand in the people’s lives, they sang of the need to live to praise and worship Jesus, the One whose blood saves, heals and delivers.

Man of God Prophet T.B. Joshua gave a powerful word of exhortation on “The Misinterpretation of Natural Talents as Spiritual Gifts.” In a message in which he taught the flock in love and humility, the prophet took his reading from 2 Chronicles 2:1-17, with particular focus on verses 13-14. He also read from 1 Peter 4:10-11 and 1 Corinthians 12:1-31, with verses 7-11 capturing the key message. Every human being, made as he or she is in God’s image, is endowed with certain natural talents, the prophet said. As such, the exhibition of talent happens irrespective of a person’s faith, profession or commitment to the things of God. Advising Christians to stop mistaking talents, which are natural, for gifts, which are necessarily spiritual, the man of God demonstrated how the Word is given life by the Spirit so it can bring about a new creation.

In February 2018, when the doctors told him he had colon cancer, Mr David Ogen would not have been very surprised. After all, for 25 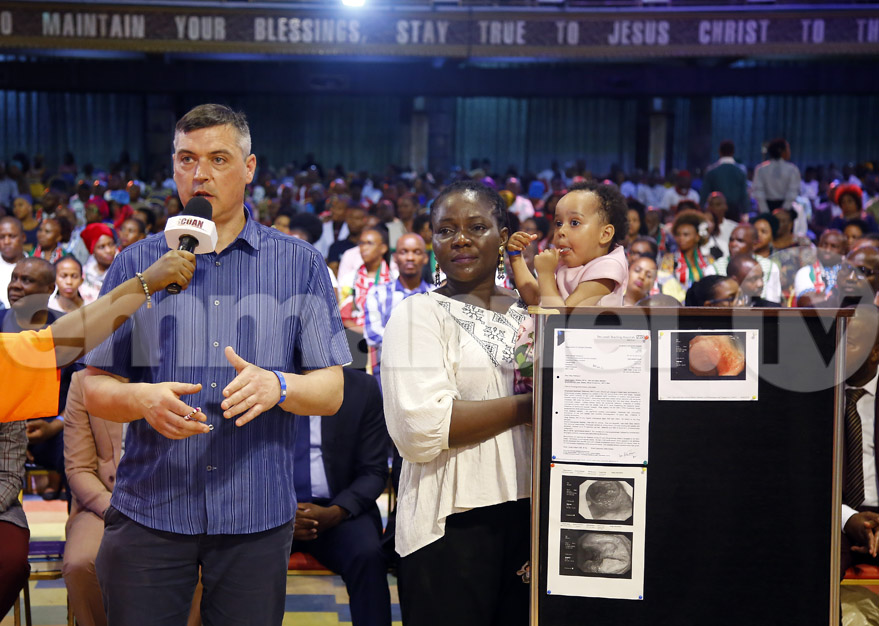 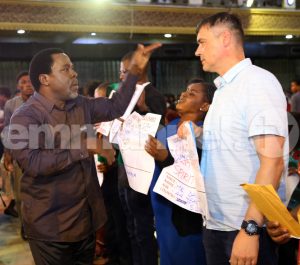 been addicted to smoking, a very expensive habit in the United Kingdom where the Slovakian lived with his wife. The doctors had told him: “After chemotherapy, we will operate on you but it’s fifty-fifty. You see, if you survive the operation, you may lose the capacity to use your male organ for procreation.” And that wasn’t at all a cheerful prospect for Mr Ogen, so in July 2018 he ran to a place of refuge – The SCOAN. Meanwhile, before visiting, he had found himself using the toilet at least eight times a day, eventually leading to his quitting paid employment. After prayers at The SCOAN, he returned to the doctors in the UK and told them the operation was off! “You must be joking,” they sneered at him. But he knew his faith had made him whole. Then the doctors tested him and found his tumour had disappeared! They tested him two more times – and the tumour was still nowhere to be found! Luckily for Mr Ogen, the anointing that dried up his tumour also took away his desire for cigarettes! What was more, he became the proud father of a beautiful baby girl about a year later. Mr Ogen and his wife returned to The Synagogue to testify of the Lord’s goodness in their lives. Clutching her “miracle baby” close to her chest, Mrs Ogen advised people to look for a Bible-believing church and to wait for God’s time.

TWENTY-TWO-YEAR-OLD DELIVERED FROM SPIRIT OF MAN 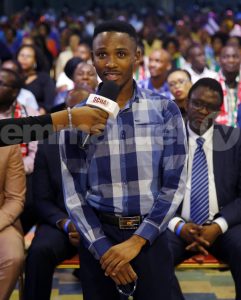 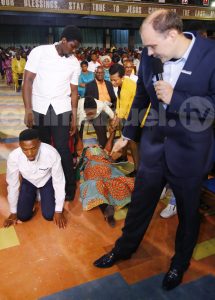 Mr Lucky Chonco was 15 years old and in secondary school when he became afflicted with the spirit of man. A member of a school fellowship, the young man had been zealous for God and had said deliverance prayers for a certain lady. A few weeks later, he found himself, in a dream, married to the woman. Subsequently, his Christian life suffered and the things of God lost their appeal for him. Worse was yet to come, as Mr Chonco eventually started a same-sex relationship with a potential Christian convert! And, in a bizarre twist of destiny, he started moving from one man to the next. However, because God had not condemned him, Mr Chonco came across Emmanuel TV and he later found his way to The SCOAN, where he received his deliverance. Today, his affection has been restored to normal. He advised people to let God lead them when it comes to offering prayers of deliverance to others. He also advised people in a similar situation to run to God for deliverance.

For 45-year-old Mrs Chinelo Odili, life had been miserable for the past four years. She had severe difficulty in walking owing to 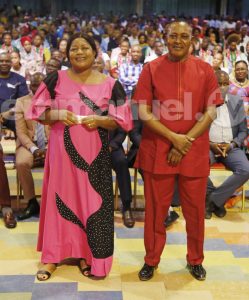 the affliction of lumbar spondylosis. After having visited many hospitals and consumed many herbal concoctions with nothing to show for it but an increase in her pain, Mrs Odili decided to take her case to God, especially after watching amazing testimonies as broadcast on Emmanuel TV. At The Arena of liberty, she received prayers in the mighty name of Jesus. “Thank You, Jesus! I am healed!” she exclaimed as she stood on her feet and walked unaided for the first time in four years. To prove her healing, Mrs Odili walked in front of the congregation and sang sonorously – things which her aching muscles had prevented her from doing previously. Today, she no longer needs her lumbar corset and knee braces. She encouraged others: “There is nothing God cannot do.”

SEVERE BACK PAIN AND OSTEOARTHRITIS OF FOUR YEARS VANISH AFTER PRAYERS 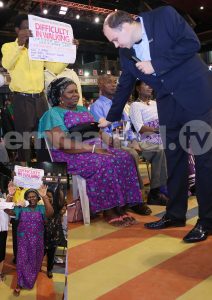 The 58-year-old Nigerian woman knew they had come to their wits’ end when they could do nothing else but give her a lumbar corset – those doctors in Virginia, 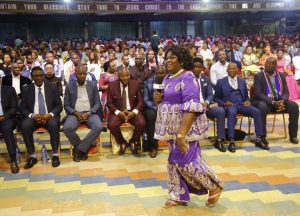 USA who were treating her severe back pain and osteoarthritis. For the first three years of her treatment they had only been managing to help her lessen the pain. Last year, however, they had given up the efforts and talked her into embracing a lumbar corset. Because she was sure God could do the impossible, Mrs Agha flew back to Nigeria to receive prayers at The SCOAN. And God rewarded her faith by healing her of all pain. While testifying in church, she walked with her back held straight; she also bent down and turned her body to the left and the right. She advised listeners and viewers to “come to God, the only healer.”

YOUNG MARRIAGE RESTORED AS ADULTEROUS, AGGRESSIVE WIFE GETS HER DELIVERANCE 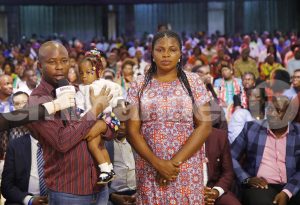 When Mr Ejiaku Declan took his then fiancée, Peace Declan, to the altar, he did not know that she was already the mother of three daughters, the first 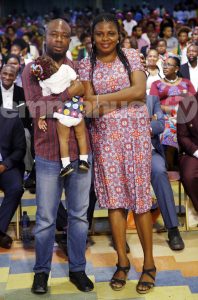 two being a set of twins she had had at 13 years of age! He did not also know that, as that time, one of his yet unknown stepdaughters was in fact getting married. Even more shattering was the fact that, despite all of this apparent baggage, his new wife would soon start having affairs. Needless to say, Mr Declan felt deflated when he found out all these secrets. He promptly sent his wife packing. However, his family prevailed upon him and he took her back but Mrs Declan still carried on with her affairs. When things came to a head, Mr Declan called it quits once again and approached divorce lawyers. Somehow, they discouraged him and the rather patient man lost his zest for life, even considering suicide at some point. Somehow, too, he made his way to The SCOAN. After getting his own deliverance, the man of God asked him to invite his estranged wife over. Mrs Declan came and the evil spirit in her fled as the man of God laid a hand on her. Testifying in church, Mrs Declan confessed to being free now from the spirit that made her act badly in the past. She advised people to run to God for solutions to their problems. “She is no longer unnecessarily aggressive,” her husband confirmed.