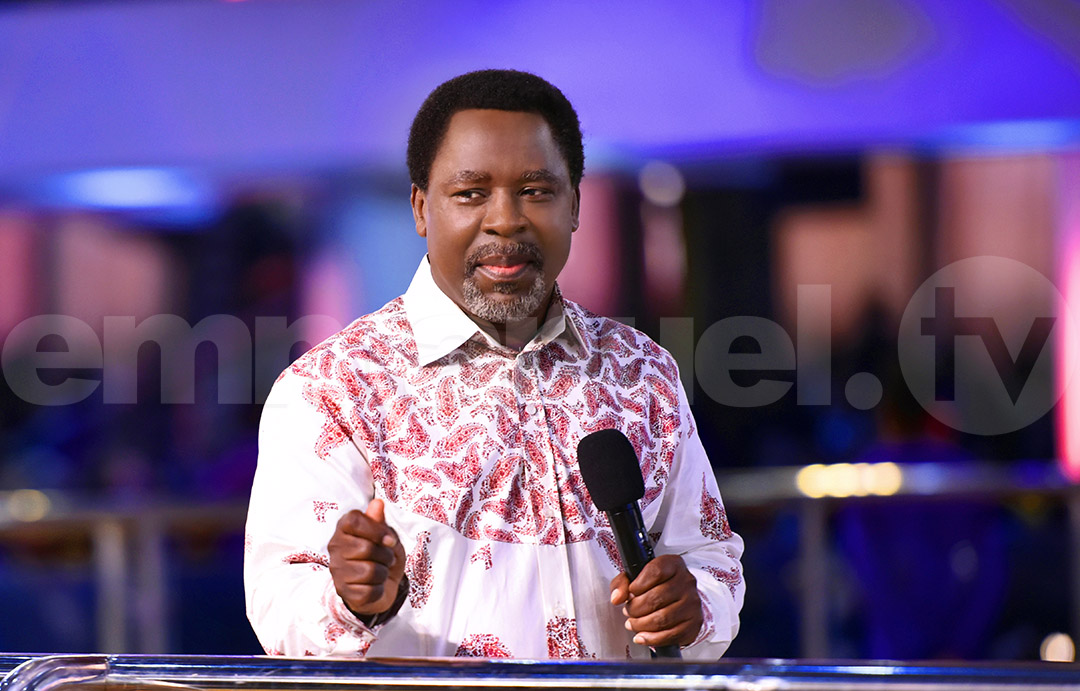 The glory of God descended like a cloud on The SCOAN congregation as the choir sang songs divinely inspired by God’s Spirit and evil spirits gave way in the lives of His children. In this state of brokenness, many in the congregation were now ready to be impacted by the Word and the anointing.

Taking his message from the anointed song, “Sin’s Power Over Me Is Broken”, Prophet T.B. Joshua took us back to the feet of the Cross of Calvary, emphasising that our sin cannot be covered by our appearance or tears – it must be brought to the Blood of Jesus before the Spirit can pray through us. In the message entitled, WHO NEEDS FORGIVENESS? he quoted from verses 10 and 23 of Romans Chapter 3: 10“As it is written: ‘There is no one righteous, not even one’”; 23 … for all have sinned and fall short of the glory of God”. He exhorted the congregation and viewers on the need to forgive themselves first so that they can forgive others. He said it was crucial for everyone to understand their limitations and to stop repeating stories of past failure, hurt and pain. Failing to do so, he said, would mean living “a carryover life”, contrary to what is expected of standard Christian living. Indeed, he said, both the offender and the offended need forgiveness.

Earlier on in the service, there was a powerful message from the woman of God, 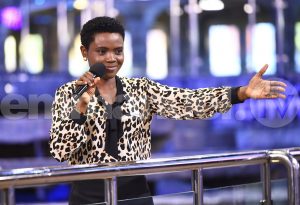 Below is a compilation of life-changing testimonies from the service that day: 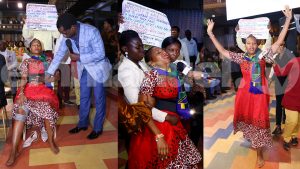 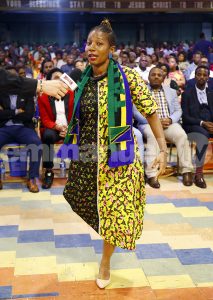 Despite the rather youngish looks of forty-year-old Mrs Lydia Haule, she had difficulty in walking owing to lumbar disc degeneration, hence her dependence on a lumbar corset and a knee brace. For 11 years the Tanzanian electrical engineer had been hooked on a cocktail of drugs to help ease her pain. Despite all the drugs, however, she could hardly function at work and had to give up her interest in athletics. At some point, she feared the pain was the result of being overweight. She shed off some weight but the pain remained. Encouraged to attend The SCOAN, Mrs Haule came and received prayers in the mighty name of Jesus. Squatting and jogging on the aisle, she demonstrated her healing and advised people to show faith in prayer and not grieve the Holy Spirit. 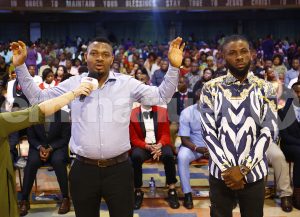 “I am his spiritual wife!” the evil spirit squealed as the woman of God prayed for Dr Clement Ogbuegbuna. That spirit had been responsible for warding off people and favour from the medical doctor. Prophecy also revealed something about the young man’s birth. Disturbed and harassed by the negative spirits following him from birth, Dr Ogbuegbuna took his case to God. “Oh, it was a wonderful thing to be here last week!” he said. Since his deliverance, he continued, he has been vomiting the evil deposits in his body. To the glory of God, patients are now eager to be seen by Dr Ogbuegbuna as the cloak of repulsion has been taken off him. “It’s only a fool that will say there is no God,” he declared as he advised all to believe in Him.

WOMAN DELIVERED FROM THE SPIRIT OF RAGE AND MARITAL PEACE RESTORED

“My name is Onuku. I am from the ocean. She was dedicated to me. I want to send her to prison. I took her brains.” Those were the demon’s words while being evicted from the body of Mrs Cynthia Nwobu, an ordinarily calm-looking Nigerian woman who was under the bondage of an aggressive spirit. She had in fact inherited it all from her mother, who suddenly walked away from her family 15 years ago, after relentlessly complaining about being chased by a dog. 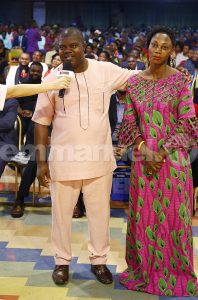 Always in rage inside of her, Mrs Nwobu took to fighting at the slightest provocation. It was during one such fit of anger that she injured a neighbour with a machete, leading to a pending court case. “I could beat 10 men at a spot and I would beat my husband like a baby,” she testified in church. Since receiving her deliverance, Mrs Nwobu now has divine peace and a calmness of spirit which endears her husband to her. No longer does she have nightmares or hear strange voices, having defeated her former spiritual manipulators in a dream she had after her deliverance. Testifying alongside his wife, Mr Nwobu himself thanked God for the prophecy regarding his dwindling business, believing a new dawn has now come for his finances. “Don’t give up on God,” he advised. On her part, Mrs Nwobu advised that people should not give up on those having issues around them.

Mrs Chika Boniface used to dismiss the miracles at The SCOAN as “magic”; she found it hard to accept that God’s anointing could be so freely and consistently available to His children. Anytime she visited her older sister and met her watching Emmanuel TV, she would chide her for not being smart enough. However, sometime in September 2018, she changed her mind after a vehicle lost 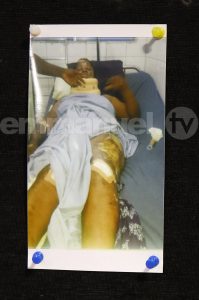 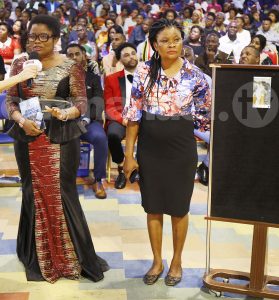 control and rammed into her. Upon examining her, the doctors gave a terrible verdict: “You will no longer be able to walk but we will insert four screws into the bones around your waist so that you can sit up at least.” Anxious to get her life back, Mrs Boniface paid for the surgery. However, a spirit nudged her to request The New Morning Water from her sister. 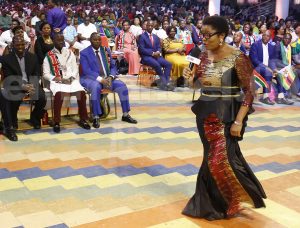 Before she ministered the water, she prayed for forgiveness from God for all the negative things she had said about Prophet T.B. Joshua and the ministry. Thereafter, she begged God to heal her as He had healed other people with similar cases. And the merciful God honoured His name in her life by restoring her hitherto condemned spinal cord! With another X-ray confirming her healing, Mrs Boniface was discharged without the need for surgery. Testifying in church on Sunday, she narrated her engagements with the doctors and how she overcame unbelief; it was clear that Mrs Boniface has now become a firm believer in God’s power. Mrs Boniface urged people to desist from saying negative things about God’s prophets and to believe in the supremacy of God’s power.

Miss Jane Kasaro, from Zambia, testified of how the Lord delivered her from the spirit of failure. Having registered for a programme in Clinical Medicine in 2014, Miss Kasaro found it hard to make headway as her life was dogged by constant nightmares and dreams in which she saw dead people and ate strange meals. When she wrote her pre-final exams, she was told she had failed. As such, she became suicidal. Subsequently, she began watching Emmanuel TV. Eventually, she reached out to her friends who had been to The SCOAN, pleading with them to give her The New Morning Water. She then wrote an appeal letter about the exam she was supposed to have failed. However, she sprinkled the water on the letter before submitting it. To her surprise, the officials 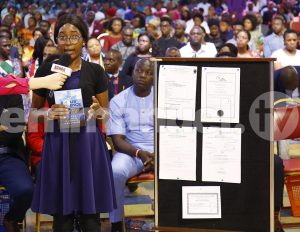 informed her that she had not initially failed. Although it was only a week to another final exam, 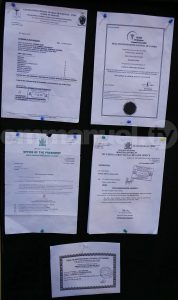 Miss Kasaro ministered the water as she prepared for her papers. She said that her studies suddenly became very easy, she passed the exam with flying colours and was awarded her license as a medical practitioner. The following month, she got a job with the Zambian presidency and she is no longer a loser but a victor.