I AM WHAT I DO NOT WHAT I SAY - The Synagogue, Church Of All Nations - SCOAN - Prophet T.B. Joshua (General Overseer) Skip to content 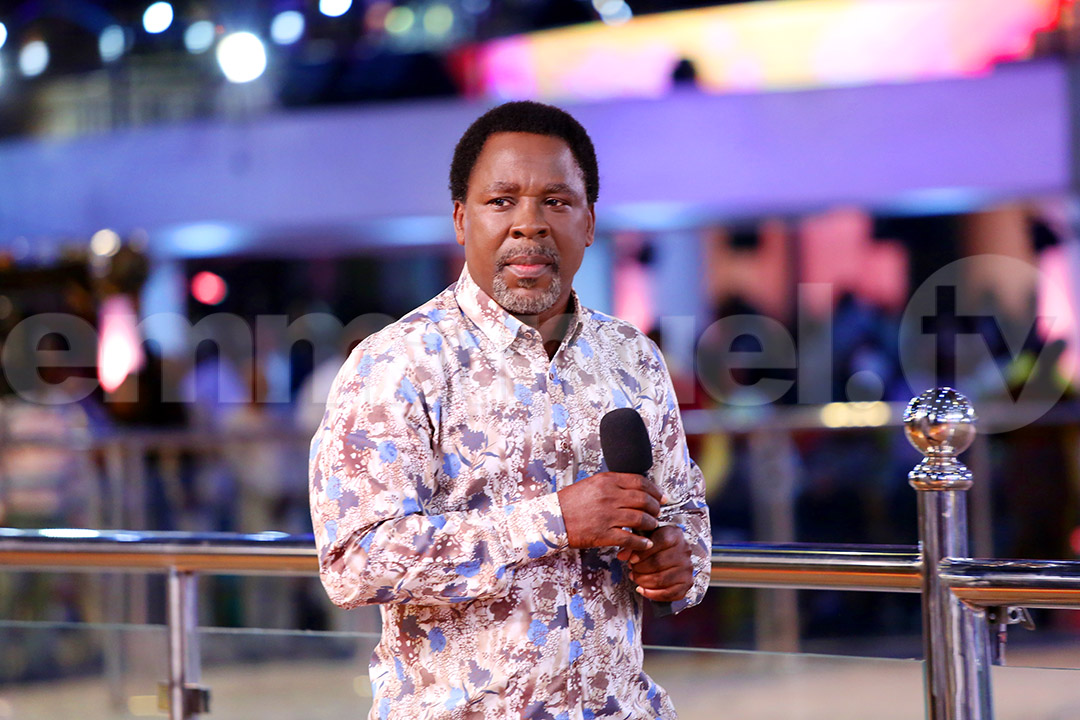 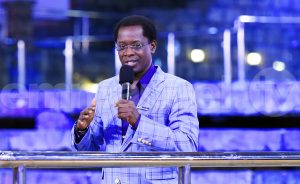 It was indeed an impactful time at God’s presence on Sunday. Right from when The SCOAN Choir started singing, God poured down His anointing in torrents as the afflicted manifested in diverse ways. One could see the move of the Holy Spirit as many vomited whatever that was not of God that had been deposited in their systems. It was a remarkable moment that the congregants and viewers all over the world would live to remember.

The man an of God, Prophet T.B. Joshua preached about the need for Christians to match their actions with their words because knowing facts about Jesus doesn’t change our relationship with Him. In His words, “I am what I do, not what I say”. The man of God also spoke on the importance of cultivating a humble lifestyle. According to him, “Unless you are humble, you will not bow to Jesus”. He noted that humility will not hear, say or do something without questioning because Jesus is all the world to us. As Prophet T.B. Joshua prayed for the congregation and viewers, he stressed the need for them to let Jesus make them channels of obedience where there is disobedience, channels of humility where there is pride and channels of forgiveness where there is injury, urging them to be alert and conscious of what they do and say and desist from going to places where Jesus is not invited.

Similarly, in his message entitled ‘CHRISTIANITY IS ALL ABOUT HEART’, Racine noted that it is not our logic, philosophy or knowledge that brings about a new life in Christ Jesus. He said, men may mentally assent but not have. Citing Matthew 7:20, he noted that “Men may do much by outward restraint but lack the character of God in their resolutions”. While observing that someone may profess Christianity but live a contrary life, Racine asserted thus: “Human knowledge, understanding oftentimes make a mistaken judgement of character but the Lord only values the holy faith, love, peace – the fruit of the spirit – embedded in our heart, beyond human discernment”.

AND THE TESTIMONIES FLOWED

As an indication of God’s anointing at The SCOAN, there was not enough time to share all of the awesome testimonies of what the Lord has done in the lives of His children. Nevertheless, the few that were taken helped to build the faith of those seeking God’s face even as they glorified God’s name.

STIFF NECK HEALED, IN THE NAME OF JESUS! 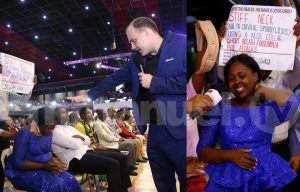 Opening the floor was 32-year-old Miss Funke Ogiku from Edo State, Nigeria. Since she was 17, Miss Ogiku had suffered from cervical spondylosis which eventually led to stiffness of her neck. She also suffered from shortness of breath, insomnia and evil attacks. She was accompanied to 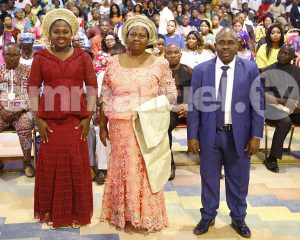 church by her parents, who narrated how they had sought solutions all over the world in a bid to put their daughter out of her misery, all to no avail. As her

situation worsened, Miss Ogiku decided to come to The SCOAN for a divine touch and after prayers, she received her perfect healing, in the name of Jesus. She testified during the Live Sunday Service at The SCOAN that she can now do household chores and use traditional headgear since she no longer suffers headaches, stiff neck and all the discomfort associated with her former condition. Miss Ogiku advised people to exercise faith before and after their healing.

ULCEROUS LEG DUE FOR AMPTUTATION HEALED! 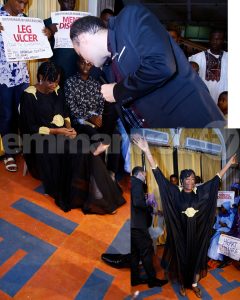 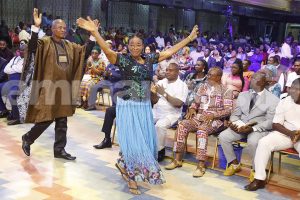 Fifty-eight-year-old Mrs Justina Okonkwo came to The SCOAN with a rotting, ulcerous lower left leg. As a diabetic, Mrs Okonkwo would need to have the leg amputated, the doctors said. Mrs Okonkwo was left at the mercy of her husband, who chose to stick it out with her. He brought her to The SCOAN. After prayers in the mighty name of Jesus, Mrs Okonkwo rose up in faith thanking God for her healing. A few days later, the hideous ulcer had dried up completely!  During the Sunday Service, she demonstrated her healing, stamping the leg on the ground and declaring to all that she no longer felt any pain. Her husband advised people in the same situation his wife was once in to run to God, just as Mrs Okonkwo herself urged people to seek God for their own miracle. 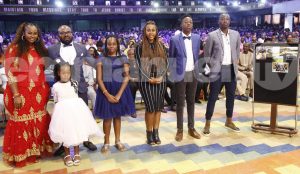 Another testimony given was about the divine repair of a home that was on the verge of breaking. South African Mrs Nombulelo Nwobodo had married a Nigerian 20 years ago and the union produced five children. However, things were not well between the couple, as Mrs Nwobodo had lost affection for her husband and there were fights all the time. When she came to The SCOAN, she received a prophetic message from Prophet T.B. Joshua concerning her marriage and phone addiction. The prophecy also revealed that there was in fact a spiritual husband taking away her attachment. Her husband was invited and they were both delivered, in Jesus’ name. As Mr Nwobodo, his wife and children stood to testify of the goodness of God upon their lives, one could see the radical transformation that had taken place. Their marriage had indeed been restored. Not only that, things have greatly improved for the family as they are now the owners of a much bigger school and two new high-end cars. Mr Nwobodo advised men to wait on God when they are having marital challenges. Similarly, Mrs Nwobodo urged men not to abandon their marriage in times of difficulty but to seek God’s help.

DISTANCE IS NOT A BARRIER TO THE MOVE OF THE HOLY SPIRIT! 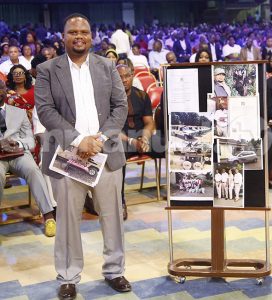 Although Tanzanian Mr Erasto Gurty had never been to The SCOAN until last Sunday, he had recorded an astonishing miracle by showing faith in God after he started watching Emmanuel TV. An employee tour guide for 12 years, Mr Gurty earned very little and never had hopes of owning a business. However, God had big plans for him. After he started watching Emmanuel TV and praying along with Prophet T.B. Joshua, Mr Gurty had a dream in which Prophet T.B. Joshua urged him to start his own business. He had no clue as to how this would happen. Well, the divine answer came in the form of a foreign couple he met during one of his tour-guiding duties. They were impressed by his work and gave him monetary support to start his own Safari business. For Mr Gurty, it was like a dream – his life of poverty had come to an end! Today, Mr Gurty runs a thriving Safari business.

He advised people to pray along with Prophet T.B. Joshua on Emmanuel TV for distance is not a barrier to the move of God! 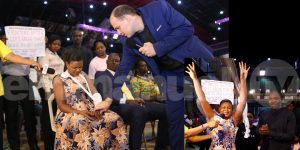 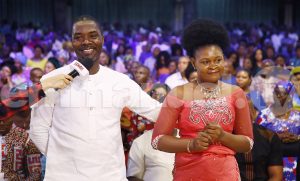 Since her healing and deliverance, joy has returned to their marriage. Not only that, Mr Nnadi’s civil engineering business has got on an upward swing, as professional colleagues have been proposing to do business with him. To God be the Glory!

MULTIPLE FIBROIDS FLUSHED OUT THROUGH THE GOOD MORNING STICKER! 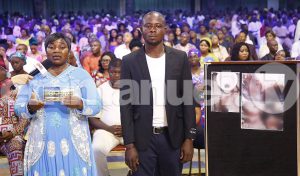 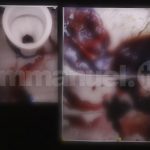 Mrs Dinah Atule’s testimony during The SCOAN Live Sunday Service had to do with God’s anointing on The New Good Morning Sticker. For over 15 years, Mrs Atule was under the bondage of fibroids which gave her severe headaches and body pains. Oddly, she was also an eater of soap and chalk! Moreover, she enjoyed alcohol. As for the fibroids, to get any sleep at all, she had to have her body massaged. However, the merciful Lord had something in store for her: Someone gave her husband, Mr Atule the Good Morning Sticker. He promptly passed it on to his wife, asking her to pray with it. Mrs Atule taped the sticker to her troubled tummy as she went to bed, inviting the Lord to take control. Hours later, she sprinted to the toilet hoping “to give birth”! And she did – to her bloody fibroids! Today, Mrs Atule is also free from the desire for chalk, soap and alcohol. And did we add that she now sleeps like a baby? Certainly!