WHAT GOD WANTS US TO BE - The Synagogue, Church Of All Nations - SCOAN - Prophet T.B. Joshua (General Overseer) Skip to content 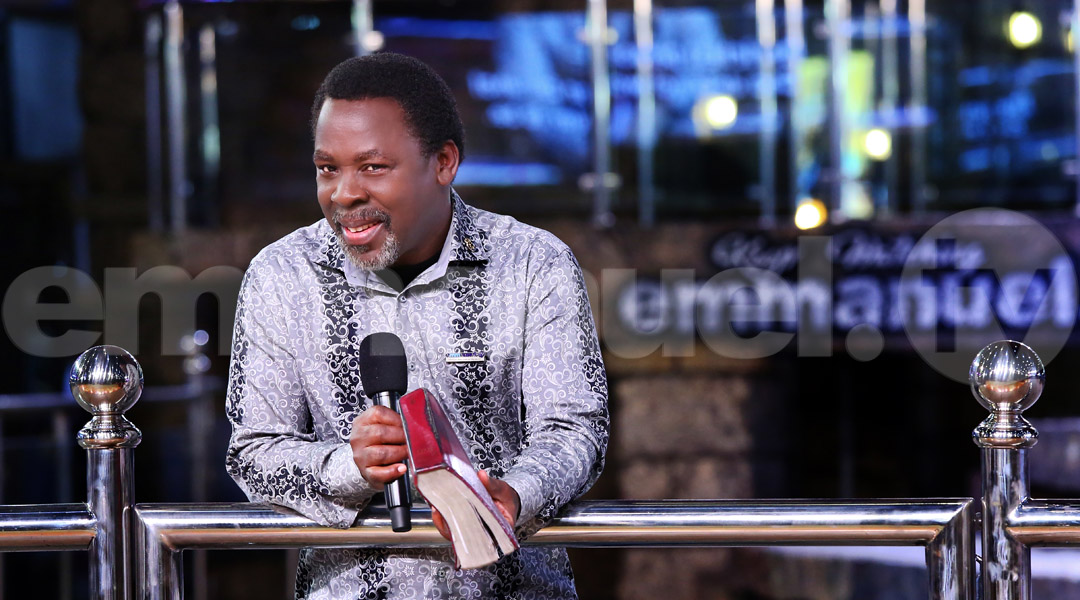 It was a festive mood at the Arena of Liberty on Sunday, the first day of the anniversary week of Emmanuel TV. In gratitude to God, Prophet T.B. Joshua joined The SCOAN singers on their platform as he led the congregation in songs of praise to the Almighty Father.

Prophet T.B. Joshua started his sermon appropriately titled ‘WHAT GOD WANTS US TO BE’ by asking a thought-provoking question, “Are you really the person God wants you to be?” He enlightened the congregation and viewers that “One can be the richest person in the world yet not what God wants him to be” and that “The first step to knowing our destiny – what God wants us to be, is to get to know God better.”

The message admonished Christians not to be sense-knowledge believers but to follow the leading of the Spirit at all times. The man of God quoted Luke 10:20 and exhorted the congregants and viewers all over the world to develop a free spirit devoid of malice, envy, jealousy, bitterness and unforgiveness etc. 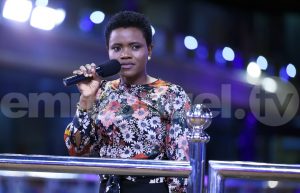 Yinka’s message, THE SECRET OF ABUNDANCE, also addressed a core aspect of practical Christianity. With references from John 17:18, Matthew 25:35-39, Mark 12:38-44, Genesis 41, 2 Cor. 9:6-7, Psalm 37:25, Gal. 6:6-10, she illustrated the importance of sacrificial giving, for, “God is most honoured in our sacrificial giving but is dishonoured by our offering of convenience”.  As children of God, she explained that when we release the seed in our hands – seed of forgiveness, love, compassion, the Lord promises to release His blessing upon our lives. Christians who learn to share whatever they have, she explained, would both be putting a smile on the face of others as commanded by Jesus Christ and helping to activate their own divine destiny. Concluding she said, “I want to leave you with this thought in mind: You will reap the full harvest of whatever you sow if only you persevere”.

I CAN HEAR YOU!

Two years ago, Mr Baltus Bejanga suddenly lost his hearing. At first, he thought it was a minor problem 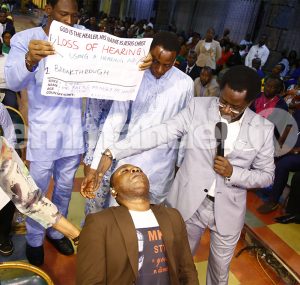 but he was wrong, as the doctors eventually diagnosed him with progressive chronic tinnitus, a condition that incapacitated him and left him with the permanent use of a hearing aid. A Cameroonian living in Qatar, Mr Bejanga saw the best of doctors but they could not proffer a solution to his case. Mr Bejanga continued living life with a sense of ‘incompleteness’ for two years. “I was so, so disturbed,” he said. Most times, he added, he lost many job opportunities. “It affected communication at home, with my wife and children,” he continued.

A firm believer in the power of Jesus Christ, Mr Bejanga 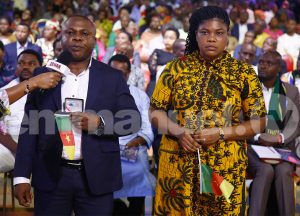 resolved to run to God at The SCOAN. At the prayer line, Mr Bejanga was located by the man of God, who prayed for him, in the mighty name of Jesus. Instantly, God’s unfailing power surged through Mr Bejanga and he went into a trance-like state as his body began to vibrate, the high spiritual voltage eventually throwing him to the floor. As he stood up, he began to exclaim God’s name in utter excitement, thanking the master Healer for the awesomeness of His power. He advised the congregants as he testified during the live Sunday Service, “The world can forsake you, but if you go closer to Jesus He will give you life, healing and blessings”. Mr Bejanga’s wife corroborated her husband’s testimony, advising everyone to exercise faith in the power of our Lord Jesus Christ. Emmanuel!

Despite the severe pains he was experiencing, 77-year-old Fredrick Kayode 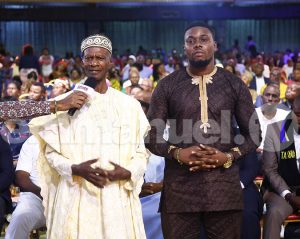 undertook the long road journey from Ondo State to Lagos assured that the Lord Jesus Christ was the only One that could heal him of an ulcer that had battered his right leg. The sore was painful, smelly and humiliating, making the old man miserable. Not wanting to have his leg amputated, Mr. Kayode ran to God. “I have a TV set on which I watch Emmanuel TV and I see amazing miracles received by people from all over the world, so I resolved to come to The SCOAN,” he said. 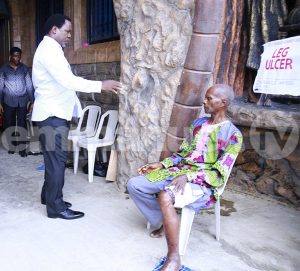 At The SCOAN, Prophet T.B. Joshua prayed for Mr. Kayode in the power of the Holy Spirit, declaring him healed. “I was relieved immediately,” Mr. Kayode said. “Within two or three weeks the sore had virtually dried up,” he added. A short while later, Mr. Kayode returned to The SCOAN to show his leg completely healed and restored. He could now wear a shoe on the right foot and stamp it hard on the floor. Now 79 years old, Mr. Kayode returned last Sunday to The SCOAN to further testify before the congregation that when Jesus heals you, He does so effectually and completely. Now perfectly free from pain and back to his vivacious self, Mr. Kayode advised that everybody should have faith in God.

PREACHER DELIVERED FROM SPIRIT OF LUST 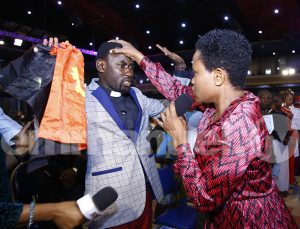 Once she sighted him, the Holy Spirit spoke through the woman of God: “Be delivered from that spirit of lust, in the mighty name of Jesus!” According to the woman of God, Pastor Beni Lukuto’s problem started after he prayed for a certain woman. From then on he could not stop lusting after women, leading to serious problems in his life and ministry. Confirming the prophecy, he said he was initially ashamed 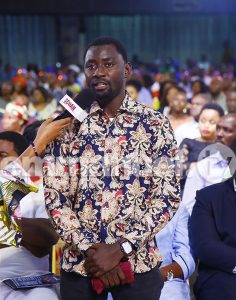 of revealing his problem and he would fast and pray fervently on his own for this wicked spirit to leave him but all was to no avail. Seeing that his problems kept compounding, he discarded the blanket of shame and came to The SCOAN where he received his deliverance. “When the woman of God touched me, I felt like a spirit jumped out of my body, as if 10 baskets of stone left me,” Pastor Lukuto said of his experience during the deliverance. No longer does he lust after women. He added that the spirit of anger has also departed from him. To crown it all, Pastor Lukuto is now able to meditate genuinely on the Word of God.

He advised all not to live a pretentious life but to seek true deliverance in order to serve Jesus Christ in truth and faith. Hallelujah!

FIBROIDS FLUSHED OUT DURING MASS PRAYER 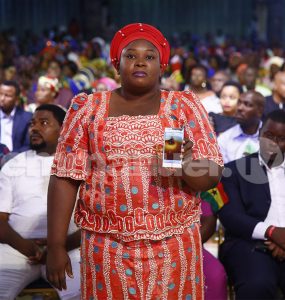 She began her testimony thus: “Help me tell your neighbour, ‘It is my turn to testify’”. Mrs Joy Benjamin had been a prison officer until a perpetually rising tummy made it impossible for her to continue working effectively. For eight years she had fibroids as well as movement in the body and pain in the lower abdomen. No matter how little she ate, she would find her body swelling to the point where her arms would remain suspended away from her body. No longer the active sports instructor that she used to be, she was eventually sacked from her job.

Tired of her condition, Mrs Benjamin decided to come to The SCOAN in search of divine intervention. During the Mass Prayer at The SCOAN last week, Mrs Benjamin placed her hand on her stomach as she prayed. She soon began to notice that something was happening inside her. She rushed to the restroom, and found that the fibroid had burst – she passed it all out in the toilet. Now Mrs Benjamin can eat full meals and can bend down as well as lift her hands far away from her body as the pain and discomfort is gone. She advised those waiting on God for healing to remain patient and wait for their turn to be healed, delivered or blessed. 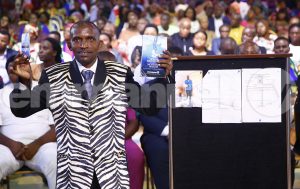 Mr Fabian Halala, from Tanzania, was sleeping one night when he suddenly felt a terrible pain. He woke up to discover his shoulder had dislocated. His wife rushed him to the hospital where the doctors diagnosed him with a dislocated arm and gave him an arm sling. Around the same time, a friend of his had visited The SCOAN and received The New Morning Water. The friend gave him some of The New Morning Water and the moment he ministered it, Mr Halala felt his shoulder ball sucked back into its socket. He ran back to the doctors to confirm what had happened. “You are indeed healed,” they declared after running an x-ray on his arm. Mr Halala advised viewers of Emmanuel TV to have faith in God. Before ending his testimony, Mr Halala swung his arm around to demonstrate his perfect healing. 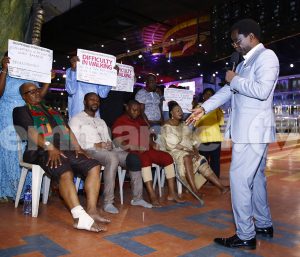 A right ankle injury in 2016 – that was the immediate problem that brought Zambian prisons officer, Mr Robert Katawa Mwale to The SCOAN. However, the Spirit of God was more concerned about his need to let go of the pain of the past: He needed to forgive his daughter. For a man who was also seeking career breakthrough, this was indeed 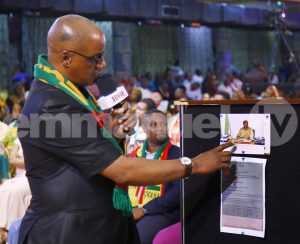 an important prophecy. After receiving prayers in the mighty name of Jesus, Mr Mwale’s pain vanished. Confirming the prophecy, he said he had disowned his daughter for refusing to attend school. On the advice of the man of God, Mr Mwale resolved to forgive his daughter. Three days later, while still at The SCOAN, he received a phone call bringing news of his promotion to Deputy Commissioner of Prisons Service and Director of Infrastructure Development Unit of Zambia Prisons Service. His double promotion was an unexpected surprise propelling him to know the value of letting go of offence.

He advised: “It is not good to harbour the spirit of unforgiveness in your heart against anyone – we should have a free spirit.”

STIFF NECK HEALED AT THE TOUCH OF THE LORD 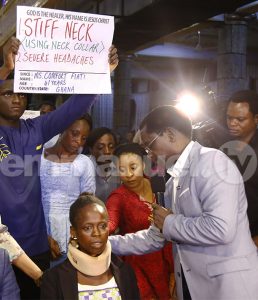 On the 8th December 2018, Ms Comfort Fiati, a Ghanaian, had a car accident which put her in a coma for nine hours. It was a most difficult and apprehensive time indeed for the family and well-wishers of the 41-year-old. 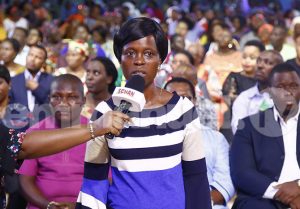 After recovering from the coma, Ms Fiati could no longer turn her neck, so she had to be given a neck collar to support her neck. Unhappy to see her suffer, Ms Fiati’s pastor brought her to The SCOAN, where she received prayers in the mighty name of Jesus. Immediately after the prayers, she got delivered from the affliction of a stiff neck. As she testified in church, Ms Fiati radiated calm and inner peace as she demonstrated how she can now move her neck freely, together with her limbs. She advised the congregation to have faith in God. Praise the Lord!