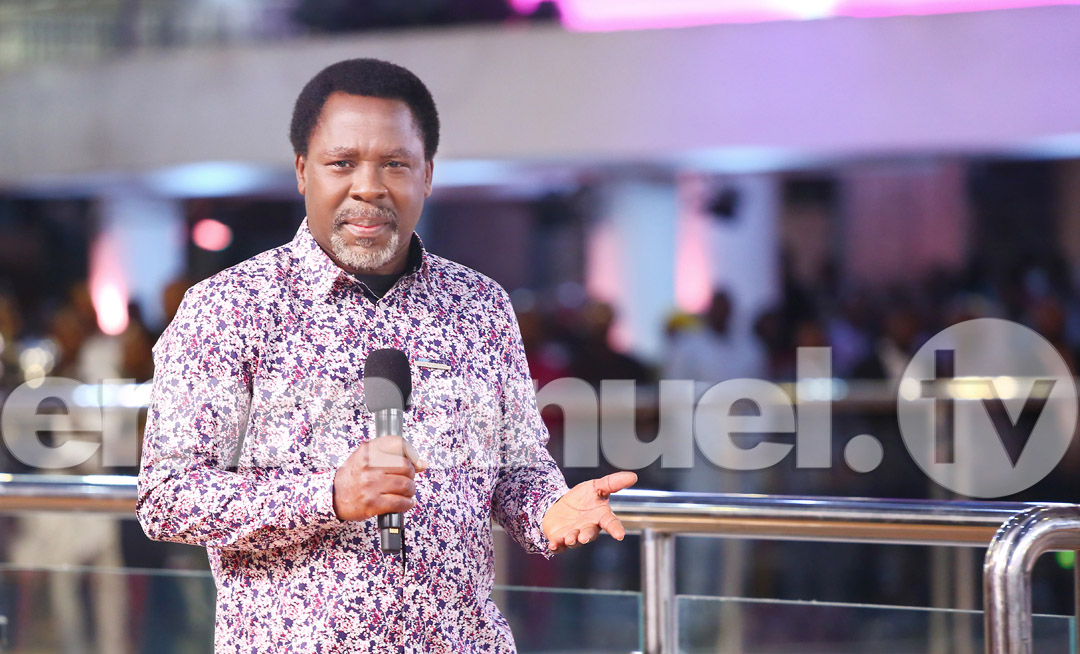 The songs by The SCOAN Choir were all in sync with the messages that followed. They called for God’s mercy on all. They asked God to free the captives and give them rest. They re-affirmed the need to believe God in order to receive from Him so that defeat and failure would be things of the past. And they handed over their problems to the Creator, who fills Christians with joy and victory. As always, the church auditorium became suffused with God’s Spirit as the praise and worship session went on.

Before going into his message titled ‘Believe and Confess Part 3, Prophet T.B. Joshua again said a few words about the importance of reporting what we see and hear. He reiterated that hard work alone cannot help any establishment to grow and that “when you report what you see and hear, it settles issues, answers questions, clarifies doubts and provides a way forward”. The highpoint of his exhortation was that Christians should seek divine grace to avoid harbouring the unclean spirits of unforgiveness, envy, bitterness, jealousy, anger, etc. which break communion with God and lead to poverty, affliction, hardship, rejection and nightmares. Noting a break with God is the reason some people lose their blessings, he advised Christians to examine their heart and ensure they are worshiping God in truth and in Spirit.

Prophet T.B. Joshua also explained that becoming what God wants us to be will require knowing God better which means discovering our spiritual gifts with the help of the Holy Spirit. A Christian who does not activate his or her spiritual gifts, he said, is inconsequential, that is, “zero”. In his words, “You cannot become God’s person on the history and theory about the Word of God.” As such, he noted, it profits little if a person commits the Bible to memory but does not allow the Word to become an integral part of his or her life. Finally, Prophet T.B. Joshua exhorted the congregation and viewers with the following words: “What I am expecting you to take home is the issue about your heart. It is a fundamental issue. If you have received all the blessings and deliverance here today, without a pure heart, you will lose them. It is a pure heart that maintains blessings, deliverance, breakthrough. With a pure heart, man knows that Jesus saves, heals, blesses, delivers.” 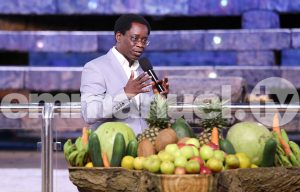 Teaching along the same lines, Racine spoke on, ‘The Uncompromising Demand’. He started by citing Jesus’ admonition that Christians should ask in faith so they can receive (Matthew 21: 21-22). He then took his reading from Hebrews 11: 1-3 – the passage on faith being the substance of things hoped for. Racine said that God has a promise for us, although most Christians fail to take hold of the promise, owing to failure to exercise faith – the uncompromising demand. Exercising faith involves letting God speak to us through the Holy Spirit as embodied in God’s Word. Racine also said, “claiming” is not truly exercising faith but rather “mental assent” which merely “recognises the truthfulness of God’s Word but never acts on it”.

For a biblical example of such mental assent, Racine referred to the experience of the seven sons of Sceva who, in Acts 19: 13-16, did not show they truly believed in Jesus Christ of Nazareth but were merely echoing His name as they heard Paul use it. Also citing John 11:41 and John 5:15, Racine further said that a true Christian believes his or her blessing, healing or deliverance has come even if the physical evidence seems to be contrary. Racine closed his message thus: “By faith, I stretch my hand. By faith, I believe. By faith, I confess. By faith, I act. Faith believes now. Faith acts now. Faith receives now. You are healed. You are blessed. You are delivered.” 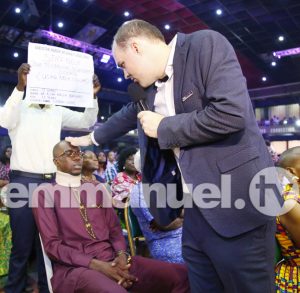 His youthfulness belied his 35-year-old frame, yet for the past 13 years, Sierra Leonean citizen Mr Allan Bangura had been suffering from stiffness of 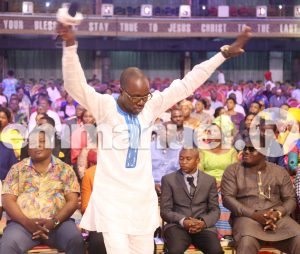 the neck owing to cervical degenerative disease. To help ease his pain, the doctors had prescribed him a neck collar. Trying as much as he could to tolerate the excruciating pains associated with this sickness, the young man had found himself unable to write his final paper in the series of examinations to certify him as a professional accountant. He had been unable to use his writing hand – the right hand. Life became very miserable for him as this pain in the neck refused to let go of him. Having resolved not to live the rest of his life this way, he came to The SCOAN to seek the face of God for a divine solution. “I’m seeing an addiction,” the man of God said as he ministered to Mr Bangura and urged him to refrain from it. After praying for him, in the mighty name of Jesus, the man of God asked that Mr Bangura’s neck collar be removed and the latter thanked God as he declared his total freedom from pain. During his testimony Mr Bangura admitted his fixation with pornography, especially in his younger days, thus confirming the prophecy. He said he was now perfectly healed and would be returning home to finish his qualifying examinations, and that, of course, pornography was now a no-go area. He advised people not to doubt the prophecies and testimonies shared at The SCOAN, and to run to God for their own salvation, healing and deliverance.

DELIVERED FROM EATING SAND, SOIL AND CHALK FOR 10 YEARS 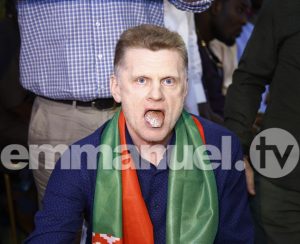 If not for the fact that satan had managed to reset Mr Aliaksandr Dulski’s taste buds, there is no way soil, sand and chalk would have tasted so 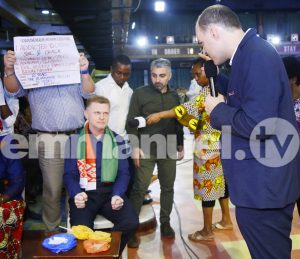 delicious that he did not care for food anymore. It had all begun one day when Mr Dulski caught a whiff of 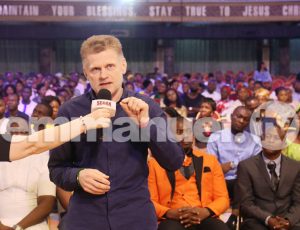 ploughed soil and a demonic spirit urged him: “Taste it – it’s good”. Since then, he could not eat normal food without first tasting soil or topping up his meal with it. In actual fact, Mr Aliaksandr admitted that he would lie on his stomach and lick soil, slithering like a snake as he did. And to think that the 52-year-old man from Belarus ate such ‘odd delicacies’ for a good 10 years! During winter, when soil was not available, he would make do with chalk. As with most addictions, the more Mr Dulski tried to stop his addiction the more satan made him sink deeper into the abnormality. Consequently, in addition to eating soil, sand and chalk, Mr Dulski was further afflicted with the spirit of lust and masturbation. However, he eventually made his way to The Arena of Liberty having seen on Emmanuel TV a woman being delivered from the same affliction.

“Who are you in this body?” the man of God asked. “I am killing him because he doesn’t want to serve me!” the demon thundered menacingly. As the prayers went on, the Holy Spirit seized the demon and thrust him out of Mr Dulski’s body and life, for good! Invited to relish his strange substances again, Mr Dulski quickly spat them out as his tongue no longer recognised them. “Hallelujah! I praise You, Jesus!” he exclaimed tearfully. He had the following words for those suffering from addiction: “Run to Jesus Christ for He alone can save you”.

DIVINE DESTINY RESTORED AS ALCOHOL AND MARIJUANA ADDICTION IS BROKEN 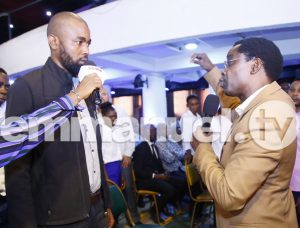 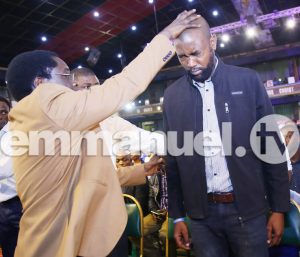 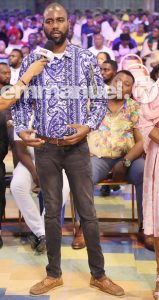 “Your crown has been removed. You’re looking at me, but there are two people inside of you. You’re no longer yourself; something is manipulating you.” Those were the words issued by the Holy Spirit before the man of God laid hands on Mr Khumo Kebararile, a Botswana national who had derailed from his God-ordained destiny owing to excessive drinking, chain smoking and addiction to marijuana. Mr Kebararile had been brought to The SCOAN by his female cousin Sibongile, who had been disturbed about his antisocial habits. Mr Kebararile said he was into the business of transportation tracking but the business suffered as he joined bad friends who introduced him to smoking and drinking. “I often spent about $500 dollars a week on those things,” he confessed. He also said that he rejected advice from parents and relatives. “My cousin urged me to come here, that I would find a solution here,” he added. Confirming the prophecy about Mr Kebararile, Sibongile said they are from a royal family. She advised parents to always monitor their children and bring them to the presence of God instead of coming alone. On his part, Mr Kebararile advised the youth to shun substance abuse, as it is a habit that is difficult to beat once you start. He further advised parents not to give up on their children. 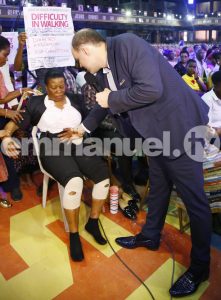 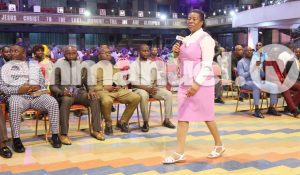 Because of spinal stenosis, Mrs Nyrva Guerrier had severe difficulty in walking. When the doctors found that there was little they could do for her, they gave her a lumbar corset and knee braces to help aid her movement. She also got crutches as well as a walker and a wheelchair. But, of course, these aids were not to be compared to the swiftness of her natural limbs. The 57-year-old Canadian nurse, who had been suffering for eight years, therefore decided to seek God’s face about her condition. She had become stagnant in her career since she could not do anything by herself. “My left side was completely gone; I could not move or bend”, she said. She had to be aided to take her bath and to get into her wheelchair. Surfing the Internet one day, she came across clips from Emmanuel TV. Then she had a dream in which Prophet T.B. Joshua prayed for her. As a result of this prayer in the dream, she found herself no longer needing the crutches and the wheelchair. Finally, she came to The SCOAN. At the touch from the man of God, Mrs Guerrier received her complete healing and immediately discarded her lumbar corset and knee braces! After strolling on the aisle during her testimony, she said people should realise they can do nothing without God, so they should run to Him while in their troubles. On the prophecy about a male child of hers needing help, Mrs Guerrier confirmed that it was about one of her 21-year-old twins.

As these testimonies show the power of God knows no limits and He will locate us if we position ourselves for His intervention. All that is required of us is to exercise practical faith, in Jesus’ name.