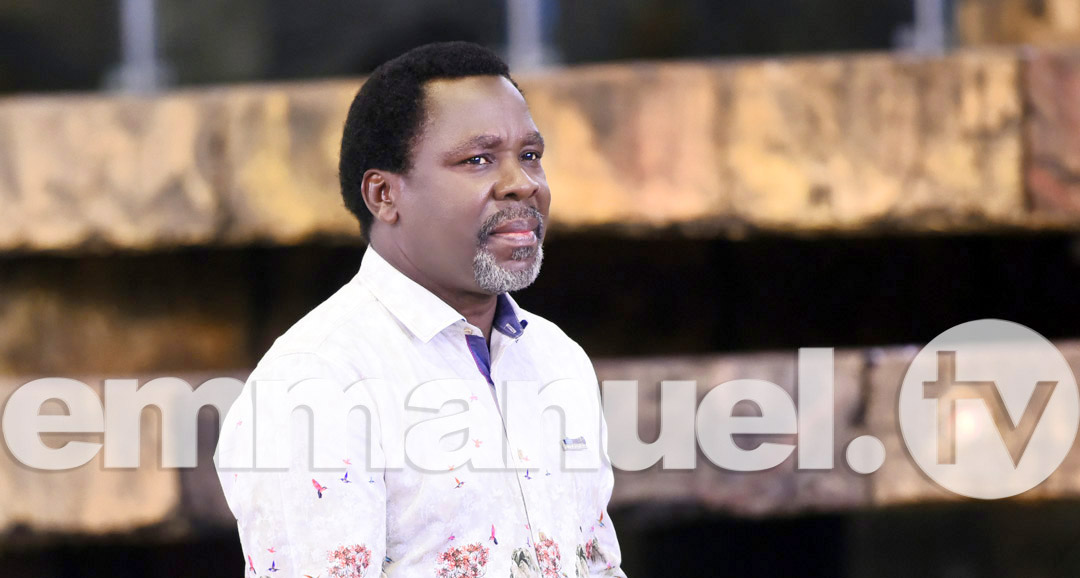 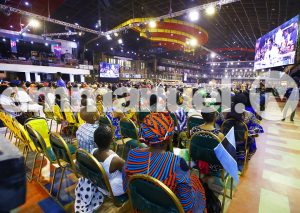 In a powerful message titled ‘Believe And Confess,’ Prophet T.B. Joshua started his admonition with an observation about the newness of Bible’s truths. “The Bible can be old but its truths are always new”. He then spoke at length about the core requirements for attaining leadership as he showed the link between true Christian living and what it takes to keep organisations in top performance shape. He referred to Matthew 16:13-20, the passage where Jesus asked Peter to report back what others said about Him and used it to illustrate the value of reporting. He argued that it is not enough for one to be just a ‘doing’ Christian but also a ‘talking’ Christian who understands that reporting on untoward actions is a way to maintain standards so that the vision of a ministry or organisation is not compromised.

In his words: “If you truly possess faithfulness, which is one of the fruit of the Spirit – the nature of God – you cannot see unfaithfulness and remain silent.” He noted that such action would imply compromise and explained that those guilty of compromise are not deserving of leadership positions. Moreover, he added, Christians must be aware that God’s Word exists in two parts: in the heart to believe and in the mouth to confess. He therefore urged Christians to reveal their true heart so that they can be placed and recognised for what they truly are. “Our mouth, like Paul said,” Prophet T.B. Joshua went on, “actually reveals what is in our heart”; as such, “When you work without equally revealing what is in your heart, you cannot be placed because our mouth is the revealer of the belief in our heart.” 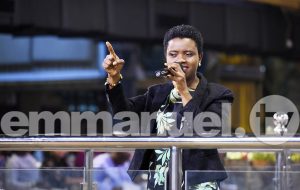 Evangelist Yinka gave a message entitled ‘Don’t Reject Jesus’, taking her reading from Hebrews 4:11-16. She focused on the connection between the state of a Christian’s heart and their ability to either accept or reject Jesus. After noting the centrality of the heart to the human body, she invited four volunteers to the altar. The scenario was of a situation where an unpleasant message had just been received. While the first character would respond with a heart still trusting God nevertheless, the second character would respond despondently, even blaming God. The third character stood for the devil and the fourth stood for Jesus. Apparently, the devil would get a field day in the heart of the second person and Jesus would stay away from them, just as the first person would attract Jesus and repel the devil.

Evangelist Yinka exhorted Christians to take care of their heart, which is “God’s contact, the communication point, God’s prayer room, God’s treasure”. In her words: “We oftentimes reject Jesus when our human nature does not wholly surrender, when we begin to experience a constant struggle, a constant battle, between the spirit and the flesh – conflict between light and darkness”. In such situations, she said, “We want to do it right but we find ourselves doing it wrong; we want to act in faith but we are compelled to show unbelief”. Reminding Christians that satan is “the enemy of our soul” who “would not want the purpose of God to be revealed in our lives,” she warned that “we have to put up a fight by taking hold of our heart”. In response to the power of God in the spoken Word, lives were set free during the message as different individuals around the auditorium began manifesting evil spirits and vomiting poisonous substances. Truly, God sent forth His Word and they were healed, they were delivered, in Jesus’ name!

God’s power continued to move on the scene as lives were liberated from the hand of the enemy. Testimonies followed.

If not for God’s intervention, Mr Neer Anande would have long been a goner, bringing sorrow to his immediate family comprising a young wife and two innocent kids. It was just four days to Christmas 2018 and the time was 4.21am. Gun-wielding robbers had forced their way into his living room. Dutifully, he had dared to confront the intruders when a bullet blasted into his chest at close range – about less than a metre. It was such a messy sight. 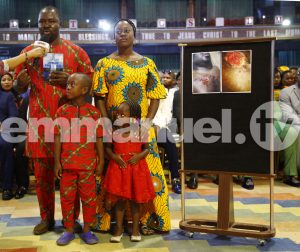 ‘The end has come for our breadwinner,’ the family feared, ‘and there would no longer be Christmas!’ Mr Anande was rushed to the hospital where doctors were surprised he was not only alive but also still able to talk. With over 20 gun pellets in his chest, this Nigerian citizen from Benue and a worker with the Federal Medical Centre, Makurdi, the state capital, was virtually given up for dead. After receiving treatment at the hospital, Mr Anande’s gaping wound remained a sorry sight. Wasting no time, he visited The SCOAN and received the New Morning Water. 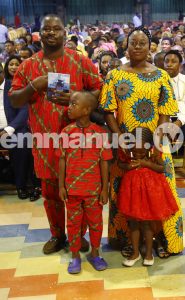 Mr Anande said he ministered the Morning Water every morning as he prayed with his family, calling for God to heal him as He had healed others through the medium of the Morning Water. Within a fortnight of ministering the water, he said, the wound dried up, leaving only a scar as evidence of the averted tragedy.

NO LONGER WALKING LIKE A DUCK, AS ARTHRITIS IS DEFEATED 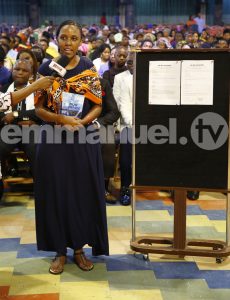 She had come to The SCOAN to seek divine healing for her rheumatoid arthritis. Diagnosed in 2008 at age 20, Ms Mamanyana Lehana from South Africa experienced so much pain that she could barely move her limbs. In a bid to save her daughter from the pain, Ms Lehana’s mother encouraged her to participate in the clinical trial for a new drug which had to be injected into the stomach. 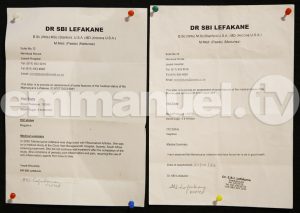 The side effects of the drug included a burning sensation in the stomach and peeling skin, so she quit the trial. In 2016 she came to The SCOAN, where Prophet T.B. Joshua prayed for her and she received the New Morning Water. 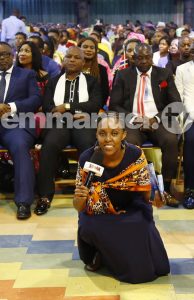 After consistent ministration of the water, Ms Lehana, now 31, is completely free from the bondage of arthritis. Displaying her clean bill of health, she advised people to see Jesus Christ as their hope, no matter their condition.

RESCUED FROM THE BRINK OF DEATH AS SLEEP APNEA VANISHES 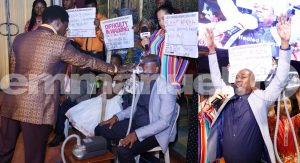 It was in 2015 when Ivorian Mr Ahouri Jean Luc Bohoussou discovered he had a problem. In the middle of the night he would suddenly wake up, feeling exhausted and unable to breathe properly. After visiting several hospitals, the 49-year-old was eventually diagnosed with sleep apnea, a condition which severely affected his work as a human resources director, leading to the loss of his job. To help Mr Bohoussou get some sleep, doctors gave him a machine on which he was to be dependent for life. This was no different from a death sentence, as far as he was concerned. But he didn’t want to die so he ran to God at The SCOAN. At the Prayer Line, Mr Bohoussou received a prophecy stating that he had almost died twice previously, a prophecy he confirmed as he had been unable to wake up for hours on more than one occasion. During the prayer, Mr Bohoussou said, it was as if his respiratory system suddenly came to life; he had received divine healing. 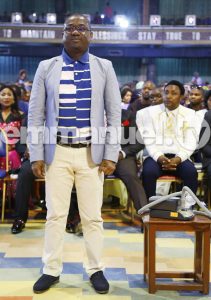 Since receiving his healing a week ago, he can now breathe freely and sleep like a baby, without needing his breathing apparatus. Certainly, he will no longer be needing the machine. He advised people to see Jesus as the only solution to human problems. 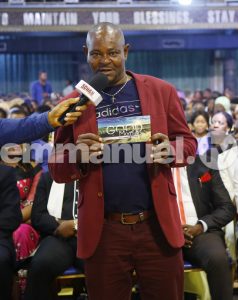 In early January 2019, Mr Ifeanyi Okoro was one of those who received the Good Morning Stickers for home and car. Believing in God’s anointing that they carried, he promptly stuck one to the windscreen of his SUV. As the Gabon-based Nigerian set out for a trip from Enugu (eastern Nigeria) to his village on January 26th he went out in the assurance that God was with him. Not far from his destination, Mr Okoro witnessed a test of his courage and a demonstration of God’s faithfulness to His Word.

Daredevil armed robbers were firing at cars and dispossessing people of their belongings. As he approached them, they waved him down but he throttled on even more aggressively. Angry, the robbers rained bullets on his car, aiming at the driver’s side whose glass was wound down as well as the rear of the car. 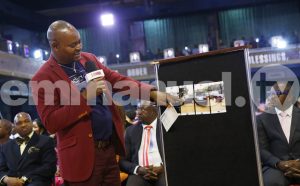 Fire as much as they did, however, none of the over 30 bullets were able to hit him or his younger brother. Even when a bullet blasted through the petrol-containing keg in the car, only a billow of smoke came up momentarily. Somehow, God had converted the highly inflammable product into water! “It’s like there was a wall, a barrier, between those bullets and me,” Mr Okoro testified. Asking the church to thank God with him, Mr Okoro encouraged worshippers to exercise faith when they receive and use their faith tools.

As you rejoice with us for all God has done this Sunday at The SCOAN and in homes across the world as they got connected by faith, remember: God does not only desire His children to believe His Word but also to confess His Word. Believe and Confess, in Jesus’ name!