A TRUE CHRISTIAN IS TESTED - The Synagogue, Church Of All Nations - SCOAN - Prophet T.B. Joshua (General Overseer) Skip to content 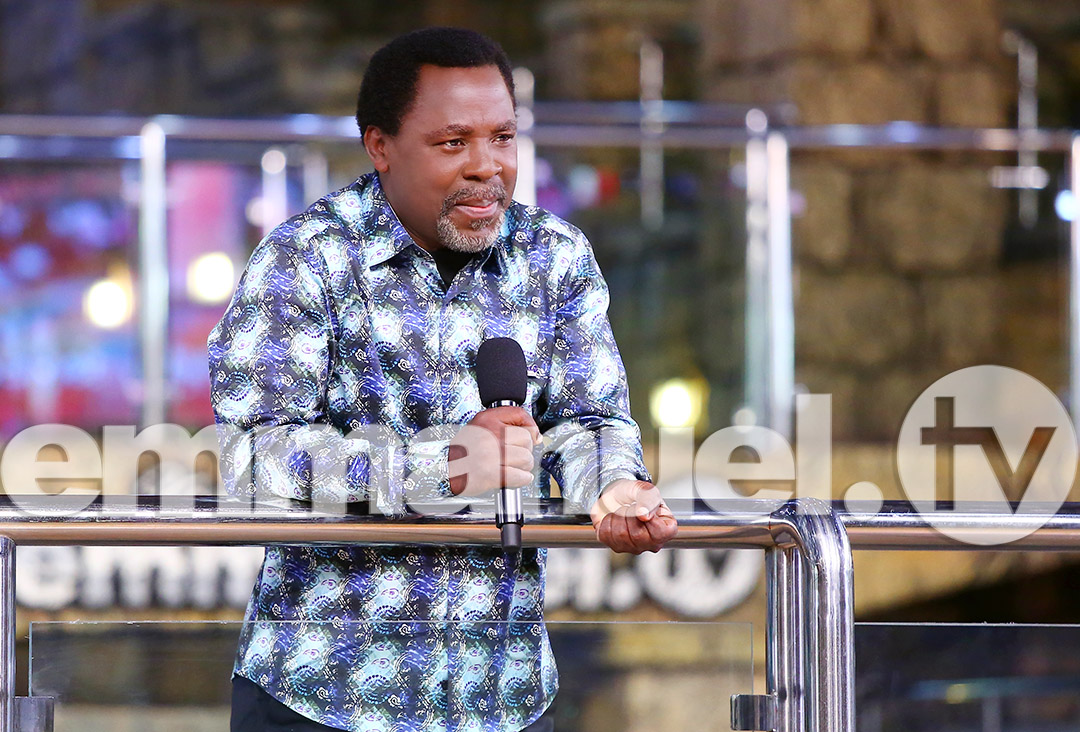 From the four corners of the Earth God-seeking worshipers converged at The SCOAN. With The SCOAN Choir, they sang of bringing their guilt and grudges before the Lamb so the Spirit could pray through them. Switching the tempo, melodious voices also sang of love for the Lord, the Giver of breath who blesses us with joy and everything good, and helps us to overcome life’s challenges.

Regarding the inevitable challenges that confront Christians, Prophet T.B. Joshua exhorted the congregation to ignore their problems and focus on their Redeemer. He said that situations are meant to improve, not impair, Christians. Backing this up with Scripture, he cited John 16:33 and Luke 22:32, and reminded all listening not to expect Jesus to maintain what He did not form. He emphasised that true Christianity is a matter of the heart rather than mere religious observances such as attending church and reading the Bible without being carried along by the Holy Spirit. Consequently, he said, a truly saved soul will face warfare from the devil but he will surely overcome if he focuses on the Redeemer. The prophet concluded: “There will always be issues that will challenge your faith. This is the beauty in our journey to eternal life, beauty in our journey with Christ Jesus.”

In his message ‘The Battle in your Thoughts,’ Racine preached about a major issue confronting Christians in their journey towards discovering God in His full glory: doubt, which is a product of the senses. Drawing from 2 Corinthians 10:2-5, he said, “Those who rely on sense knowledge and the senses cannot see beyond now. But those who operate in the spirit are those who rely on revelation truth.” Racine also urged believers to view the battle as the Lord’s. He further noted that what we think eventually becomes us, since thoughts have presence. According to him, “The thought in your heart – what you are thinking about – that’s where the endless battle starts.”

Racine therefore admonished Christians to discipline their heart by engaging it with God’s Word, as Prophet T.B. Joshua has so often suggested. For one’s heart to function as God’s instrument for discernment, it must suppress vain and idle thoughts, anger, offence and fits of rage. Quite instructive are the following words from the message: “When you know God’s opinion about your situation, life, business, marriage, you will fear no more, worry, doubt no more because that will impart a strength to endure whatever you’re going through, because Someone is aware.” He urged Christians to exercise faith in every situation.

FOUR-YEAR DISLOCATED SHOULDER, POPS BACK IN! 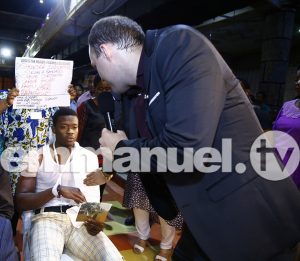 “It happened four years ago,” Ghanaian Mr Mumuni Siba began, as he told of how his right shoulder came to find itself in a sling. He had sustained the injury while playing handball. An opponent had pushed him while he was airborne trying to get the ball. The moment he hit the ground he heard his right shoulder pop out of its socket. His teammates quickly tried to push the shoulder back into place, but it never did fit fully back in. 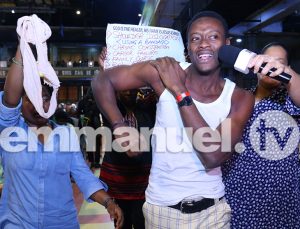 Despite seeing several doctors, Mr Siba failed to get relief and could barely use the arm. Believing in God’s healing power, he visited The SCOAN. After prophesying about Mr Siba’s unusually high interest in the opposite sex, a habit he developed after receiving a fetish object from a native doctor, the man of God prayed for him in Jesus’ name. Within seconds, Mr Siba started manifesting, struggling to free himself from those restraining him. Moments later, he calmed down and vomited poisonous substances from his system. Mr Siba said that he felt a surge of energy run through him as God healed him.

Instantaneously he began to exercise with press-ups on the aisle! Testifying a week later, he swung the arm over and over and did more press-ups to demonstrate his perfect healing in the mighty name of Jesus. Mr Siba confirmed the prophecies, and concluded by advising people not to seek God only when they are in difficult situations but to make Him a constant presence in their lives. 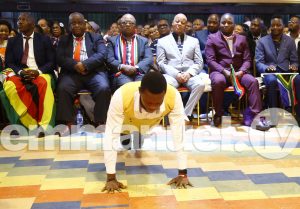 For a good seven years, Mr Bamark Amatus, also a Ghanaian, suffered the affliction of lumbar disc prolapse – a term which doctors use to describe one of the major causes of difficulty in walking. In his case, Mr Amatus had experienced the disc prolapse following a series of motor accidents. Like other people in his condition, he had to rely on a lumbar corset for a limited level of mobility. “I’m using a corset to reduce the pain but it is not solving the problem,” he confessed, hence his running to the Master Surgeon, Jesus Christ – after visits to several herbalists. 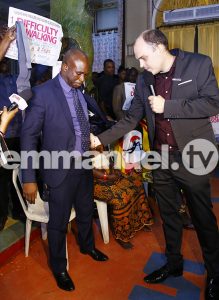 As a banker, he could not meet his targets as he was constantly absent from work. Asked about the whereabouts of his wife, Mr Amatus disclosed they had been divorced for the last 10 years and that he hadn’t seen the woman and their daughter. “You need to go and settle your home,” the man of God advised him before praying in Jesus’ name. After the prayers, Mr Amatus received his healing. During his testimony, he not only walked briskly to show his healing but also stated that his wife is now willing to have reconciliation talks with him. He advised people to trust in God always. 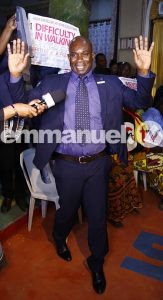 FOR AARON COLLINS, IT’S FREEDOM AT LAST FROM DRUG ADDICTION!

Very few eyes could have stayed dry after the testimony of Mr Aaron Collins, a US citizen who testified alongside his father, a member of The SCOAN family who never gave up on his wayward son over 13 years of riotous, reckless living on the fast lane of heroin addiction. Mr Collins’ journey to freedom had all begun with a prophecy by the woman of God, who said she could see blood on the 26-year-old’s hands. 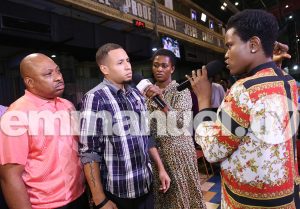 Aaron was aged 13 years when he first took marijuana, something he went on doing occasionally. However, three years later, he graduated to strong prescription drugs which his late grandfather had left behind. Although he wasn’t supposed to know anything about those drugs, the teenager had picked up knowledge about them from rap lyrics. After moving out of his father’s house once he turned 18, Mr Collins went deeper into the abyss of drug abuse as his ‘newfound freedom’ and access to money made it all easier for him. “I began to sell heroin,” he confessed, adding that he knew at least three people who lost their lives from the drugs he sold to them – a confirmation of the prophecy about having blood on his hands. When Mr Collins turned 21, and having fathered a daughter, he began to take heroin himself, egged on by his daughter’s mother. 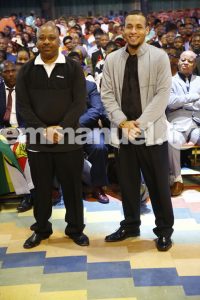 As a drug addict, he said, one has no consciousness of the passage of time as one sinks deeper into dependency. Thus, in 2016, he developed an abscess on his arm from intravenous intake of heroin, and he had to get emergency treatment. Visiting his son at the hospital, Mr Collins’ loving father suggested he move back to the family house. He agreed, taking his daughter along. A week later, he let his daughter’s mother use his car, even though he knew her license had been suspended and that she took drugs. Not surprisingly, she had an accident in which the passenger beside her died. Mr Collins also confessed to having overdosed on heroin about five times, and having gone to rehab at least five times. One day, he said, if not for his daughter, who somehow managed to get into the bathroom and alerted her grandmother, he would have died of heroin overdose. The little girl also saved him on another critical occasion. There was also a time when the young man flouted police regulations by travelling out of town during a seven-year felony probation. On his return, his dutiful father picked him up at the bus station and delivered him back to the police! For this action, Mr Collins did four months behind bars. Returning from jail, he found that his younger sister had died. On the day of her funeral, he got high again even though he had tried to remain sober. He equally confessed to stealing from his family and doing other bad things just to sustain his addiction. Explaining why he finally agreed to come to The SCOAN with his father, Mr Collins said: “I felt my time was coming to an end.” Speaking further on how God delivered him, he said he felt a major burden lifted off him as the woman of God laid hands on him in the name of Jesus. To cut a long story short, Mr Collins now has peace of mind as he apologised to his parents for stealing from them. In tears, son and father hugged each other before the cameras as many in the congregation failed to fight back tear drops. While Mr Collins advised youths to shun drugs and ungodly music while taking advice from their parents and guardians, his father L.G. Wise appealed to parents not to give up on their straying children. Indeed, this testimony is another proof that God is using The SCOAN not only as place of refuge and healing for many but also as the place for reconciling families by turning errant hearts to Christ.

FROM REJECTED STONE TO CORNERSTONE – A NEW LIFE FOR MRS KAMBOMBI 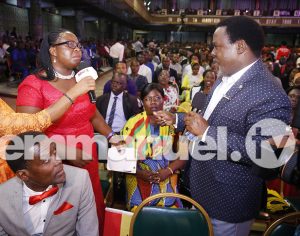 “How are you, madam?” Prophet T.B. Joshua greeted. “Fine, sir,” she replied – somewhat tentatively. “You are depressed,” the Spirit of God declared through him. For the then 34-year-old Zambian woman in question, this was the moment she had been waiting for. In a mixture of feelings comprising amazement, happiness and anxiety, Mrs Mweene Kambombi wailed: “Oh, man of God, thank you! We are dying in the family! I lost my husband; last week my sister lost her husband!” The prophet asked her to calm down; God was going to address her depression. In any case, God’s Spirit had already told him a third sibling also had no husband – a prophecy that was confirmed by the third sister sitting close by. That was two years ago. Today, the employee of the Zambian Ministry of Agriculture is a new creature in the eyes of God and men. Confirming her depressed mind when she visited The SCOAN, Mrs Kambombi said she was then “at the end of myself.” They had buried her brother-in-law only two days previously, she herself having been widowed 10 months earlier. Viewed from human eyes, her depression was therefore normal. The prophet prayed for her in Jesus’ name. “Everything about me just became new,” Mrs Kambombi said of the effect of the prayers. 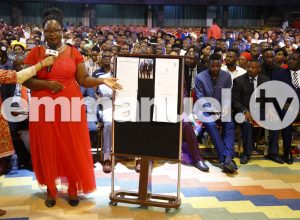 The first manifestation was in the compliments she started getting about her looks, as God’s glory began to reflect in her. More importantly, she began to experience open doors and showers of blessing. From being an obscure Inspector in the ministry, Mrs Kambombi has now been elevated to the status of Economist. In the past two years she has been nominated to attend high-level national and international meetings involving her ministry. Moreover, she is now in demand as an international consultant. Speaking of the professional and social recognition she has been getting since her deliverance, she said it was “as if I was unearthed from a grave.” Indeed, Mrs Kambombi’s case is like that of the rejected stone which later became the cornerstone. 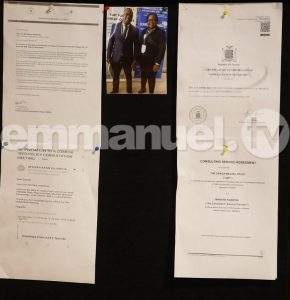