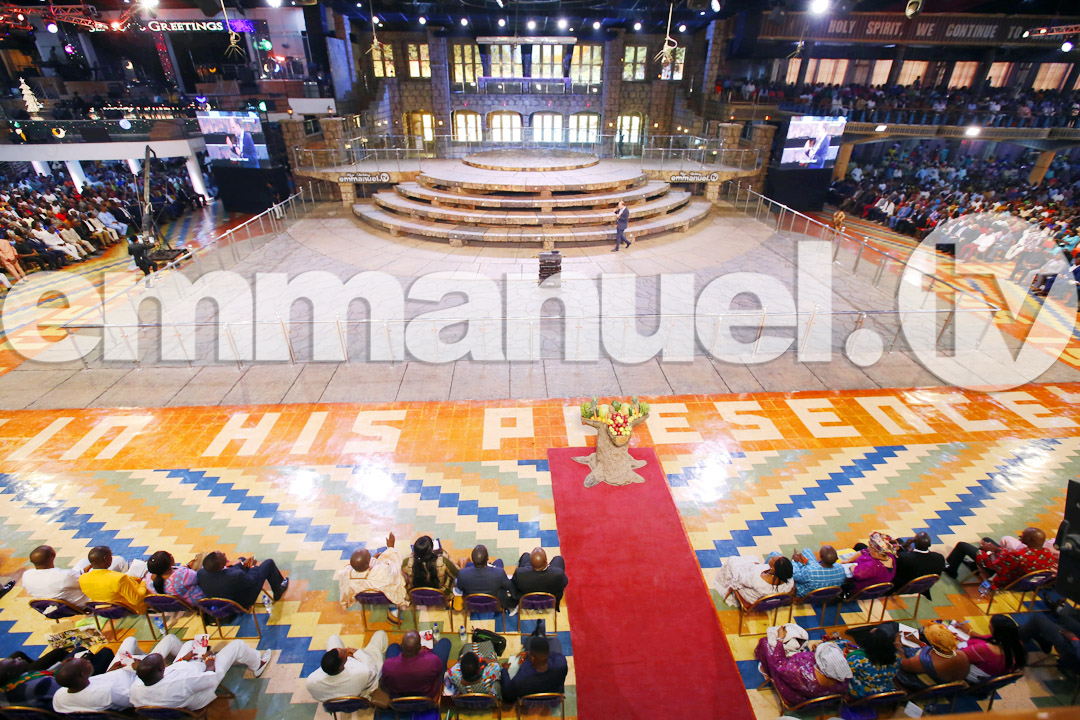 As usual, the Arena of Liberty was saturated with the Spirit of God on Sunday morning as congregants joined the SCOAN Choir in worshiping the Most High who reigns and makes the earth tremble. This first service of the year was indeed well attended by people from different nations who saw diverse manifestations of God’s power in the preceding year and are hopeful of being further touched this year. With songs that acknowledged God for all He had done, the choir and congregation sang of their gratitude for God’s past, present and future blessings in their lives. 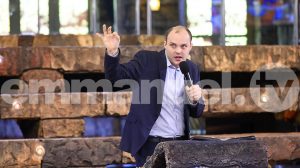 The message of the day had a short and simple title: IDENTITY CRISIS. Chris began by quoting Prophet T.B. Joshua’s observation that “few things are more dangerous than a person with an unexamined life”. The kernel of the message was that people need to be true Christians by having a meaningful relationship with Christ, not based on deception and outward appearances of religiosity. Taking his reading from 1 Thessalonians 2:3-6, Chris read: “For the appeal we make does not spring from error or impure motives, nor are we trying to trick you. On the contrary, we speak as those approved by God to be entrusted with the gospel. We are not trying to please people but God, who tests our hearts. You know we never used flattery, nor did we put on a mask to cover up greed—God is our witness. We were not looking for praise from people, not from you or anyone else, even though as apostles of Christ we could have asserted our authority.”

Chris addressed the tendency for Christians to behave like chameleons when they adjust their behaviour to suit the expectations of whomever they are with, so that they can earn the applause of men. He also advised congregants against allowing money to defile them in their bid to make it define them. Asking Christians to discard the world’s standards, he stated that the authentic Christian identity manifests as total dependence on God’s leading in everything. He therefore urged the church: “Let the Word of God become the database for your personal opinion. Whatever comes your way, go back to God because God and His Word can never fail.” Chris observed that many Christians still try to please the world when they should be focused on living a godly life at all times. He therefore reminded Christians that you plus God are majority saying: “If God be for us, who can be against us? If God be for you, who can be against you? If God be for a nation, who can be against her?”

MR ABOKHAI BACK TO JOGGING WAYS!

Sixty-eight-year-old Mr Allan Abokhai, from Edo State, Nigeria had a stiff neck and difficulty in walking due to lumbar spondylosis and muscle spasms. The medical solutions proposed for him were a neck collar, lumbar corset and a knee brace; the more he used them, the more he realised they were not the solution. For five years his life was virtually at a standstill, as constant pain prevented him from leading a normal life; the lean-framed man could not jog or do his work as a sand dredger. 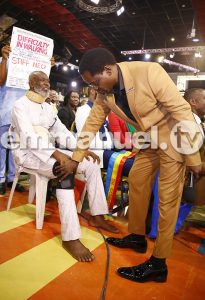 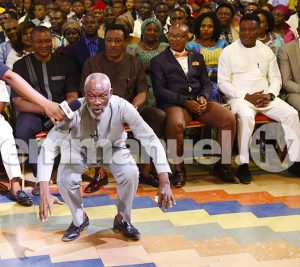 He therefore ran to God. During the word of prophecy, he was advised to “stop fighting” and turn a new leaf. Realising that the Spirit of the Lord had indeed revealed the message to the man of God, Mr Abokhai confirmed the prophecy to be true and smiled with relief, as if he knew his problems were already over. With the prayers done, Mr Abokhai sprang to his feet turning his neck from side to side, kicking the air, squatting and jumping. Grateful to God for having delivered him, Mr Abokhai advised people to stop doubting the efficacy of God’s power.

A HAMPER OF BLESSINGS FOR MERCY ADEYUNMA’S FAMILY

For the family of Mercy Adenyunma, it has been blessings galore since they turned to God for help and put aside human knowledge. Mrs Adenyunma had been bedridden for months after a motoring accident in which she suffered five fractures in her right leg. The doctors had assured the university lecturer that she would be able to walk within three days after the operation. Deciding to rather have a look of faith then lean on the arm of medicine, Mrs Adenyunma came to The SCOAN for prayer. As the power of God surged through the leg during the time of prayer, she screamed ‘Jesus!’ Seconds later she was on her feet thanking God with joyful tears. 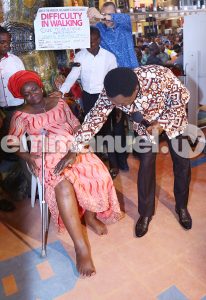 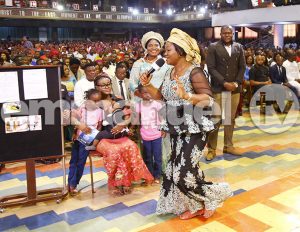 Testifying in church, she said she had felt her “bone crack into place” as the man of God touched her. In another testimony, Mrs Adeyunma told of how her twin girls had come pre-term in

2013, one of them with two holes in the heart and needing an open-heart surgery after eight months of their discharge. Although she was despondent about the baby’s chances of survival during the operation, she had decided she would go ahead with it. However, she got the New Morning Water from The SCOAN and kept ministering it to the child. When it was time for the surgery, the doctor suggested another check but to the doctor’s amazement the holes in the heart could no longer be found! 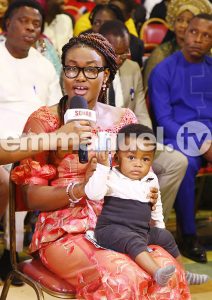 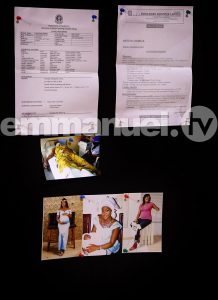 Mrs Adeyunma advised congregants and viewers to exercise total belief in Christ Jesus as they use their faith tools. Mrs Adenyuma’s family’s testimony was not done, however. Her sister, Mrs Blessing Onize also testified to God’s miracle in her life. The medical doctor had been unable to get pregnant, even though she had tried several procedures and the tests had revealed nothing was wrong with her. Not convinced about their reports, she kept probing and soon found that she had elevated hormones. Then her mother advised her to try God, and she visited The SCOAN, where she got the New Morning Water and started ministering it. To her amazement, she became pregnant within a month! Mrs Onize urged people to acknowledge the superiority of God’s power to human wisdom. Capping it all off, the mother of both women stated that the family had only shared a minute fraction of the divine blessings they have enjoyed.

FOR MRS KELVIN ORLU, IT WAS HEALING VIA THE SCREEN

Mrs Faith Orlu had hoped to receive her healing after having the man of God lay hands on her. Well, God had other plans, for He chose to heal her right there in her hotel room. In addition to having had an accident which affected her left leg, this Nigerian living in Greece had osteoarthritis of both knees and had become dependent on knee braces and a wheelchair for limited movement since 2004. 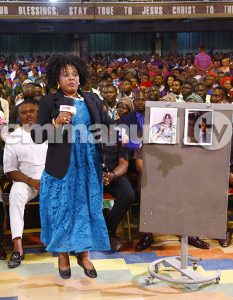 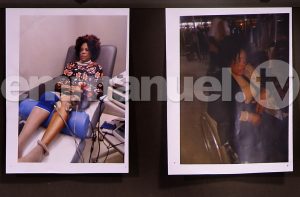 After surgery in Greece, she decided she would return to Nigeria for divine solution. In faith, she had found her way to the TV set in her hotel room and touched the screen as the Mass Prayer went on. At a point she felt a surge of electricity run through her body and she thought she had been electrocuted – indeed, by the power of God. Gingerly, after the prayers, she first removed one hand and then the second; then she felt her legs and found they were no longer numb. Her screams of joy attracted other lodgers, who marveled at the sudden transformation. Yet, that was not Mrs Orlu’s only testimony: her anal tumour also disappeared during the prayers! She urged viewers and congregants not to give up but to trust in God and believe their healing cannot escape God’s anointing.

FOUR YEARS OF BARRENNESS OVER

Mrs Sibongile Mmahtaji, from South Africa, was unhappy with her life because she had been unable to have a child after four years of marriage. She was particularly concerned because her husband, Louis, was an only child. A laparoscopy showed that she had cysts covering her ovaries, causing her menses to cease. 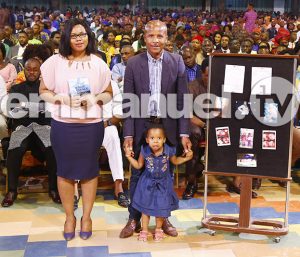 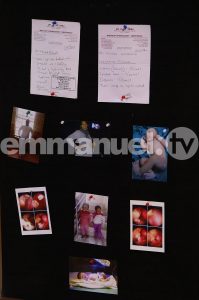 The doctors said they would burn out the cysts but they were not very certain about her ability to get pregnant after such surgery. At The SCOAN Mrs Mmahtaji had received the Morning Water, which she took back home and ministered consistently in prayer, asking God to heal her. Within a short while, the menses returned and Mrs Mmahtaji soon got pregnant. They named the baby ‘Prayer’ in their dialect. But God was not done with his blessings, as another pregnancy happened six months after Prayer’s birth – this time with a baby boy. Mrs Mmahtaji advised women wanting children to keep trusting in God, who will answer them in His time, in His name and in His way.

Mr Osamuyimen Ogiku, a Nigerian software developer, witnessed the manifestation of God’s promise in the Book of Psalms where He says ‘He will promote whom He will’. Mr Ogiku’s promotion had been set in motion as he participated in the Altar Service of December 2018 and followed it up by praying with his father’s Good Morning Sticker. 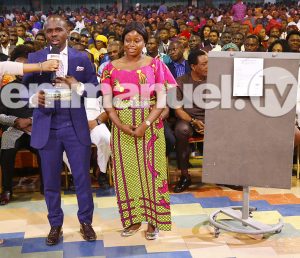 As he went to bed, he had a dream in which he saw himself praying on the altar and Prophet T.B. Joshua telling him that his request had been granted. In the dream Mr Ogiku had been praying for career advancement and God had answered him as the prophet told him. To his surprise, he was promoted alongside people who had spent between five and ten years in his workplace, even though he had worked there for only one year! Convinced beyond all doubt about the divine source of his blessing, Mr Ogiku asked the congregation and viewers to see the God of Prophet T.B. Joshua as the God of the impossible. He also advised them to pray with the Good Morning Sticker and not fail to share their testimony afterwards.