THE WORD OF GOD IN OUR HEART - The Synagogue, Church Of All Nations - SCOAN - Prophet T.B. Joshua (General Overseer) Skip to content 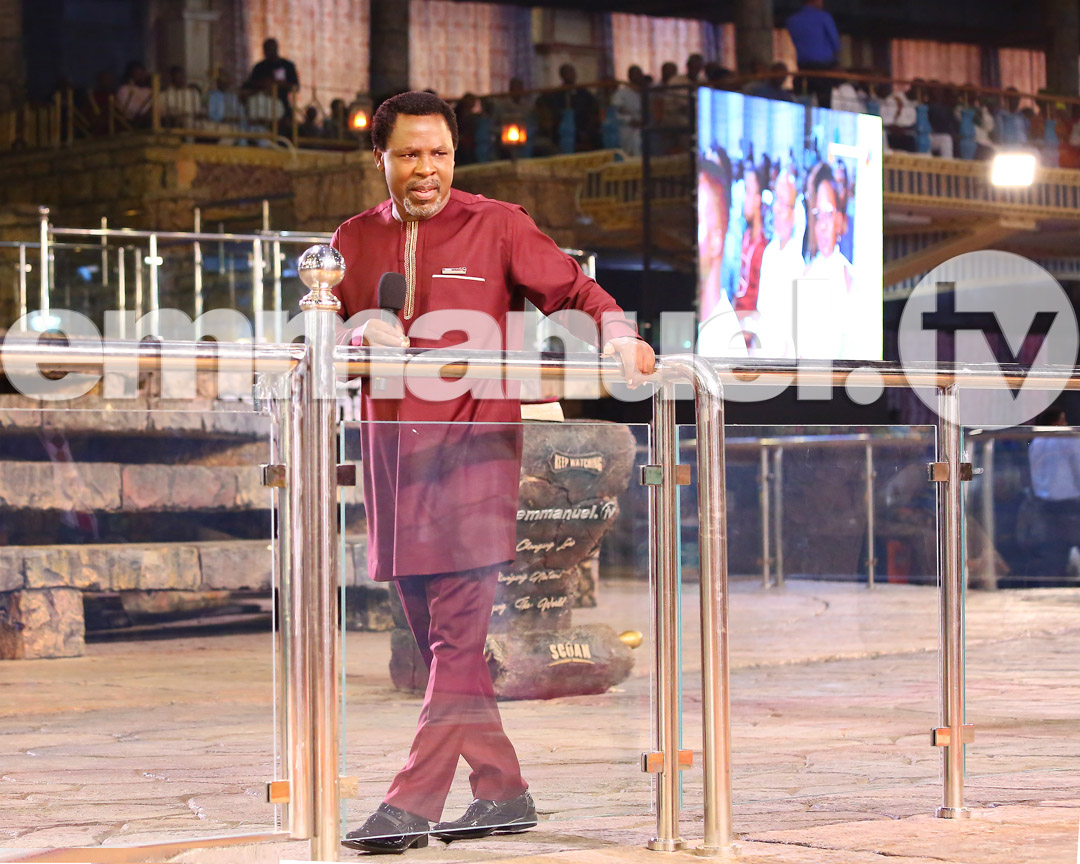 As 2018 gradually rolled away, the year 2019 was ushered in with ecstatic applause by The SCOAN congregants and viewers all over the world. The Choir reached into its rich linguistic repertoire. It was indeed an exciting and soul-lifting session as they let go of their inhibitions in praise of The Almighty God!

Through a thought-provoking message titled, The Word Of God In Our Heart, Prophet T.B. Joshua urged all to examine the state of their heart, for “Jesus tests our heart to give us according to our effort”. He added that to be true Christians, we must free our hearts of grudges, bitterness, bad feelings towards others as well as envy and jealousy, among other things which distance God’s spirit from most people professing to be Christians. Describing the manifestations of what he called ‘surface Christianity’, Prophet T.B. Joshua stated that one does not automatically merit the tag of ‘Christian’ simply by bearing a biblical name, carrying a big Bible, wearing a big cross, knowing facts about Jesus or by mouthing expressions such as ‘In the name of Jesus!’ and ‘Thank You, Jesus!’ Speaking further, he cited Colossians 3:1-3; 23-24, 1 Chronicles 28:9 and Luke 16:15, all of which point to the need to have the Word of God ingrained in their heart. 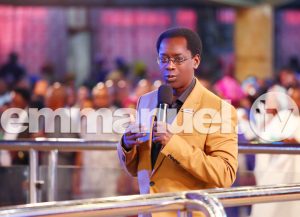 On his part, Racine, in a message titled, “An Extraordinary Relationship” told the congregants and viewers all over the world that love for God should be the basis of our relationships with others. He however identified some of the reasons why relationships are crumbling today which includes failure to make allowances for personality differences, being judgemental about the weaknesses of others, inability to forgive, failing to let love lead and inability to see beyond the present discomfort. Racine then gave a very powerful piece of humane advice: “Don’t reject anyone because of today. Where you are strong, I am weak. Where I am weak, you are strong. We are one another’s strength. If you reject anyone because of his weakness, you reject his strength”. 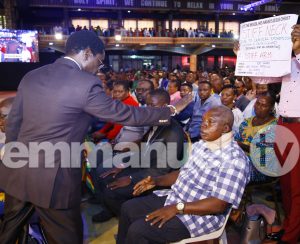 “This is wonderful!” so said Mr Asun Patrick, a Nigerian from Edo State who, for 20 years, had suffered from a stiff neck and stiff arm due to cervical spondylosis. Doctors had booked him for an operation to take place just a day before Jesus Christ healed him. All through the problem, Mr Patrick had relied on his family for most activities requiring movement. 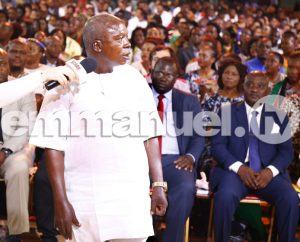 The word of prophecy concerning him was that he was under attack from household idols to whom he had refused to be dedicated. Since God’s touch, Mr Patrick’s neck now turns freely. Confirming the prophecy, he said his late father was a native doctor who had wanted him to take over the tradition. He finally exhorted the congregation and viewers to trust in the Lord.

NOW, MY LIFE IS BACK TO NORMAL 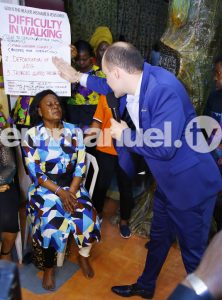 Before she came seeking God at The SCOAN after stumbling on Emmanuel TV via the internet, Ms Emilia Efang Baca Mangue had for three years suffered from a barrage of ailments. She had difficulty in walking due to lumbar stenosis; she also had thyroid problems which made it difficult for her to eat, while a leg deformation left her with a swollen thigh. As such, she had to wear a lumbar corset round her waist and use a brace to support her lower leg. The 49-year-old Equatorial Guinean who lives in the United Kingdom had expressed faith in God’s healing power. 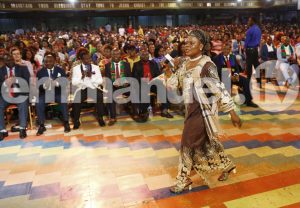 Prior to her healing, Ms Mangue had constant severe back pain and could hardly do her work in the barracks deprived her of a normal life.

However, after being prayed for, Ms Mangue demonstrated her healing by strolling across the aisle and swaying her body from side to side – things she last did three years ago! She advised people to seek Jesus, Who alone can heal.

AILING LEG AND BACK REJUVINATED 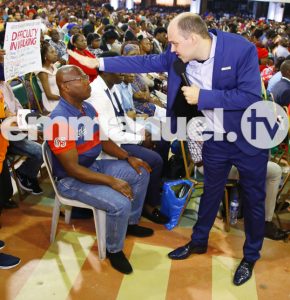 You could tell from his limp and the strain on his gait that Mr Ben Lawson Nugor, a 55-year-old Ghanaian living in Sweden, did not find it easy walking. He had a sciatica problem which was discovered four years ago, as well as hypertension. He got a lumbar corset and medications for his conditions, but all to no avail. He ran to God at The SCOAN where a prophetic message from the man of God revealed that Mr Nugor had broken a woman’s heart many years before and she had cursed him. 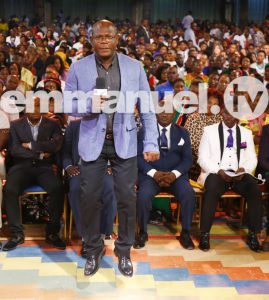 He was then prayed for and he received his deliverance. In church to testify the following Sunday, Mr Nugor came spruced up and no longer stressed, even jumping up several times in front of the cameras.He confirmed he had broken a young girl’s heart after she got pregnant and urged people not to doubt Jesus’ healing powers.

SICKNESS – NOW A THING OF THE PAST! 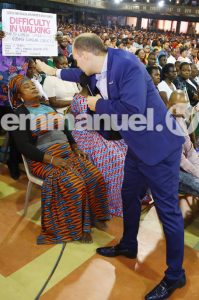 Mandu Ebenezer, a Nigerian, had difficulty in walking owing to lumbar spondylosis. The previous week, a friend had invited her to The SCOAN, where God healed her. Squatting, walking and dancing – Mrs Ebenezer can now do all of these. 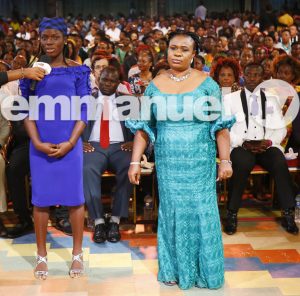 Hitherto, she had had to be assisted to do the most basic of things, including bathing and dressing herself up. Her niece, Deborah Daniel, confirmed Mrs Ebenezer’s reliance on drugs and a lumbar corset, in addition to observing a strict diet regimen. But all of that is now in the past. Mrs Ebenezer beamed joyously as she advised people to put their trust in God. 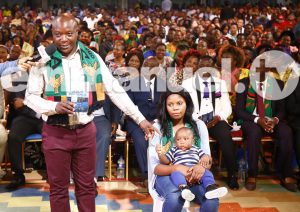 Before Mukuka Kalunga, a Zambian, received God’s touch, he had virtually given up hope about his ability to father a child. Which man would not have been shaken after his wife of 12 years left him because he couldn’t make her a mother? The doctor’s verdict to him was: ‘Sorry, you have zero sperm count, Mr Kalunga’. Undaunted, Mr Kalunga had married another woman but the problem persisted. Then he came to The SCOAN after finding Emmanuel TV. He was prayed for by Prophet T.B. Joshua and also received the New Morning Water which he ministered. Getting back to his country, he went back to the hospital for a test  and the same doctor found that the sperm count had been boosted. Amazed, the doctor asked, “What did you do?” Proudly, Mr Kalunga declared that he had sought God’s help at The SCOAN. He therefore urged the congregation to trust in God, with bouncing baby boy Elisha settled gently on his mother’s loving lap. 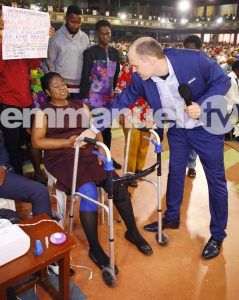 Sixty-four-year-old Mrs Juliana Agha Miller, from the United States of America, had spinal stenosis and acute arthritis of both knees, in addition to numbness of limbs, fibroids, hypertension and a cyst in the kidney. To make the slightest of movements, she had to rely on a walker and knee braces. Needless to say, she couldn’t do her work as nurse. The man of God prophesied that she had the spirit of death lurking around her and that the devil had tried to scuttle her journey to Nigeria. Mrs Agha Miller confirmed she had recently lost an aunt and that she had found it hard to raise her airfare. In the company of her son, 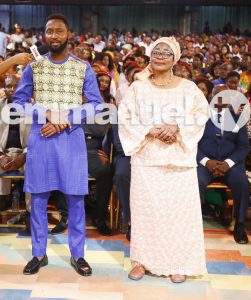 Mrs Agha Miller testified in high spirits as she narrated how, during the healing, she felt a sensation, like an electric shock run through system and instantly, she was healed. Mrs Agha Miller expressed delight that she can now help her patients when she returns to the USA – something she could not do for over 10 years. Glory be to God!

AND HER BREAST LUMP VANISHED!

The discovery was ominous: a lump in 13-year-old Princess Udochukwu’s breast. She was in severe pains and couldn’t concentrate in school. The medical solution? Operation. But her mother, Mrs Esther Udochukwu, said no. And she ran to God. On the 25th of November, Mrs Udochukwu partook in the Living Water Service at The SCOAN. 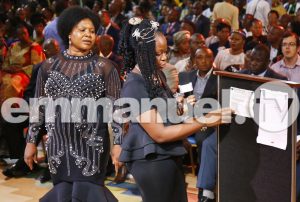 She took some of the water and her daughter started ministering it to herself. Shortly after, Princess returned to the hospital and the doctors could no longer find the lump, despite all their probing. After testifying, Princess and her mother were unanimous in urging the congregation to believe in God. 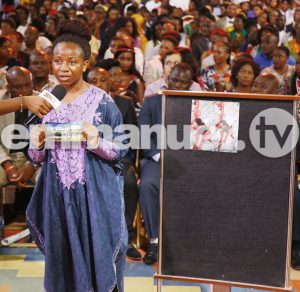 During the service of the 23rd of December, the man of God had supervised the sharing out of the New Good Morning and Let Love Lead stickers to the congregation. As many received it, they fell under its supernatural anointing, manifesting by vomiting and bleeding out their various problems.

One of the recipients of the New Good Morning sticker was Mrs Claudina Nsuga Ngumu Eyang, a young wife from Equatorial Guinea. After two miscarriages, she could no longer stand the reproach from people. She came to The SCOAN and God touched her via the New Good Morning Sticker. As she returned to her lodgings and retired for the night, she placed the sticker on her belly. When she woke up in the morning, the fibroids she had had dissolved out of her womb! Now her stomach is no longer swollen and she feels so light. According to her, it felt like a three-kilogram weight had been taken off her. Mrs Nsuga advised young women like her to seek God and wait for His time.