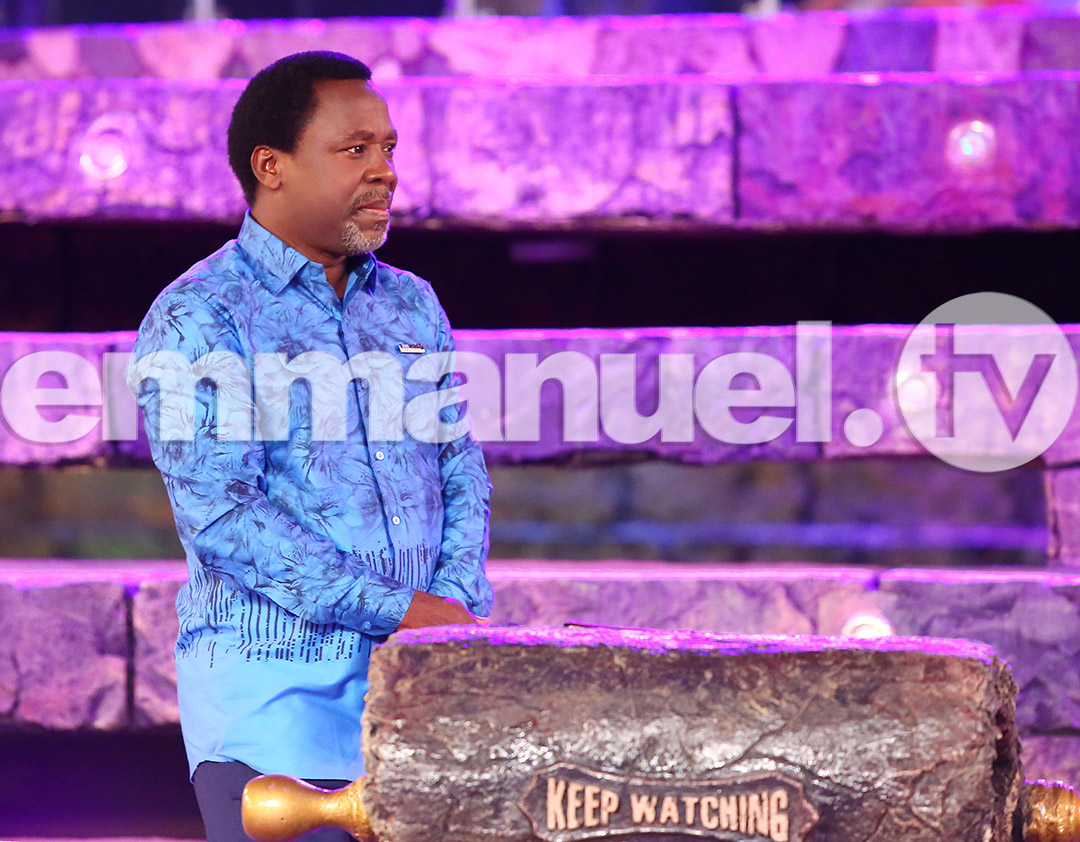 It was an exhilarating service on Sunday morning, being just two days to Christmas 2018. One could literally feel the fever of Christmas around The SCOAN with all the beautiful decorations and fascinating illuminations of various hues which make Christmas the unique festival that it is – a time to give gifts and to receive gifts, a time to visit and to be visited and, most importantly, a time to forgive and to be forgiven, that is, a time to let go of pain of the past!

As always, the people had thronged The Synagogue, Church Of All Nations in their numbers, seeking to have that once-in-a-lifetime experience with God. Ensconced in the Arena of Liberty, the congregants joined The SCOAN Choir in making a joyful noise to the God of all flesh. As the church sang on in adoration of the Almighty, His Spirit descended upon the congregation and the thrill knew no bounds as people of all nations rolled up their sleeves and tied up their wrappers as they waved their national flags and swayed their bodies in reckless abandon to music for the soul.

To the glory of God, Prophet T.B. Joshua made the most of this opportunity to speak God’s hard truth to His people. Discerning popular misperception about the essence of Christmas, the prophet warned, “If you give to people, to your neighbour because you expect them to give to you in return, you give wrongly”. And, for a few seconds, there was palpable silence in the hall, for the man of God had touched a raw nerve there. Speaking in edification and for correction, the prophet added: “Never come around people just because of what you can get but come around people because of what you can give, because it is more blessed to give than to receive”. Then the prophet’s message sank in and the congregation applauded, their consciences having been so sharply yet compassionately pricked.

The man of God explained the spiritual significance of generous, sacrificial giving and demonstrated it by supervising the distribution of the New Anointing Stickers to all the worshippers. In demonstration of God’s anointing on the new stickers, many congregants began to manifest as evil spirits came out of people and poisonous substances were vomited by many. Citing Acts 20:35, which says, “It is more blessed to give than to receive”, Prophet T.B. Joshua admonished the congregation to invest in the lives of people as this would speak for them tomorrow and in the future. 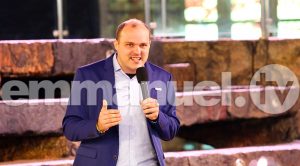 Earlier, Chris had inspired the congregation with a powerful message on what should be the major focus of Christmas: our relationship with Christ, who laid down His life in atonement for our sins. Titled ‘O Come Let Us Adore Him’, the theme of the message was taken from 1 John 4:9-11 – “This is how God showed His love among us: He sent his one and only Son into the world that we might live through him. This is love: not that we loved God, but that he loved us and sent his son as an atoning sacrifice for our sins. Dear friends, since God so loved us, we also ought to love one another.”

In his usual manner of teaching by demonstration, Chris invited four people onto the altar and assigned them characters. The first person played God, the second played the role of money, the third played the role of social relations and the last played the role of position. After portraying several different scenarios which are now common among Christians, Chris concluded that many Christians have allowed God to be replaced in their lives by money as well as social relations and social status, among other distractions. Noting that, today, Christmas has been so commercialised that people forget to focus on God’s love during the season, he exhorted the congregation to “seek first his kingdom and his righteousness, and all these things will be given to you as well” (Matthew 6:33). Chris asserted that life does not begin with a relationship with people but with a relationship with God and that relationship overflows to people. He therefore concluded that if we accomplish anything good in the future, it will only be because of our love for Jesus, who is The Way and not a way. No doubt, the message prepared the ground for the further manifestations of God’s incredible power which followed.

I CAN WALK FREELY AGAIN! 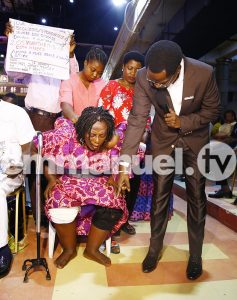 Last week, Janet Tsedey, from Ghana, had come to The SCOAN seeking the face of God for healing from lumbar spondylosis and arthritis and was using a lumbar corset and knee braces. She had literally been carried to The SCOAN by her sister-in-Christ, Alliston. Mrs Tsedey was located by the man of God, who prophesied that she had been under a curse before praying for her deliverance, in the mighty name of Jesus. After the prayers, 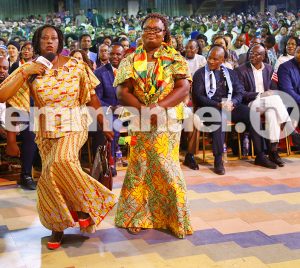 Mrs Tsedey began to vomit poisonous substances from her system. Testifying in absolute joyousness, Mrs Tsedey showed how perfect her healing had been as she kicked and punched the air, even twisting and turning her waist, to display her new-found energy and nimbleness. Three days earlier, like a bird just released from captivity, Mrs Tsedey had sprung to the nearby market with her sister-in-Christ – just to savour the joy of being able to walk without human assistance or her knee braces and lumbar corset. Not wanting to be a selfish receiver of God’s unceasing blessings, Mrs Tsedey counselled congregants and viewers: “If something happens to you, don’t run away from God; run to God and you will be free and your generation will be free, in Jesus’ name.” 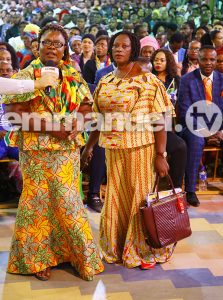 Alliston, Mrs Tsedey’s sister-in-Christ, confirmed the excruciating pains that the latter had experienced prior to her healing. “When we came here, I had to hold her to walk, hold her bag and support her in every way; she couldn’t even sleep and kept tossing and turning in bed,” she said. Alliston gave all the glory to God as her friend can now sleep as peacefully as a baby and do everything by herself. For Mrs Asabat Benedict, a 44-year-old from Kaduna State, Nigeria, life had been very miserable for over two years. She had degenerative disc disease, which meant that she could hardly walk or do her duties as a secretary so as to take care of her children. Thinking that her condition required human solutions, 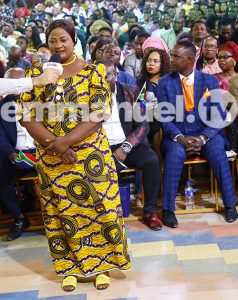 Mrs Benedict had run from pillar to post – from doctor to doctor and from healer to healer – seeking to be freed from the terrible burden of inability to walk. However, all the doctors could give her was a lumbar corset and many drugs which became her daily nightmare. She finally sought God at The SCOAN, pleading that the man of God should help her. 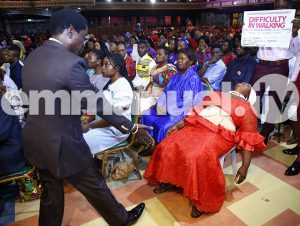 Directing the glory to Jesus the Healer, the man of God told Mrs Benedict that only Jesus could help her. Before praying, the man of God gave the word of knowledge that Mrs Benedict had been under the affliction of cowry powers, into which she was initiated as a child. He also said that the evil powers were threatening her marriage through ‘a giant man’. To give her testimony, Mrs Benedict strolled majestically through the aisle as she beamed broadly into the camera giving a double thumbs up to the viewers. Glowing brightly in her yellow dress and accessories, 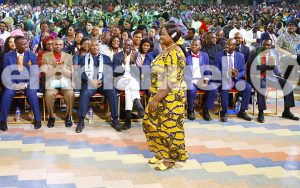 Mrs Benedict emphatically declared herself free from all pain as she confirmed both prophecies to be true. Mrs Benedict urged people all over the world to seek God so He can grant all their heart’s desires.

NO LONGER AN INVALID IN A FOREIGN LAND 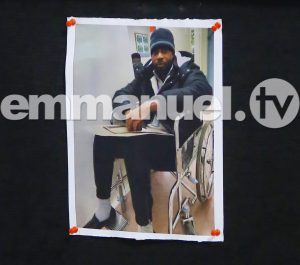 A Nigerian living in South Africa, Anthony had suffered a terrible workplace accident which left him unable to make any movement without the use of crutches and a lumbar corset. For the first three days after the accident, 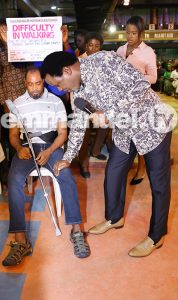 Anthony was virtually paralysed. In the accident, the discs in his spine had shifted causing compression in his nerves – a very painful condition indeed. Not only could he not do his daily activities as a result of the problem, he also could not go to his place of business. Consequently, life became almost unbearable for him and doctors booked him for an operation. Referred to various doctors and specialists, Anthony still could not find a solution to his condition. Eventually, 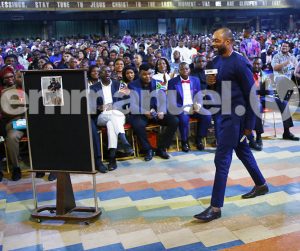 he ran to Jesus the Master Surgeon, having been following Emmanuel TV. At The SCOAN, the man of God prayed for him and instant surgery was performed on his spine and legs by the Holy Spirit. Testifying at The SCOAN, Anthony was all smiles as he faced the congregation to attest to God’s incredible healing power, walking briskly and squatting to demonstrate his perfect healing to the world. Concluding his testimony, Anthony said he respects doctors for their efforts but he knows that God remains the Master Healer to whom all of us should run in situations of crisis. 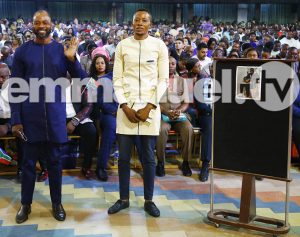 His younger brother, Best, thanked God for saving the family from a very trying situation.

All of the glory goes to Emmanuel, God with us!