THE ILLUMINATION OF THE SPIRIT - The Synagogue, Church Of All Nations - SCOAN - Prophet T.B. Joshua (General Overseer) Skip to content 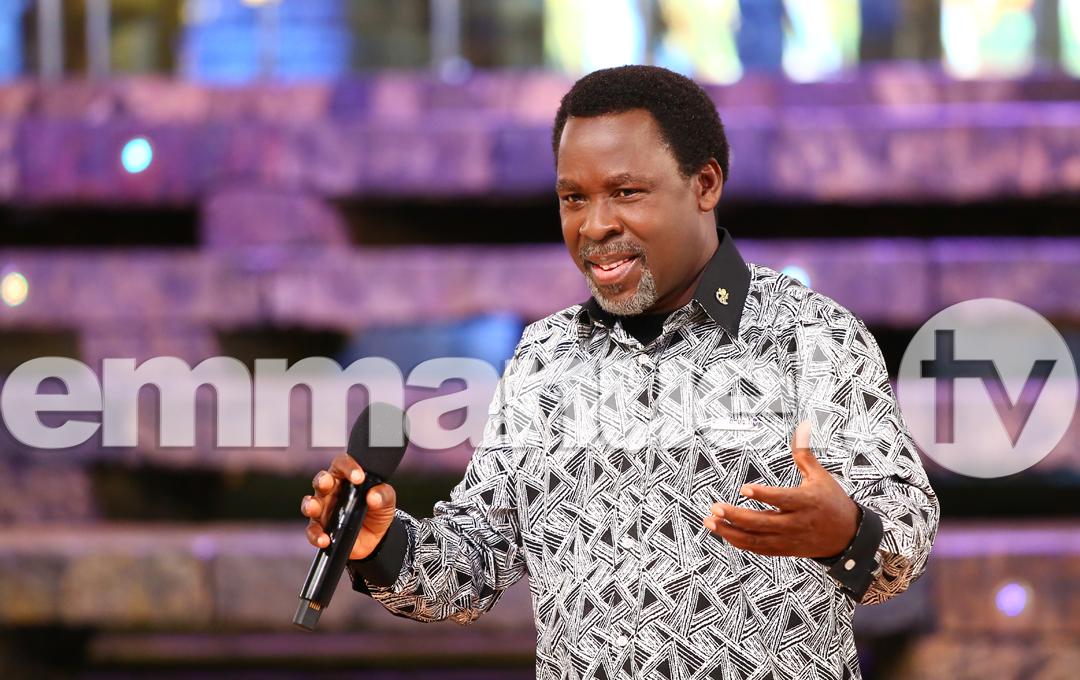 The overwhelming presence of God was evident and obvious at The SCOAN service, leaving no room for the devil’s antics. The sermon, as usual, started with a strong exhortation as congregants were encouraged to cheer up one another and to show appreciation to the Grand Congregator of His people, Jesus Christ. In a message titled, ‘The Illumination Of The Spirit,’  Racine preached, “There is a difference between knowing about God and knowing God. One can be convinced that Jesus is the Son of God and still never find Jesus. It is the Spirit of the Father who reveals God to us”. Reading from the Book of Acts 10:9-15; 19, he said, “Cornelius, a Gentile, had a divine appointment with God. God gave him a vision with impure animals, asking Peter to kill and eat. Peter’s mind resisted the vision three times because he could not understand it. Meditation brings revelation. Verse 19 says while he was busy thinking deep about the vision, revelation came, intimation came from the Holy Spirit. Immediately Peter heard, ‘God was with them; don’t doubt’, he acted upon the instruction of the Spirit of God. Revelation brought conviction and real movement: Peter stepped out in faith and assurance and went to the house of Cornelius. When Peter arrived and began to speak, the power of the Holy Spirit descended and salvation came to the household of Cornelius. They were baptized in the Holy Spirit”. 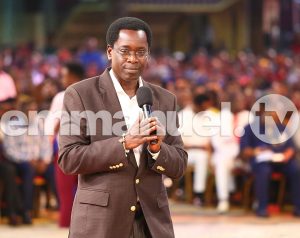 Racine continued, “What lessons can we learn from Peter’s experience? We cannot obey the written Word without the help of the Holy Spirit. The human nature, the man of the mind and intellect cannot understand nor receive the things of the Spirit because they are spiritually discerned. Jesus said in Luke 17:20-22, ‘The Kingdom of God is within you’. The Kingdom of Light is known to us by divine revelation. How does this revelation come? It is not all up to God and certainly, it is not all up to You; you have a role to play. Your role is meditation”.

Congregants were advised to pay attention to the screen where they would see faith-strengthening testimonies.

The heading above portrays the experience of two Zimbabweans, mother and son, who took residence in South Africa. Let’s see! While the service was going on, a demon-possessed woman was spotted. Fortunately, the evil spirit was severely attacked by a greater Force which compelled her to confess. 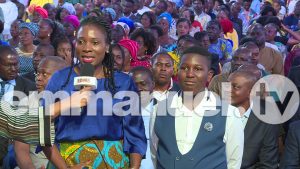 Under the control of the evil spirit, she confessed all the atrocities she had committed in the past, one of which had affected her son. With God’s intervention, the evil spirit was exorcised and she was completely freed together with her eleven-year-old son. Happily, Kutenda Kukunda Makwamaya and his beloved mother took turns in acknowledging the prophecy and deliverance by the man of God. The youngster admitted to being freed from depression which had affected his temperament and made him a victim of bullying, peer pressure and scorn at school. Worse still, some of his schoolmates maligned and conspired against him because he was excelling in his endeavours. Kutenda attempted suicide many times in order to save his face in the heat of the pressure. Upon receiving his divine healing, he admitted to forgiving his friends and allowing peace to radiate in his life. Asked if he would like to give words of advice to youngsters like him, Kutenda responded with a winsome smile and requested the Morning Water and Believer’s Card so as to build his faith. Tactfully, the man of God granted his request. Then, he gave his advice in the form of a melodious song, ‘Leave it for God! Don’t worry yourself! Leave it for God…’

Mrs Makwamaya also confirmed the prophecy given to her son. She added that the boy was in a serious psychological state. This made his parents to move him from his boarding school in order to help him. Still, his condition deteriorated. For instance, when he got 79% in Mathematics, he was very devastated. He scribbled on his paper, ‘You don’t deserve to live; you should die.’ Kutenda forgot all the advice and encouragements given to him by his parents and psychologists. 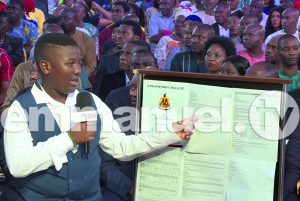 According to her, most times, Kutenda would lock himself in the room crying for divine intervention.  This emotional disorder was not permanent. Mrs Makwamaya expressed that her son now enjoys good health, satisfaction and inner peace. She, further, acknowledged her deliverance. She stressed that she had been tormented by an evil spirit which resulted in the death of her first child that died in the ninth month of her pregnancy. After the monumental loss, it was difficult for her to conceive. She stayed childless for two years! In 2006, she and her husband started watching Emmanuel TV and were motivated by the experience of Mary who was born under a seemingly impossible condition. She fervently prayed against a Caesarean section and stillbirth. God answered her; she conceived! Then, in August 2007, she gave birth to a bouncing, baby boy without a Caesarean section. In the end, she acknowledged that she was free and basking in health. Further, she thanked God for giving her a son who is doing exceedingly well academically and spiritually. Kutenda is a quintessence of diligence, dedication and discipline.

HEALED OF A STIFF NECK 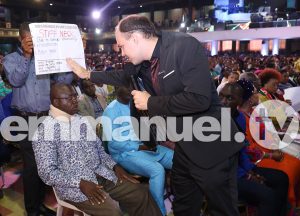 Healing was not limited only to Mrs Makwamaya and her amiable son. The wind of healing also blew on Mr Drisu Umoru, a 59-year-old man from Rivers State, Nigeria. He suffered from an acute stiff neck for 5 years! He made frantic efforts in order to ameliorate his condition but everything proved abortive. Then, he started watching Emmanuel TV and saw the need to seek God for healing. After narrating his pathetic ordeal, the man of God prophesied that Mr Drisu and his colleague were not on good terms and the aggrieved colleague had taken his photograph to some places in order to harm him. 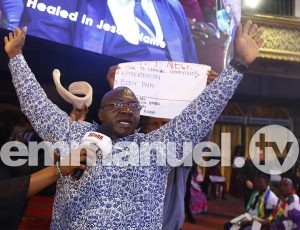 This resulted in terrible nightmares and discomfort. All of these, Mr Drisu admitted to be true. After encouraging all Christians to always pursue peace and good neighbourliness, the man of God healed him. There and then, Mr Drisu confirmed the healing, and thanked God for the amazing grace. Later, the man of God asked him to mention some of the things he couldn’t do before. First, he demonstrated that he couldn’t toss his head back and forth, left and right but can so now. The pains have now disappeared and the neck collar is now a butt of rubbish. Faruk, his son, was very happy and also thanked God before the congregation. Later, Mr Drisu advised viewers around the world, especially those suffering from one challenge or the other, to always seek God for their deliverance. 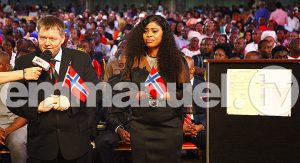 In 2016, Mr Geir Grytli, from Norway, said he was diagnosed with thyroid cancer. This illness afflicted him with excruciating pain and discomfort. For many months, he was weak and helpless. Perturbed about his state, he started watching Emmanuel TV for a lasting healing for he did not see an operation as one. In June 2017, he visited The SCOAN. There and then, Prophet T.B. Joshua prayed for him and he was healed! For confirmation, Geir visited a hospital for a scan and he was told there was no cancer any more in his body. Today, Mr Geir Grytli is free, strong and healthy. What a miracle-working God!

Many have argued that it is impossible to be healed of obvious, outer injury. The situation of Olufemi Daniel Olaegbe will definitely keep wagging tongues in their positions. One fateful day, Olufemi Daniel Olaegbe was travelling when he drove into a gang of robbers. As a result, he was shot in the face. This attack made him sustain a serious facial injury. His jaws, teeth and other vocal organs were all affected and blood was oozing profusely from his face. In pain, he managed to drive out of the scene and met a police checkpoint. As a result of the gory sight, the police were disturbed and sympathetic. They rushed him to a nearby hospital for prompt medical attention. There, Mr Olufemi was subjected to a series of surgeries. 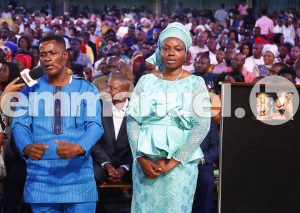 After everything, he was still suffering from pain. He couldn’t eat nor drink. With a burning faith, Olufemi thought his predicament can be dealt with miraculously. So, he visited The SCOAN. He recounted he had the opportunity to be at the Prayer Line where the man of God placed his hand on him. Immediately, he did that, Olufemi added that it was as if something was arranging the broken bones in his face. That day, when he got home, he had the urge to eat. This was an impossible feat before his encounter with the man of God.  His jaws and teeth started functioning well: He could bite, chew and swallow! This 50- year- old man thanked God for his divine healing. Mr Olufemi was thrilled by the miracle, and advised all to have faith in God and depend solely on Him.

Evidently, there is still a miracle-working God. No matter what the condition may be, Jesus is still in possession of superlative power and He is always ready to soothe our pains. Continue to have faith in Him. You can rest assured of lasting miracles.