NO REASON TO RUSH - The Synagogue, Church Of All Nations - SCOAN - Prophet T.B. Joshua (General Overseer) Skip to content 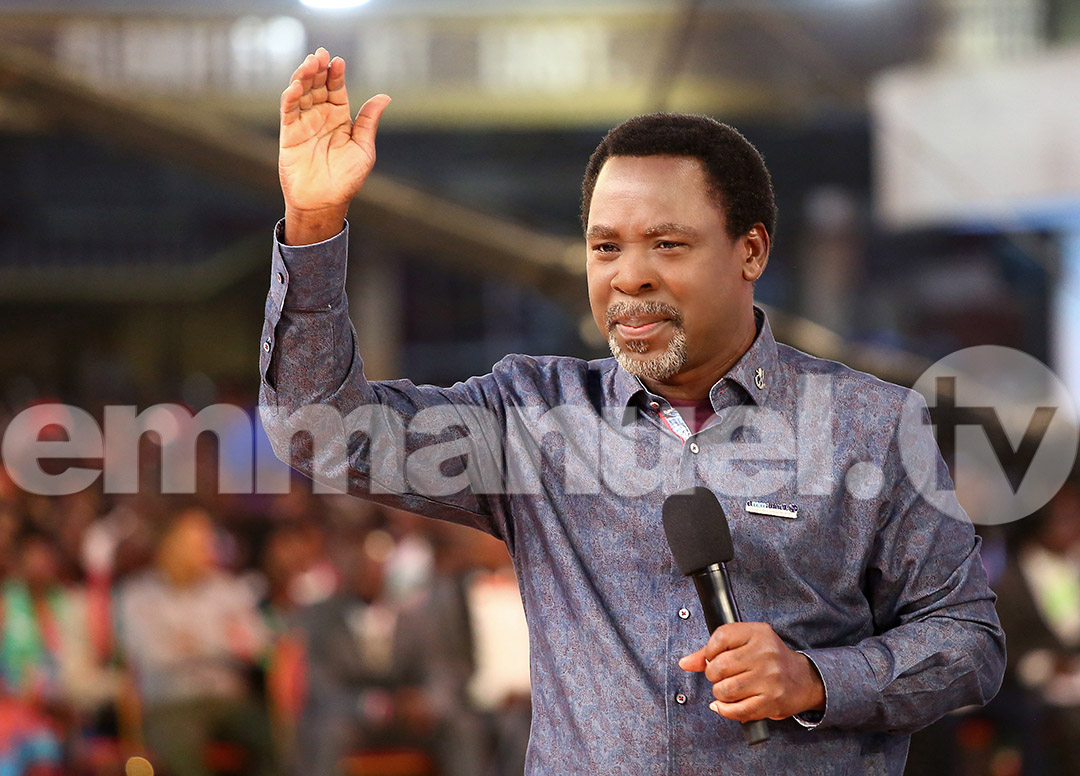 “You can see the climate of the presence of God,” Prophet T.B. Joshua exclaimed as he entered The SCOAN auditorium on Sunday, December 9, 2018. Indeed, since The SCOAN Live Sunday Service had started, the wave of Christ’s glory had filled the atmosphere – from the sanctuary to homes around the world through the broadcast on Emmanuel TV.

“Lord Jesus, rain Your power over me,” the congregation cried out, as the choir sang newly released songs composed by Prophet T.B. Joshua. The atmosphere was charged as Chris took the altar with a powerful message titled, No Reason To Rush. “Just check your life,” he implored. “Whenever you are in a hurry, you easily make a mistake and oftentimes, that mistake can be costly – costly mistakes that may pull you back or down…First and foremost, God’s response is not for those in a hurry. This means that we should be patient and let God answer us on His schedule not ours because at God’s time, everything is beautiful.” 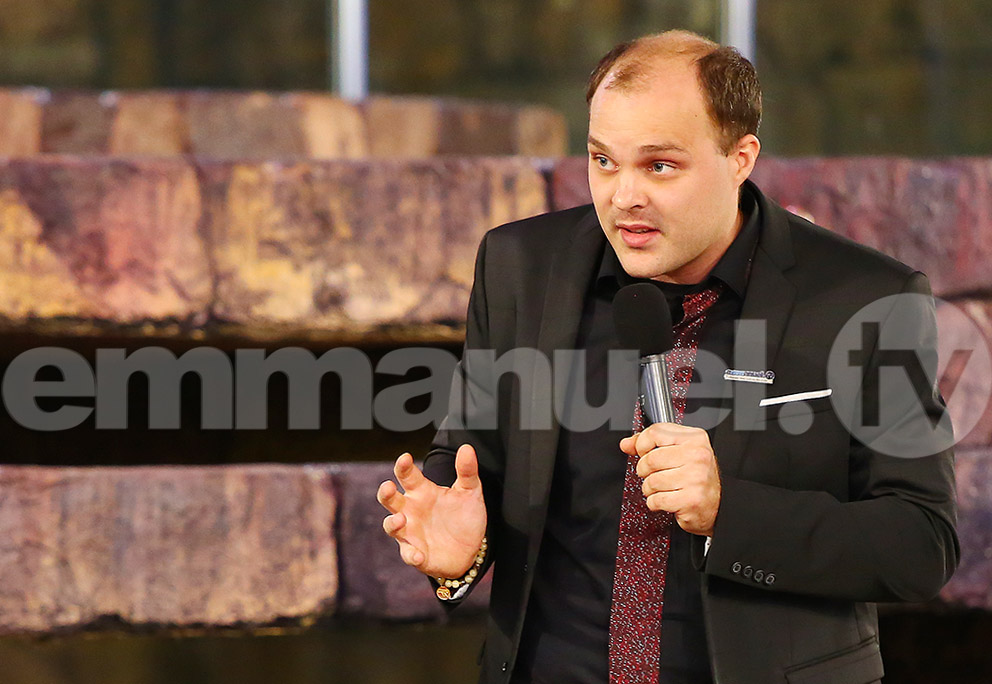 He explained the meaning of this message when he said, “You can have some levels of success but without preparation and time, you will face challenges that will tumble that success”. With a word of encouragement, he concluded, “God does not want any one of us to come to the end of our days saying ‘I could have been, I should have been, I would have been’. Work as if everything depends on you, pray as if everything depends on God. Combine hard work with quiet confidence in God for the future.”

With that compelling word, he stepped forward to those afflicted with sickness and disease and released the healing power of Jesus Christ into their systems. Lumbar corsets, walking aids, neck collars and bonds of all types were cast down as the name of Jesus Christ elevated people above their problems. The sick were healed, the lame walked and the captives were set free in a powerful demonstration of God’s goodness and mercy.

As the congregation rejoiced in what they were witnessing and experiencing, Prophet T.B. Joshua stepped to the altar with this affirmation, “The word a man of God speaks represent his heart desire. ‘Let there be light’ and there is light – that is a man of God… It is God’s Spirit that reveals Jesus. It is God’s Spirit that makes the Word work. The Word becomes a tool. If the Word is not according to the Spirit of Father, it will remain idle, meaningless and oftentimes destructive”. Speaking to the viewers, he said, “We need to know that faithfulness and trustworthiness of God and you have seen it today. Conviction must come. Conviction is the awakening of your heart – your conscience to the truth. I have seen God is the same yesterday, today and forever. Viewers all over the world, you have seen the downfall of satan. Glory be to God! Those under the bondage, dominion of sickness, disease – receive your freedom, in the name of Jesus. As he prayed, the yoke of satan was broken and lives were set free to the glory of God!

Among those who received their testimony are the following:

STIFF NECK, STRANGE VOICES STUNNED BY THE POWER OF GOD 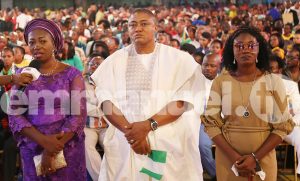 A severe case of cervical spondylosis resulted in a stiff neck and agonizing pain from neck to shoulder to spine. On top of this, she was forced to bind her neck in a stiff neck collar which did not ease at all the relentless pain she endured. A word of prophecy from the man of God in The SCOAN Prayer Line revealed she was suffering from an evil attack accompanied with strange voices. Confirming the prophecy, she received her deliverance and healing in a powerful word of prayer and demonstrated her healing instantly. Turning her neck side-to-side, Ms Edime glorifed God who had restored her original condition.

CHAIN OF SUICIDE AND OCCULTISM BROKEN THROUGH PROPHECY

Twenty years earlier, Mrs Ausrine Andrieke’s father committed suicide. For years, she, her mother and her siblings suffered a barrage of suicidal thoughts and nightmares. As she stood in The SCOAN Prayer Line, the man of God, Prophet T.B. Joshua approached and revealed this stigma through a prophetic message. 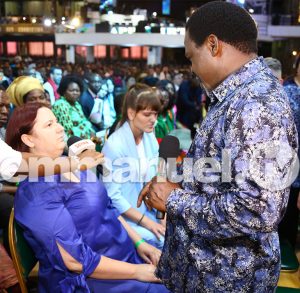 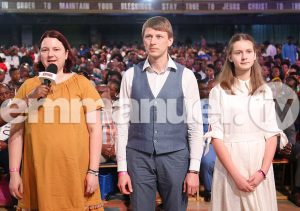 She confirmed the prophecy and, along with her husband and daughter, received deliverance in the powerful name of Jesus Christ. Her husband testified that the suicidal thoughts and nightmares are no longer tormenting his wife and as a result, she is able to sleep peacefully, just like a baby. He further testified that as a result of the power of God demonstrated through Emmanuel TV, he and his wife decided to burn their library of occultic books and start a new life in Christ Jesus. Truly, the Gospel of God’s grace challenges and changes everything! 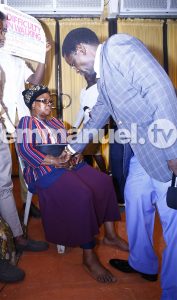 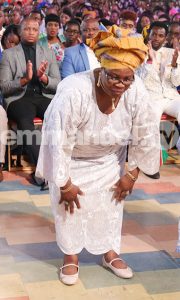 As the last recommendation for an operation was pronounced by the doctors, Mrs Clara Akintoye knew she needed to do something drastic. Turning them down, she opted instead to travel to Nigeria to receive prayer at The Synagogue, Church Of All Nations. Crippled with difficulty in walking due to severe back pain, she consumed various medication daily, all to no avail. Just one touch from Racine erased what science and technology could not. Walking and moving freely, she testified that when Jesus heals you, He heals perfectly and completely! Glory be to God!

I GOT A JOB AFTER PRAYING WITH EMMANUEL TV

Thirteen years of stagnation and limitation in her career could have grounded Mrs Maria Vaendwananwa to a halt. Instead, it encouraged her to speed up her commitment and devotion to God. Stumbling across Emmanuel TV one afternoon, she was inspired and had the channel installed permanently in her home. 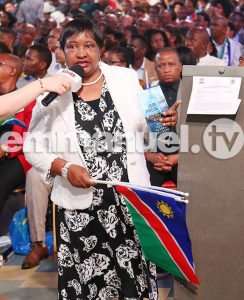 Further encouraged, she decided to visit The SCOAN and there she received the New Morning Water and returned home, armed to fight the spirit of backwardness, limitation and stagnation that threatened to swallow her. As she regularly prayed with Emmanuel TV and the New Morning Water, the yokes began to break one by one. Suddenly, a vacancy was announced for the post of Chief Regional Officer. She prayed with the New Morning Water, applied for the job and was miraculously accepted! Testifying, she joyfully confirmed that not only was her career advancing but so is her relationship with Jesus Christ! God’s strength was manifested in her weakness and limitation is a thing of the past! 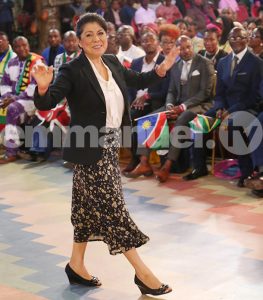 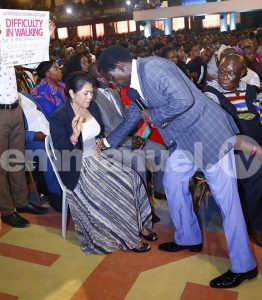 For one year, Pastor and nurse, Gloria Figueroa from the USA, could not walk without assistance. As her sickness progressed, she was prescribed strong pain killers and a lumbar corset. Nothing stopped the pain. Interrupted in her career and calling, she decided to seek the face of God at The SCOAN for solution. Seated, awaiting prayer for the problem of difficulty in walking due to canal stenosis, she suddenly heard the words, “I’m seeing you given a big responsibility and that responsibility you cannot carry out alone…” Confirming the prophecy with tears, she instantly received a touch from Heaven and the shackles were loosed, in Jesus’ name. The power of God reverberated through her body and she started shaking before she finally rose and walked without assistance. Rejoicing, she exclaimed, “I can stretch my arms, bend – all the things I could not do before…Jesus Christ is the same yesterday, today and forever. I am a living witness of that power in my life!”

Miss Aiodago Uises stood in The SCOAN auditorium for the first time. We would soon learn that although she was a newcomer to the building, she was not new to the ministry. Having been a viewer of Emmanuel TV for many years, she turned to the power of God flowing through the ministry for help in her career. In 2011 she had been accepted into a university but was unable to fund her education as her parents were retired and she had little income. She began praying with Prophet T.B. Joshua on Emmanuel TV and the Lord answered her prayer in unexpected ways. First, the university contacted her unsolicited and provided her with a scholarship. 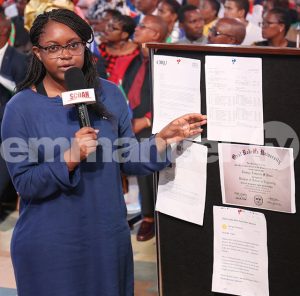 Next, a distant friend of the family contacted her and declared that he would pay the rest of the tuition, visa processing fees and flight ticket from Namibia to the US. Throughout her education, she continued praying with Emmanuel TV and every financial need was taken care of. After graduating with a degree in Science and Engineering, she applied for a job in Japan. She ministered the Morning Water on her documents as she prayed and was offered the job. Encouraging the youth to follow Christ, she said, “Giving my life to Jesus when I was young was the best decision of my life”.

As the power of the Holy Spirit continued to sweep through The SCOAN Auditorium,

individuals were set free from what had them bound.

As you continue to join the prayer on Emmanuel TV, gather back all that the devil has stolen. This is restitution, in Jesus’ name! 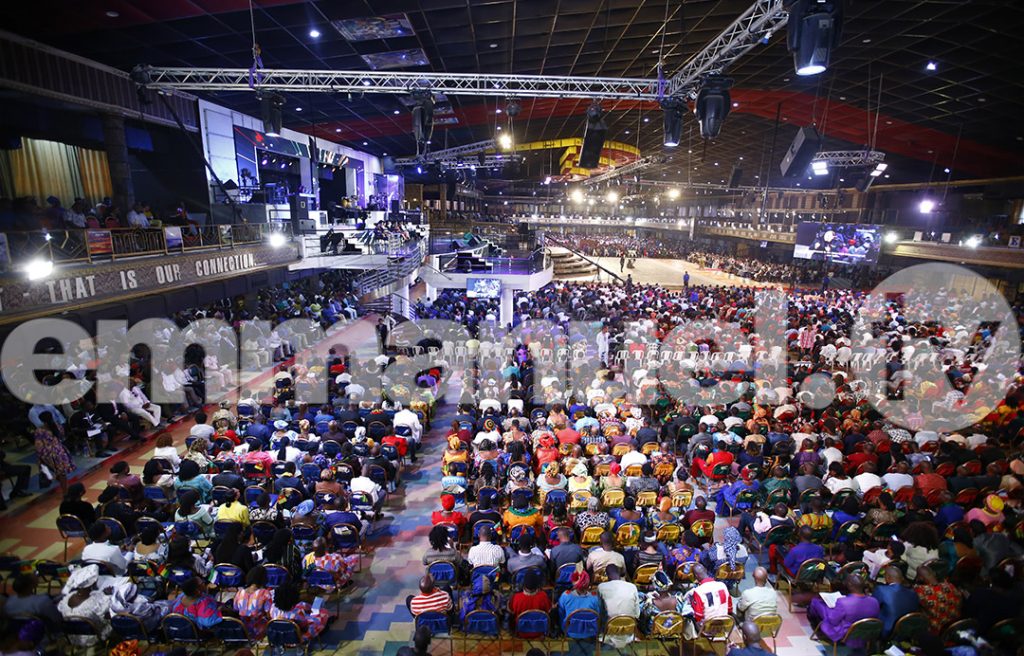