OUR HEART – THE LANDING PLACE - The Synagogue, Church Of All Nations - SCOAN - Prophet T.B. Joshua (General Overseer) Skip to content 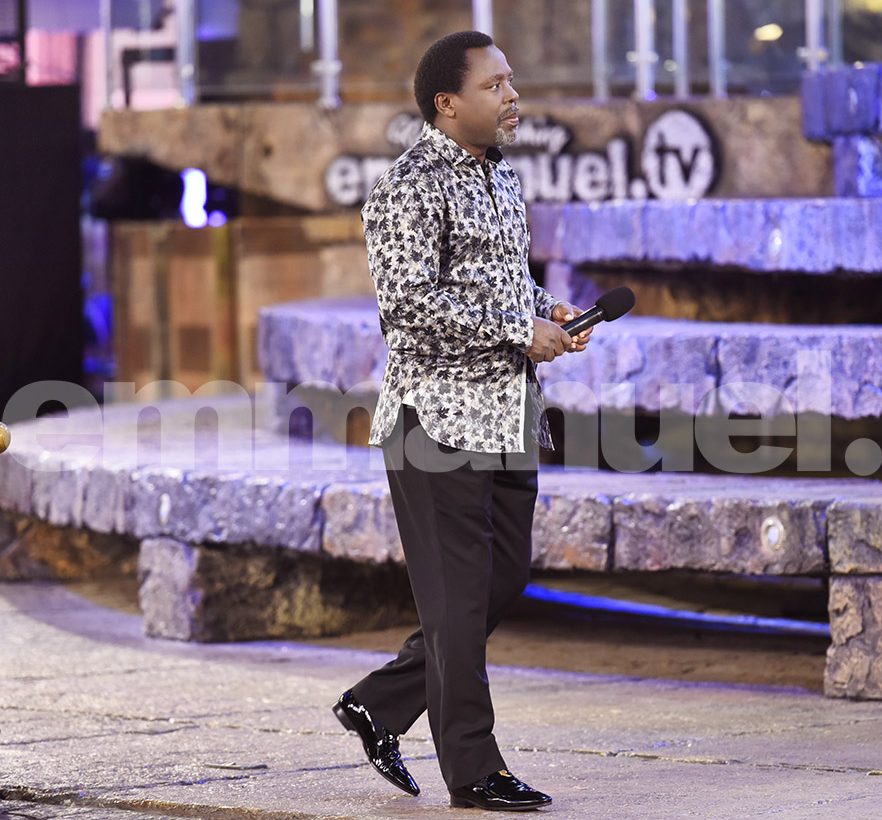 The sound of thanksgiving echoed throughout The SCOAN Cathedral as The Choir encouraged all to honour God for His work in their lives. They all came together to sing the song composed by Prophet T.B. Joshua, “Acknowledge God for what He has done, acknowledge God for the role He’s been playing. He will do it again! Cry no more; acknowledge God; He will do it again!” The joy was contagious as the people danced and sang because faith had done it; God had done it.

In a profound and deeply personal message, Chris asked the probing question: Why do we complain when satan strikes since most times we are the ones who give him the ball? Likening the journey of life to a football match, together with three volunteers from the congregation, Chris demonstrated how we can so easily give satan the ball when we give in to temptation and do not stand our ground against the adversary. He further explained that as children of God we should not even be playing games with temptation but firmly show the enemy a ‘red card’ by taking our place in the believer’s authority. “When the Word of God is in your heart, it will preserve and protect you from desiring sin,” he observed.

Chris further assured the congregants: “If satan today brings iron to block your way, God will bring a welder to cut a way out through the iron. God will not allow you to be tempted beyond what you can bear.”

Letting people know that they hold the key to their future in their hands, Chris emphasized, “No mortal man or devil can supersede the plan of God for 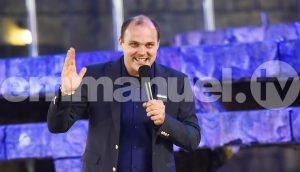 your life. There is only one person who can get you out of the will of God and that is you! One of the greatest gifts God has given us is the freedom to make decisions. As the Bible says in Romans 6:16, whoever you yield yourself to obey, that is whose servant you are.

Later on in the service, Prophet T.B. Joshua came onto the altar and advised the congregation and viewers to open their hearts to contact the Spirit of God. He said, “The heart is the prayer room, the temple of God. But today it has become a conflict room between the flesh and the spirit. There’s so much division for and against.”

Going deeper into the issue of the heart, the prophet explained that we can know we are praying by the state of our heart. “Our heart is the landing place. If our heart is at its best, that means a free spirit, a free heart.” Encouraging the congregation to forgive so they can gain a free spirit, the man of God said that whether we are right or wrong, we should forgive because this is our first covenant as Christians. In a striking word of wisdom, the prophet ended his words by saying, “Refusing to forgive is more dangerous to me than my enemy. Your enemy needs forgiveness for mercy but you need forgiveness for eternal life.”

After the Word of God was preached with power, miracles, signs and wonders followed as God worked through His servants to set people free from the bondage of sickness and affliction as prophetic messages were spoken into their lives. The secret of all the miracles is Jesus Christ!

This is a summary of the life-changing testimonies that were shared during the live service that shifted the faith of all who heard them to another level.

CHAINS OF SICKNESS HAVE FALLEN 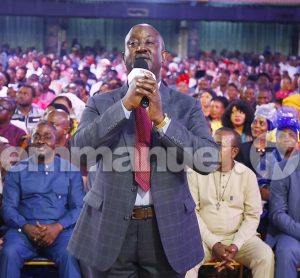 Mr Julius Mugisha from the USA came to The SCOAN with the terrible afflictions of stiff neck and sleep apnea. An accident had caused a shift in his neck bones, leaving him in severe pain and discomfort. As if a stiff neck was not enough discomfort, Mr Mugisha was also diagnosed with sleep apnea, a life-threatening condition which made his life even more miserable. While he had to endure excruciating pain in his neck and upper back, coupled with incessant headaches, he could not sleep at night as a result of sleep apnea. All the hospitals he visited in search of a solution to his problems were unable to provide any relief. The doctors only gave him a neck collar and breathing machine to manage his condition. He was told that to continue living he would be forever dependent on these supports.

Helpless in his situation, Mr Mugisha sought God’s divine healing at The SCOAN. He received prayer in the power of the Holy Ghost from God’s anointed servant that ended his predicament. Free from pain and discomfort, Mr Mugisha instantly walked in the light of his testimony, losing both the neck collar and the breathing machine he had depended on. In sheer delight, he proclaimed he would no longer need the breathing machine and neck collar. He therefore encouraged everyone to trust God at all times. 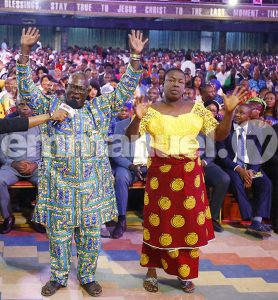 As the power of God touched Mr Patrick Ololo, the fire of the Holy Spirit consumed all sicknesses in his swollen body and Prophet T.B. Joshua declared him free in Jesus’ name. Suffering from a swollen scrotum and neck as well as from lymphoma, Mr Ololo’s body had been ravaged by these diseases for years. Treatment from the doctors could not end Mr Patrick’s torment. Realising that his problem was beyond the power of nature and that he needed divine intervention, Mr Ololo came to The SCOAN to seek the face of God for his healing. To his amazement, just one touch from the servant of God brought a total and complete healing to his life.

Coming back to show off his renewed self, Mr Patrick beamed with joy before the congregation and all could see the radical transformation as a once swollen body had become normal. Make no mistake about it: Your problem cannot embarrass Jesus, because He has a solution for you.

GOD IS NOT YOUR ENEMY 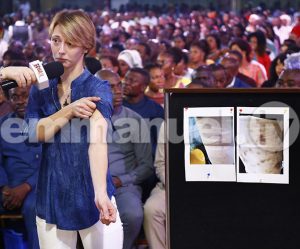 Ms Amanda Brown, from the USA, grew up in a Christian home but her relationship with God turned sour once she hit 14 years of age. Facing difficult challenges, she turned her back on her Creator. Possessed by an evil spirit, she would oftentimes cut herself with razors and sharp objects, drink herself to stupor and take and sell hard drugs, deriving pleasure in doing such even when it landed her in mental hospitals. Deeply involved in satanic practices and carried away by the evil spirit that plagued her life, she would hear voices in her head telling her to attempt suicide, which she did on multiple occasions.

In desperate search for help, she looked online and came across Emmanuel TV. What amazed her the most was the unconditional love demonstrated by T.B. Joshua and the Emmanuel TV Team as they reached out to a troubled world. Seeing the evidence of God at work, she made a heart decision to reconcile with her Creator and as she continued to watch Emmanuel TV, she experienced deliverance as the desire to self-harm and take drugs was replaced by a gentle peace and joy.

Today, Amanda is free and in her right mind. While testifying to God’s work, she advised us not to see God as our enemy, for He loves us and wants the best for us.

MEDICAL MACHINES A THING OF THE PAST 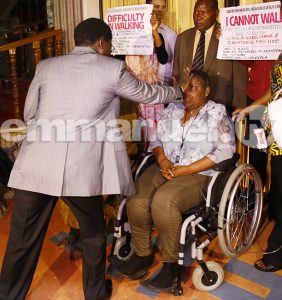 Ravaged by lupus, Ms Margaret Muyalo was dependent on an oxygen machine and had to be wheeled around. Her lungs were unable to produce enough oxygen and so her whole system was gradually collapsing.

Once an active ranger in the wildlife sector, Margaret saw herself stripped of dignity as even a trip to the bathroom became a complicated process which required assistance. She had a large oxygen machine at home as well as a mobile one which would accompany her anywhere she went in her wheelchair. As the lupus continued to eat away at her system, Margaret’s father employed a nurse and decided to take his daughter to the feet of Jesus for a miracle. Speaking of how they came to The SCOAN, her nurse explained, “She was in a critical condition. She was on oxygen, on a wheelchair. It was very difficult”.

It was God’s appointed time for Margaret as Racine approached her and gave her a word of prophecy, taking her back to her active days as a ranger when she swam in a river and the problem started.

Shocked at the revealing truth of the prophecy, Margaret opened her heart to God and as Racine prayed for her, she began to vomit out all the 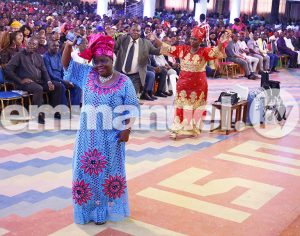 devil had planted in her. Next she was detached from the oxygen, stood up from her wheelchair and began to walk freely.

Today, Margaret is a perfect picture of the woman God created her to be. “I had been told my sicknesses were incurable but I believed there was nothing incurable for God.” Today she is healed and in her own words, “I moved from a wheelchair to the top of the Altar!”

She advised all listening, “Trust in God. Faith is the most important thing in every challenge you face.”