CHEER UP AND CHOOSE JOY - The Synagogue, Church Of All Nations - SCOAN - Prophet T.B. Joshua (General Overseer) Skip to content 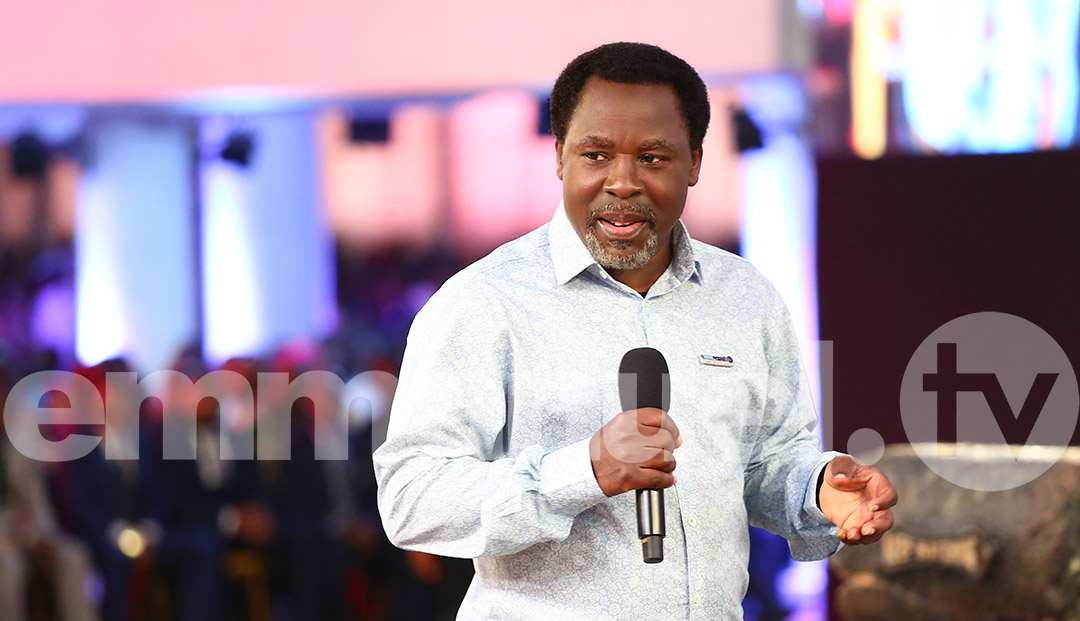 The joy which spread throughout The SCOAN Live Service on Sunday seemed to hold no bounds. Congregants danced with all their might, being propelled by the songs rendered by the SCOAN choir.  In his message CHEER UP AND CHOOSE JOY, Chris illustrated how destruction can so easily come into our lives when we allow sadness into our hearts. “Our joy is for a moment. Our happiness is for a second. We so often seem to have happiness or joy dependent on our circumstance, dependent on our situation”.  Direct and to the point he said, “I am here to warn you about the dangers of sadness. Whenever you are sad, the devil is at work”. Speaking further on the dangers of sadness, he said, “A sad heart is the devil’s workshop. He can manoeuvre, he can manipulate, he can sow his seeds of chaos, destruction, division, discord. He has free reign in your heart as far as you are sad. When you harbour sadness in your heart, you filter everything through it.” 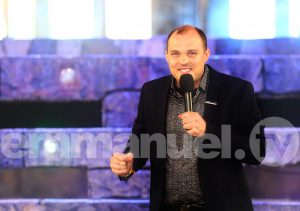 He referred us to the Gospel of John 15:11 – “I have told you this so that my joy may be in you and that your joy may be complete”. Emphasising on this, he said that joy is something only believers have because joy is a fruit of faith. He revealed the secret of conquering sadness. “Anytime satan wants you to cry, begin to laugh. This is the greatest embarrassment you can give to satan – to ignore his existence”, he said. Chris encouraged all to take a leaf from Paul and Silas – in the face of life’s challenges, life’s ups and downs begin to sing and praise God. He further stated, “As a Christian, out of those ashes, beauty will come. Beyond that trial there is triumph. Beyond that scar, there is a star. Beyond that mess is a message”. In his concluding statement, he referred us to John 16:33 stating, “In this world, you will have trouble but cheer up. Take heart. Choose joy because you will overcome. Don’t let anything rob you of joy. Joy is our conquering power. The joy of the Lord is our strength”.

Earlier during the service, people shared testimonies of how their lives had been transformed by the power of God after receiving their miracles in Jesus’ name. Below are a few of those that were shared:

I THREW AWAY MY NECK COLLAR 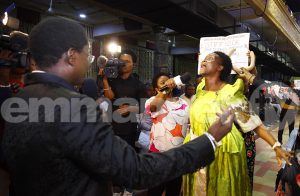 “The crown has been removed,” the man of God revealed in a prophecy as he stood before Mrs Robinah from Uganda who was awaiting prayer for the problem of a stiff neck due to cervical spondylosis and disc prolapse. He further prophesied that she had gone to a spiritualist and underwent a ritual in which something was rubbed on her head. It was at that point that the evil spirit entered her and her problem of stiff neck began.

As he stretched forth his hand in the name of Jesus Christ, the evil spirit was cast out, the neck collar was removed and Mrs Robinah exercised her neck, demonstrating that she was completely healed! Relief has replaced two long years of agony and she testifies that she is healed and remains free since the moment of her healing. 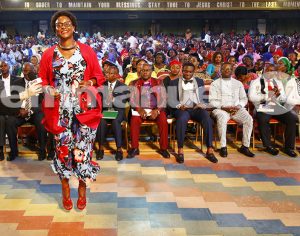 Joyfully, she advised the congregation: “God is the Healer, not a healer. He is the same yesterday, today and forever – put your faith in Him!”

STRENGTH FOR THE DAY AND SLEEP AT NIGHT 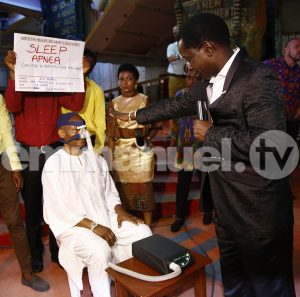 For 20 years, Mr Tapsen from Germany was tormented with sleep apnea. He could not sleep and when he finally did, he would wake up feeling very weak. By noon, it would feel as if he had worked for ten hours. His fellow colleagues in his office advised him to retire early. He had gone to many hospitals in search of a solution but the doctors just gave him a breathing machine and prescribed seven different medications for him to take daily. They told him that he would have to live with the condition. Mr Tapsen decided to come to The SCOAN believing that Jesus Christ would put an end to his problem. When the man of God approached him, he prophesied that there was a problem in his marriage and that people had tried to discourage him from coming to The SCOAN. He instantly confirmed the prophecy and as he received prayer, he felt as if a vacuum had left his chest. 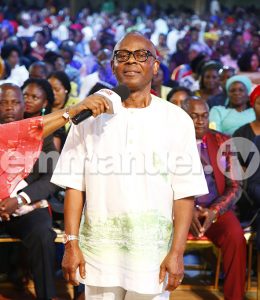 To the glory of God, he has been set free from the bondage of sleep apnea! He no longer needs the breathing machine at night as he can now breathe freely and has strength throughout the day.

I AM GOING BACK TO GERMANY WALKING FREELY 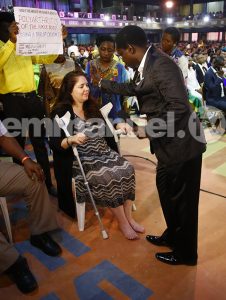 Mrs Gigi Greiff, from Germany came to The SCOAN with the problem of polyarthritis of the body. Unable to move, walk or bend, she came to Nigeria in a wheelchair. With a pair of crutches, she could barely gain her balance. She couldn’t use the toilet unless supported by her husband or daughter. Pain and grief engulfed her as she was unable to find relief despite all the money she spent.

Mrs Greiff had been to several hospitals in Germany in search of a cure but according to her, “It was very difficult for the doctors to find a cure”.

As soon as she heard about the wonderful happenings at The SCOAN, she was motivated to attend one of the Sunday services. Positioned for a touch, she received her instant healing. “I felt healed instantly”. 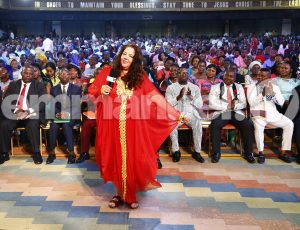 Not only did she receive her healing, she was also given a word of prophecy, “Your people don’t believe in God”. Now able to walk, she shared her testimony in German language for her people to believe that there is a God who heals and she is indeed a partaker.

THE BEAUTY OF MY HEALING FROM SPONDYLOSIS 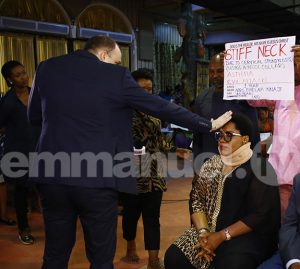 Mrs Thelma Nnaji came all the way from Imo State, Nigeria with the problem of a stiff neck. She narrated that her ordeal started after going for a walk. On this fateful day, she discovered that she was losing her breath after the walk and complained to her husband. After a while, she realised she could no longer lift her legs and almost passed out.

In search of a solution, she went to several hospitals and had to undergo several tests. The doctors could not diagnose the problem; they recommended an x-ray and an MRI scan. The scan showed that she was suffering from spondylosis and a neck collar was proffered as a temporary solution.

The neck collar accelerated the pain in her neck and shoulder. This meant that she could no longer carry out her responsibilities as a wife and mother.

She decided to seek the face of the Mighty Healer, our Lord Jesus Christ and decided to visit the SCOAN. The man of God ministered prayer to her and instantly she felt free and her pain became a thing of the past. Her husband also confirmed her ordeal and complained bitterly that he had to take on her responsibilities within the home. 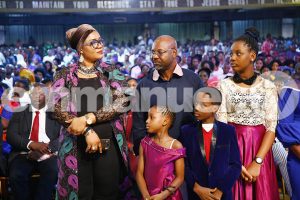 Mrs Nnaji, thanked God for restoring her to her original position in Christ and advised viewers across the globe to hold onto God and wait patiently for the right time. In God’s time, everything is beautiful and there is healing at God’s appointed time.

The man of God brought the service to a close following a powerful prayer for the viewers and all those who connected by faith, in Jesus’ name will indeed have a testimony to share!