PRAYER IS A WORK OF FAITH - The Synagogue, Church Of All Nations - SCOAN - Prophet T.B. Joshua (General Overseer) Skip to content 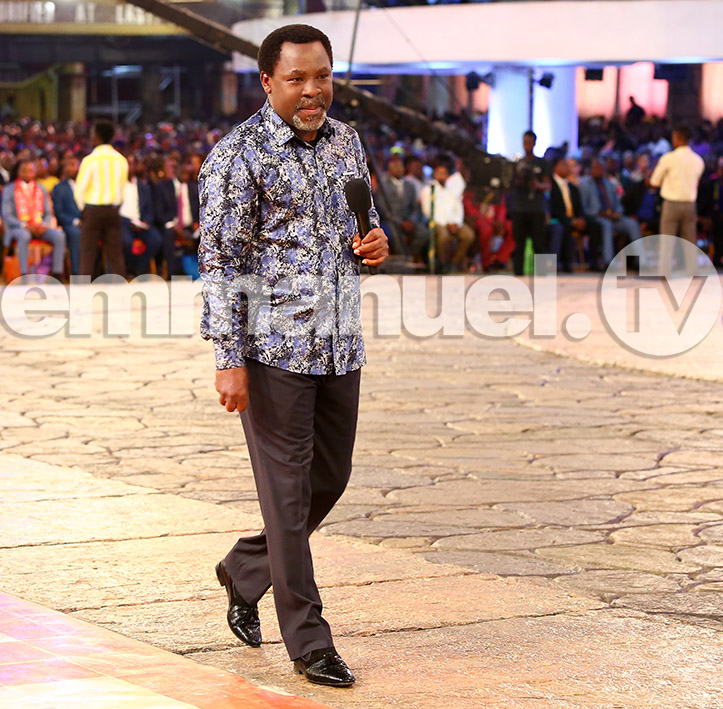 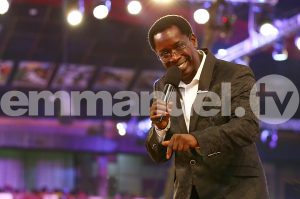 The glory of God radiated in The SCOAN as Racine mounted the altar, sharing his life experience as a case study and diving straight into the message: Focus on God.

Using Hebrews 12:1-2 as his proof text, he read, “Therefore we also, since we are surrounded by so great a cloud of witnesses, let us lay aside every weight, and the sin which so easily ensnares us, and let us run with endurance the race that is set before us, looking unto Jesus, the author and finisher of our faith, who for the joy that was set before Him endured the cross, despising the shame, and has sat down at right hand of the throne of God.”

Shedding more light on a Christian’s need to depend on God and not their troubles, he asked this thought-provoking question, “What does Jesus see when He looks at you?”. He added, “You are what you give your attention to. What you look at affects your thoughts. A man’s life is what his thoughts make it. When you focus on God, you are indeed what God says you are and you have what God says you have”.

Now, what could be our greatest achievement on earth? Could it be wealth, power or fame? No! Reminding the congregation of Prophet T.B. Joshua’s latest message, Racine said that the greatest achievement on earth is to pray as God wants us to pray. When you do, you will want what God wants, you will want it for the reason God wants it and whatever you ask shall be provided. One is rewarded when one prays, loves, looks and smiles in faith. The Spirit of the Father dwelling in your heart will enable you to cry naturally, “Abba! Father!”

Racine conclusively encouraged the congregants to neglect the thought of failure which has eaten deep into the thoughts of many Christians, thereby corrupting their belief system. “What you regard as failure is not failure at all from eternity’s perspective. You need to know what God says about you. It is hidden in you – discover it.” 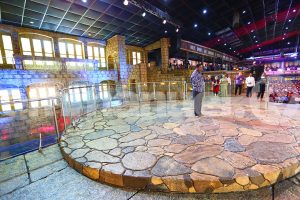 Moving straight to those sick and afflicted inside the auditorium, Racine stretched forth his hand in the name of Jesus and the miraculous took place. Souls were touched, lives were transformed, the lame could walk, the sick were healed and broken hearts were restored. As the congregation rejoiced in the goodness of the Lord in the land of the living, Prophet T.B. Joshua came forward with a powerful word of prayer:

“Prayer is a work of faith,” the prophet said. “All things are possible; have faith in God. This means, only faith counts.” Continuing his exhortation, he said, “Today, many of us pray but perhaps not the prayer of faith. Faith comes when we allow the Word of God to dominate our heart, spirit.” As the congregation received the Word from above, the man of God continued, “I can sense God touching you right now. Say to the Lord, ‘Touch me!’ Let all evil spirits in your life, leave, in the name of Jesus! Spirit of stagnation, failure, setback, barrenness, affliction, leave, in Jesus’ name! I 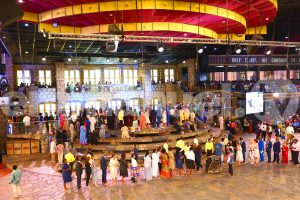 cover your life with the blood of Jesus.”

As the manifestation of God’s glory and power was revealed in The SCOAN auditorium, Prophet T.B. Joshua announced that God had instructed him to open the altar for those in the congregation. As they flocked to The SCOAN altar to pray, the power of God continued to manifest in mighty deliverance and healing. It was a service to remember.

Below are some faith-building testimonies that occurred in The Arena of Liberty: 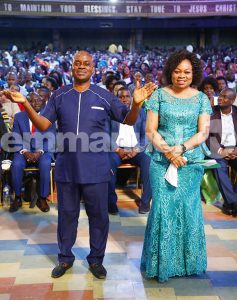 For more than a year, Mr Paulinus Okafor battled with a bone tumour in his right femoral shaft which led to difficulty in walking. Several tests and treatments were advisedly undergone but the problem remained. His quest for a cure drove him to native doctors in a desperate search for solution. One would think that his problem would finally come to an end but it only grew worse. 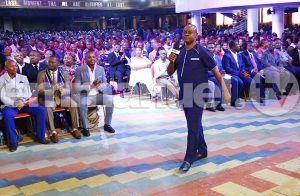 and the only solution to his predicament was to undergo an operation. Not only had he spent all his money on hospital bills and pills, he had to depend on his wife for virtually everything. His business was at the verge of collapsing and money became an issue.

He began to think that life was unfair to him but when he came to The SCOAN, everything changed. Through a prophetic message, he realised the root cause of his problem. “You stepped on poison,” said the man of God. After confirming the prophecy, he received a touch from Jesus and started walking to the glory of God.

His wife, Mrs Okafor was not left out as she was also delivered from the spiritual husband that plagued her marriage for 11 years and had left her barren. Having been through such discomfort for a long time, she was finally set free in The SCOAN, in Jesus’ name. Now freed, Mr Okafor advised all to seek the face of God because nothing is impossible with God. Indeed, we serve a miraculous God who can change our story to glory and our grief to relief.

NO LONGER A SLAVE TO DISCOMFORT! 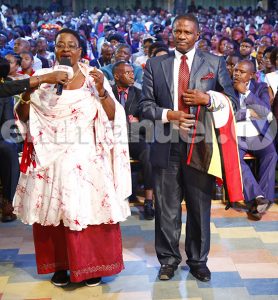 Mrs Esther Barugahare from Uganda lived a life of embarrassment, discomfort and agony. For 20 years, the 60-year-old woman had been a victim of severe constipation due to recurrent hemorrhoids. She recounted the discomfort and painful experience she had to live with throughout the 20 years of her ailment. She underwent two major surgical operations 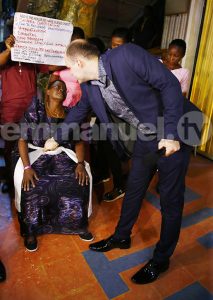 but both failed to alleviate her problem. Unable to defecate naturally, she was forced to mix colon irrigation solution into a large container of water, hang the container above her and use a tube to push the solution manually into her bowels. The excruciating process seemed to last endlessly but consequently, after about 15 minutes, she would be able to release stool. This terrible ailment not only affected her own life but her marriage as well as she felt she had become a burden to her husband. Her quest for freedom and healing drove her to The SCOAN and by God’s grace, she was positioned for a touch. Not only did she receive prayer but prophecy as well as the man of God revealed the root of her pain. Then, a mighty healing took place and instantly, she was free! Moments later, she rushed to the toilet and began to defecate naturally, with no outside aid. Sharing the video for the glory of God, Mrs Barugahare and her husband exclaimed the liberating power of Jesus Christ. She told the congregation how relieved she felt to be able to stool like a normal person. With gladness in her heart, she advised the congregation to have faith and come to God for their healing and deliverance.

I CAN HEAR! VIETNAMESE PASTOR TESTIFIES 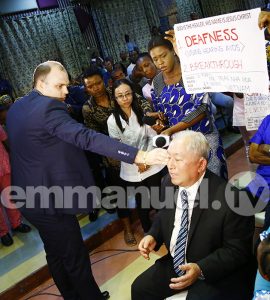 Pastor Tran Nha Hoa, a Vietnamese, battled with an issue of deafness which nearly compromised his duties as a pastor. Communication with his members seemed a difficult task as he was unable to deliver in terms of prayer and counselling. “I had a big problem to communicate with people that came to me for prayer and counselling. My wife had to take up the whole work”. To curb his problem of deafness, he was given hearing aids as the doctors were unable to find a permanent solution to his predicament.

Witnessing the blind receiving their sight in The SCOAN, pastor Tran Nha Hoa yearned to be a partaker of God’s healing. He journeyed down to The SCOAN and as the man of God was ministering healing and deliverance, he located him in the congregation. A tap on both his ears made pastor Tran Nha Hoa feel an electric current pass through his ears. Lo and behold, after immediately removing his hearing aids, he could hear! His resounding words, “I can hear!” filled the auditorium and a shout of praise filled the atmosphere, giving glory to God. Pastor Tran Nha Hoa advised viewers worldwide that as Jesus healed him, He would heal them, too. 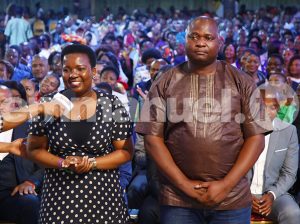 Right in The SCOAN, Mrs Amanda Lebepe received a touch from the man of God that led to the manifestation of the evil spirit within her. “I am the spiritual husband,” were the words of the spirit that had plagued her life for years.

Mrs Lebepe was known for her aggressive nature and her husband was often the target of her anger. This had an adverse effect on her marriage as her husband preferred the company of strangers than that of his wife. “I had to undergo volatile situations because of her. When she was angry, she became too bossy and uncontrollable”, he said. As the affection gradually faded 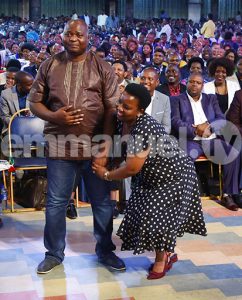 away, the only thing they could agree on was divorce.

Quick to realise that their marriage was plagued by a spiritual force, they decided to seek the face of God in The SCOAN where, to the glory of God, Mrs Lebepe was prayed for and the spirit that tormented her life and marriage was disgraced and cast out.

Evidence to her total deliverance, she vomited poisonous substances that had been deposited in her body by the evil spirit. Now a changed person, she testified that her love for her husband waxed stronger and the thought of divorce was now a thing of the past.

As you share these testimonies with others, may your blessing, healing, deliverance and freedom be sealed by the blood of Jesus Christ!