THE GREATEST ACHIEVEMENT ON EARTH - The Synagogue, Church Of All Nations - SCOAN - Prophet T.B. Joshua (General Overseer) Skip to content 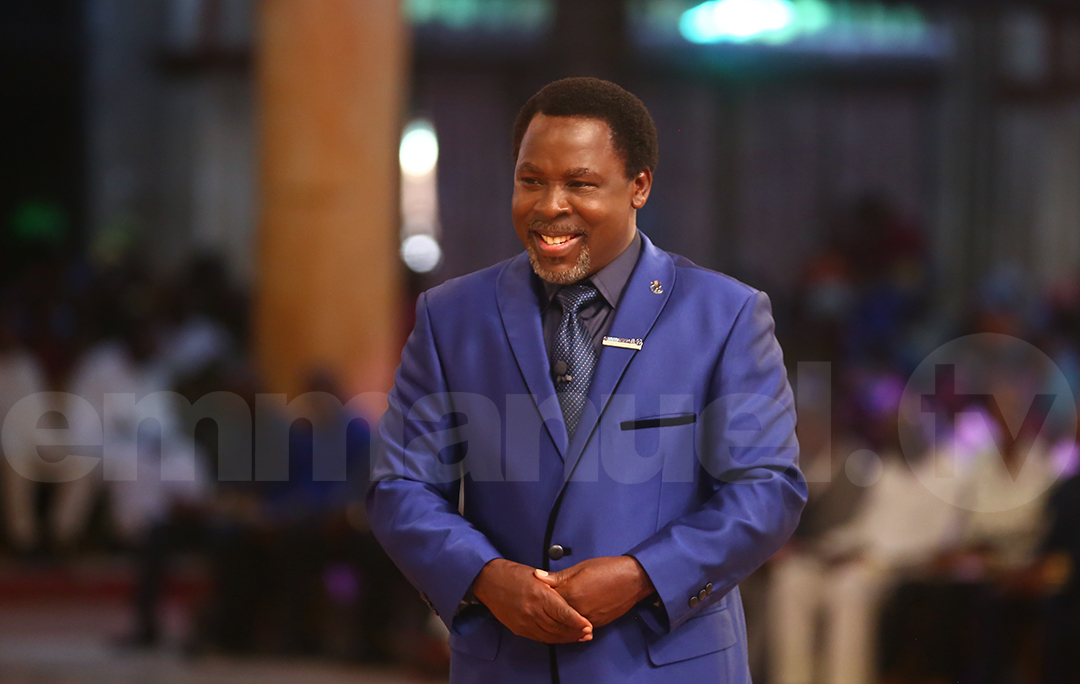 The atmosphere at The SCOAN was charged as the congregation worshipped God in Spirit and in truth, assured that their case would not escape the anointing of the Almighty God.

Prophet T.B. Joshua began the sermon with a soul searching question directed at the congregation and viewers all over the world, “What is the greatest achievement on earth?”

In answer to the question, the prophet explained that whatever we claim to have achieved, we are still struggling with peace and joy but “As for me and my household, the greatest achievement on earth is to pray as God wants us to pray”.

Referring to the Scriptures, Romans 12:1-end, Daniel 6:10, 1 Corinthians 14:14-end, Acts 2:4, Job 11:13-19, Galatians 4:6, he explained that such life of prayer comes at a cost, that it demands sacrifice. Talking of the great heroes of faith, he said that all prayer saints have spent hours every day in prayer because prayer is a lifestyle to them. 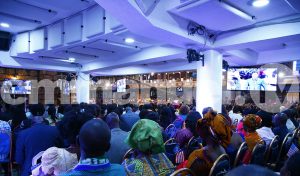 The man of God went on to say that prayer is a relationship that exists between God and His children. This means that you must have a relationship first before praying. Encouraging the viewers and the congregation to examine their relationship with their Creator, he reiterated that our heart is the communication point with God.

In a profound explanation, the prophet explained that our heart refers to the inner man – the man himself. It is the seat of desire, will, emotion, wisdom, knowledge, conscience and moral character. It is the fountain of all he does. God is interested in the state of your heart – the man himself. In conclusion, the man of God said that if you truly believe in your heart, your character will reflect your faith.

COMRADE CURED FROM DIFFICULTY IN WALKING

Suffering from difficulty in walking due to lumbar spondylosis for 20 years, Comrade Neville Tobi Abiamowei experienced a lot of pain. It was extremely difficult for him to climb stairs and to generally get around. Mr Abiamowei’s finances also dwindled when he faced salary reduction due to the fact that he could not fully function on the job.

He had been to many hospitals in search of solution but to no avail. The pain was so unbearable that he decided to also visit a native doctor who advised him to bath with chicken blood as part of a spiritual ritual. In the aftermath of his visit with a spiritualist, his health condition deteriorated the more. “I went through hell,” recounted Comrade Abiamowei. 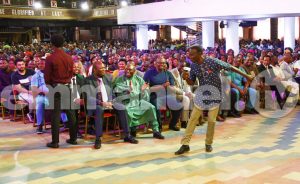 Watching Emmanuel TV daily increased his faith that God would surely heal him. All the way from Bayelsa, Comrade Abiamowei made his journey to The Synagogue, Church Of All Nations with faith in his heart that he would be completely healed.

True to his faith, as Prophet T.B. Joshua prayed for Comrade Abiamowei, the healing power of God fell upon him and uprooted the root cause of his problem. The lumbar corset was removed permanently and he started walking freely without feeling any pain, to the glory of God. Indeed, faith is the transformative power of the universe – the power of change – a change from sickness to good health, from test to testimony. 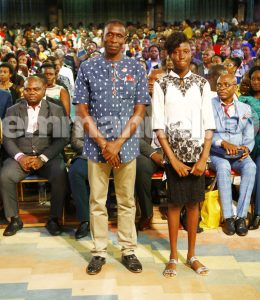 Comrade Abiamowei went on to advise all listening to him to believe that as God has solved his problem, the same God will also solve theirs, in Jesus’ name. 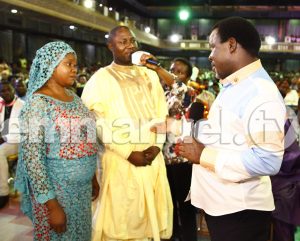 Right after Peter and Gladys exchanged the marital vows and went home as Mr and Mrs Philemon, a demonic spirit invited itself to joining the couple in their matrimonial home. Mr Philemon Peter used to experience a dream in which he would see another man between him and his wife. Recounting how such nightmarish dreams robbed him of the joy of marriage, Mr Philemon Peter said he usually woke up boiling with anger that he vented on his wife. This led to repeated domestic violence towards her and his household never knew peace. Apart from the incomprehensible notion that he saw his wife as a man trapped in a stubborn woman’s body, he was also seriously irritated by the most trivial of issues. Arguments and fights became descriptive of their marriage. With no affection in existence between the pair, Mr Philemon started to prepare himself towards marrying another woman as a premise to get rid of his marriage. 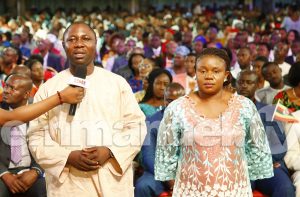 The Philemons, from Kaduna, visited The SCOAN last Sunday and during the service God located them through a prophecy Prophet T.B. Joshua gave to the couple. When Prophet T.B. Joshua asked Mr Philemon about his wife and stated that there was no affection between the couple, they both knew God’s time to restore their marriage had come. They were both delivered in the name of Jesus Christ, and the Philemons returned to The SCOAN the following Sunday to share their testimony to the goodness of God in their marriage. 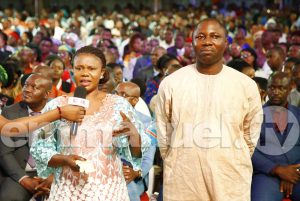 Advising the congregation and viewers all over the world not to give up during any challenges life presents but to turn to God at all times, Mr Philemon confessed that he now sees his wife as a beautiful woman. 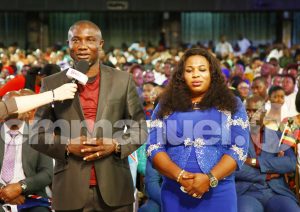 Mr Chekwas Okonkwo came to The SCOAN with a burden in his heart – he and his wife were on the verge of divorce. As Prophet T.B. Joshua was moving round in the midst of the congregation, he prophesied to his life and told him there was a secret he had been keeping to himself. The man of God then prayed for Mr Chekwas and the demonic spirit that had used him as his tool to commit all types of shameful acts began to manifest. He received his deliverance, in the name of Jesus. Following this, Mr Chekwas’s wife also visited The SCOAN the next Sunday and to the glory of God she also received her deliverance from the spiritual husband that caused her to rant non-stop whenever she had any slight argument with her husband or people around her. 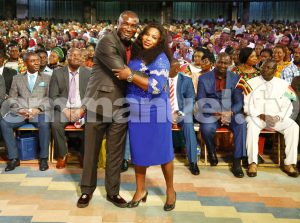 Testifying to the congregation and viewers all over the world, Mr Chekwas said he had been battling with the spirit of lust that would make him go around befriending various women. He cleverly hid these lustful activities from everyone around him. Besides not having affection for his wife, he fought her at the slightest provocation. He said even when he tried to caution himself, this evil spirit would rear its ugly head whenever he sighted any beautiful woman about. When he saw his marriage going down the drain, he desperately started seeking for deliverance and that was how he came to The SCOAN and received his deliverance. After his deliverance, Mr Chekwas testified that the affection is back and their marriage has been restored.

Mrs Ifeoma Chekwas also testified that there is now understanding, peace and affection in her marriage. She now loves her husband more than ever.

DEBTS WIPED OUT AFTER PRAYING ALONG WITH EMMANUEL TV

Huge debts caused Mr Hugh Mtshali’s blood pressure to shoot up to such high levels he was hospitalized for one week. One of his long-standing businesses had gone into debt after a decade of issues hitting his manufacturing company. As a caution, Mr Mtshali had called in third party agencies to cross-check the products he had produced. They tested good. After discussing with his business partner, Mr Mtshali concluded that an evil attack was behind the strange loss in their business that had reduced his enterprise into hugely cumulative debt over the years. That was also the same time Mr Mtshali was introduced to Emmanuel TV and after listening to various testimonies, Mr Mtshali was inspired to place his letters of debt on his television screen as Prophet T.B. Joshua prayed for viewers of Emmanuel TV. He felt an ‘energy’, which he knew was the power of God, go through him. After that, Mr Mtshali was assured within him that everything would be okay.

And indeed a few days later, he received a letter from the bank that his debts had been cancelled. He also received another good news that he had been selected as a beneficiary of a new business initiative. The bank was just waiting for his signature to agree for his debts to be cancelled and to join a new business venture – something he had not even applied for. Today, his debt is zero after God intervened and turned everything around.

Mr Mtshali advised business gurus and all others to give the Living God a chance in their lives as ‘He is more than able to exceed your expectations’.