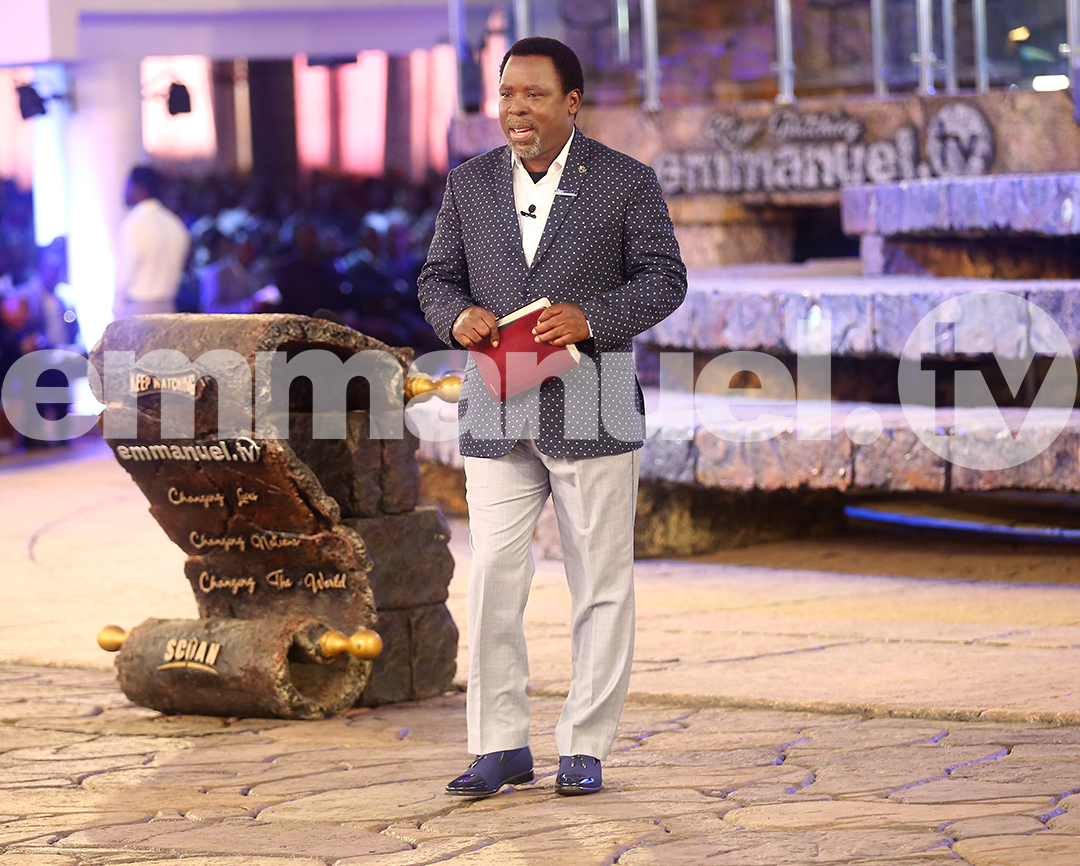 Prophet T.B. Joshua introduced a remarkable and life-changing message titled, ‘God Cares About Little’ with revelations of what God expects from us as children of God. Enlightening the congregation with the Word of God, he explained the above title using the proof text, Matthew 19:21-22. “Today, we all believe that we can only give out of abundance, excess, plenty, surplus because we are used to giving out only what we don’t need, what we have used, the left-overs in our store. Whatever you give out of little, it means a lot to you and it attracts God’s attention because it is what you cherish most – what your life depends on (Mark 12:42-44).

Below are some soul-lifting testimonies that will motivate us to appreciate the little God has given us.

Mr Kalejaiye Michael, was one of those victims who suffered from the problem of a stiff neck due to cervical spondylosis coupled with discal degeneration and multi-level degenerative disc disease which had spread throughout his body, making his mobility difficult. Barely unable to walk, he had to live his life attached to his neck collar and walking stick. 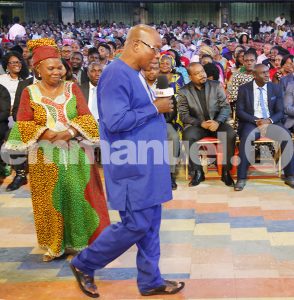 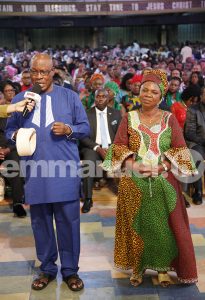 After consuming enough medication which apparently gave no solution, Mr Kalejaiye resolved to visiting herbalist homes in search of a cure but all proved abortive. Running around in circles, an operation was the only option the doctor could offer.

In excruciating pain, Mr Kalejaiye found his way to The SCOAN to seek the face of God. As Prophet T.B. Joshua approached him, he prayed for him in the awesome name of Jesus Christ. Mr Kalejaiye felt a knot in his neck and instantly, he could turn his neck without any pain. His neck collar and walking stick were bade goodbye! Now healed, he demonstrated in The SCOAN things he could barely do without the walking aid and neck collar to the glory of God.

A TOUCH THAT CHANGED EVERYTHING

Mr Daniel Julius, came face to face with an affliction that compromised his profession as an IT expert – difficulty in walking. Unable to sit, walk, or stand for long, due to degenerative changes in the vertebrae, his mobility was restricted. Having exhausted his visits to many hospitals and declined a surgical operation that promised no solution to his ailment, he decided to seek the face of God by visiting The SCOAN. 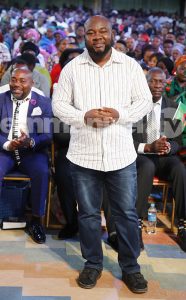 Recalling his experience in the arena of liberty, he shared with the congregation how a touch from the prophet had changed his life. As soon as the man of God, Prophet T.B. Joshua prayed and touched him, he felt a relief and began to walk immediately. Standing, sitting, exercising his body and other physical activities that were once a daunting task had become history. 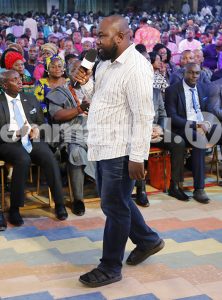 Demonstrating his total freedom by walking and exercising his body, Daniel also told the congregation that he could drive without any difficulty. Amazingly, not only was he delivered from difficulty in walking, he was also set free from the bondage of alcohol addiction that had consumed him for five years.

Speaking of how he was delivered from alcoholism, he recalled that as soon as he began to pray with Prophet T.B. Joshua through Emmanuel TV, his addiction to the bottle ended. He added that the mere sight or smell of alcohol irritated him. Career breakthrough also came his way as contracts began to pour in to position him for a success, to the glory of God.

Advising the congregation, Daniel encouraged all to build faith, believing that distance is not a barrier to what God can do in one’s life.

The Lord proved Himself mighty in the life of Mr Matthew Otobo who fell prey to spiritual forces. Forty-two-year-old Mr Otobo was attacked in a hotel room by a strange uninvited woman whose aim was to destroy. He recounted that the strange woman approached him with a smile on her face and flames all over her body. This frightened him greatly and he soon realised that he was involved in a spiritual battle. Rebuking the woman in the name of Jesus, he ran outside only to discover that the hotel was locked and void of attendants – there was no one in the hotel except him. 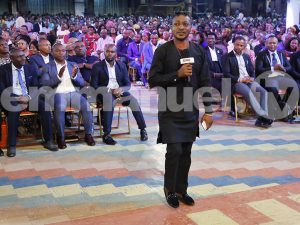 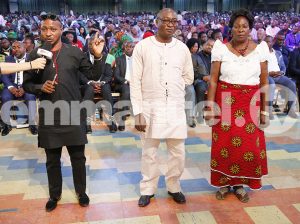 Terrified by this unexplainable situation, he jumped through the window and ran as fast as his legs could carry him. While running, he encountered another group of people who eventually captured him. Through the name of Jesus, he was able to escape but was afflicted with a swollen leg which rendered him immobile.

As his leg continued to swell, it began to rot. Perplexed by this strange incident, he was rushed to hospital for treatment but his body kept rejecting the medications he was given. No one, including doctors, could pinpoint the problem he had with his leg. As his condition worsened, his family realised that Mr Otobo’s case was a spiritual one. He was advised to leave the hospital and travel to Benue State. His friends helped with the travel arrangements.

Having sought medical treatment and spiritual advice with no way out, Mr Otobo decided to visit The SCOAN. Positioned for healing at the prayer line, he was healed and delivered the instant he was touched by the man of God. He dropped his crutch and started to walk to the glory of God.

He advised the viewers and congregants to run to God whenever they faced any problem remembering to call on His name as the name, Jesus is powerful indeed.

Mr John Ackah Sampson’s dream was almost trodden but when God stepped in through the ministration of the New Morning Water, everything changed. Over the years, Mr Sampson had lost almost everything. His dream had always been to work in the aviation industry. At 19, he secured his first job and by the time he turned 24, he had become a flight operation’s instructor and officer at one of Ghana’s renowned aviation companies. 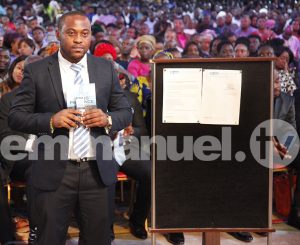 One would expect his career success to ascend but in his case, the opposite was what he experienced. His career and financial life came dwindling after he collected loans from the bank to finance his education and career enhancement. Things became so severe that he resorted to walking into stores to beg for money to feed. “I faced so much stagnation in my career to the extent that every application letter I submitted was rejected,” he recalled.

As soon as he paid The SCOAN a visit, he was privileged to receive the New Morning Water. He ministered it on his rejection letter and soon after, received a letter from the United Nations Mission in South Sudan (UNMISS) offering him the position of an Air Operations Assistant. This job security helped John to pay back the loan and he has been enjoying a better financial life to date, to the glory of God.

FREED FROM THE SHAME OF BEDWETTING

Prophet T.B. Joshua gave a prophecy concerning a woman wearing a red gown who was afflicted with the spirit of bedwetting. With a yearn for deliverance, Mrs Ramat Mercy Emeka Mba rushed forward to confirm the prophecy of which she received a touch from the prophet and was set free. 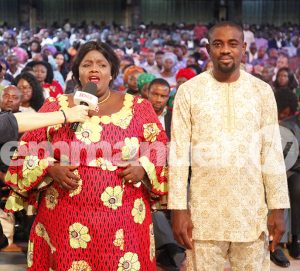 Now free from bedwetting, she returned to The SCOAN to share with the congregation her ground-breaking testimony. With joy and gladness in her heart, she stood to narrate her ordeal before the congregation. She recalled how the spirit of bedwetting had soiled her marital home and crippled her relationship with others. This problem affected her emotionally and she would resort to tears. Her social life was also compromised, restricting her from travelling despite her popularity.

“It is a serious case for a mother to bedwet; a shame and embarrassment to myself because children are known to bedwet not adults,” she said. While she testified, she revealed to the congregation the consequent attacks she encountered in her dream of how a huge man would lie with her. When she would wake up, she would realise that she had wet the bed yet again. 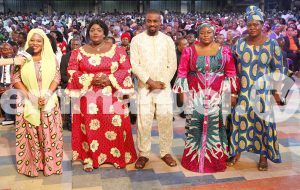 But immediately she received a prayer from Prophet T.B Joshua, she was healed and set free to the glory of God. She added, “When the prophet prayed for me, I felt something heavy left my body. After the touch, I felt light and ever since then, I sleep like a baby. I can even drink much water just to see the difference but I no longer bedwet”.

Her husband, who also received prophecy regarding his addiction to drugs, also added that the urge for drugs and smoking had disappeared after his deliverance.
As a couple, they advised all not to be ashamed of their problem but to come out in search for a solution and put the devil to shame.